U.S. crude oil inventories continued to shrink through the first full week of October, with data from both the American Petroleum Institute and the U.S. Energy Information Administration showing withdrawals and continuing a cycle that has seen net reductions of some 45 million barrels of commercial storage volumes since the first week of July.

In its Weekly Petroleum Status Report released on Oct. 15, EIA showed a decline of 3.8 million barrels for the week ending Oct. 9, along with reductions in gasoline, distillate fuel and propane/propylene inventories. A day earlier, the American Petroleum Institute released its weekly survey, showing a net withdrawal of 5.4 MMbbl. The consensus prediction of market analysts had been a crude inventory draw of 3.4 MMbbl for the week.

Going back to the first week of July, all but four of 15 weeks have registered crude inventory withdrawals (Table 1) according EIA’s tally. API shows 10 of the 15 weeks with net inventory draws. Since late June, commercial crude inventories have been drawn down from 539.2 MMbbl to 489.1 MMbbl based on EIA’s weekly numbers. While still some 50 MMbbl higher than year-ago inventories for the first week of October, the gap has narrowed significantly since mid-summer, when stocks were more than 90 MMbbl higher than during the same time in 2019. 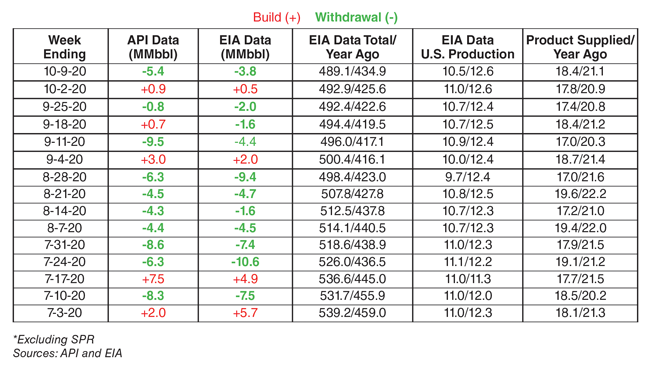 From Labor Day through the end of the first week of October, a seasonal period during which stocks have historically tended to build, EIA reports that inventories declined 9.3 MMbbl. During the same week last year, crude inventories climbed by 2.9 million barrels. In 2018, they grew 6.0 MMbbl.

U.S. refinery inputs averaged 13.6 MMbbl/d, which was up 277,000 bbl/d from the previous week’s average. Refineries operated at 75.1% of their operable capacity, which was substantially below both 2018 and 2019. Refinery inputs averaged 16.2 MMbbl/d and 15.7 MMbbl/d in the first week the fourth week of October in 2018 and 2019, respectively, operating at 89% and 86% of their operable capacity. Both gasoline and distillate fuel production decreased last week, averaging 9.2 MMbbl/d and 4.3 MMbbl/d, respectively. For historical reference, gasoline production averaged 9.7 MMbbl/d and 10.1 MMbbl/d, respectively, in the first weeks of October of 2018 and 2019, and distillate runs were 5.0 MMbbl/d and 4.8 MMbbl/d.

U.S. commercial crude oil inventories, excluding the Strategic Petroleum Reserve, were at 489.1 million barrels, which was 11% above the five-year seasonal average. A year ago, there were 434.9 million barrels in storage. The year-over-year difference of 54 MMbbl of inventory equates to roughly three days’ worth of domestic demand.

In its latest Drilling Productivity Report, EIA forecasts that crude oil production from the “big seven” onshore shale basins will fall 121,000 bbl/d in November, with decreases in all basins and led by the Eagle Ford, Niobrara and Bakken/Three Forks. 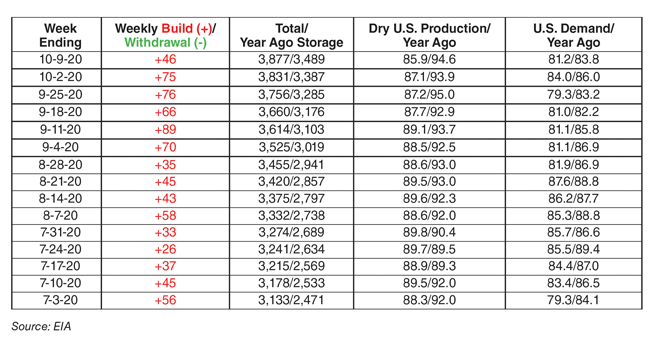 For the week of Oct. 8-14, EIA says total U.S. gas demand slipped from 83.9 Bcf/d to 81.2 Bcf/d, with the biggest reduction in the residential and commercial consumption sector, which decreased 2.3 Bcf/d week over week amid cooler temperatures. Natural gas exports to Mexico were up slightly at 5.9 Bcf/d, and natural gas deliveries to U.S. liquefied natural gas export facilities slipped 0.7 Bcf/d from the prior week as a result of Gulf of Mexico hurricane activity temporarily disrupting LNG facilities and tanker movements.

A total of 12 LNG vessels (four each from Sabine Pass and Freeport, three from Corpus Christi, and one from Elba Island) with a combined LNG-carrying capacity of 42 Bcf departed the United States between Oct. 8 and Oct. 14, EIA reports. The agency notes that the U.S. Army Corps of Engineers reported a sunken barge in the Calcasieu Ship Channel as a result of Hurricane Delta, and that work was ongoing to clear the obstruction to permit large draft vessels access to the Cameron LNG facility and transit the channel. Bloomberg data showed that a vessel was waiting to dock at Cameron as of Oct. 14.

During the week of Oct. 8, EIA estimated that total U.S. dry gas production averaged 89.9 Bcf/d, down from 91.5 Bcf/d from the previous week and down 8.6 Bcf/d from 98.5 Bcf/d on a year-over-year basis. EIA’s models show those declines will continue in November in all major shale basins. In its Drilling Productivity Report, the agency projects gas production will decline by 617 million cubic feet a day, led by the Anadarko, Appalachian and Eagle Ford regions.