HOUSTON–It is coming our way like a freight train. Soon it will slam headlong into historical market dynamics, redirecting critical regional flow patterns and completely altering the way in which the North American natural gas market functions.

The Northeast United States quickly is becoming a net supply region, flipping the flows on north-to-south and west-to-east pipelines, and creating what could be some of the biggest changes in the natural gas industry since Ronald Reagan was president and the gas market was decontrolled.

North American natural gas pipeline flows are about to reverse.

It all means upheavals for prices, storage, basis differentials, and, oh yes–what is going to happen to all those pipelines that move gas to the Northeast today? While it may not be the end of the world for the U.S. natural gas industry, it certainly is the end of the gas market as we in the industry have always known it.

What is the catalyst of such extraordinary structural shifts in the marketplace? Simply put, the Marcellus and Utica shale plays are changing everything. With rocketing natural gas production from the Appalachian region, the new long-term supply dynamics are poised to reverse traditional flows and regional price relationships all across the continent. 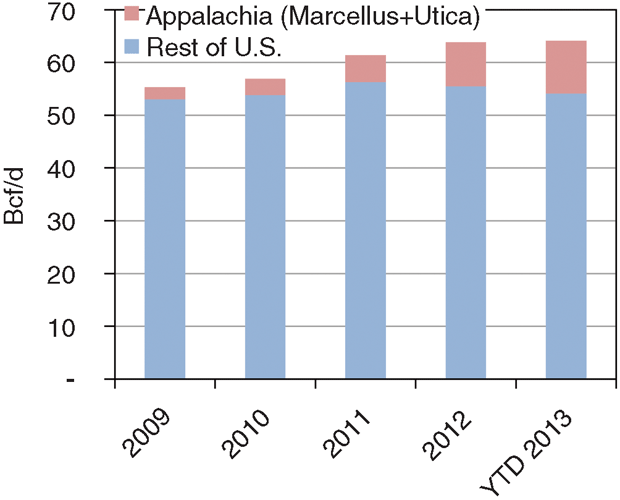 As shown in Figure 1A, lower-48 natural gas production has increased by about 9 billion cubic feet a day since 2009, from 55 Bcf/d to 64 Bcf/d (a 15 percent jump). The red area of the bars reflects production from the Appalachia Basin (mostly from the Marcellus Shale, but with Utica activity starting to contribute), while the blue area of the bars shows the total of all other regions of the United States. Note that Appalachian volumes have increased from 2 percent of the total gas production in 2009 to more than 16 percent in the first few weeks of 2013! 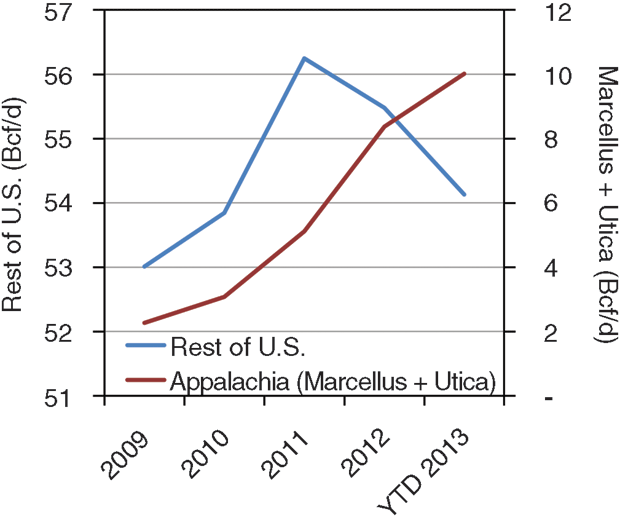 While the format of Figure 1A demonstrates the significant growth rate of U.S. gas production over the past few years, it does not tell the whole story. Figure 1B shows the exact same data on two scales: Appalachia on the right and the rest of the lower-48 on the left. With the data split into two series, it becomes apparent that Appalachian production has grown from about 2 Bcf/d in 2009 to 10 Bcf/d today.

That pace of supply growth in Appalachia shows no sign of slowing. In fact, forecasts indicate Appalachian production will grow by another 7 Bcf/d by 2017 to more than 17 Bcf/d. That projection certainly does not seem out of line, given the 8 Bcf/d regional increase in production experienced since 2009. But if that forecast comes to pass, it will mean dramatic change for the natural gas market, not only in the Northeast region, but across all of North America.

Figure 2 compares the projected 17 Bcf/d in Appalachian gas production to a Northeast demand forecast over the same time frame. The Northeast has the biggest seasonal swing of any market on the continent, from 10 Bcf/d in the summer to more than 25 Bcf/d in the winter. Traditionally, most of the supply needed to meet the winter-time demand load has come from the Gulf Coast region, from the Rocky Mountains by way of Rockies Express (REX) Pipeline, or from Canadian imports. Significant natural gas storage capacity in the Northeast market area helps the industry manage the wide summer-to-winter demand swings. 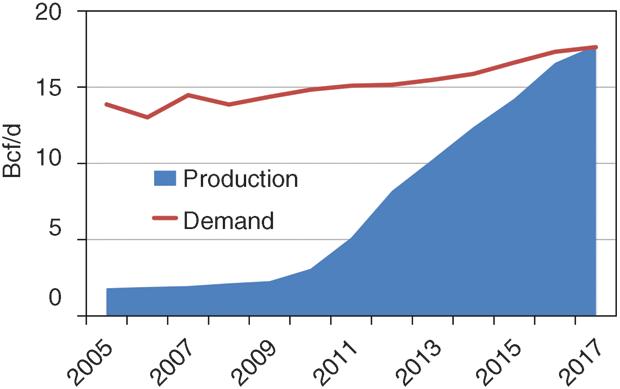 In 2012, average demand over the year was about 15 Bcf/d. By 2017, growth in the gas-fired power generation sector will increase that average to about 17 Bcf/d. And that is the point; 17 Bcf/d in projected demand just happens to equal the 17 Bcf/d in projected supply. So even with growing demand in the region, the Northeast will be essentially self-sufficient in its supply of natural gas by 2017, at least based on supply/demand balance calculations. That would, of course, imply that no gas will need to be transported into the region from the Gulf Coast, the Rockies, Canada or anywhere else, including liquefied natural gas imported from overseas.

This expected balancing of local supply and demand is a true game-changing development. Historically, Northeast demand has outpaced regional supply by 11 Bcf/d-12 Bcf/d, with the huge seasonal demand swing between the summer and winter months. In reality, true self-sufficiency is unlikely to happen by 2017. The pipeline and storage infrastructure in the Northeast region is simply not designed to handle the receipt of 100 percent of it supplies from local sources.

So with enough production to meet regional demand, but lacking the pipeline infrastructure to get all of the gas to the Northeast consuming market, the obvious implication is that surplus supplies will need to move out of the region during periods of low demand (summer) while incremental inflows still will be needed during periods of high demand (winter). These dynamics will result in huge changes in traditional natural gas flow patterns.

Historical sources of natural gas supplies into the Northeast are shown in Figure 3. The most significant volumes traditionally have come from Texas and Louisiana through large interstate pipelines such as Texas Eastern (Spectra), Tennessee (Kinder Morgan), Transco (Williams), and Columbia Gas (Nisource). Gas supply also is sourced from the Mid-Continent and the Rockies through Texas Gas (Boardwalk), ANR (Transcanada), REX (Tallgrass, Sempra and Phillips 66), and other pipelines. 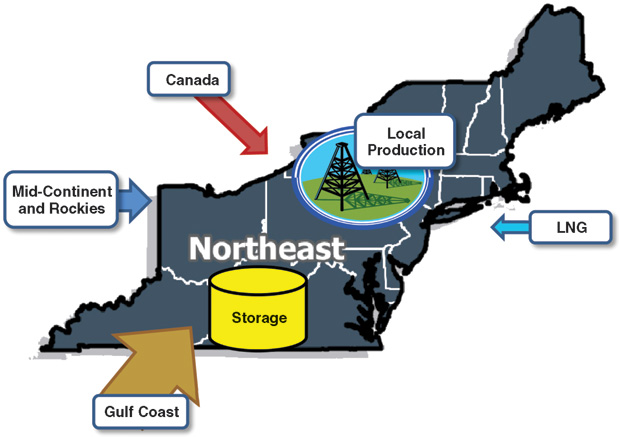 Canadian volumes are shipped to the Northeast through Iroquois (TransCanada), Maritimes & Northeast (Spectra, et.al.), National Fuel (National Fuel Gas Co.), Algonquin (Spectra), and others. Because of the region’s wide fluctuations in seasonal demand, the Northeast has more natural gas storage capacity than any other market. In years past, the region also received significant quantities of LNG through import landing facilities such as the Distrigas terminal in Everett, Ma., and Dominion’s Cove Point terminal in Lusby, Md.

But the entire world of Northeast natural gas supplies and traditional gas flows is about to change. As Appalachian production ramps up, gas supplies from other regions invariably will be pushed out of the Northeast market.

One of the first dominoes to fall will be flows from Canada into the Northeast region. Those flows come in from eastern Canada, even though most of the gas originates to the west in Alberta. At shown in the top right of Figure 4, those Canadian imports averaged 1.4 Bcf/d in 2010-11, spiking to almost 3 Bcf/d during the winter. According to data from the Canadian National Energy Board, flows across the border at Niagara have started to reverse already. In the coming months, this trend will escalate, increasing up to 600 MMcf/d to 1.0 Bcf/d of net outflows by 2017. U.S. gas imports from eastern Canada will have completely flipped to exports. 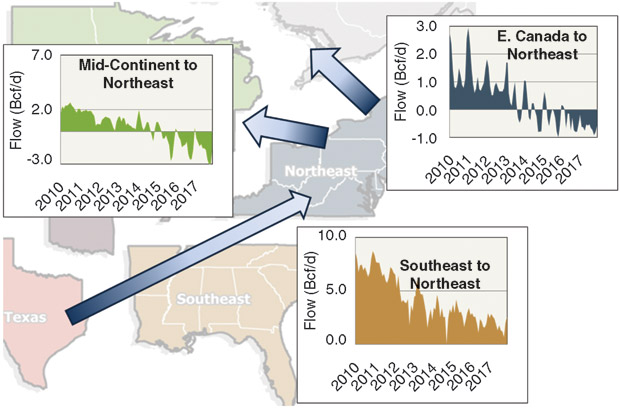 The next inflow expected to reverse will be from the Mid-Continent market region or Midwest into the Northeast. This includes both REX coming across with Rockies gas and pipes such as ANR and Texas Gas bringing flows into systems that traditionally have supplied Appalachia. As shown at the top left in Figure 4, these volumes are expected to reverse from average inflows of about 2.0 Bcf/d in 2010-11 to seasonal outflows reaching 2.5 Bcf/d-3.0 Bcf/d during the winter months.

At that point, gas will be moving west out of the Northeast to supply Chicago and other key Midwest markets. That implies that REX gas will be flowing west, or at least the eastern half of REX. This development should start in 2014, but will not significantly impact the markets until 2016.

From a total volume perspective, the largest shift in flows will be on pipelines in the Southeast (Gulf Coast) to the Northeast pipeline corridor. Traditionally, these pipes have moved 6 Bcf/d-8 Bcf/d into the Northeast, depending on the season. The bottom right of Figure 4 indicates that average inflow volumes will decline annually to less than 1.0 Bcf/d in some months during 2017. Volumes will continue to flow eastward in this corridor because of demand increases and Northeast pipeline infrastructure system considerations. But that situation will not last forever. At some point before the end of 2020, those flows could and probably will reverse.

Volumes flowing east from the western half of the continent are declining, such as those from western Canada into the Mid-Continent (down from 6 Bcf/d to almost zero) and volumes from the Rockies moving into the Mid-Continent (declining slightly). At the same time, volumes displaced from the Northeast in Texas will start moving west into Southwest U.S. markets, and Rockies gas production will increasingly flow into the Pacific Northwest.

In effect, the huge production increases in the Marcellus will drive significant natural gas flows westward. Of course, that is exactly the opposite direction from the flows of about $25 billion in pipeline capacity built during the 2008-10 time frame. Oops!

The “great flow reversal” has profound implications for all businesses operating in natural gas markets and will usher in an era of significant anticipated change that will include:

These are only a few of the changes on the way over the next few years. This will be the biggest cyclical shift in the natural gas business since deregulation. Everything we think we know about the value of natural gas geographically will change. Get ready for a wild ride in the gas market.

E. RUSSELL ‘RUSTY’ BRAZIEL is president of RBN Energy LLC in Houston. He formerly served as vice president of sales and marketing at Bentek Energy, a Platts company. Before Platts acquired the company in 2010, Braziel was managing director of Bentek Energy LLC. During his three-decade career, he has worked as a programmer, analyst, planner and energy trader. He was vice president of energy marketing and trading for Texaco (now Chevron), and vice president of business development for Williams. Braziel also founded and served as president and chief executive officer of Altra Energy Technologies, a developer of energy transaction management software and electronic trading systems. He is a director on the North American Energy Standards Board. Braziel holds a B.B.A. and an M.B.A. in business and finance from Stephen F. Austin University.