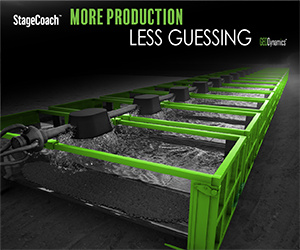 PLANO, TX.–Carbon dioxide enhanced oil recovery has been utilized safely and securely since 1974, but is experiencing a renaissance in the national policy debate over industrial carbon capture, sequestration and storage. From the Obama administration, to national environmental groups such as the Natural Resources Defense Council and leading government and academic scientific organizations such as the Bureau of Economic Geology at the University of Texas, the Massachusetts Institute of Technology, the Southern States Energy Board and the U.S. Department of Energy’s National Energy Technology Laboratory, a common theme is emerging that CO2 EOR will be a significant driver in future U.S. energy and environmental policy.

Denbury Resources Inc. is one company that has taken significant steps over the past decade, and has emerged as a leader in CO2 EOR. The company has strategically positioned itself through a focused acquisition, divestiture and organic growth strategy to emerge as perhaps the largest independent CO2 EOR-focused company in the United States today. 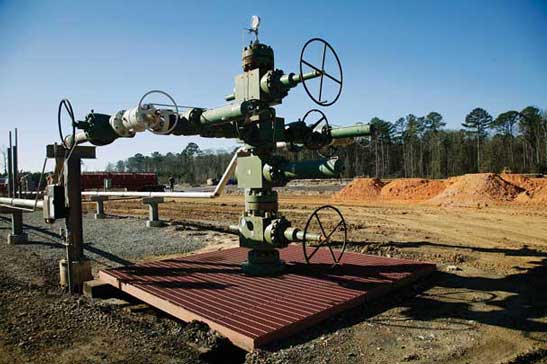 Denbury Resources produces 800 MMcf/d of natural CO2 supply from the Jackson Dome Field in Mississippi, of which it is injecting 700 MMcf/d for EOR. As the company’s inventory of candidate oil fields grows, the need to both collect anthropogenic sources of CO2 as well as to increase production of natural CO2 at Jackson Dome will expand.

Denbury’s divestiture of its Barnett Shale assets, purchase of a 95 percent interest in the historic Conroe Field in Southeast Texas, and its agreement to acquire Encore Acquisition Company for $4.5 billion–nearly doubling the size of the company–has turned heads throughout the industry, and gotten the attention of environmental and governmental policymakers who see depleted and depleting oil fields as a source of significant domestic recoverable oil reserves and a proven “CO2 solution” for industrial carbon capture sequestration and storage.

Nationally, the Department of Energy estimates that of 400 billion “stranded” barrels in place, more than 84 billion barrels of oil in existing U.S. oil fields could be recovered using CO2 EOR. At an oil price ranging between $50 and $100 a barrel, it is economically feasible to recover 39 billion-48 billion barrels. In the Gulf Coast region and in the northern Rockies–Denbury’s two main operational target areas–recovery estimates range from 3.4 billion-7.5 billion barrels and 1.3 billion–3.2 billion barrels, respectively.

In most U.S. oil fields, about one-third of the original oil in-place is recoverable through primary and secondary recovery methods, increasing to 50-60 percent with CO2 EOR. Denbury is producing approximately 30,000 gross barrels of oil a day from its Gulf Coast assets.

The size and scale of candidate oil fields are important in the new world of deploying large volumes of continuous industrial CO2. Denbury’s acquisitions of the Conroe and Hastings fields in Southeast Texas are a good case in point. Hastings, a field that once produced 75,000 barrels of oil a day, now produces less than 3,000 bbl/d, but has the potential to produce 10 times that amount with an ultimate estimated recovery of 50 million-90 million barrels under a successful CO2 injection program. This field serves as the termination point of Denbury’s Green Pipeline, and is the financial workhorse behind the pipeline project and the hundreds of millions of dollars to implement the CO2 EOR project, which includes constructing the CO2 separation and recycling facility.

Conroe, a legacy asset north of Houston, has a preliminary estimated net potential recovery of 125 million barrels of oil from successful CO2 tertiary recovery. An 80-mile pipeline from the Green Pipeline will be needed, as well as $750 million-$1 billion in development expenditures to rejuvenate the field. 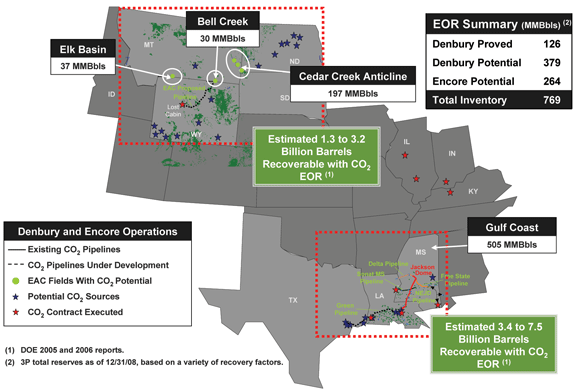 Denbury’s pending purchase of Encore Acquisition Company adds more than 260 million barrels of recoverable oil from CO2 EOR and strategically matches potential anthropogenic CO2 sources in proximity to targeted oil fields (Figure 1). By making the thrust into Wyoming, Montana and North Dakota to develop mature legacy assets such as Elk Basin, Bell Creek and units such as South Pine at the Cedar Creek Anticline and potentially others, Denbury creates one of the largest CO2 EOR platforms in North America. The combined company will have in excess of 640 million barrels of potential recoverable oil with CO2 EOR, in addition to its 126 million barrels of already proven EOR reserves.

To this end, Denbury is making significant investments in its CO2 pipeline transportation system to deliver compressed natural and man-made CO2 to oil fields throughout the Gulf Coast. In the coming weeks, Denbury will complete a major section of its Green Pipeline across Louisiana into Southeast Texas and begin phased CO2 injection operations in 2010. Final construction of the remaining leg across Galveston Bay to the large Hastings Field south of Houston will be completed thereafter.

The Green Pipeline is designed to transport both natural and anthropogenic CO2, and has several potential industrial CO2 sources within immediate proximity of pipeline operations. When completed, the 24-inch, 320-mile pipeline will transport up to 800 MMcf of CO2 a day. Denbury expects to add to the growing number of contracts it has signed to attract industrial CO2 supplies for oil field CO2 injection.

On the horizon is an even more ambitious potential transportation project, the proposed 600-700 mile Midwest Pipeline that would extend Denbury’s reach into the coal gasification regions of the Illinois Basin of southern Illinois, Indiana and Kentucky. The estimated $1 billion project, while only in the feasibility study stage, has excited a wide range of interest groups, ranging from industrial CO2 emitters, to environmental policy activists, to state and federal regulators who see the potential of a large industrial CO2 “take-away” line. 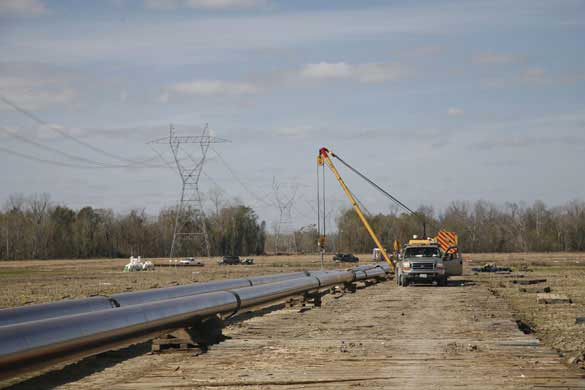 The 24-inch, 320-mile Green Pipeline is designed to transport both natural and anthropogenic CO2, and is in close proximity to several potential industrial CO2 sources. Once completed, the pipeline will carry up to 800 MMcf a day for injection in Denbury’s EOR projects.

The proposed Midwest Pipeline would connect large new sources of industrial CO2, mostly from planned coal gasification plants, to the large number of potential oil fields in the Gulf Coast.

Denbury has identified several potential man-made CO2 sources and entered into a number of purchase contracts with a variety of industrial and new energy production plants, contingent on plant construction, in the Gulf Coast, Midwest and northern Rockies. In total, these projects represent more than 1.5 billion cubic feet a day of potential industrial CO2 supply.

In addition, large CO2 separation facilities must be built to separate and recycle CO2 recovered from produced oil for subsequent reinjection. These facilities can cost upward of $50 million a unit. Once injection operations begin, it can be several months before optimum oil field pressure is realized and “first oil” is recovered.

Another challenge to accepting industrial CO2 is the nature of 24/7/365 acceptance of the volume of gas emitted by an industrial source. Industrial emitters expect that a take-away contract for large volumes of CO2 will guarantee continuous take away without interruption. Pipeline construction for large anthropogenic transport relies on contracts for firm transportation, which until a much larger network of pipelines is built, does not function under an “open access” or “common carrier” model. The scale of pipeline that Denbury is now building (20-24 inches in diameter) becomes full with firm commitments from as few as three large-scale CO2 emitters. Interruptible service under Federal Energy Regulatory Commission-like rules could be a serious deterrent to companies such as Denbury, which offer reliable, dependable and safe operations on a continuous basis.

CO2 off-take agreements with CO2 source projects would be difficult, if not impossible, to execute in order to meet the requirement that large volumes of CO2 be taken on a continuous basis. It is unlikely that a large-scale federal CO2 pipeline construction program is being contemplated, let alone funded. The near-term development of new U.S. CO2 pipelines will be paid for through project financing where CO2 is sold to EOR project developers under long-term contracts, and where those project costs are recovered through new oil production and sales.

One barrier to new CO2 pipeline projects is the lack of certainty in federal law that geologic sequestration utilizing CO2 EOR will be a recognized “carbon solution” for projects that occur before federal climate legislation passes or anticipated EPA guidelines are adopted (both of which are potentially years away). Business is concerned that a legal or regulatory look-back could occur that may severely sanction activities that are considered acceptable today. This uncertainty hamstrings project development financing and can only be resolved under some sort of legally recognized approach to long-term management of CO2 in place. While the industry has signaled it is willing to adopt a new set of regulations for monitoring, verifying and accounting (MVA) injected CO2, it also has made clear that any new rule making must be reasonable, economical and technically feasible.

Denbury is participating in significant scientific research designed to demonstrate what the oil and gas industry has known for nearly 40 years: that CO2 EOR is safe, economical and successful. The industry safely and securely injects 50 million tons of CO2 annually to produce an estimated 250,000 barrels of oil a day, representing 5 percent of total U.S. production. The industry has injected more than 600 million tons of CO2 safely and without incident. Increasing injection levels to boost U.S. oil production from CO2 EOR by 1 million-2 million barrels a day is a realistic goal that can be met under today’s technology and state and federal laws.

Denbury’s Cranfield project in Southwestern Mississippi has become one of only five large-scale carbon capture and storage projects worldwide to reach the milestone of having injected 1 million tons of CO2. No other project in the United States has met this goal (the other projects are located in the North Sea, the Barents Sea, Canada and Algeria). 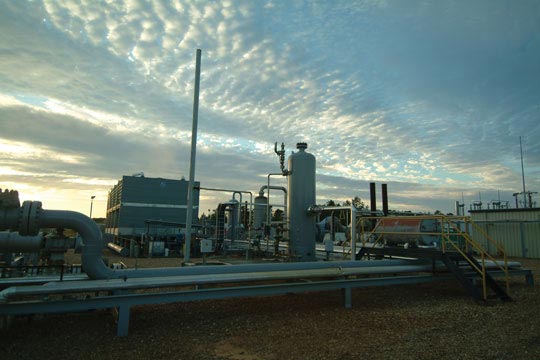 Denbury expects its 2010 tertiary production to increase by 12 percent over 2009 projections. The company will begin injecting CO2 this year in its Oyster Bayou project in Texas and expects to see its first tertiary oil production from the Delhi Field in Louisiana, where injection operations are now under way.

In 2010, Denbury expects its tertiary production to increase 12 percent over 2009 projections. Planned increased spending to develop tertiary projects will substitute for hefty investment spending on pipeline development. The company will begin injecting CO2 in its anticipated Oyster Bayou project in Texas and should see its first tertiary oil production from the Delhi Field in Louisiana, where injections operations have commenced.

With the United States importing more than 60 percent of its oil supplies from overseas, enhanced oil recovery and the ability to redevelop older, depleting oil fields is a way for the nation to tap once unobtainable reserves and make a significant dent in the oil import profile. As technology continues to advance, CO2 EOR also is proving to be a solid method for disposing of significant volumes of industrial CO2. Decades of research and experience show that more CO2 stays in the ground–up to 60 percent more–from the CO2 EOR injection process than is released when the oil is consumed.

As the nation debates complex climate change legislation that will take years to define and implement, the CO2 EOR industry–led by companies such as Denbury Resources–will continue to point the way to a more sustainable energy future by developing domestic resources and applying innovative environmental solutions to carbon management.

GREG SCHNACKE is executive director of governmental relations at Plano, Tx.-based Denbury Resources Inc. A veteran of politics and policy at both the federal and state levels, Schnacke joined Denbury after serving in the energy advocacy practice at Policy Communication. He previously served for 13 years as executive vice president of the Colorado Oil & Gas Association, and also was a senior aide to former U.S. Senate Majority Leader Bob Dole, both in Kansas and in Washington. Schnacke holds a B.S. and a B.A. from the University of Kansas, and a J.D. in energy law from the University of Tulsa College of Law.