Horizontal well spacing remains one of the critical questions facing operators in the Permian Basin’s stacked resource plays because it directly impacts initial well productivities and long-term recovery rates. Drilling and development projects in both the Midland and Delaware basins have been “up-spaced” to increase the distance between wells on the same or neighboring pads. What is the optimal spacing between laterals to minimize pressure interference between parent and child wells during hydraulic fracturing operations and avoid extending child well fractures into the stimulated reservoir area of parent wells? 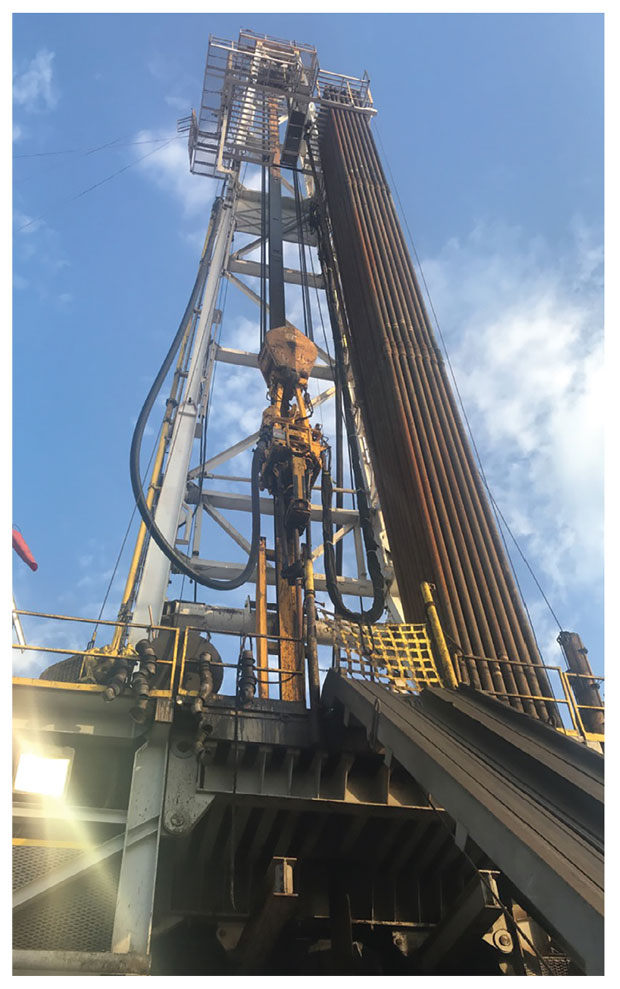 Sabalo Energy is drilling 15,000-foot laterals on its 22,000-acre leasehold in the Midland Basin. The company is completing a six-well pad and plans to move to eight wells per pad targeting the Wolfcamp and Spraberry formations. The company’s Wolfcamp A and Lower Spraberry wells average 660-700 foot spacing, and it is preparing to kick off a Middle Wolfcamp drilling program based on well spacing of 1,000-1,200 feet.

“We are a little more conservative than most when it comes to spacing,” responds Barry Clark, president of Corpus Christi, Tx.-based Sabalo Energy, which has participated in 150 operated and nonoperated horizontal wells in the northern reaches of the Midland Basin in Howard County. “I have seen a lot of data about spacing, including some weird parent-child productivity degradation problems in some projects.”

However, Clark says it has been his experience that production from parent wells temporarily shut in while offset child wells are being fractured usually comes back equal to or better than the levels prior to stimulating the child wells. He notes that Sabalo averages 660-700 foot spacing in its Wolfcamp A and Lower Spraberry wells, and anticipates 1,000-1,200 foot spacing as it kicks off a Middle Wolfcamp drilling program this year.

A privately held independent, Sabalo is running one rig on its 22,000-acre leasehold in Howard County. According to Clark, the company is currently completing a six-well pad and plans to move to eight wells per pad in the future, after initially drilling single wells to hold acreage by production.

Clark says lateral lengths are consistently getting longer and proppant loads have gone up. “We started out drilling 7,500-foot laterals,” he states. “Then we moved to 10,000 feet. Now we are drilling 15,000-foot laterals. In fact, we are taking some of our 7,500-foot laterals that are stacked on top of one another and extending them out to 15,000 feet.”

Sabalo is pumping frac treatments at rates of 100 barrels a minute compared with 65-70 bbl/minute when it made its first foray into the Permian Basin, and has been using 2,000 pounds of proppant per foot. Opposite the trend to increase well spacing in the Permian, Clark notes that stage-to-stage spacing is getting tighter. “We now are using 147-foot stages, plug-to-plug, with eight clusters per stage.”

Sabalo’s fracturing treatments use a mix of local in-basin and out-of-basin sands, and rely on recycled water captured during post-fracturing well flowback operations, Clark says. He adds that the company’s type curve is about 90 bbl/foot in the Wolfcamp and 70 bbl/foot in the Lower Spraberry reservoirs.

“Gas take-away is still a problem in the Midland Basin, but we are fortunate,” Clark acknowledges. “Our leasehold is nearly 92% oil. The rest is dry gas and natural gas liquids. At Waha hub pricing, sometimes we are only able to get $0.10 an Mcf for our produced gas. We have even had to pay to get it processed, but we are not flaring.”

Tulsa-based Laredo Petroleum Inc. completed 15 gross (13.1 net) Midland Basin horizontal wells during the fourth quarter of 2019 using a wider spacing development plan. The average completed lateral length was 9,900 feet. In its fourth-quarter operating report, the company announced that the $97 million it incurred in drilling and completion costs in the quarter was in line with expectations, even with one additional completion, with Laredo achieving performance records for both footage drilled and completed feet per day.

“During 2019, we successfully completed our transition to a returns-focused, free cash flow-oriented strategy,” reports Jason Pigott, Laredo’s president and chief executive officer. “Throughout 2019, we drove down well costs, unit lease operating expenses, and unit general and administration expenses, while improving well productivity versus 2018 by widening development spacing. We expect to retain the benefits of these improvements in our 2020 development program as we transition from our established acreage base to recently acquired tier-one acreage in Howard County.” 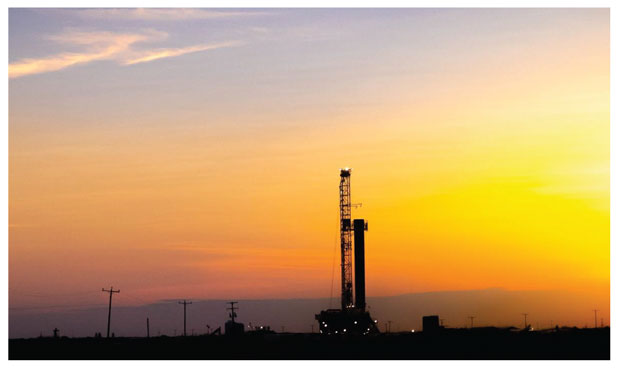 Three of Laredo Petroleum’s four active drilling rigs are working in Howard County, Tx., in the Midland Basin, where the company is drilling and completing a 15-well package on a wider spacing development plan and using average lateral lengths approaching 10,000 feet. In early February, Laredo closed on a bolt-on acquisition to its tier-one Howard County position, adding 1,100 net acres to increase its operated inventory in Howard County to 130 gross (124 net) primary locations in the Lower Spraberry, Upper Wolfcamp and Middle Wolfcamp formations.

The company says it is continuing with developing its acreage on wider interwell spacing. Laredo expects to complete 28 gross (27.7 net) widely-spaced horizontal wells in the first quarter with an average completed lateral length of 8,500 feet. All anticipated first-quarter completions are on Laredo’s established acreage in Reagan and Glasscock counties, where it is operating one completion crew, but will shift much of its focus to newly acquired acreage in Howard and Glasscock counties in the second quarter.

“We leveraged our strength to complete two accretive acquisitions in oilier areas of the Midland Basin,” Pigott continues. “By deploying our proven operations expertise on acreage with higher oil content, we expect to further improve margins and capital efficiency and drive our oil mix above 40% by 2022.

“Our development program over the next three years is designed to maintain production levels, generate positive projected free cash flow at a West Texas Intermediate oil price of $50/bbl and deliver more than $100 million in projected free cash flow at $55/bbl,” he goes on. “Utilizing commodity prices of $50 a barrel WTI and $2.25 per MMBtu Henry Hub for the budget in 2020, the company expects to grow oil at a mid-single digit rate within cash flow and be in full development mode in Howard County by the end of the second quarter of 2020.”

The company reports that two of its four active drilling rigs have been deployed to Howard County. A third was expected in early March. The first of Laredo’s initial 15-well package in Howard County has been drilled successfully and completion operations were expected to commence on the full package during the second quarter, according to the company.

Pigott says Laredo is beginning to add more sand to its standard completions design, taking advantage of the low cost of in-basin sand. The enhanced completions design, utilizing 2,400 pounds of sand per foot, is expected to increase the cost for an Upper/Middle Wolfcamp 10,000-foot lateral to $6.8 million, but potentially enhance well productivity.

“Significantly, expected returns at the lower well cost increase by 6% and 8% at $50/bbl and $55/bbl, respectively,” Laredo stated in a release announcing the completion of the two Cline wells. “Although early, initial production results are encouraging and reinforce the company’s assumption that Cline wells benefit from larger completions. Combined with the lower costs, expected returns for the company’s approximately 150 Cline locations become increasingly competitive and extend Laredo’s inventory of oilier, higher-return opportunities.”

Scott Sheffield, president and chief executive officer of Pioneer Natural Resources Company, says the company had an “excellent” 2019, thanks in part to lowering the cost of each well drilled and completed from $12.4 million in 2018 to $8.8 million last year. How was Pioneer able to accomplish a 30% savings in well cost?

In the company’s year-end earnings report, Sheffield lists five key factors in lowering costs per well. The first is drilling and completion efficiencies, and the second is reduced completion costs achieved by partnering with service companies. The company averaged drilling about 1,000 feet a day and completing 1,600 feet a day in 2019. Pioneer has also transitioned to West Texas in-basin sand, resulting in 50% lower sand costs. Facilities optimized around development and differentiated water infrastructure also have lowered well costs, according to Sheffield. 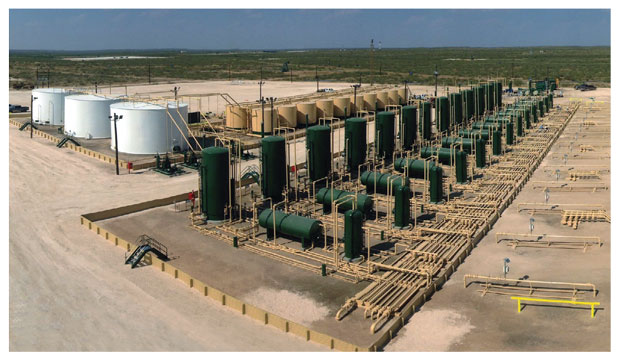 Pioneer Natural Resources Company averaged drilling 1,000 feet a day and completing 1,600 feet a day in 2019 while lowering its average horizontal well costs from $12.4 million in 2018 to $8.8 million last year. Pioneer plans to operate 23-24 rigs in the Permian in 2020 and place 345-375 wells on production by year’s end, mainly in the Wolfcamp A, Wolfcamp B and Spraberry formations. Pioneer ranks as a top operator in terms of activity and performance, and leads the way with respect to reducing flared or vented gas production.

Pioneer, which is drilling four wells per pad with average lateral lengths of 9,800 feet, placed 77 horizontal wells on production in the fourth quarter. Joey Hall, executive vice president for Permian operations, says Pioneer plans to operate an average of 23-24 horizontal rigs in the basin in 2020, including five rigs in its southern joint venture area.

Interestingly, all of Pioneer’s oil production is sent to the Gulf Coast and 95% of it is being exported, according to Rich Dealy, executive vice president and chief financial officer. He adds that Pioneer also is transporting its NGLs and gas from the Permian Basin to premium-priced markets, leading to an incremental benefit of $4 million during the fourth quarter and a full-year 2019 benefit of $283 million.

By transporting its gas and NGLs to higher-priced West Coast and Gulf Coast markets, compared with selling gas into the oversupplied Waha gas market, Dealy says, Pioneer realized an average price of $2.21/Mcf during the fourth quarter compared with the average Waha index price of $1.11/Mcf.

Speaking of natural gas, Sheffield says one proposal at a recent conference on flaring in the capital city of Austin was to set a target of flaring less than 2% of produced gas in West Texas. It just so happens that Pioneer already is meeting that target. In fact, according to Sheffield, the company ranks at the top of the list of operators flaring less than 2% of their total gas production.

Cimarex Energy also is reporting success with 8,500-foot or longer laterals in the Wolfcamp and Bone Spring formations in the Delaware Basin. In its fourth-quarter operations report, Cimarex noted that it has drilled 38 longer-lateral wells in Culberson County, Tx., 15 of which have been on production for 24 months with 400,000-barrel cumulative production. Its Culberson wells have a $2 expense per barrel of oil equivalent compared with $3.50 per boe on the rest of the Delaware Basin. Wolfcamp completions used 94% recycled water in 2019, saving $1.78/bbl for procured water.

Cimarex Energy is operating 10 rigs and two completion crews in the Delaware Basin, and plans to drill and complete 81 long-lateral wells in 2020 as part of 15 separate development projects targeting primarily the Wolfcamp formation in Culberson and Reeves counties in Texas and Lea and Eddy counties in New Mexico.

The company lowered cost on 76 net wells in the Delaware Basin last year to $1,188 per completed lateral foot. It brought 23 net wells on production in the fourth quarter, including 12 ahead of schedule.

Cimarex says it is operating 10 rigs and two completion crews, and is employing 90% of its drilling and completion capital in the Permian Basin, continuing to focus on long-lateral Wolfcamp wells in Culberson and Reeves counties in Texas and Lea and Eddy counties in New Mexico. Avalon and Bone Spring wells round out the remainder of its planned Permian wells.

“Our capital planning for 2020 shows that at a $50/bbl WTI price and similar capital to the amount invested in 2019, Cimarex can generate 9% midpoint oil growth and generate free cash flow,” comments Tom Jorden, chairman and CEO of Cimarex. “As we review our three-year plan, we believe a ratable level of activity should, at a minimum, yield similar production growth with increasing free cash flow in each of the next three years at $50/bbl WTI.” 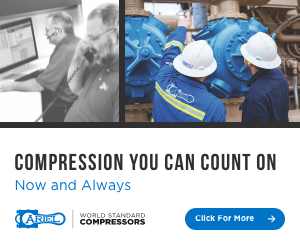