BOSTON–As of mid-November, the United States Department of Energy had received applications to export 41 billion cubic feet of liquefied natural gas a day. Although only a fraction of the proposed LNG export terminals cited in those applications ultimately will get built, the sheer quantity of export applications and the total gas volume they represent show how excited America’s entrepreneurs are at the thought of sharing the United States’ natural gas bounty.

It is easy to see why, because domestic natural gas has a ready market. Utilities, energy suppliers and other LNG importers in countries such as Korea, Japan, China and Indonesia are eager to diversify their supply portfolios. In the process, they hope to move away from import contracts that price LNG based on oil prices in favor of contracts that price LNG on natural gas. Buying LNG at 15 percent of the cost of oil was tolerable in the 1990s when Brent prices tended to average below $20 a barrel on an annualized basis, but makes little sense today.

Many LNG importers have another motive for seeking U.S. supplies: They want to replace coal with clean-burning natural gas in order to restore or preserve air quality. This is particularly important in China, where smog has become an international embarrassment. Other countries view affordable LNG as a safer alternative to nuclear power in the wake of the Fukushima disaster.

For many of the people behind the export applications, there is more at stake than business profit margin. As the co-owner of two export projects, Eos LNG and Barca LNG, I am motivated largely by a desire to see the United States become the world’s largest supplier of LNG. We have the abundant gas supplies, infrastructure, and energy entrepreneurs to make that dream a reality.

And we should. Although LNG terminals themselves require only small staffs to operate, they have a tremendous effect on the economy because they increase the demand for natural gas and encourage domestic drilling. That drilling creates high-paying jobs, including many that do not require a college education.

LNG export opponents worry that the additional demand will increase domestic natural gas prices and stifle growth in the manufacturing and petrochemical sectors. They are right that prices will go up, but the increases will be too small to have a major effect. Thus, in its latest analysis of the effects of LNG exports, which it published in October, the U.S. Energy Information Administration found that “increased energy production (from LNG exports) spurs investment, which more than offsets the adverse impacts of somewhat higher energy prices.”

EIA estimated that the total growth in gross domestic product from exports would range from 0.05 percent to 0.17 percent, with the exact amount generally increasing alongside total LNG export volumes.

In addition to bolstering the U.S. economy, LNG exports would increase the United States’ influence abroad, particularly in Asia, where many of the buyers are located. Given the region’s rapid growth, such influence may be critical from both an economic and a political perspective.

LNG exports also could enable U.S. allies in Europe to reduce their dependence on natural gas from Russia. As the pricing disputes, supply disruptions and insurgencies in Europe and the Ukraine from 2006 to the present suggest, Russian President Vladimir Putin has no qualms about using natural gas as a weapon to implement Russian policies. That is understandable, for it is an effective one. The Ukraine, which imports 70 percent of its natural gas from Russia, is so desperate for an LNG import terminal that it almost got swindled into signing a deal with an imposter claiming to represent the Spanish national gas company.

Fortunately, many European countries are eager to weaken Russia’s grip on natural gas supplies. Toward that end, our NATO allies Lithuania and Poland are completing import terminals.

Russia also would be more than happy to extend its influence in other regions. I have spoken with many Chinese natural gas purchasers, and they often boast about the deals they are cutting with Russia, because it offers such low prices. Of course, a deal with Russia can change, a point I try to bring up while advocating for U.S.-sourced exports.

LNG exports also might enable the United States to weaken the coffers of Iran, which is building a natural gas pipeline to Pakistan that could link to pipelines in India. If superior U.S. LNG economics can enable us to compete with Iran on price–and I am confident they will–an import terminal in Karachi would do wonders for the United States’ relations with Pakistan in the wake of the unpopular drone policy.

Of course, the economic and political benefits of LNG exports will occur only if U.S. entrepreneurs build export facilities. Fortunately, that is exactly what they are doing. Carib Energy (USA) LLC’s small liquefaction plant in Florida is shipping LNG already to countries in the Caribbean and Central and South America, but it is an unusual case. It is working with much smaller volumes than many of the proposed projects, and is using ISO-certified containers rather than dedicated tankers to transport the LNG.

Carib Energy’s plant is authorized to export only 40 million cubic feet a day, but much larger terminals will follow shortly. The first to go operational will be Cheniere Energy Inc.’s Sabine Pass liquefaction facility in Cameron Parish, La., which is authorized to export 2.2 Bcf/d and should come on line late this year or early next year. The Sabine Pass terminal will be followed by Dominion’s Cove Point terminal in Maryland, which has a capacity of 770 MMcf/d. 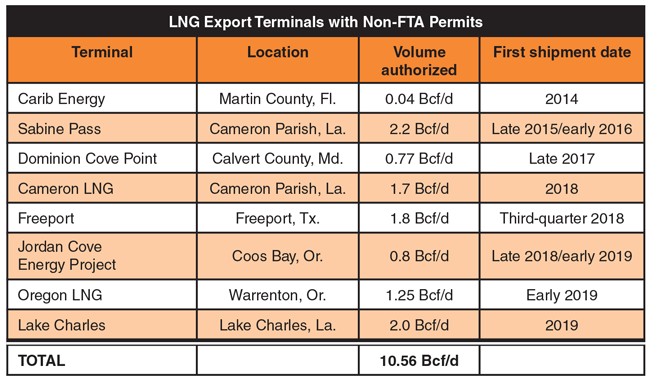 As of Nov. 14, DOE had authorized five other facilities to export LNG to countries with which the United States does not have free trade agreements. Assuming all five get built, the United States would have total export capacity exceeding 10.5 Bcf/d by 2019 (Table 1).

While additional capacity may take time to come on line, I am confident other terminals will be built (including, I hope, the two 1.6 Bcf/d facilities my companies are developing). Constructing an LNG terminal is comparable to building a giant refrigerator. The technology is proven, so the construction itself is not a concern as long as it is well executed. However, before construction can begin, terminals need to secure long-term contracts with credit-worthy buyers, obtain financing, and get regulatory approvals.

All three of these tasks take time. Most of the potential buyers for LNG are utilities or oil and natural gas traders. Understandably, they need to be confident an export terminal will become a reality before they commit to 20- or 25-year off-take agreements. To give potential buyers that confidence, the LNG developer needs to form strong relationships with key decision makers and convey how much thought has gone into the facility’s design and construction.

Even in the best situations, securing contracts can take time because the buyers often are large organizations that must involve several people from different departments in major decisions. But with patience, it is possible. The many terminals that already have signed agreements attest to that.

Once a developer has long-term agreements in place with several customers, it is possible to obtain financing. Together with demand, banks’ tolerance for LNG-related risk is likely to be the limiting factor on terminal construction. A year ago, an analyst estimated that banks would commit as much as $60 billion to domestic export terminals before feeling overweighted. That number will change with the long-term outlook for shipping costs, oil prices and natural gas prices, because those ultimately determine how much countries save by buying U.S. LNG.

Regulations present the final hurdle. To build an LNG terminal on or near shore, the developer needs approval from the Federal Energy Regulatory Commission, which must conduct an environmental review while evaluating a project. Unfortunately, FERC does not have the staff to complete the reviews as quickly as it should, especially given the many other countries that are building export terminals to supply LNG to key buyers in Asia.

I hope the newly elected Congress will give FERC the staff it needs to work more quickly so potential U.S. LNG shippers can complete terminals more rapidly to compete with foreign LNG suppliers and secure a bigger share of the global LNG market.

Because the burden of proof is on opponents to a project, getting non-FTA approval is a matter of providing the necessary information, responding to public comments, and being patient. In the past, concerns that exports would harm the U.S. economy made the applications’ ultimate fate uncertain. To address those concerns, DOE commissioned a study on the economic impact of U.S. gas exports. Since the study found that exports have a positive effect on the economy as a whole, DOE has approved applications more quickly and consistently.

When I decided to develop LNG export terminals, I thought floating terminals would be easier to permit, finance, and construct. In reality, they are harder to finance because the requisite technology is unproven in comparison with traditional land-based terminals.

So, instead of building a terminal offshore, Barca and Eos will be constructing facilities onshore. Both will be located in Brownsville, Tx. We chose that location because it has the 45-foot draft to accommodate LNG tankers, provides easy access to natural gas from the Eagle Ford Shale, and is a few days closer to the Panama Canal than the other areas we considered along the Gulf Coast. We expect the terminals will take two years to permit and another four years to build.

At this point, both projects are in the early stages. I do not know whether we will secure the off-take agreements and financing necessary to make them a reality. What I do know is that I am far from the only American entrepreneur who is trying to export LNG, not only because it makes good business sense, but because it will create well-paying jobs and boost the United States’ influence in key regions. Even if only a fraction of these entrepreneurs succeed, we will have a noticeable impact on natural gas demand, drilling activity, and U.S. prosperity.

Andrew Kunian is the chief executive officer of Eos LNG and Barca LNG, which are developing liquefied natural gas export terminals in Brownsville, Tx. Kunian has been a global macro-portfolio manager trading equities, bonds, commodities, futures and options for 20 years. He graduated from Tulane University with a B.A. in political science and from New York University’s Stern School of Business with a concentration in finance and marketing.