AUSTIN, TX.–The industry finds itself in the second inning of the most historic geopolitical and economically consequential industrial revolution in human history: the harvesting of oil and gas from unconventional and “hybrid” reservoirs using induced hydraulic fracturing.

Twelve years ago, I gave a talk that landed me on the front pages of newspapers for the complete novelty of the opinion I expressed, which was that the nation was on the verge of an unprecedented onshore drilling and production boom. Soon thereafter, lower-48 drilling took off.

Activity quickly spread from the Barnett to the Fayetteville, Haynesville, Marcellus and other gas shales. The lexicon of resource plays seemingly expanded overnight into liquids-rich formations such as the Bakken, Eagle Ford, Utica, Niobrara, SCOOP, STACK, etc. Emerging at the center of the unconventional universe is the very basin that for decades was a cornerstone of conventional U.S. oil production: the Permian. Its massive potential is being redefined practically by the day, serving the world notice that the same stacked-pay geology that has yielded a cumulative 29 billion barrels of oil and 75 trillion cubic feet of gas holds a new mother lode in resource plays.

As the initial vertical wells in these plays turned horizontal and original “light sand” frac designs began pumping ever-larger volumes of proppant, the production results that followed were nothing short of spectacular. Early in the first inning, independents rewrote the book on the nation’s natural gas storehouse and made America the world’s top gas producer, with consequential benefits for every aspect of the domestic economy.

When the rigs set their sights on oil plays, those same producers accomplished an even more mind-bending feat by expanding U.S. crude output by more than 4 million barrels a day–a rate of increase unmatched in the history of the global oil business.

The severe and sudden drop in oil prices in late 2014 temporarily halted the production growth. As oil prices plunged from more than $100 a barrel to below $30, there was a 1.2 million bbl/d downward adjustment in U.S. production volumes. However, oil drilling began to regain its footing in the second half of 2016 and overall U.S. production began increasing again early in the fourth quarter of 2016–despite market headwinds that would be considered catastrophic to any other commodities industry.

During the two-year depression, the United States proved to have the planet’s most resilient whole cycle infrastructure for producing oil and gas, reducing drilling costs by 30-40 percent while increasing per-well production by some 15-20 percent on an annualized basis–more than 50 percent overall per well since 2013, and nearly 100 percent in the Permian Basin. Figures 1A and 1B show type curves for the overall lower-48 as well as the Permian region between 2013 and 2016.

Although substantial drilling cost reductions were related to deeply discounted service rates, which are not sustainable over the long term as the industry recovers, the production improvements most likely will continue well into the foreseeable future.

Life’s most important lessons often must be learned the hard way: by persevering through hardship. The same is true of the oil and gas business. Indeed, the industry learned a lot during the downturn, and those hard-earned insights have important implications for the way forward.

Any consideration of the key takeaways from all the pain and stress inflicted by low commodity prices must begin with the acknowledgement that both technology and finance make the difference in tight oil resource plays. More on technology in a moment, but appropriate credit needs to be given to the part of this business that is absolutely instrumental: oil and gas finance. Today, the industry is blessed with an amazingly sophisticated, knowledgeable, and most importantly, permanent full-time partner in the oil and gas financial services sector.

In the 1980s, oil and gas finance was a hodgepodge of secured senior credit and fair-weather equity investors. Today, it is comprised of oil and gas experts that round out the senior secured debt with various flavors of subordinated debt, mezzanine, and various sorts of equity financing that quickly evolve to meet the economic criteria of the day.

Most importantly, they are oil and gas investors that recognize there is money to be had in good times as well as bad. Witness the value turnaround and successful divestment of Clayton Williams Energy in the past 12 months as an example of this new flexibility. In January, Clayton Williams Energy agreed to a $3.2 billion buyout offer from Noble Energy for 71,000 net acres in the core of the Southern Delaware Basin.

As oil prices collapsed two years ago, oil field service companies reacted quickly to remain alive. However, operating companies should not hold their breath waiting for the service sector to indebt itself again to add capacity quickly. A new beta in commodity price risk needs to be baked in. Compound that factor with the outsized beta the services sector exhibits to price relative the exploration and production sector, and the environment is not robust for low-cost financing for building out fleets as oil and gas prices rebound.

Combine this with recent surveys of “rationalized” oil field services personnel that indicate at least 80 percent “would not get back into the oil patch” if the opportunity arose, and it strongly suggests that service prices will spike as the economic environment improves, and that will not be ameliorated in the short term by swift reinforcments of new crews and equipment. This will be most acute in services surrounding pressure pumping, since every well is requiring more stimulation intensity. We may be able to support our historical production rates with half the number of wells, but not with half the amount of pressure pumping, fluids, chemicals, and proppants. The need for these services and products will only continue to expand.

It may sound simple, but another key lesson we have learned is that the recoverable resource available to develop in the United States is extraordinarily large. We are not talking about today’s P1 (proved), P2 (probable) and P3 (possible) reported reserves, but the natural positive response to reserve volumes as operators naturally down space reservoirs to progressively greater effect. One of the biggest unwritten stories of the downturn is how the industry increased per-well estimated ultimate recovery rates (that part is well understood) at the same time it substantively lowered the amount of stimulated rock volume (which the press has not covered at all).

How does that jibe with increasing proppant densities and bigger stimulations per well?

The increased intensity of the stimulated rock volume is paying big dividends. For example, a well making X with 900-foot frac wings versus a well producing 1.2X with 200-foot frac wings proves up Y reserves per 220 acres versus 1.2Y reserves per 50 acres. That is nearly five times the eventual recoverable reserves initially targeted. These numbers have not yet begun to percolate into reserve reports, but in reality, unconventional producers drilling economic wells are sitting on P2 and P3 recoverable resources that dwarf their reported figures. This leads to the conclusion that the industry will not run out of good places to drill anytime soon in domestic resource plays.

Add to that total the at-present “uneconomic” plays that are sandwiched within economic ones. The Permian Basin serves as a perfect example. Each of these unprofitable plays becomes profitable once the surface infrastructure is developed for the nearby plays that are economic, and they are permeated by a subsurface infrastructure of well bores. Adding a horizontal leg and fracturing these zones sometime in the future after the more economic legs play out will be very profitable. Because these cannot be accurately forecasted, and the production from these areas is 20 years or more into the future, their net present value is negligible. That certainly will not be the case in 20 years.

A fourth point is that the industry’s expansion into hybrid plays has significantly expanded the recoverable resources that can be targeted in North America. These are reservoir rocks that actually have water components and historically have been conventional drilling targets, such as the San Andres and Bone Spring in West Texas, the entirety of the SCOOP/STACK formations in Oklahoma, the Parkman in the Powder River Basin, and many more.

Technology, of course, is fundamental to the successful economic development of any resource or hybrid play, namely pad-based horizontal drilling and multistage fracturing techniques. Taking it one step further, producers already are reinventing the ground rules, with “mega pads,” ultralong laterals and “monster” frac treatments. But whether the pads are in the Rockies or Appalachia, where environmental mandates and land access are key drivers, or in drought-prone regions such as the Permian and South Texas, the rapid increase in hydraulic fracturing activity has put a new operating emphasis on water management. Creating a real market for water, combined with a real cost to dispose of oil field brines, has resulted in the proliferation of clean water technology, and focused efforts at cost reductions for water treatment will have ramifications far outside the oil patch. 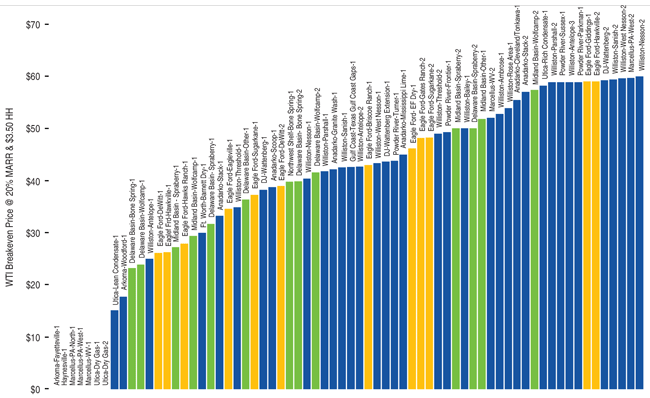 A final and invaluable lesson from the downturn is that the United States can maintain oil production at a price of $40 a barrel and can increase production at any point above that floor price. Figure 2 shows West Texas Intermediate breakeven prices for various unconventional plays, demonstrating the world-class economics at a minimum acceptable rate of return (MARR) of 20 percent.

Since May 2016, U.S. operators have added 11 rigs a week to active status. Analysis by Drillinginfo concludes that at this rate of rig activation, the United States can increase oil production by 1.1 million-1.3 million bbl/d by the end of 2017–effectively replacing every barrel lost during the downturn at an oil price level well below what was considered the breakeven in late 2014 when prices began turning south. This is illustrated in Figure 3, again at a 20 percent MARR. 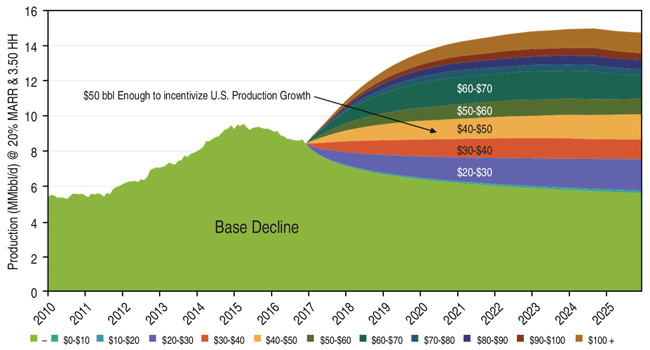 It should be noted that operator guidance suggests a more modest addition of 600,000 bbl/d by year’s end. This suggests either a slowdown in new rigs coming back into service, or unabated drilling activity resulting in robust additions to the national inventory by the end of the year.

What challenges remain? Well, certainly the industry can continue to explore how much of the in-place hydrocarbons can be viably extracted. At what are recognized as “fully optimized” levels today, the recovery factor percentiles range from the high teens to low twenties. We also know that fully optimized is still some 15-20 percent below what can be achieved with what the industry already knows.

No operator gets it completely right. The best are still sub-optimized, either spending money on procedures that provide no return, or failing to pay for procedures that may yield a much greater return. From our observations, the very best operators get about 80 percent of it right in resource plays. Another potential breakthrough in optimization strategy is to design each simulation and completion job on a location-by-location basis according to each well’s exact geological criteria.

Another challenge is extracting more valuable crudes. In other words, can operators use new stimulation and production technologies to target and produce lower-API gravity crude oils? Today, very high-gravity crude oils are produced at the expense of the lower-gravity crude oils needed to maximize U.S. refinery spreads. Consequently, light sweet crudes will begin to sell at a discount to WTI similar to the heaviest crudes, while mid-grades will be valued at a premium. 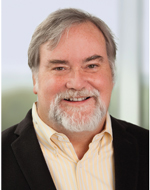 ALLEN GILMER is co-founder and chairman of Drillinginfo, and he is the chairman of the Texas Independent Producers & Royalty Owners Association. Gilmer is active in all aspects of Drillinginfo’s new product development and is widely recognized for his industry leadership and vision. Gilmer holds several patents in multicomponent seismology. He received a B.A. in geology from Rice University and an M.S. in geology from The University of Texas at El Paso.