By Gopi Balakrishnan and Alan Grosse

HOUSTON–Growing numbers of oil and gas companies are mandating as a best practice using natural gas to power drilling rigs, hydraulic fracturing fleets and other well site equipment. And while independent operators of all sizes are advocating for and adopting natural gas as a primary fuel source for well site operations, drilling contractors themselves also are playing a leading role.

Dual-fuel engines are designed to switch seamlessly between diesel and natural gas fuels–including compressed natural gas, liquefied natural gas and conditioned field gas. The engines provide the fuel optionality and operational flexibility to run on 100 percent natural gas, a mixture of diesel or natural gas, or 100 percent diesel if a natural gas supply is not available. More than 100 drilling rigs with dual-fuel capabilities are operating in North America, and the number continues to increase.

Dual-fuel systems also are being incorporated in fracturing operations, which concentrate significantly more horsepower on a well location–more than 24,000 horsepower in some cases. This requires a significantly larger supply of natural gas than drilling operations using a 1,000-1,500 horsepower high-spec rig, which is typical of onshore horizontal applications.

Developed for “mission critical” military battlefield applications, SSGs on North American dual-fuel onshore rigs have documented significant reductions in fuel consumption, maintenance and emissions; and they have eliminated rig “blackouts.” Most importantly for contractors, integrating the technology allows drillers to reduce the number of dual-fuel generators required for each rig, resulting in lower capital costs and operating expense.

For all their promise, however, dual-fuel engines still have room for improvement in maximizing their performance and efficiency. Drilling rigs require massive amounts of electric power to handle transients hundreds of times a day during drilling, backreaming and tripping. Because natural gas is 20-30 percent less powerful than diesel on an energy equivalent basis, and takes two to three times longer to respond to individual load steps than diesel, natural gas fuels are not effective or efficient during these high-horsepower transient periods.

Therefore, not only are typical drilling power systems oversized to handle those frequent peak loads, but dual-fuel generator sets have to switch to diesel more often. This results in systems only averaging a 35 percent substitution rate, which increases fuel and capital costs, maintenance, and emissions while resulting in slower drilling times, less power reliability, and poor transient response.

The chief benefit of pairing dual-fuel rigs with SSGs is reducing fuel costs. By operating generator sets at higher average and continuous loads, where they are most efficient, rig operators will use 20 percent less fuel, which amounts to approximately $1.2 million a year in typical drilling operations.

Moreover, by using SSGs to handle peak and transient loads, operators can use smaller-rated generator sets and drill using single-generator set operations, allowing second and third generators to be completely shut off during a significant portion of the drilling operations. Additionally, by increasing the natural gas substitution rate, operators can cut costs by using less diesel fuel and taking advantage of cleaner-burning natural gas for longer periods.

Finally, another major operating cost savings is the ability to reduce drilling times. By operating generator sets only at their most efficient rates–which reduces or at least eliminates timely blackouts–and by using the pulse power capabilities of SSG technology to produce full power instantaneously, drillers will notice significant decreases in drilling time. Systems in the field have been able to reduce drilling time by 14 days a year. That efficiency can save operators up to $350,000 annually in rig and ancillary well site equipment day rates. 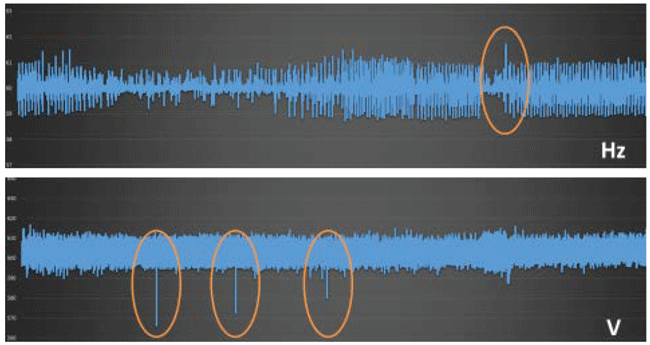 Demand for dual-fuel systems is increasing rapidly in the oil and gas industry, as these systems give operators flexibility in using natural gas when possible, while also keeping the reliability and power of diesel available. By increasing natural gas substitution rates through pairing SSG technology with a dual-fuel engine system, the generators can handle peak and transients loads to reduce the time needed to run diesel, thereby significantly reducing fuel costs and emissions.

Reliability is a key issue for every drilling contractor and oil and gas operator. System downtime is not only costly, but it is also dangerous. By having energy storage backup for critical electrical systems, SSG technology can reduce blackouts from one to two times a day on typical rigs to less than one time a week (Figure 2). 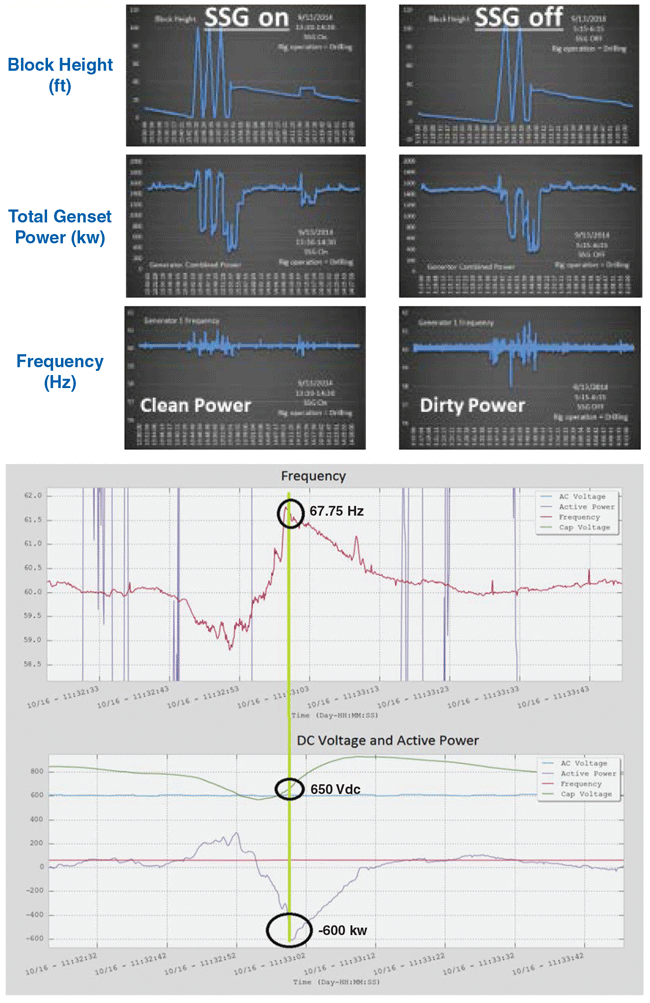 Another significant benefit of SSG technology on dual-fuel rigs is its emission reduction. Particularly when drilling in environmentally sensitive areas, reducing emissions not only creates a cleaner environment, but it also can save on costs by reducing fines associated with higher emissions. SSGs reduce emissions in three key ways.

First, by eliminating transients and running generators only at their optimal efficiencies, drillers avoid rapidly ramping up the engines. Think of this as eliminating the big puffs of black smoke coming from a tractor trailer’s exhaust when it accelerates after being stationary.

Second, SSGs allow systems to take greater advantage of cleaner-burning natural gas by increasing the gas substitution rate from an average of 35 to 70 percent.

Finally, most drillers oversize their generator sets for peak and transient loads, even though the average load is only 30 percent of its maximum capacity. By using SSG technology to handle peak and transient loads, drillers can downsize their engines; and, in most cases, they can turn additional generator sets off completely to reduce engine exhaust emissions further.

Independent testing has documented SSGs have reduced emissions by as much as 63 percent for nitrogen oxide, 58 percent for carbon monoxide, 55 percent for oxygen, and 52 percent for hydrogen sulfide (Figure 3). 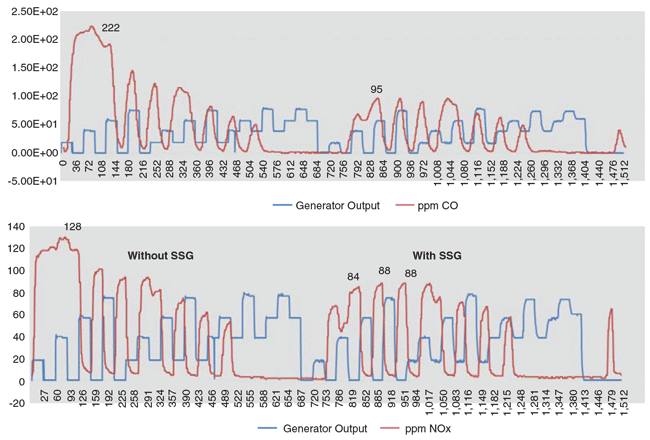 SSG technology can reduce maintenance costs by up to 40 percent when fully optimized with a dual-fuel rig. Allowing solid-state generators to handle peak and transient loads provides users the ability to cut off generator sets entirely, which significantly reduces their run times. Furthermore, by only operating generator sets at optimized loads, users will see a significant decrease in blackouts and overall engine stress.

Finally, pairing SSGs with dual-fuel rigs has been able to reduce operating costs by as much as 33 percent. If drilling operators use the technology to handle peak and transient loads, they can reduce the size of generator sets needed and reduce the number of generator sets purchased.

No two drilling rigs are exactly alike. Every rig has its own set of specifications and challenges that a contractor must face. One of the advances in SSGs is the ability to optimize for every situation. Through proprietary software, the technology can be designed to take into account the optimal settings for each customer’s generator sets, allowing operators to maximize power performance and reliability (Figure 4). 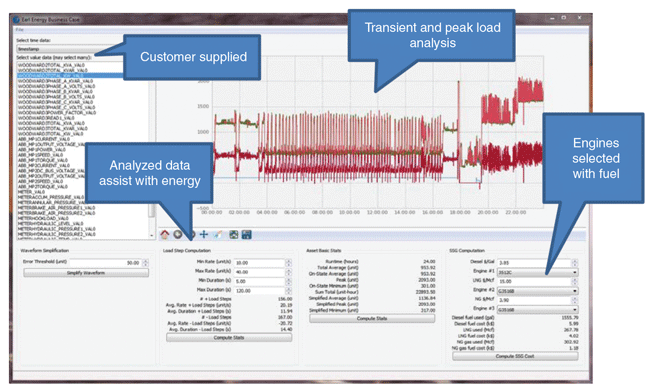 SSG technology ties into the alternating current bus bar of the rig’s power house. When a frequency or voltage deviation is detected, it will automatically supply power in less than 200 milliseconds to counteract changes in the electrical frequency. In response, the SSG will decrease systematically the amount of power supplied, and allow the generator to take load continuously. Figure 5 illustrates how technology can maintain voltage and frequency deviations within plus or minus 5 percent, increasing power performance and reliability. 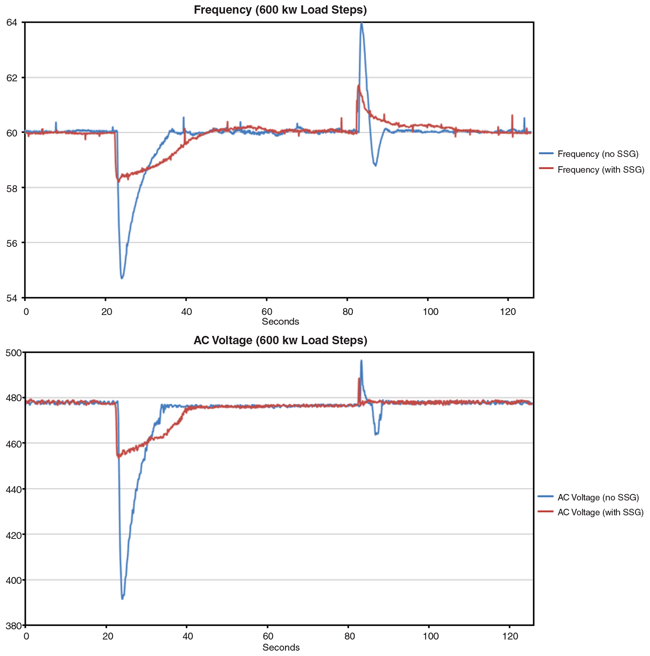 Since 2010, generator hybridization technology has advanced as battery and ultracapacitor performance has improved, while costs have been reduced by half. As a point of comparison, the same system that hybridized a 60-kilowatt military generator in 2010 costs as much as today’s 1 megawatt hybridization products. This is a 10-fold improvement in performance versus cost.

Moreover, it is crucial to distinguish between energy storage chemistries at the individual cell level, as well as distinguish between energy storage products at the module level. While cells may have certain performance and safety characteristics, modules may have different characteristics and must be evaluated for each specific application accordingly.

For example, with optimized module assembly, certain lithium titanate batteries can deliver 2.5-times higher charge and discharge rates in SSG applications than the same cells in an automotive module. Modules also provide an additional level of safety, adding features such as shock mounting and electrical isolation to improve durability and mean time between failure in industrial applications.

In regard to safety, the SSG technology utilizes industrial-proven three rings of safety management and control. These are electrical control to isolate the system when a fault occurs, mechanical breakers, and irreversible fusing as a complete and robust escalating tiered required safety structure.

Pairing dual-fuel generator sets with SSG technology will revolutionize the oil and gas industry in the coming years, as it helps drilling operators combine the best of diesel and natural gas generator sets. The ability to increase natural gas substitution rates significantly will further reduce fuel costs and lessen environmental impacts; all while the SSGs allow them to maintain voltage and frequency regulation, and to run at optimal settings, which will increase power performance and reliability. Finally, drilling operators will no longer have to choose. With dual-fuel generator sets and SSG technology, they can maximize their drilling power on every rig, every time.

Alan Grosse is manager of FlexGen’s oil and gas division in Houston. Before joining the company earlier this year, Grosse served as senior business development manager for GE Waukesha and GE Jenbacher gas engines, and as supplier audit leader for GE Energy. Prior to that, he served in the U.S. Coast Guard. Grosse holds a degree in naval architecture and marine engineering from the U.S. Coast Guard Academy, and an M.B.A. from Emory University’s Goizueta Business School.