To help deliver the energy that powers the U.S. economy while meeting expectations from producers, investors and the public, hydraulic fracturing companies must continue finding ways to reduce costs while minimizing their environmental impacts.

“When I talk with pressure pumping companies, their primary goal still is to be as efficient as possible,” says Derek Kamp, sales manager for drilling and completions at Caterpillar. “However, they also are studying their environmental footprint and asking how we can help them reduce it.”

Maximizing efficiency means preventing unexpected downtime. According to Bryan Wagner, director of engineering for pressure pumping at SPM Oil & Gas, which Caterpillar acquired in February, that has become more challenging as the demands placed on pumps have grown. “Pumping has become almost continuous, with pumps regularly clocking 18-22 hours a day,” he observes.

Preventive maintenance is essential to improving equipment reliability and extending run times, but it can be difficult for pressure pumping companies to identify the sweet spot between inadequate maintenance and excessive spending, Kamp says. “In today’s tough commercial environment, pressure pumpers need to run extremely tight ships, which means many people fill multiple roles,” he explains. “For a frac crew boss who is responsible for ensuring day-to-day operations run safely and efficiently, it can be hard to find time to optimize maintenance.”

To alleviate the burden on its customers, Caterpillar now offers power ends and flow iron as a service. “Under this model, instead of selling equipment to the customer, we provide the power end, fluid end, manifold trailer and consumables in exchange for a fee,” Kamp details. “The contracted rate depends on how often the customer is pumping, so our success depends on their success.”

As part of the service, Caterpillar embeds a fleet manager with each spread who works alongside the crew to make sure they maximize component life, he adds. “The fleet manager understands how different ways of operating affect equipment and can point out best practices that will increase its life,” he explains. “The manager also looks at oil samples and watches the data coming from engines, transmissions and pumps to optimize the maintenance program.

“For example, the manager may learn that a specific fleet can increase oil replacement intervals from 500 to 700 hours without compromising the equipment,” Kamp illustrates. “If that fails the component, it’s on Caterpillar rather than the customer. The model encourages us to work together to extend equipment life, but to do it in a safe manner.”

Kamp says the fleet managers benefit from access to seasoned engineers. “Even before we acquired SPM, we had a pump and fluid end division with a strong technical team,” he says. “Bringing SPM into the portfolio added engineers, sales teams, technical experts and technicians who had worked with frac equipment for 30 or 40 years.

“That experience is invaluable,” he reflects. “When a fleet manager sees an issue in the field, he can call one of the senior technical experts at SPM to bounce ideas off him and get feedback. Usually, the senior technician has seen similar issues before and can point the fleet manager in the right direction, which lets us resolve issues faster.” 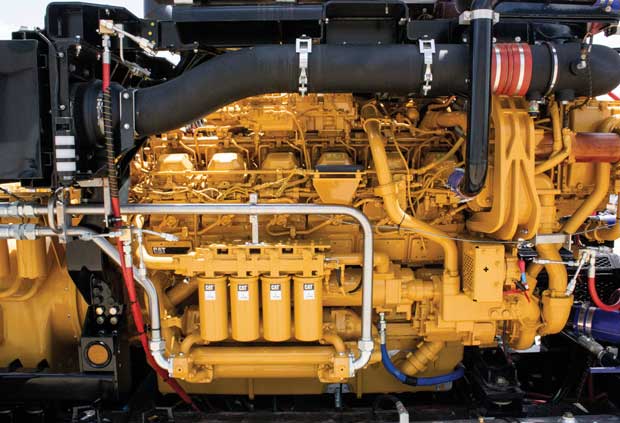 By running on a mix of diesel and natural gas, Caterpillar says its dynamic gas blending engines shrink emissions and fuel costs while maintaining power, performance and reliability. The engines’ dual-fuel capability can reduce hydraulic fracturing spreads’ diesel consumption as much as 55%.

Kamp says the fleet manager’s focus on optimizing equipment and access to data and experts from around the world can be extremely beneficial. “The first company to adopt the service model reported after four or five months that its average fluid end life increased 400 hours,” he says.

“For most frac companies, the largest maintenance expense comes from the power and fluid end,” Kamp continues. “As we learn more about how equipment behaves in hydraulic fracturing applications, we should be able to continue increasing these components’ life.”

The oil and gas industry is taking seriously the public’s concerns about pollution and global warming, Kamp assesses. “When I talk with oil and gas producers, the conversations often focus on improving sustainability and governance,” he reports. “They want to know how they can minimize their carbon footprints while still showing strong balance sheets.”

In some areas, engines that burn a combination of natural gas and diesel can help achieve that goal. “To reduce carbon emissions, the engines need to go beyond the Tier 4 Final mandates, which focus on limiting emissions that cause health problems rather than global warming,” he notes.

Because of growing concern about greenhouse gases, Kamp says Caterpillar has designed its Tier 4 Final dual-fuel engines with a self-imposed mandate that their carbon footprint will be equal to or smaller than an equivalent diesel engine.

“That took considerable research and development because dual fuel engines burn methane, which is 25 times more potent as a greenhouse gas than carbon dioxide,” he says. “To keep the GHG footprint on par with diesel, we have to burn as much of the methane as possible rather than allowing it to escape the engine.

“There is no such thing as perfect combustion, regardless of engine type. However, we have developed technologies to optimize combustion throughout the emission cycle and keep emissions to a bare minimum,” he reports. “In fact, in many plays, our dynamic gas blending engines can shrink the carbon dioxide footprint up to 20%, which is huge.”

In addition to reducing emissions, Caterpillar’s dual-fuel solutions help pressure pumpers control costs, Wagner adds. “Diesel costs are among the top three operating expenditures for a traditional frac fleet. The latest DGB technology can reduce those costs as much as 80%,” he reports.

Before most field gas can be burned, it must be treated. Wagner says Caterpillar can provide and run treatment equipment for clients that lack the staffing to manage it internally.

In plays with abundant natural gas supplies, burning field gas can offer significant emissions reductions, Wagner says. “Providing all the power with field gas rather than diesel reduces carbon dioxide emissions as much as 30%,” he calculates.

Despite their tremendous benefits, electric fleets account for only a fraction of active spreads, Kamp observes. “The primary reason is economics,” he says. “Pressure pumping companies’ margins are tight enough that it is difficult for them to justify investing in electric fleets, especially when converting to dual-fuel engines costs so much less.”

Another barrier to e-fleet adoption is natural gas availability. It’s possible to deliver natural gas by truck, but Kamp cautions that doing so can be cost-prohibitive.

“But in areas where gas is readily available, e-fleets offer enough advantages that most large pressure pumping companies are at least dipping their toes into the e-fleet pool by building one or two,” he says. “They want to climb the learning curve now so they have the experience to run e-fleets reliably and efficiently as access to capital improves and adoption grows.”

To improve e-fleets’ economics, Kamp says Caterpillar has introduced a natural gas genset for powering frac spreads. “This generator rivals gas turbines on carbon dioxide equivalent emissions because it is extremely fuel efficient and is less sensitive to operating conditions. At the same time, it offers lower capital costs and an equal–if not better–life to overhaul.”

According to Kamp, Caterpillar is researching ways to burn hydrogen in its engines and generators. “Because hydrogen produces oxygen and water when it burns, we can shrink our engines’ CO2e emissions even more by mixing hydrogen with natural gas,” Kamp says. “In our Tier 4 Final dual-fuel engines, we can use natural gas containing as much as 20% hydrogen. In the long run, we would like to provide customers the option to burn 100% hydrogen.

“To my knowledge, no one is running on hydrogen in the field today,” Kamp says. “However, we have had many oil and gas producers ask about hydrogen’s feasibility. It’s more expensive than natural gas, but as it matures and costs come down, it may play an important role in companies’ efforts to minimize their environmental impacts.”