JOHANNESBURG, SOUTH AFRICA–On May 18, 2021, the International Energy Agency released Net Zero by 2050: A Roadmap for the Global Energy Sector, which outlines plans for the global energy sector to reach “net zero” greenhouse gas emissions by 2050.

Achieving net zero emissions means the volume of GHGs being emitted into the atmosphere will equal the amount being removed. Achieving this balance, IEA maintains, will require more than aggressive carbon-capture measures: It calls for a swift and immediate shift from petroleum energy sources to energy provided through naturally replenished sources such as wind, water and solar power.

From an environmental standpoint, this is a great concept, but we live in reality. Today in real-world Africa, this goal is not feasible, nor is it advisable. Although I agree with its data on many topics, IEA’s conclusion is flat-out wrong. Africa needs oil and gas.

One need look no further than the oil-and-gas-fueled economy of the United States to appreciate the contribution of traditional energy supplies to prosperity, and indeed, freedom.

Some of the critical steps in IEA’s plan include:

These steps assume a lot about the state of the world–assumptions that are faulty, especially for Africa. For one, it will require universal energy access by 2030, meaning that everyone has access to electricity and clean cooking. Considering that approximately 592 million Africans currently lack such access, we will be hard-pressed to flip that switch in fewer than 10 years.

IEA’s plan also relies on unprecedented investments in renewables–a substantial boost in clean energy investments from the $1 trillion made during the last five years all the way up to $5 trillion a year by 2030–and cooperation from policymakers who are unified in their efforts. In this idyllic partnership, our Western counterparts talk a good game. But the fact is, so far, these same Western countries have invested little or nothing into Africa’s renewables space. To our dismay, even the international oil companies that have tried to accept the IEA’s publicity stunt have little or no renewable projects in Africa.

“For many developing countries, the pathway to net zero without international assistance is not clear,” the Organization of Petroleum Exporting Countries wrote in response to IEA, issuing a “critical assessment” on the very same day. “Technical and financial support is needed to ensure deployment of key technologies and infrastructure. Without greater international cooperation, global CO2 emissions will not fall to net zero by 2050.”

As I have stated in the past, demonizing energy companies is not a constructive way forward, and ignoring the role that carbon-based fuels have played in driving human progress distorts public debate. We cannot expect African nations–which the Global Carbon Atlas tells us together emitted a seventh of China’s CO2 output last year, and a fourth of that of the United States–to undermine their best opportunities for economic development by simply aligning with the Western view of how to tackle carbon emissions.

China, meanwhile, appears willing to continue investing in African fossil fuel projects. This means that to keep their nations energized, African governments will have little choice but to partner with China, which has a notoriously poor record on environmental protection, despite having signed the Paris climate accord. In this scenario, China will become the most influential entity in the African oil and gas industry. Giving China (or any foreign entity) such a monopoly is a dangerous play.

Making IEA’s plan work will prevent any new oil and natural gas fields from being developed. The potential energy security risk here is twofold: Concentrated production means that demand will exceed the supply of traditional fuels, while new energy security issues will emerge, such as those relating to cybersecurity and a dwindling supply of rare earth and critical minerals. Moreover, energy insecurity brings economic insecurity and geopolitical instability.

At the same time, a ban on fossil fuel production would bring about the collapse of many carbon-dependent governments. The oil industry is the primary source of income for many African nations. Without ongoing petroleum production, or time and opportunities to cultivate new revenue sources, their economies will suffer, along with their citizens.

Interestingly, the very announcement of this road map features an admission by IEA Executive Director Fatih Birol that net zero will unhinge socioeconomic structures. “This gap between rhetoric and action needs to close if we are to have a fighting chance of reaching net zero by 2050 and limiting the rise in global temperatures to 1.5 degrees C. Doing so requires nothing short of a total transformation of the energy systems that underpin our economies,” Birol wrote.

Nevertheless, many of the world’s economies cannot bear this.

Energy officials from Australia–incidentally, an IEA member country–had plenty to say in response to IEA’s plan.

“There are many ways to get to net zero, and the IEA just looked at one narrow formula,” says Australian Petroleum Production and Exploration Association chief Andrew McConville. “The IEA report doesn’t take into account future negative emission technologies and offsets from outside the energy sector–two things that are likely to happen and will allow vital and necessary future development of oil and gas fields.”

In urging policymakers to maintain a degree of skepticism about the wisdom of the IEA road map, McConville isn’t alone. “We are bringing emissions down,” states Angus Taylor, Australia’s Minister for Energy and Emissions Reduction, “but we are going to do it in a way that ensures we have that affordable power that Australians need.”

Rather than being dictated to by entities abroad, Taylor argues that Australia must proceed at a pace that makes sense locally. And part of these local considerations includes ensuring that people have energy and jobs. IEA’s call to cease fossil fuel investment will impede both metrics.

“Global gas demand is forecast to grow by 1.5% on average per year out to 2025, providing incentive to ensure our large gas fields . . . are developed as soon as possible,” says Keith Pitt, minister for resources. “Large upcoming offshore developments . . . will create thousands of new high-wage jobs.”

While environmental causes are a major focus in the West, lawmakers in Africa’s developing countries are more concerned with living wages and supplying the continent’s growing population with basic necessities.

IEA’s plan amounts to austerity measures that will see Africans leaving petroleum resources in the ground. It essentially will brand poor Africans as criminals, or at least enemies of the environment, for using fossil fuels.

This is folly. Keep in mind the critical role that natural gas is playing in the global transition to clean energy: It is an affordable and reliable bridge to renewables and is particularly important to Africa. As I have written in the past, the African Energy Chamber’s 2021 Africa Energy Outlook report predicts African gas production and consumption will rise in the 2020s. As a result, Africa’s natural gas sector soon will be responsible for large-scale job creation, increased opportunities for monetization and economic diversification, and critical gas-to-power initiatives that will bring reliable electricity to more Africans.

These significant benefits should not be dismissed in the name of achieving net zero emissions on deadline. To tell African countries with gas potential such as Mozambique, Tanzania, Equatorial Guinea, Nigeria, Senegal, Libya, Algeria, South Africa, Angola and many others that they cannot monetize their gas, but rather should wait for foreign aid and handouts from their western counterparts, makes no sense.

What’s more, we cannot overlook the fact that renewable energy solutions are still young technologies–they are less reliable and more expensive per unit of power than tried-and-true petroleum products. Not only that, but achieving net zero by 2050 will require widespread adoption of technologies that are not even available yet.

Don’t get me wrong: I understand the importance of working toward renewables. I believe they are the future of the energy industry. However, the global energy transition must be inclusive, equitable and just. Unfortunately, the plan IEA lays out is none of these. 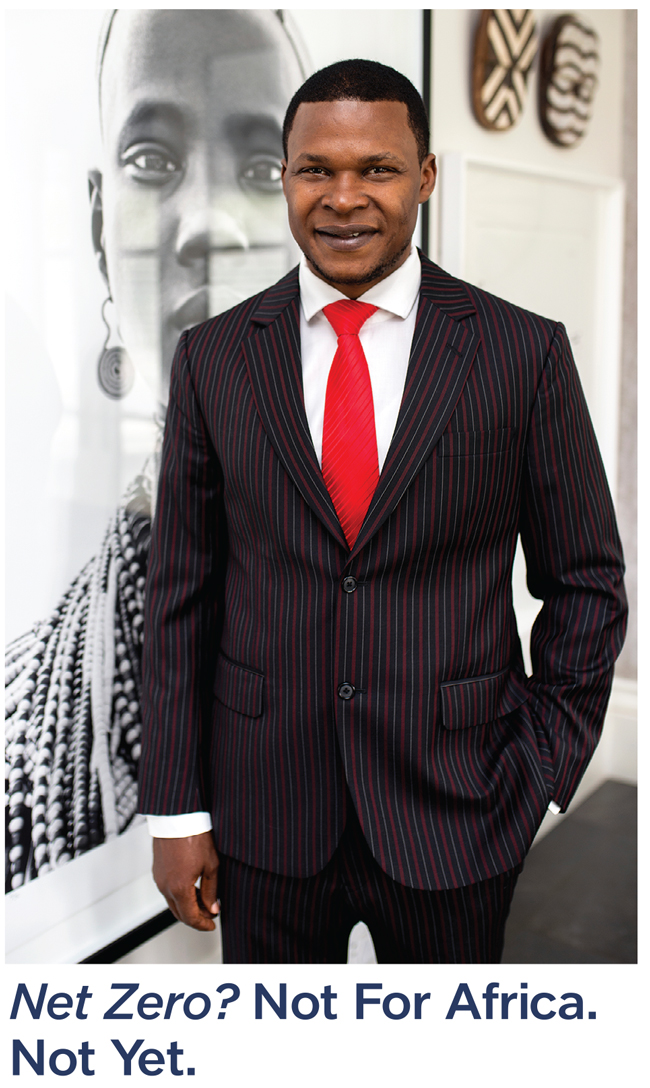 IEA is a respected institution and its opinions help shape the rhetoric of the global energy market. Instead of mandating these strict guidelines from abroad, IEA should try working with African countries to find solutions that we actually can abide. At the very least, I encourage IEA to consider partnerships with African private sector and financial institutions, whose collaboration with indigenous and international energy stakeholders provides invaluable insight from all sides across the energy industry. IEA should use its voice to push for what I always have believed Africa needs the most at this time. Free markets, personal responsibility, lighter regulation, low taxes, limited government, individual liberties and economic empowerment will boost African energy markets and economies.

Africa deserves the chance to capitalize on its own oil and gas to strengthen itself, rather than being bullied onto a path determined by Western institutions that do not face the same obstacles. We must be able to improve our energy sector by exploring our continent’s full potential in a way that benefits our people.

More oil and natural gas as the main source of energy, along with growth in renewables to augment oil and gas supplies, truly is the only path to economic stability and growth for all nations in the foreseeable future. It would be better to recognize their value and importance than to pretend humanity can exist without them. Oil and gas truly enable the advancement of health, freedom and prosperity.

Adapted for AOGR from APO Group on behalf of the African Energy Chamber.

NJ AYUK is founder and executive chairman of the African Energy Chamber, founder and chief executive officer of Centurion Law Group, author of “Billions at Play: The Future of African Energy and Doing Deals” and co-author of “Big Barrels: African Oil and Gas and the Quest for Prosperity.” He graduated from the University of Maryland and earned a J.D. from William Mitchell College of Law and an M.B.A. from the New York Institute of Technology.