While onshore unconventional plays remain firmly in the driver’s seat of U.S. activity, things are looking up in the new year for the Gulf of Mexico, according to a Wood Mackenzie report issued in mid-December.

“We expect 2019 to be a strong year for the Gulf. In addition to exciting new project sanctions, a couple of historic firsts set to occur (in 2019) could set the stage for years to come,” comments William Turner, a Wood Mackenzie senior research analyst.

What exactly is in the cards for the Gulf over the next 12 months? For starters, after four years of steady declines, Gulf exploration activity is expected to increase 30 percent compared with last year, thanks largely to the exploratory drilling programs of companies such as Kosmos Energy, Equinor, Total, Murphy and Fieldwood Energy. Moreover, Wood Mackenzie says it forecasts the first increase in regional drilling since 2014, first-ever production from a Jurassic play, key new project sanctions, and an uptick in mergers and acquisitions.

In terms of specific projects, Turner points to Chevron’s Anchor in Green Canyon Block 807. With an operating pressure of 20,000 psi, he says, Anchor could be the world’s first ultrahigh-pressure project to reach a final investment decision. “The sanctioning of Anchor would be a significant milestone for Chevron, Total and Venari Resources, but also mark a crucial point for the offshore industry as it enters the final frontier in deepwater development,” he states.

If sanctioned, Anchor would represent the culmination of more than a decade of multiple joint industry research and development projects to develop the technologies to safely produce fields at 20 ksi, Turner says. More importantly, he adds that success at Anchor would open the way to the next wave of “mega-investment” in the Gulf, with several more 20-ksi projects waiting to follow its lead. In fact, if Anchor moves forward, Wood Mackenzie estimates that more than $10 billion of investment could flow into the region.

“Proof of concept at Anchor, and more certainty around facilities to serve as hosts, surely will increase interest in discovered fields,” he comments. “We expect it also will invite more exploration for ultrahigh-pressure targets. Even so, with higher technical risk and higher break-evens, market conditions would have to align for it to become a reality.”

A “potential heavy hitter” project scheduled for startup in 2019 is Shell’s Appomattox in Mississippi Canyon Block 392, the first Gulf development to target Jurassic-age sands. “If the Jurassic roars to life in 2019, it could give operators greater confidence in the play’s potential,” Turner avers. “However, if Appomattox disappoints, the Jurassic could continue to lie dormant. The wider region also would be missing an expected strong production growth contributor.”

Gulf M&A deal making should intensify as private equity players sell assets approaching maturation and established players shed noncore positions to focus on high-priority projects, Turner reasons. “There appears to be plenty for sale in the deep water,” he observes. “We believe the quality of the assets is high. If oil prices cooperate, we could see a thriving M&A market.”

Looking further out, Turner suggests the industry’s ability to maintain the efficiency gains made through standardization and lean operations will be critical to sustaining increased deepwater investment levels. “Reverting to inefficient ways of doing things is a real threat that operators need to look out for,” he cautions. “The challenge to operators and the service sector alike will be to hold onto lessons learned, mitigate efficiency risks where possible, and properly plan for higher costs and longer schedules where unavoidable.” 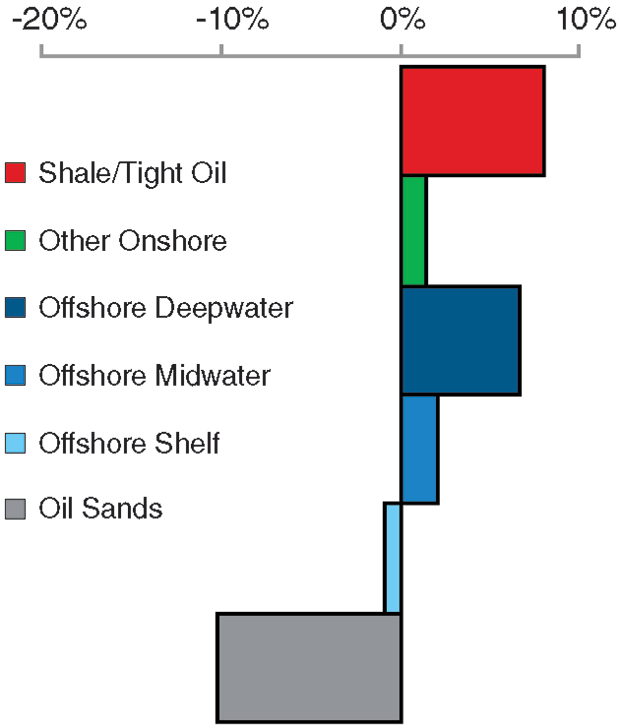 “We expect offshore investments to grow at an average of 2 percent and finally spawn an increase in revenues for offshore-exposed service companies. We forecast that more than $200 billion worth of projects will be sanctioned next year, including as many as 100 offshore projects, thus setting the scene for higher service prices,” the report states.

That compares with 94 offshore projects sanctioned in 2018, when more projects were green-lit during the first nine months than in all of 2017, according to Rystad. “The famine is over for key regional jackup markets and day rates have improved,” the report declares. “In the U.S. Gulf of Mexico, for instance, rates are back at the $80,000/day mark.

“The standardization of offshore production platforms means cost cuts can still be realized by operators despite increased unit prices. Investors should appreciate the wave of projects to be sanctioned over the next years, although there are significant variances among the majors,” the report goes on.

Looking at global onshore activity in 2019, Rystad projects that capital investment outside shale plays will grow only 1 percent. Geographically, the greatest growth is anticipated in Africa, South America and the Middle East, as green-field activity picks up in Mozambique, Brazil and Saudi Arabia.

All in all, Rystad says 2018 was a good year for the global oil field services sector, including for offshore sectors such as subsea equipment, maintenance and operations services, and floating production, storage and offloading systems. However, it points out, there were some notable negatives. An example is development of the Lake Albert Field in Uganda, where project sanctioning was delayed until this year, stalling $8.5 billion in contract awards.

A separate Rystad report issued in November forecast that more than 72,000 wells would be drilled and completed in 2019, representing 3 percent growth over 2018 (Figure 2). “Since 2016, drilling and completion activity has grown 30 percent, and we expect activity to grow at an average annual rate of 4 percent toward 2021,” the report reads.

“Understanding the characteristics of the activity is crucial for understanding how the drilling and well services market will develop. With offshore drilling (increasing), offshore driller purchases are expected to grow the most at an average annual rate of 9 percent to 2021. Driven by shale, land driller and stimulation services purchases are expected to grow 7 and 6 percent, respectively.”