In late April, the U.S. Department of Energy issued two long-term orders authorizing additional liquefied natural gas exports from two projects of the U.S. Gulf Coast: the Golden Pass LNG terminal in Texas, a joint venture between QatarEnergy and ExxonMobil, and the Magnolia LNG terminal in Louisiana, owned by the Glenfarne Group.

Golden Pass is located on the Sabine-Neches waterway. It is an existing import terminal being converted into an export facility. The first of three planned liquefaction trains with total output capacity of 16 million tons per annum (mtpa) is scheduled to come on stream by 2024. The U.S. Federal Energy Regulatory Commission approved the transformation of Golden Pass in December 2016.

Magnolia is a 115-acre site near the Calcasieu Ship Channel with a planned 8.8 mtpa of export capacity from four LNG trains. Glenfarne, a U.S.-based fund specializing in energy infrastructure investment, acquire Magnolia from the original Australian-listed developer, which ceased trading amid financial difficulties.

Even with new U.S. export capacity on the horizon, a report issued by Rystad Energy in early May says a “perfect and unavoidable storm” is creating a global LNG supply crisis that will meaningfully materialize next winter-especially for European consumers in the wake of Russia’s invasion of Ukraine.

Rystad’s analysis shows demand outstripping supply by the end of this year. Although soaring demand has spurred the greatest rush of new LNG projects worldwide in more than a decade, Kaushal Ramesh, Rystad’s senior analyst for gas and LNG, says new terminal construction timelines mean material relief is unlikely until sometime after 2024.

Global LNG demand is expected to hit 436 million tons in 2022, outpacing the available supply of 410 million tons. With Europe seeking to limit Russian gas flows as part of sanctions package put in place in response to the Ukrainian invasion, supply imbalances and high prices will set the scene for the most bullish environment for LNG projects in more than a decade, Ramesh observes.

The European Union’s REPowerEU plan has set an ambitious target to reduce dependence on Russian gas by 66% this year, an aim that clashes with the EU’s goal of replenishing gas storage to 80% of capacity by Nov. 1.

“By shunning Russian gas, Europe has destabilized the entire global LNG market that began the year with a precarious balance after a tumultuous 2021,” Ramesh states in a Rystad report. “The decision to sharply reduce reliance on Russian gas and LNG from current levels of 30-40% will transform the global LNG market, resulting in a steep increase in energy-security based European LNG demand that current and under-development projects will not be able to supply.”

In 2021, Russia exported 155 billion cubic meters of gas to Europe, providing more than 31% of the continent’s supply. Replacing a significant portion of this will be exceedingly difficult, with far-reaching consequences for Europe’s population, its economy, and the role gas will play in the region’s energy transition, Ramesh says. He adds that it also will likely create a boom for LNG suppliers of a scale and duration not seen in more than a decade. 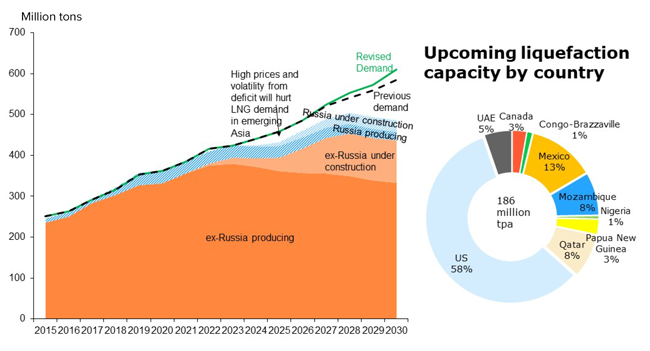 “There simply is not enough LNG to meet demand. In the short term, this will make for a hard winter in Europe. For producers, it suggests the next LNG boom is here, but it will arrive too late to meet the sharp spike in demand. The stage is set for a sustained supply deficit, high prices, extreme volatility, bullish markets, and heightened LNG geopolitics,” Ramesh remarks.

Prior to the Ukrainian invasion, Europe was on course to increase Russian imports of gas and LNG to over 40% of its supply by 2030 if the now stalled Nord Stream 2 pipeline had been approved. Instead, Russian imports are projected to drop to 20% of total supply by 2030 as current contracts are not renewed, according to Rystad’s analysis. To facilitate additional LNG imports, a slew of regasification terminals has been planned across Europe, including some previously abandoned proposals.

“If Russian flows were to stop tomorrow, the gas currently in storage (±35% full) would likely run out before the end of the year, leaving Europe exposed to a brutal winter,” the report reads. “Under this scenario, in the absence of joint buying arrangements and countries competing for limited molecules, the TTF gas price could climb to more than $100/MMBtu, resulting in industrial curtailments and widespread fuel switching in the power sector. We have already seen curtailments to fertilizer, steel and paper manufacturers in Europe, underscoring the economic pain that awaits. In an extreme scenario of a severely cold winter, not even the residential sector would be safe.”

More than 20 LNG projects with a combined capacity of over 180 mtpa have reported some development progress. To be certain of LNG supply in 2030, the market will need more than 150 mtpa of production from the 186 mtpa of new capacity planned, which means more than 80% of the project pipeline must be realized.

U.S. LNG exports were already at historic levels even before Russia’s invasion of Ukraine. U.S. projects are in the pole position to meet future demand, Ramesh observes, including some projects that had been dormant waiting for demand to rise, and have now been given new life.

“Projects such as Energy Transfer’s Lake Charles and NextDecade’s Rio Grande that were previously on ice have reported 9.45 mtpa worth of deals after the invasion, including an about-face deal by French player Engie, which pulled out of negotiations with NextDecade in November 2020 but recently closed a 1.75 mtpa deal with the same project.”

However, the project pipeline globally remains far from able to rescue the market. It includes the 15 mtpa Rovuma Area 4 LNG project, to be located adjacent to TotalEnergies’ Area 1 LNG in the currently at-risk Palma region of Mozambique. Rystad says it expects little to no progress on the project until TotalEnergies resumes construction.

Mexico is also well-positioned for Asian exports due to geographical proximity and non-dependence on transit through the Panama Canal, and appears to be gaining momentum among Asian buyers, according to the report. At the same time, higher prices will slow Asian LNG demand growth in the medium term, which means the continent will remain dependent on fuel oil and coal. In some scenarios, Asian LNG demand may be permanently dented, and deployment of renewables accelerated, Rystad cautions.