Furthermore, responding to robust demand and crude oil prices touching their highest levels in seven years, EIA reports that U.S. crude oil production is also on the rise, and is forecast to eclipse the 12.3 MMbbl/d pre-pandemic peak set in 2019. On November, U.S. output surged to 11.8 MMbbl/d, the most in any month since April 2020. For full-year 2022, the agency projects production climbing to an average of 12.0 MMbbl/d and then continue growing to a new historical annual high of 12.6 MMbbl/d in 2023.

To absolutely no one’s surprise, the Permian Basin is leading the impressive rebound in U.S. oil production. EIA data indicates that for the first time in its long history the Permian is producing more than 5 MMbbl/d–a stunning five-fold increase over the past decade.

“Field level datapoints in recent weeks have highlighted a surge in fracturing activity, which we believe will translate into a production inflection by mid-year,” the firm wrote. “The industry is finding (and we think will continue to find) a way to put plenty of service activity into the field.”

Exxon Mobil Corp. said in early February that it plans to increase output by 25% this year in the Permian, and Chevron Corp. signaled that it plans to ramp up its Permian production by 10%.

Permian operators are achieving that growth through increased activity as well as increased per-well productivities, points out Rystad Energy. The average productivity of new wells in the basin is poised hit a record high this year, in large part because of increasing completed lateral lengths, according to Rystad. 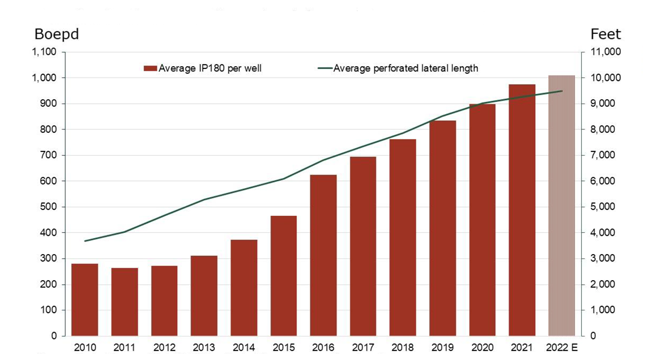 “New wells are expected to break the 1,000 barrels of oil equivalent a day threshold for the first time on record, rising from the 974 boe/d achieved in 2021,” Artem Abramov, head of shale research, stated in a report. “Average daily production levels have steadily climbed since 2010, closely aligned with horizontal well length, which is expected to reach 9,500 feet in 2022.”

The total completed lateral footage of wells in the Permian is expected to reach a record 50 million feet in 2022, beating 2021’s total of 45.8 million feet and racing past pre-pandemic levels of 47.5 million feet in 2019. Abramov notes that operators only started using ultra-long laterals wells of up to three miles in length in the basin in 2014, but their popularity has quickly grown.

“Their market share has rocketed in recent years, representing only 4% of completions in 2017 versus 18% in 2021. However, considering total completed lateral footage in 2021, these wells accounted for as much as 23% of completions,” he says.

The average horizontal well length in the Permian increased to 9,300 feet in 2021, up from 9,000 feet in 2020, and bucking the overall trend of average US shale well lengths, which stayed relatively stagnant. This increase signals a growing trend among operators to favor longer wells with an eye on increased productivity, according to Abramov.

“The Permian is now entering a three-mile lateral era,” he comments. “Such long wells were viewed as inferior for their high finding and development costs in some deeper zones just a few years ago, but modern equipment and completion methods allow extended reach wells to spread across the entire basin.”

The perforated length of the horizontal section of a well has always been viewed as a critical driver of well productivity and costs. When unconventional development began, horizontal well lengths were short, with most under 5,500 feet, the equivalent of about a mile. As technology and mechanical capabilities have advanced, well lengths have increased, helping new wells be more productive, Abramov explains. Well productivity is measured over the first 180 days after a well starts producing oil due to the front-loaded nature of unconventional oil production.

Lateral footage of individual wells has expanded as operators increase efficiency and boost production. However, it may be too early to view the increase in ultra-long laterals between 2.5 and 3.0 miles as an industrywide trend in the Permian, Abramov relates, pointing out that some key operators contribute to this segment with a disproportionally large weightage relative to their total number of completions.

For example, he says Pioneer Natural Resources–the largest operator in the basin–accounted for 12.6% of total Permian horizontal completions in 2020-21, including wells originally completed by DoublePoint Energy, Parsley Energy and Jagged Peak Energy (all of which were acquired by Pioneer). Yet, Pioneer accounted for as much as 18.6% of completions with a perforated length greater than 12,500 feet.