ODESSA, TX.–Proper well spacing is critical to the economics of unconventional reservoir development. In the Wolfcamp formation in the Delaware Basin, well spacing varies with formation characteristics (rock and fluid) across the play. Getting the spacing intervals between horizontal wells right is crucial to maximizing productivity and estimated ultimate recovery while avoiding detrimental frac hits and cross-well pressure and fluid interferences during stimulation and production.

From a production standpoint, infill Wolfcamp child wells have tended to underperform relative to their offset parent wells, sometimes by a significant margin. One Delaware Basin study found that when a child well was drilled within 1,000 feet of an older well, the parent outperformed the new child by 66%. When the comparison was adjusted for high-intensity completions with higher fluid and proppant volumes, 79% of older Wolfcamp wells performed better than offset child wells.

If well density or lateral spacing is too tight, it could lead to negative well interference issues between neighboring laterals from fracture-driven interactions (FDIs), or frac hits, which could degrade the productivity and recovery factors of parent and infill wells. Improper spacing has resulted in numerous cases of well interference and FDIs in horizontal wells in the Wolfcamp section in both the Delaware and Midland basins. Nearly 10% of these cases have resulted in critical productivity loss.

Increasing density/spacing between parent and child wells can improve EURs per well to a point, but on the other hand, production per section/lease will decrease as fewer wells are drilled to drain the section, potentially leaving the reservoir volume understimulated.

So, what is the optimal spacing and number of wells per section (WPS) in Wolfcamp plays? Determining the answer for a given section is complicated by a number of considerations and parameters, and many types of information are required to understand how a number of variables impact spacing.

An oil and gas producing company approached University of Texas Permian Basin researchers with the objective of better understanding the minimum and maximum WPS and ideal spacing between horizontal wells. In response, a new analytical model has been developed to optimize spacing effectiveness. The model is based on data obtained from private parties for 201 horizontal wells completed in Wolfcamp A through D benches in the Delaware Basin. This approach can be used to quickly predict optimal well spacing across the Delaware Wolfcamp trend.

Designing a well spacing optimization strategy requires taking a number of potential parameters and variables into consideration. As part of the workflow, various reservoir and completion design parameters such as permeability, fracture width and height, drainage area, reserves, and recovery factors were estimated according to patterns discovered by transient flow rate analysis. A total of 209 variables were identified from the dataset, and the analysis ultimately focused on 32 variables of highest importance.

A pool of independent (input) variables from the well dataset was analyzed to develop the model and predict optimal spacing (the dependent variable). Some of the variables considered were oil and gas EUR, initial and cumulative oil and gas production, gas-to-oil ratios, pounds of proppant, true vertical depth, injected fluid volume, etc. The spacing model correlates the spacing variable “rectangular overlap area” (ROA) to the well EUR and IPs.

Analytics with scatter-diagram smoothing was used to develop a relationship between 150-day EUR and IP and the rate of overlap among laterals, demonstrating the effect of stacked reservoirs on both EURs and IPs. The interactions can shed new light on the relationships between parent and child wells when planning infill development.

The impacts of FDIs are intricate and require advanced numerical modeling to account for fracture propagation and depletion effects due to varied spacing sets to reduce negative effects on productivity and EURs. Oil recovery is a function of numerous parameters, including well spacing and fracture designs. These variables include but are not limited to:

Spacing Versus IP And EUR

Spacing Between Two Adjacent Laterals versus Wells per Section 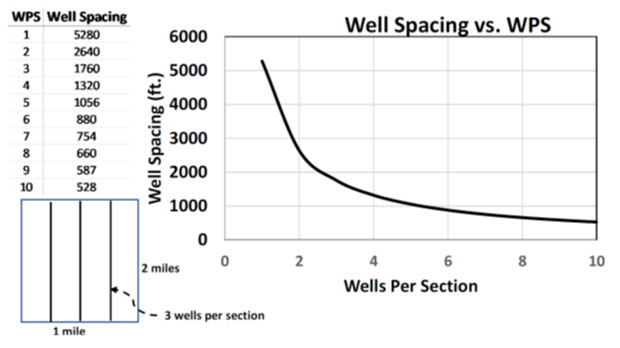 Matrix software was used to calculate the stacked spacings using the key parameters. As can be seen in Figure 2, EUR declines with the increase of overlap between horizontal wells because of well interference. EUR shows a linear relationship initially for an overall range of 0-50%, then decreases sharply due to increased well communication. 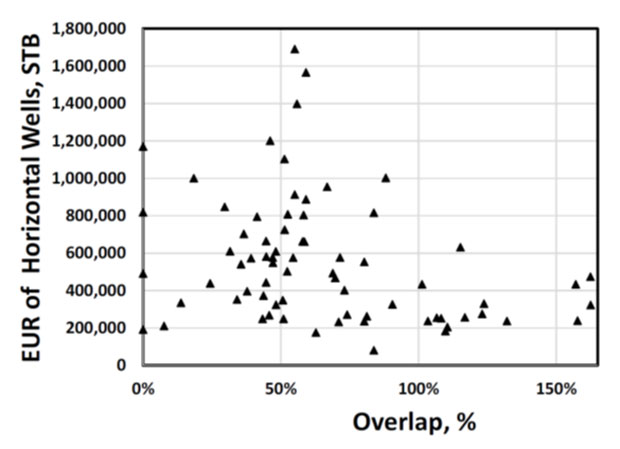 Figure 3 displays log-scale scatterplots of ROA versus the average of oil IP for 150 days and oil EUR on the y-axis after smoothing. These plots suggest that maximum values for both 150-day IP and EUR are obtained when ROA is 12.5, which implies an optimum ROA of 268,337 square feet. 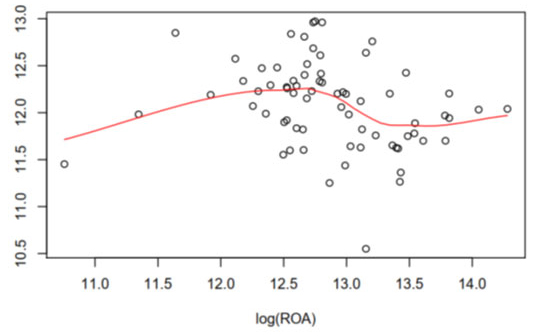 The results show a good correlative fit (95% confidence interval) between 150-day oil IP and EUR, and at least in this area of the Delaware Basin, the relationship between spacing (ROA) and well performance is clear. The work suggests that the higher the overlap (>60%) between wells, the lower the expected IP and EUR from the well. This leads to linear spacing between laterals of 1,580 feet.

Applying the outcomes from the model can lead to optimal spacing decisions for the stacked Delaware Basin, and contribute to better understanding the development of future infill wells. The findings and correlations within the Wolfcamp are now being applied to various sections and formations across the Permian Basin.

Editor’s Note: The authors thank Wade Baustian, a reservoir engineer at Camino Natural Resources, for his assistance, and acknowledge Cimarex Energy Co. for providing the data used in the study.

ABDALLAH HAROUAKA is chairman of the petroleum engineering department at the University of Texas Permian Basin. With more than three decades of experience in academia and industry, he holds a Ph.D. in petroleum and natural gas engineering from Pennsylvania State University.