WASHINGTON–Demand for natural gas is expected to jump to historical highs this summer, according to the Natural Gas Supply Association.

Driven by increased consumption in electric generation, NGSA says combined demand from the electric, industrial, residential and commercial sectors is projected to average a record 69 billion cubic feet a day.

“When NGSA weighed the various factors, the picture that emerged for the upcoming summer was one of remarkable growth in demand,” says NGSA President Dena Wiggins. “We anticipate electric demand for natural gas to reach record levels this summer, topping last year’s record.”

While demand from the industrial sector is expected to increase only slightly, and residential and commercial demand is expected to hold steady from last summer, Wiggins reports the electric sector is forecasted to increase by 11 percent this summer compared with last summer. About 70 percent of the increased demand can be attributed to a permanent shift to natural gas-fired power generation caused by operators retiring large numbers of coal-fired power plants, she says, adding that the remainder of the increase in the electric sector is related to short-term coal-to-gas fuel switching.

Despite the demand growth, however, pressure on seasonal natural gas prices is likely to be downward compared with summer 2015, considering all the supply and demand variables, Wiggins reports. Those factors include:

“The shale revolution has ushered in a remarkable era, as evidenced by dramatic growth in production over the past eight years,” Wiggins relates. “Despite fewer drilling rigs, this summer’s supply is expected to match last summer’s because of drilling efficiencies, new infrastructure coming on line to move natural gas out of producing shale areas, and the completion of many onshore and offshore wells.”

While global liquefied natural gas shipments are expected to become a significant component of U.S. natural gas exports in time, Wiggins notes that pipeline deliveries to Mexico account for the majority of U.S. export volumes. Given the completion of new pipeline projects on both sides of the border, which facilitate growing demand for gas-fired electricity and manufacturing in Mexico, she says exports are projected to increase to 4 Bcf/d this summer.

“The important take-away is the strength and responsiveness of natural gas supply,” Wiggins concludes. “Since the onset of shale production on a large scale, we have had year after year of stability for consumers.”

In the Mid-Atlantic, EIA says many natural gas capacity additions are concentrated around the Marcellus and Utica regions of Pennsylvania, West Virginia and Ohio. Virginia accounts for the largest cumulative additions of gas-fired capacity in 2016-18, with 2.3 gw of gas-fired capacity under construction, followed by Ohio with 1.9 gw, Pennsylvania with 1.8 gw, and Massachusetts with 0.7 gw, according to EIA. 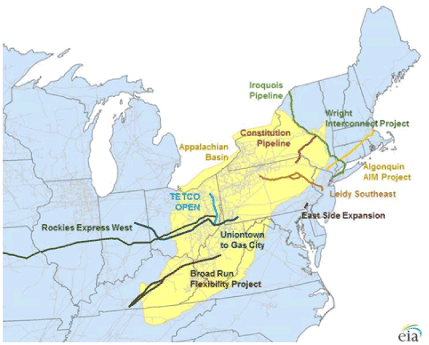 Expanding pipeline networks in the Northeast (Figure 2) are increasing take-away capacity from the Marcellus and Utica shale plays, supporting the growth in natural gas-fired generating capacity. In 2015, EIA reports, 6.0 Bcf/d of new Northeast pipeline take-away capacity was commissioned to transport natural gas to the east, south and west from the Marcellus and Utica. In 2016, 2.2 Bcf/d of new pipeline capacity is scheduled to come on line in the region, according to EIA data.

Significant levels of natural gas-fired capacity also are under construction in Texas, with 3.2 gw expected to become operational by 2018, EIA continues, while Florida has the largest cumulative additions of gas-fired capacity under construction with three plants totaling a combined 3.8 gw that are expected to enter service within the next couple years.