WASHINGTON–The International Maritime Organization’s pending regulation limiting the sulfur content in marine fuels will have both short- and long-term ramifications on global markets, according to a new report from the U.S. Energy Information Administration.

With an effective date of Jan. 1, EIA says both the shipping and refining industries have already begun making preparations to accommodate IMO 2020. “The change in sulfur limits has wide-ranging repercussions for the global refining and shipping industries, as well for petroleum supply, demand, trade flows and prices,” the report reads.

IMO 2020 requires all ocean-going vessels to use fuels with a maximum sulfur content of 0.5 percent by weight, a considerable reduction from the previous limit of 3.5 percent by weight established in 2012. “As the implementation date for the 0.5 percent sulfur cap approaches, shifts in petroleum product pricing may begin as early as mid- to late 2019,” EIA contends. “The effects on petroleum prices will be most acute in 2020, and the effects on prices will be moderate after that. However, the regulations will affect petroleum supply, demand and trade flows on a more long-term basis.”

Marine vessels account for 4 percent of global oil demand (4.3 million barrels a day). In the United States, consumption of bunker fuel is a relatively small share of total energy demand, the agency notes. In 2018, U.S. bunker fuel represented 3 percent of total transportation energy consumption and only 2 percent of total U.S. petroleum and liquid fuel usage. Of the 4.3 MMbbl/d of global marine sector demand, about 10 percent of those sales originated at U.S. ports.

Residual oil (the long-chain hydrocarbons remaining after lighter and shorter hydrocarbons such as gasoline and diesel have been separated from crude oil) accounts for the largest component of bunker fuel. Although distillate fuels, the other large component in bunker fuel, have alternative uses and markets outside of marine fuels, residual oils have few alternative markets. In fact, 80 percent of total U.S. residual fuel demand is for marine bunkering, according to EIA. Therefore, the compliance steps vessel operators take in regard to IMO 2020 have major implications for residual fuel oil prices and for the refineries that produce residual fuel oil.

Marine vessel operators have several options for complying with the new sulfur limits. They can switch ships to a lower-sulfur fuel, which would likely increase demand for distillate and low-sulfur residual oils. Another option is to use scrubbers to remove pollutants from ships’ exhausts, allowing them to continue using higher-sulfur fuels. Vessel operators can also switch to liquefied natural gas.

EIA says the use of LNG in marine bunkering will be limited through 2024, reflecting the high initial infrastructure development cost and the limited current infrastructure to accommodate LNG bunkering at U.S. ports. “In the medium and long term, this infrastructure barrier should decrease, and LNG’s share of U.S. bunkering is expected to grow to 7 percent in 2030 and to 10 percent by 2050,” the report projects. 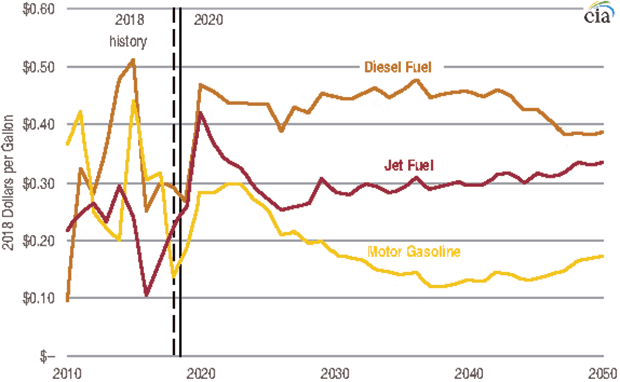 EIA says the increased margins will prompt U.S. refiners to produce more diesel in one of two ways: increasing diesel yields and increasing overall refinery throughputs. With many U.S. refineries having downstream units that upgrade residual oils into more valuable and lower-sulfur products such as diesel (especially on the Gulf Coast), these facilities can economically process heavier and higher-sulfur crude oils that yield large quantities of residual oils for further processing, the report assesses.

“They will be well positioned to supply the global marine fuel market with low-sulfur bunker fuel. As refiners maximize diesel fuel production, average distillate fuel refinery yields will increase from 29.5 percent in 2018 to 31.5 percent in 2020,” the report offers.

The increase in diesel yields will largely come from a shift away from motor gasoline and residual fuel oil. According to the EIA’s analysis, gasoline yields will fall from an average of 47.0 percent in 2018 to an average of 45.6 percent in 2020, although some shift back to gasoline production is expected post-2020 as margin differences between diesel and gasoline narrow.

In addition to shifting production toward diesel fuel, EIA says U.S. refiners are also expected to increase their overall throughput of crude oil. The report estimates that gross inputs into domestic refineries will increase from an average of 17.3 MMbbl/d in 2018 to a record level of 17.8 MMbbl/d in 2020. “This would result in refinery utilization increasing from an average of 93.2 percent in 2018 to 95.4 percent in 2020,” the report reads.

A 95.4 percent utilization rate would be the highest since 1998, and could put enough stress on the refining sector that it “might only be sustainable for about a year” before U.S. refinery utilization begins easing back to 93.7 percent in 2021, according to the report.

EIA expects much of the increase in diesel fuel production and other refined products from higher U.S. refinery runs will be exported. As refiners export diesel to supply an increasing share of the global demand for low-sulfur bunker fuel, EIA says it sees gross U.S. exports of diesel and residual fuel rising from 1.2 MMbbl/d in 2018 to 2.6 MMbbl/d in 2020, with net diesel exports gradually decreasing beginning in 2021 as the global shipping industry adopts scrubbers. 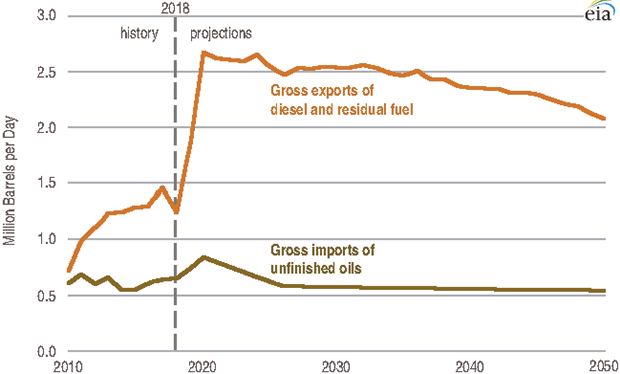 As a caveat to the projected impacts of IMO 2020, the reports concludes: “The effects of implementing IMO 2020 regulations are highly uncertain. Many policy and technical complications, as well as potential market participant responses, create numerous interrelated factors that will have a significant influence on the eventual outcome. Furthermore, these factors are highly interdependent on one another, making cause and effect difficult to disentangle.”