PITTSBURGH–Drilling fluids serve a variety of purposes, and can be formulated to serve those drilling needs that require careful balancing of often contradictory requirements. Although water-based systems are the most common and often the preferred type of drilling fluid, they are suitable only for drilling operations with relatively low temperatures and pressures.

Consequently, oil-based fluids typically are employed for the more severe requirements of high-temperature/high-pressure drilling. According to the U.S. Department of Energy Deep Trek program, an HT/HP drilling operation is defined as one where the bore hole static temperature exceeds 350 degrees Fahrenheit and the pressure is in excess of 25,000 psi. However, more severe drilling conditions can be expected as drilling depth increases, with temperatures exceeding 600 degrees and pressures to 40,000 psi.

The thermal degradation of polymeric additives leads to loss in rheological properties, which can cause serious operational problems such as barite sag. Oil-based fluids are more susceptible to barite sag at HT/HP conditions. In oil-based fluids, the solid phase contains viscosifiers such as organophilic clays and weighting materials such as barite to adjust fluid density, in addition to drilling solids. Under high temperatures and pressures, however, the polymeric components of drilling fluids are likely to experience thermal degradation that breaks down the emulsion and fluid phase separation. This can cause serious operational problems, including the undesirable phenomenon of barite sag.

Therefore, developing oil-based fluids that maintain their morphology and rheological properties during HT/HP operations remains a key objective for the oil and gas industry, and requires utilizing nonpolymeric additives such as nanoparticles.

Nanoparticles can be used to stabilize water-in-oil emulsions in place of polymeric surfactants. Similar to surfactants, nanoparticles and microparticles also can be hydrophobic, hydrophilic, or amphiphilic. They can exhibit a large free energy of adsorption and attach themselves to the oil/water interface, especially for particles of intermediate wettability. Also, relatively hydrophilic particles tend to form oil-in-water emulsions, while using relatively hydrophobic particles results in water-in-oil emulsions.

Microparticles and nanoparticles of various shapes, sizes and surface characteristics are available commercially, and can be employed to impart stability to invert emulsions used as drilling fluids. Hydrophobic nanosilica and organically-modified bentonite clay both have been used to stabilize water-in-oil emulsions.

However, this article focuses on research to examine the effect of using a combination of hydrophobic nanosilica and organically-modified nanoclay on the rheology of invert emulsions. This work was performed to support the National Energy Technology Laboratory’s ongoing research in nanofluids for oil and gas deep-hole drilling under the URS activity number 4.640.920.002.

Poly 1-decene, an olefin oil, was used as a continuous phase for invert emulsions. It was purchased from Sigma-Aldrich, and had a viscosity of 0.8 poise, a density of 833 kilograms per cubic meter, and a boiling point of 316 degrees Celsius. The dispersed phase was deionized water. Organically-modified nanoclays were obtained from Southern Clay Products. The montmorillonite-based clays are modified by various organic cations to make them hydrophobic for easy dispersion in nonpolar media. Depending on the nature of the organic treatment, the clays can have varying degrees of hydrophobicity.

The nanoclays used in this work, in increasing order of hydrophobicity, were Cloisite 30B, Cloisite 25A, Cloisite 20A and Cloisite 15A. The hydrophobic nanosilica particles provided by Evonik-Degussa were Aerosil® R104 (12 nanometers), Aerosil R106 (7 nm), Aerosil R974 (12 nm) and Aerosil R972 (16 nm). According to the manufacturer, Aerosil R104 and R106 are treated with octamethylcyclotetrasiloxane, while R 974 and 972 nanosilica particles are treated with dimethyl dichlorosilane to make them hydrophobic.

For purposes of comparison, Witcomul® 3158, an oil-soluble sulfonate emulsifier for invert emulsion drilling fluids, was obtained from Akzo-Nobel. Excalibar™ brand API-grade Barite supplied by Van Horn, Metz & Co. Inc. was used as the weighting agent. It had a specific gravity of 4.2 and a median size of 15 micrometers.

Invert emulsions were prepared by emulsifying water in a nanoparticle containing oil. First, a calculated amount of nanoclay was dispersed in 70 milliliters of oil and ultrasonicated for 20 seconds using a high-intensity, 750-watt power ultrasonic horn, and then left overnight for dispersion to take place. The required amount of nanosilica was added the following day, and the mixture was ultrasonicated again for 20 seconds. The dispersion rested for at least 24 hours.

To prepare the emulsion, 30 milliliters of deionized water was added slowly to the oil dispersion while homogenizing at 24,000 rpm for two minutes by high-speed stirring with an IKA Ultra Turrax™ rotor-stator mixer. Water must be added slowly, rather than in bulk, since all the water may not emulsify and a portion of it may form a separate phase. A white, gel-like emulsion was obtained. This was left to rest for 24 hours for equilibration and to allow time for water to hydrate the nanoclay before making any measurements.

It should be noted that the nanoparticle content reported here is on the basis of oil content and not the total amount of emulsion. For surfactant containing emulsions, the surfactant was added in place of nanosilica particles to the nanoclay-oil dispersion, and then water was emulsified.

The morphology of the emulsion (i.e., the dispersed phase size and size distribution) was characterized by using an optical microscope fitted with a digital camera. ScionImage software was used to capture and analyze the images. A standard grating was used to calibrate the images. Because the emulsions were concentrated to observe directly, they were diluted with additional oil for the microscopy work. Washed and dried barite was added to the invert emulsions while stirring with the high-speed homogenizer to give the weighted fluids a specific gravity of 1.3 or 1.5.

Rheology measurements were carried out to determine yield stress and the plastic viscosity of these model drilling fluids, using a Carri-Med CSL100 stress-controlled rheometer fitted with parallel plate fixtures. Before making measurements, all the samples were presheared for one hour to impart a common shear history. This was followed by 10 minutes of rest. Then stress ramp-up and ramp-down experiments were performed to obtain flow curves, from which the yield stress and plastic viscosity could be calculated. All rheology measurements were carried out at 25 degrees C.

High-temperature aging of the model drilling fluids was carried out at 225 degrees C, using a 500-milliliter Fann aging cell. The cell was pressurized to 500 psi by nitrogen gas to prevent the water contained in the drilling fluid from evaporating. The pressurized cell was placed in a preheated oven for 96 hours for static aging. The aged drilling fluids were depressurized once the contents of the cell had cooled to room temperature. The aged emulsion was degassed in a vacuum chamber before being examined for rheology and morphology properties.

Drilling fluids should exhibit a gel structure with apparent yield stress to prevent suspended solids such as hole-cuttings and barite particles from settling, should flow be stopped for any reason. However, the gel structure should disintegrate quickly once flow is restarted. In other words, a drilling fluid should have a high viscosity at low shear rates to keep solids in suspension, but a low viscosity at high shear rates. Such behavior is obtained by adding polymeric additives and clay particles that form a long-range, three-dimensional network that breaks down on applying a shear stress, but quickly rebuilds when flow ceases.

Several simple models are available to represent yield stress fluids. Although none of the models fit the experimental data perfectly, the Casson equation was found to be the best for the drilling fluids described in this work. 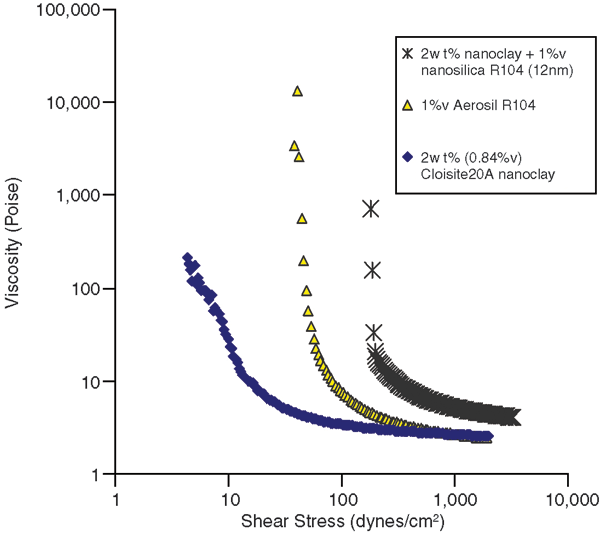 The morphology of these emulsions reveals that large droplets were obtained for the emulsions containing nanoclay. The droplet size was much smaller for emulsions containing hydrophobic nanosilica, and was comparable to emulsions prepared with a polymeric surfactant. Yield stress and plastic viscosity values for these emulsions made it clear that there was a synergistic effect of nanoclay and nanosilica on the yield stress. It also should be noted that the nanostabilized fluid has comparable properties to the surfactant stabilized emulsion.

The effect of the relative hydrophobic/hydrophilic nature of the nanoclay on the rheological properties of the invert emulsions was then investigated. To see the effect of nanoclay hydrophobicity, invert emulsions containing 4 percent nanoclay and 0.5 percent nanosilica by volume were prepared. The nanosilica was Aerosil R104 in all emulsions, and the organically-modified nanoclays were Cloisite 30B, 25A and 15A. 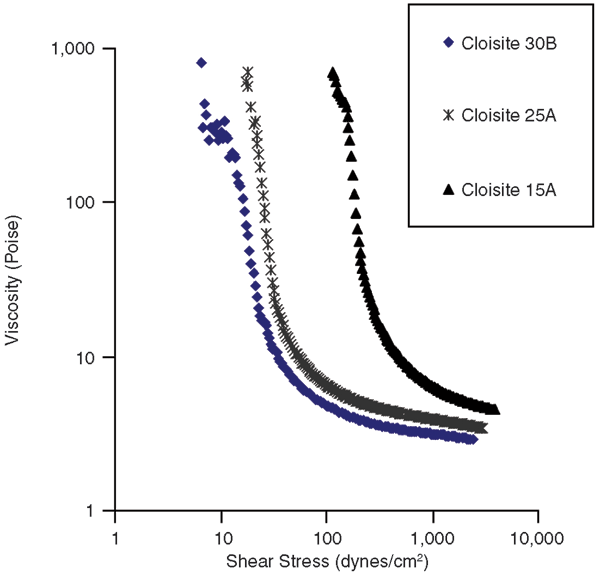 As indicated in Figure 2, the ease of dispersion of nanoclay had a very significant effect on the yield stress and the viscosity of these emulsions. This can be expected, since the exfoliation of the nanoclays results in better dispersion of nanoplatelets in the oil, which helps in forming a gel network. It also helps to stabilize emulsion droplets, since it is easier for the nanoplatelets to approach the water/oil interface than in the form of large aggregates.

To investigate the effect of nanosilica hydrophilic/hydrophobic characteristics, invert emulsions stabilized by only 1 percent nanosilica by volume were prepared. Figure 3 shows flow curves for Aerosil R104 and R974. Aerosil R104 and R974 have the same nanoparticle size (12 nm), but R974 is less hydrophobic, meaning it has more hydroxyl sites on the particle surface to form hydrogen bonds to build a long-range gel structure. Therefore, R974 is more effective in developing a yield stress. 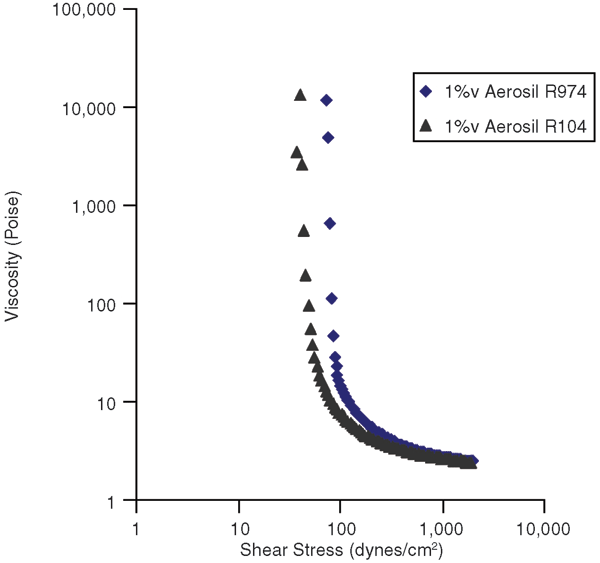 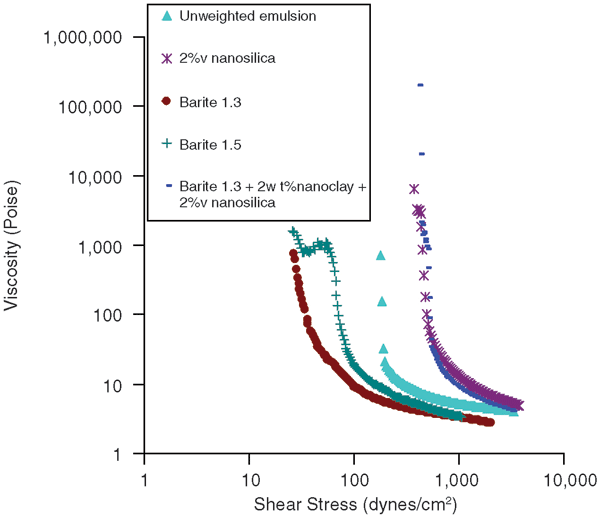 When barite was added to the emulsion, the yield stress decreased significantly while the plastic viscosity remained essentially the same. This could be related to the fact that the gel structure formed by nanoclay and nanosilica was disrupted by large-sized microparticles of barite. To see whether the gel structure could be attained again, the nanosilica content was increased to 2 percent by volume. As can be seen in Figure 4, yield stress increased as a result, indicating the gel structure had formed again. Therefore, even for weighted drilling fluids, properties can be changed by adjusting nanoparticle concentration.

The main objective of this work is to replace polymeric surfactants with nanoparticles that are more stable at high temperatures. Static aging of these model drilling fluid emulsions was carried out in a Fann aging cell to determine whether nanoparticles could maintain effectiveness in preserving rheological properties of invert emulsions. Fresh emulsion (water, Cloisite 20A and Aerosil R104) was loaded into the aging cell and pressurized to 500 psi at room temperature, and then was placed in the oven at 225 degrees C for 96 hours.

Figure 5 shows the rheology curve for the aged drilling fluid compared with the fresh drilling fluid. The decreased yield stress value after aging indicates a loss of gel structure. To determine whether any changes in the morphology also occurred as a result of aging, emulsions were characterized by microscopy. The results showed that the water droplet size had increased with aging, possibly as a result of coalescence. However, if the aged drilling fluid was again homogenized by high-speed stirring, an emulsion with fine droplets was obtained. This also results in an increase in yield stress values. 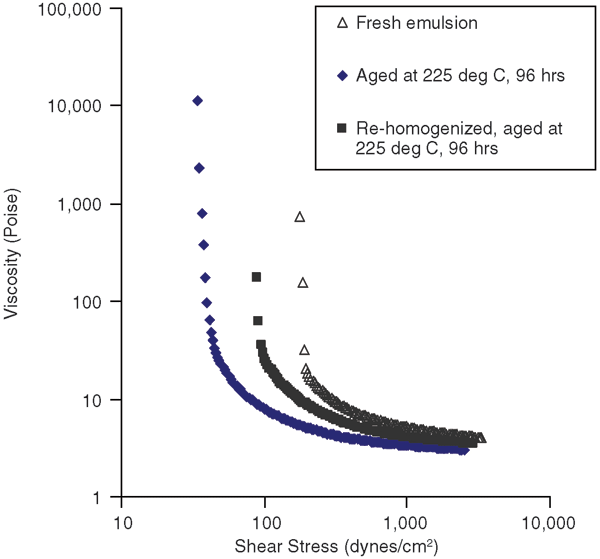 It should be noted that when emulsion stabilized by a polymer surfactant was aged, it degraded severely, and oil and water phases separated and could not be emulsified again. Therefore, it was concluded that nanoparticles are quite effective in maintaining emulsion stability when exposed to high temperatures.

The results of this research show that stable invert emulsions can be obtained using organically-modified nanoclay and hydrophobic nanosilica, and the best stability and flow properties were obtained when both nanoclay and nanosilica were used together. Nanoclay that disperses easily in oil phase showed better gel formation capacity, but the relative hydrophilic and hydrophobic nature of nanosilica also had a significant effect on gel forming behavior.
It also was demonstrated that although adding barite decreased yield stress values, they could be regained by increasing nanosilica content. Similarly, although aging at high temperature resulted in some loss in yield stress, the emulsion remained stable, and re-homogenizing the emulsion recovered the yield stress.

DONALD MARTELLO is director of the National Energy Technology Laboratory’s Environmental Sciences division in Pittsburgh. He holds a B.S. and an M.S. in material science and engineering from the University of Pittsburgh.