U.S. natural gas production should hit an all-time high above 100 billion cubic feet a day by the end of 2022, Rystad Energy projects. According to the firm, this would solidify the country’s position as the world’s most prolific natural gas producer.

Some of the growth will come from associated gas in plays such as the Permian. Of the shale gas plays, the Marcellus, Utica and Haynesville will contribute the most, though Appalachia’s growth depends on the Mountain Valley Pipeline overcoming legal hurdles.

“Production from the Haynesville alone is expected to grow by a staggering 2.6 Bcf/d this year, pushing annual output from the play to more than 14 Bcf/d. Total production from the basin is forecast to jump next year too, reaching 17.2 Bcf/d by the end of 2023,” Rystad details. Figure 1 illustrates this growth.

“Elsewhere in the United States, gas production from the Woodford basin could contribute major growth to total output in 2023, with a 1 Bcfd expansion not off the table,” the analysis adds.

Surging global gas prices are prompting producers to invest in production growth, Rystad explains. “A well-documented European supply shortage amid efforts to ease reliance on Russian gas is pushing prices on the continent ever higher,” the analysis observes. “Although relatively elevated for the domestic market, U.S. and European price differences are so wide producing and shipping U.S. gas across the Atlantic, even accounting for the pricey liquefaction process, is still economically advantageous.” 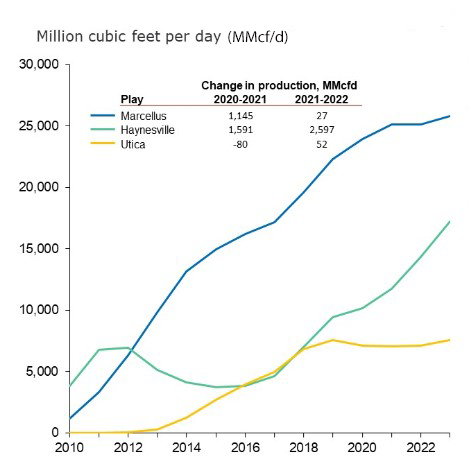 The price spread “has widened steadily since summer 2020, when unusual market fundamentals brought the Henry Hub–the U.S. benchmark–and the Dutch TTF–the European marker–unusually close,” Rystad relates. “Russia’s invasion of Ukraine and the ensuing global energy crisis has accelerated the disparity. As of July 15, the Henry Hub was $7 per MMBtu, whereas the TTF stood at a staggering $47 per MMBtu, almost seven times the U.S. price.”

“Already the top gas producer in the world, the United States stands ready to boost output further to meet the global demand, but takeaway constraints are a serious risk,” assesses Rystad Energy Senior Analyst Kristine Vassbotn. “However, with new LNG capacity expected to be added after 2024, the United States is set to grow its role in global gas markets for some time to come.”

To illustrate major U.S. gas plays’ global significance, Rystad compares the Marcellus, Utica and Haynesville with countries. “If it was a stand-alone country, the Appalachian Basin would be the third largest gas producer globally, with 34 Bcf/d, behind only the United States–including Appalachia–and Russia,” it begins. “The Haynesville is expected to produce about 18 Bcf/d, surpassing the total from major gas player Qatar and closing in on China and Canada” (Figure 2).

Within the United States, the Marcellus is the top gas producer. However, limited takeaway capacity is flattening the play’s output, Rystad says, noting this may allow the Haynesville to catch up. The analysis predicts the gap between the two plays’ production, which was 13.8 Bcf/d in 2020, will narrow to 8.6 Bcf/d next year. 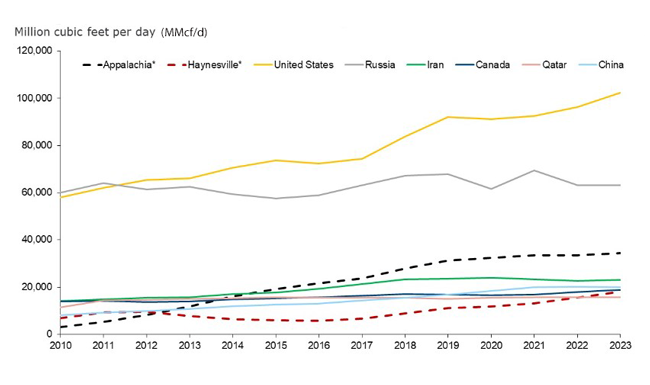 “Since 2020, investments in the Marcellus have remained relatively flat due to ongoing takeaway constraints and the maintenance mode initiated by the public-heavy group of operators in the region,” Rystad relates. “Investments in the Haynesville are set to exceed the Marcellus this year for the first time since 2009, at around $7.4 billion.”

Nevertheless, investment is rising in both Appalachia and the Haynesville. “Haynesville investments will grow 47% from 2021 to 2022, followed by the Utica and Marcellus at 26% and 21%, respectively,” Rystad calculates. “The increase in investments in 2022 is a combination of increased activity in response to prices, particularly in the Haynesville, and the rise in well costs on account of inflation so far this year.

“Looking ahead, it appears these basins have a lot more gas to give,” the analysis assures. “The Marcellus has the largest undrilled leased acreage of the three at 6.7 million acres. As policymakers seek ways to boost domestic output, the Marcellus has plenty of remaining commercial acreage and inventory to unlock should takeaway constraints eventually ease.”

Oil exports from the U.S. Gulf Coast are poised to reach a record of 3.3 million barrels a day in the second quarter of 2022, Rystad suggests in a separate announcement.

The firm attributes export growth partly to releases from the Strategic Petroleum Reserve. “The government’s unprecedented support for the domestic crude system has accelerated U.S. supply, with levels expected to hit 13 million bbl/d this summer for the first time since November 2019,” Rystad says. “But the unintended consequence of federal intervention is that more barrels than ever before are being sold to international buyers.”

More than 95% of all U.S. crude exports transit through the Texas ports of Corpus Christi, Houston, Beaumont and Port Arthur, as well as Louisiana, Rystad says. It forecasts that Gulf Coast exports will top 3.3 MMbbl/d in the second quarter, exceeding the previous record of 3.2 MMbbl/d in the first quarter 2020, before the Covid-19 pandemic took its toll on global markets.

“Domestic refining capacity in the U.S. remains depressed compared to pre-Covid levels, so it’s no surprise that government intervention to support crude supplies has resulted in an increase in exports of domestically produced light barrels. It means the United States is able to support global markets amid the most challenging energy crisis in at least 30 years,” comments Artem Abramov, Rystad’s head of shale research.

“The future looks bright for Gulf Coast exports, with volumes transiting through the hubs of Corpus Christi, Houston and Beaumont, Port Arthur and Louisiana expected to accelerate in the coming years. Under Rystad Energy’s base case scenario, crude exports will approach 4 MMbbl/d in the first three months of 2023 and break the 4 MMbbl/d barrier by the second quarter of 2023, thanks to strong SPR draws and a rosy domestic supply outlook,” the firm projects (Figure 3). 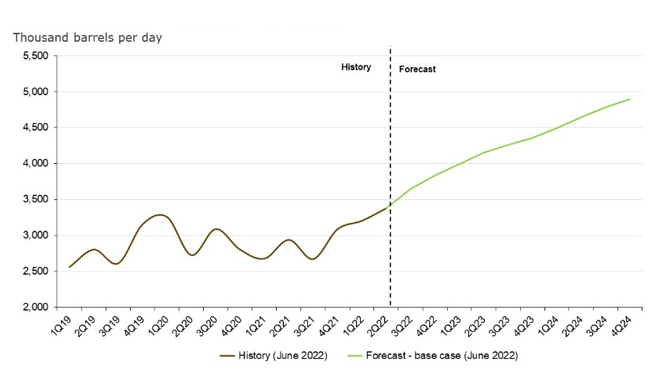 This growth could be tempered by upstream and midstream bottlenecks, including the prevalent new public exploration and production business model, supply chain constraints and schedules for gas takeaway capacity expansion in the Permian Basin, Rystad says.

“Soaring exports could be deemed unrealistic, as there is little that the nationwide U.S. supply chain can do to resolve existing labor and capacity challenges faster. However, should supply chain challenges alleviate even somewhat in the first half of 2023, exports could rise beyond current forecasts,” Rystad concludes.