One producing region with fast-growing natural gas production and the potential for significant increases in liquids volumes is the Marcellus Shale. Considered the largest shale formation in the world, the Marcellus is one of North America’s greatest natural gas resources, with vast reserves, low per-unit development and production costs, and close proximity to premium East Coast markets. After Range Resources Corporation established economic production from early Marcellus wells in 2005, development activity and production have expanded rapidly. Based on rig counts and pipeline flows, total Marcellus production conservatively is projected to reach 5 billion cubic feet a day by the end of 2014, and some forecasts anticipate as much as 10 Bcf/d. 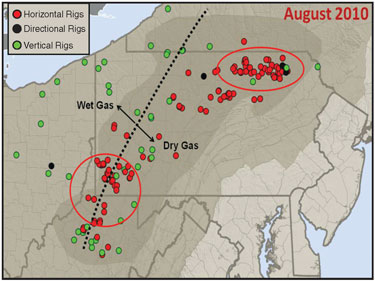 As shown in Figure 1, Marcellus drilling activity is concentrated in the areas with the two red ovals in southwestern and northeastern Pennsylvania. Gas produced west of the dotted line tends to be wet (high Btu), while most of the gas to the east of the line is dry (low Btu). High-Btu gas with strong liquids yields is generally good news. NGLs are priced significantly higher than natural gas on a Btu equivalent basis, improving the producer’s profitability at the wellhead. But that assumes infrastructure exists to extract, fractionate and transport the NGLs. If the Btu content of the produced gas is higher than pipeline specifications, the producer can be left with the unattractive prospect of shutting in wells because of downstream infrastructure constraints.

Insufficient processing, fractionation and transportation capacities pose a major midstream obstacle to production growth in high-Btu areas of the Marcellus play. Fortunately, several midstream developers (including Dominion, Caimen, Keystone Midstream, Markwest Liberty Midstream and Exterran Holdings) are responding with significant investments in gathering, processing and fractionation facilities. These announced infrastructure projects are expected to add more than 1.2 Bcf/d of new processing and fractionation capacity by the end of 2012.

In turn, however, new infrastructure also will substantially increase Marcellus NGL output. Some NGL component products have ready markets in the Northeast. Propane separated from the NGL stream can help meet regional home heating demand, while butanes and natural gasoline can be delivered to East Coast refineries by truck or rail, with local storage balancing seasonal variations in demand. The more difficult issue is ethane.

Although ethane generally is worth much more than an equivalent volume of natural gas, Marcellus ethane has one obvious problem: It is not located where the demand is. There are essentially no regional ethane markets in the Northeast, and the infrastructure does not yet exist to move ethane to markets outside the region. Today, nearly all Marcellus ethane remains in the natural gas residue stream, or is blended with leaner, low-Btu gas to meet pipeline specifications. But this blend-off alternative is becoming increasingly less feasible (ultimately unviable) as Marcellus ethane production ramps up.

The ability to cost-effectively transport ethane from the liquids-rich Marcellus to petrochemical demand centers could make ethane a valuable commodity for producers, if accomplished on a cost-effective basis. Several projects have been proposed to resolve the ethane issue, but there is no simple answer and each project requires substantial expenditures and includes several market risks.

The magnitude of the ethane issue is illustrated by the production data in Figure 2, which shows the recoverable liquids content in three gas samples representing some of the newer Marcellus wells. Total liquids content in the first sample is about 7.0 gallons per Mcf of gas, while the second and third samples are in the 5.0 gal/Mcf range. Some regions are leaner, such as Butler County in extreme southwest Pennsylvania (3.5-4.0 gal/Mcf), and some are richer, such as northern West Virginia (close to 9.0 gal/Mcf). 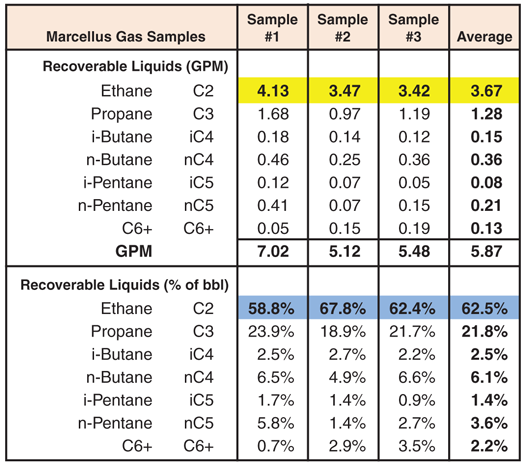 The blue bar in Figure 2 highlights the percentage of ethane in the recoverable liquids. In most liquids-rich U.S. reservoirs, ethane averages 45 percent of the NGL barrel. In these Marcellus samples, ethane averages 62.5 percent of the NGL barrel. It reasonably can be assumed that a likely expected ethane percentage for Marcellus wet gas is on the order of 55-65 percent. Such high NGL levels have implications for Marcellus producers in terms of the technology needed to process gas, the downstream infrastructure to handle the liquids, and transportation options to move liquids to market.

High-Btu Marcellus gas must be processed in plants with the capability to yield pipeline-specification gas (1,100 Btu). Older, less efficient refrigeration plants generally are unable to meet this requirement. They can extract most natural gasoline and butanes, but typically only 40-70 percent of the propane and 10 percent of the ethane. When processing raw gas in the 5.0-7.0 gal/Mcf range, few refrigeration plants are able to extract enough liquids to meet a 1,100-Btu residue specification at the tailgate.

Consequently, high-Btu Marcellus gas must be processed in high-efficiency cryogenic plants, which can extract almost all natural gasoline, butanes and propane, and up to 85 percent or more of the ethane. A typical cryogenic plant processing Marcellus high-Btu gas can meet the 1,100-Btu specification by extracting only 26 percent of the ethane. The amount of ethane that has to be extracted to meet pipeline specifications can be termed “must recover,” while the remaining ethane is dubbed “discretionary recovery.”

If, as expected, total Marcellus production increases to 5.0 Bcf/d by 2014 and one-fourth of that volume is high-Btu gas averaging 6.0 gal/Mcf, must-recover ethane would be 40,000 bbl/d and discretionary ethane would be a little more than 80,000 bbl/d.

The alternatives for handling ethane from the Marcellus Shale are different for must-recover versus discretionary recovery volumes. Discretionary recovery ethane can either be left in the gas or transported to petrochemical markets. It only makes sense to extract and ship this volume of ethane if the net back after fractionation and transportation is greater than the regional gas price. Otherwise, discretionary ethane should be left in the stream and sold into Northeast gas markets.

In contrast, must-recover ethane has to be extracted and either transported to a petrochemical market hundreds of miles away, or if feasible, blended with lean gas to meet local pipeline specifications. The best economic disposition for must-recover ethane is the higher of the net back (the ethane price at the destination minus the transportation cost) or blending and selling as natural gas (the gas price minus the costs of blending and transporting).

If additional blending capacity is required, phase two of Williams’ solution would be to ship a high-Btu mixture on the proposed Keystone Connector pipeline to its Transco interstate pipeline, where the gas would be blended before entering the system. Economically, large-scale blending restricts the return on Marcellus NGLs to the prevailing natural gas price. However, because the cost of blending is expected to be well below the price of proposed pipeline or marine shipment alternatives, it could play a critical role over the short and intermediate terms. 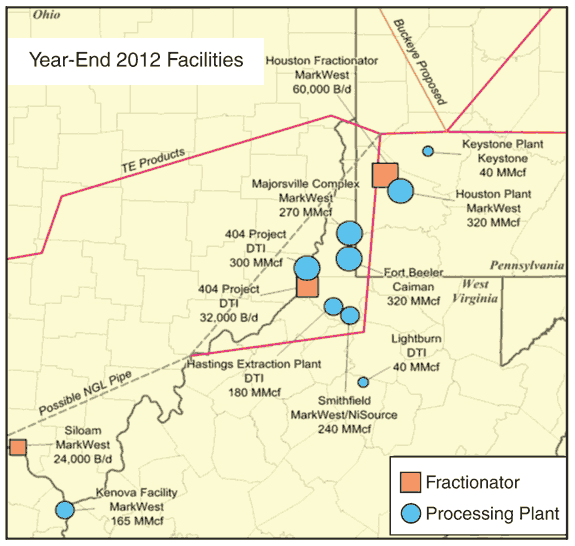 There are currently three large processing plants in the Marcellus region with a combined capacity of 500 MMcf/d–MarkWest’s Houston complex in southwest Pennsylvania and Kenova facility in Wayne County, W.V., and Dominion’s Hastings plant in Wetzel County, W.V.–as well as another 17 small plants, the majority of which are refrigeration facilities. As shown in Figure 3, major processing capacity additions are under development. All of the planned new plants are turbo expander facilities.

If all announced processing projects are built, there will be nine large processing plants in the Marcellus by the end of 2012 with 1,875 MMcf/d of total capacity. New and expanded fractionation facilities could increase daily capacity from 29,000 to 116,000 barrels of ethane. Even with some inevitable project cancellations, enough processing and fractionation capacity should be added to handle increased Marcellus production.

Ethane demand is highly dependent on the North American petrochemical industry, which consumes virtually all of the ethane produced in the United States. With attractive NGL pricing relative to naphtha refinery streams, the feedstock percentage of NGLs has been increasing, with ethane taking a disproportionate share of the total. Most U.S. ethylene crackers are running at maximum ethane volumes. Today, the domestic ethylene industry can process 950,000 bbl/d of ethane, with almost all of that feedstock volume coming from gas processing plants (Figure 4). 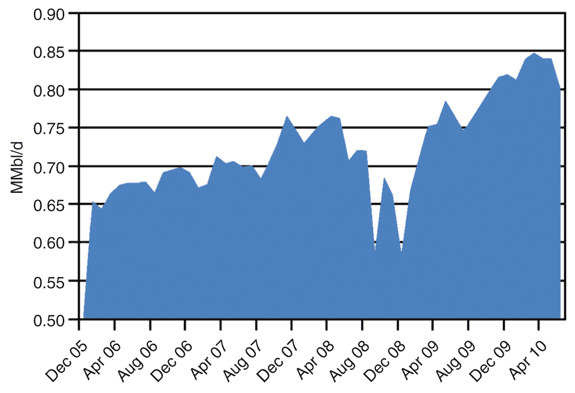 Other proposed projects are “still on the table.” For example, Enterprise Products Co. has proposed transporting 75,000-125,000 bbl/d of Marcellus ethane to the Mt. Belvieu, Tx., NGL trading and fractionation hub by reversing a portion of the TEPP­CO pipeline system that now moves propane and NGLs from the Gulf Coast to the Northeast. The project includes building a 10- or 12-inch pipeline that would originate in Weirton, W.V., and run 600 miles along existing TEPPCO rights-of-way to an interconnect in Illinois. The transportation cost is expected to be $0.15-$0.16/gallon, which would be in the middle range of other projects.

The goal of all these projects is to move ethane, a full NGL stream (Y-grade), or some other mix of ethane and heavier NGL products to downstream markets. The NGL/ethane pipeline and marine projects ship Marcellus ethane to petrochemical markets outside the eastern United States, while blending keeps the Btus within the regional gas market.

The viability of each proposed transportation/blending project depends primarily on three factors: the differential (spread) between the local natural gas price and the ethane price at the destination market, the volume and composition of the NGLs transported (ethane, Y-grade or other composition), and project costs (including which parties bear the risk of scheduling delays and cost overruns). In addition, blending alternatives have to consider the local availability of low-Btu natural gas blend stock.

The Marcellus ethane issue is complex and multifaceted. The viability of each Marcellus project is highly influenced by the specific design volume and assumed composition of products. Each proposed ethane project has advantages and disadvantages, as well as different risk and economic profiles under various frac spreads, production and demand scenarios, and numerous other variables.

While no one proposed project dominates the field at the moment, infrastructure certainly will get built to help producers find a home for the growing volumes of ethane being produced from the Marcellus Shale. The challenge for Marcellus producers is to select projects that are large enough to handle all of the must-recover ethane, without costly overbuilds that would be detrimental to both shippers and project backers.

Editor’s Note: Some concepts in the preceding article are based, in part, on presentations by The Williams Companies.

E. Russell “Rusty” Braziel is vice president of sales and marketing at Bentek Energy, a Platts company. He was previously vice president of energy marketing and trading for Texaco (now Chevron) and vice president of business development for Williams. Braziel founded and served as president and chief executive officer of Altra Energy Technologies, a developer of energy transaction management software and electronic trading systems. He is a director on the North American Energy Standards Board. Braziel holds a B.B.A. and an M.B.A. in business and finance from Stephen F. Austin University.