EVERGREEN, CO.–The Marcellus and Utica shale plays in the U.S. Northeast are causing quite a buzz across the energy sector, with one of the most dramatic growth curves in North America. Like other high-Btu plays across the country, attractive returns in the wet portion of the Marcellus have spurred aggressive drilling activity. However, gas production has been limited by changes in historical flow and pricing patterns, as well as the region’s ability to handle the associated natural gas liquids.

In addition, there are constraints on Northeast regional processing, fractionation and ethane take-away capacity. However, once these constraints are relieved, wet gas production from the region is forecast to double by 2017 to 4.6 billion cubic feet a day.

Significant investment in midstream infrastructure is under way to address these constraints, with more than 4.8 Bcf/d of gas processing capacity, 473,000 barrels a day in additional NGL fractionation capacity, and three pipeline projects planned to start by 2016. The completion of these projects will impact the U.S. NGL supply/demand balance significantly, particularly for ethane.

For ethane to be recovered in the Marcellus and Utica, demand from a new steam cracker will be required or the product will need to be transported out of the region to demand markets along the U.S. Gulf Coast or globally. Although this is a major issue in the region today, several solutions have been announced, which will allow for the full-scale startup of NGL production by mid-2016.

Projected increases in U.S. Northeast NGL production are primarily the result of expected developments in the Marcellus wet gas region through 2014. However, after 2015, BENTEK forecasts that the Utica could further increase the amount of liquids-rich gas produced in the region by roughly 30 percent and require additional solutions for handling NGLs.

The Marcellus and Utica shales are among the greatest energy resources in North America and sit next door to the largest natural gas markets in the country, including Philadelphia, New York City, Hartford, Boston and Washington (Figure 1). Proximity to these traditionally premium-priced Northeast markets, along with low per-unit development and production costs, make the Marcellus a strong competitor to other U.S. production basins as well as natural gas-exporting countries. 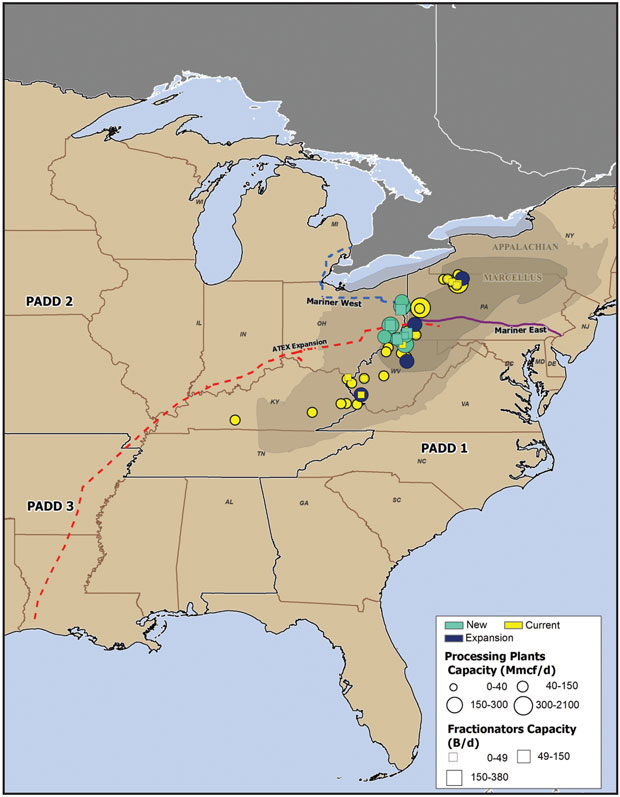 Chesapeake Energy Corp. is the largest player in the region, with more than twice as many rigs as the second most active operator, Range Resources. Equitable Resources, Talisman Energy and Shell (by virtue of its 2010 acquisition of East Resources) also have substantial acreage positions and are running large numbers of rigs in the region. 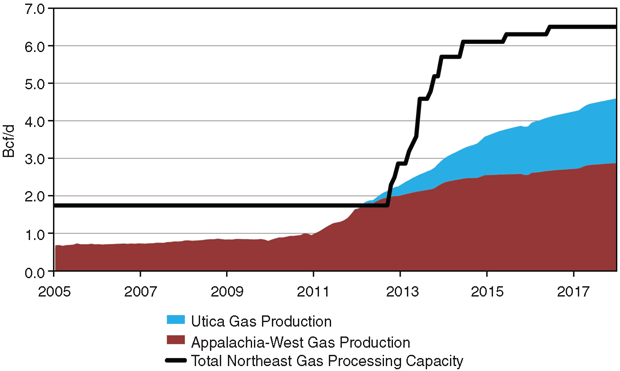 With NGLs valued at more than four times dry natural gas on a Btu basis, rich gas production creates significantly higher returns to producers versus dry gas. This has led Marcellus producers to begin to move more capital and rigs from the dry, northern regions of the Marcellus to the wet counties in West Virginia. Driven by higher returns in the wet gas region of the Marcellus Shale, production began ramping up in 2010 and surged to roughly 800 million cubic feet a day by December 2011, resulting in one of the most dramatic growth curves in North America.

However, to continue to obtain these higher returns, additional infrastructure to process, transport, and/or fractionate the liquids will be required to serve the U.S. Northeast region.

As shown in Figure 2, there is 1.7 Bcf/d of processing capacity in the region, and with 22 projects announced to increase processing capacity by 7.8 Bcf/d, infrastructure is growing rapidly. As shown in the chart, this will provide ample capacity in the region through 2017, based on our production projections. Marcellus wet gas production is forecast to increase by 80 percent over the next six years to roughly 2.9 Bcf/d. The Utica Shale is expected to produce as much as 1.7 Bcf/d of natural gas by December 2017. In total, we are forecasting roughly 4.6 Bcf/d in wet gas production from these shale regions.

The U.S. Northeast region has not been a large producer of raw-mix NGLs, producing only 40,000 bbl/d in 2011. However, over the next six years, NGL production is expected to increase dramatically because of the changing gas production outlook. Based on these projections, BENTEK expects NGL production to increase at an even more dramatic rate of 1,040 percent to roughly 480,000 bbl/d by the end of 2017 (Figure 3). 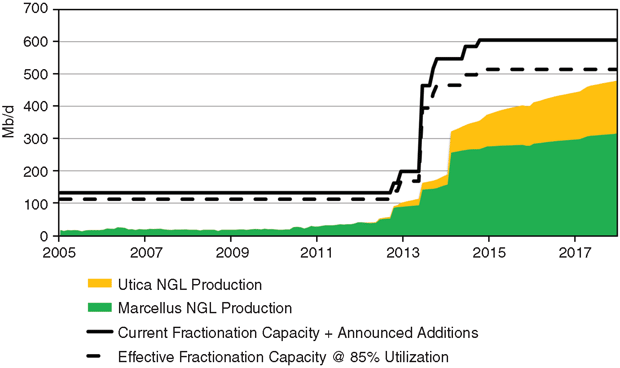 The first solution will be to export 50,000-65,000 bbl/d of ethane to petrochemical markets in Sarnia, Ontario, through MarkWest/Sunoco’s Mariner West pipeline project. MarkWest Liberty Midstream & Resources entered a joint venture with Sunoco Logistics Partners to convert 350 miles of a refined products line to transport purity ethane westward from MarkWest’s processing and fractionation facilities in Pennsylvania to Nova’s Corunna steam cracker in Sarnia. 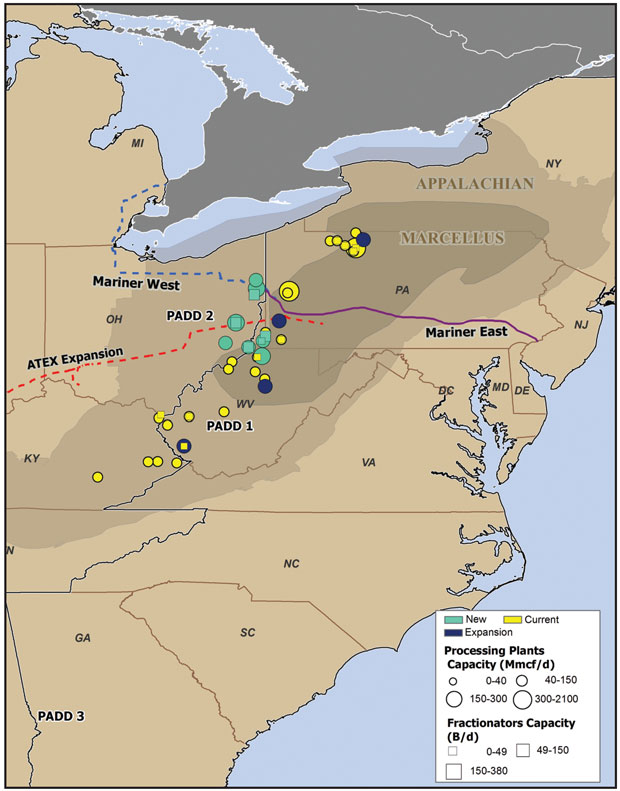 The pipeline will have an initial capacity of 50,000 bbl/d, but will be expandable to 65,000 bbl/d as demand increases for additional ethane in the northern tier markets. As of October 2011, Sunoco Logistics had received sufficient binding commitments for Mariner West during its open season to allow the project to continue. The project is expected to be operational by mid-2013.

MarkWest and Sunoco also are proposing a Mariner East project, which would have capacity to transport about 70,000 bbl/d of ethane and propane from the Northeast region to Sunoco’s export terminal at its Marcus Hook refinery on the Delaware River in Southeast Pennsylvania, where the products could then be exported to U.S. Gulf Coast and global markets. The project includes a 45-mile pipeline to deliver ethane from MarkWest’s Houston, Pa,, fractionator to an interconnect with an existing Sunoco line at Delmont, Pa., to move purity products to new refrigerated storage facilities at Sunoco’s Delaware River refinery and marine port at its Marcus Hook Refinery, where it will be loaded onto vessels.

Although the project is not officially expected to enter service until 2014 for propane and 2015 for ethane, MarkWest already is testing the feasibility of the Mariner East project, and started exporting propane in June. Deliveries were made by truck from MarkWest’s Houston fractionator to Sunoco’s refinery and marine port, loaded onto vessels, and likely shipped to Central/South America.

ATEX will have the capacity to transport up to 190,000 bbl/d from the Northeast region to the partnership’s storage and distribution assets in Texas. The first leg of the system includes constructing 595 miles of new pipeline extending to Cape Girardeau, Mo. At Cape Girardeau, Enterprise will reverse a 16-inch diameter pipeline and place it into ethane service. ATEX is expected to begin commercial operations in the first quarter of 2014.

Despite having enough commitments to break ground on its ATEX pipeline project, Enterprise announced another open season. So far, the 2014 project has generated interest primarily from producers with long-term investments and large rig fleets in the liquids-rich side of the Marcellus. Two of the producers also hold prospective Utica acreage, which is expected to add more ethane volumes during the next two years.

Creating demand in the area is another solution being considered, with two parties vying to be the first to get a steam cracker project under way. Aither Chemical and Bayer Corp. have proposed a 600 million pounds/year steam cracker, which would be located just outside of Charleston, W.V., on land owned by Bayer. The steam cracker could consume 17,000 bbl/d, if running at 100 percent capacity. Aither’s facility also would have a 300 million pounds/year acetic acid unit, which would consume some ethane supplies. Aither Chemical has held an open season, to which it received a positive response.

Shell Chemical also is proposing a world-scale steam cracker in the Northeast region, which could consume as much as 90,000 bbl/d of ethane. In March 2012, Shell signed a land option agreement for a potential ethane steam cracker near Monaca, Pa., on the banks of the Ohio River, which would be convenient for product transportation. The site is also on the path of Mariner West pipeline, which could be a source of ethane feedstock.

Overall, we expect natural gas and NGL infrastructure constraints to be relieved by a rush of capital investments over the next several years, although the region could still be at risk. If all these ethane projects do not move forward or if ethane supplies exceed local demand and take-away capacity, gas pipelines in the region could be pushed to maximum Btu limits with ethane rejection, and marginal natural gas production likely will be stalled.

Additionally, value could be lost from natural gas, NGLs and oil volumes not sold because of reduced well production rates. Range Resources mentioned in a presentation at a conference in early September that it could grow its wet Marcellus production to 1.3 Bcf/d with its current ethane take-away options, but that level of growth would entail only minimum ethane extraction to meet pipeline specifications.

Many other producers in the wet Marcellus play certainly are considering ethane rejection as the means of keeping their liquids-rich wells flowing, which should test the gas quality limits on interstate pipelines in the Marcellus. When the maximum Btu limits on the pipelines are reached, ethane recovery will be necessary to keep production from new wells flowing. This potential for lost production sales–particularly for higher-value liquids–could add additional value to producers holding ethane take-away capacity on these projects, as well as provide the incentive for additional capital investments.

JENNIFER BRICKLE is a senior NGL analyst with BENTEK’s consulting group. In this role, she manages consulting projects that are focused on natural gas liquids and midstream asset evaluation. Prior to joining the consulting team, Brickle assisted in writing BENTEK’s “Great NGL Surge” market report, as well as aiding in developing several products such as the U.S. Facilities Databank as well as the NGL Supply Databank. Brickle combines her experience with BENTEK’s energy analytics team with four and a half years of experience in natural gas trading and settlements with Macquarie Energy. She holds a B.A. in corporate communication from the College of Charleston. 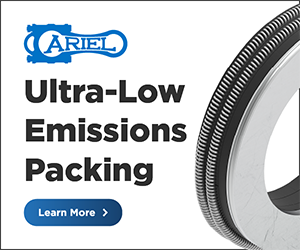