Named after the town of Haynesville in Claiborne Parish, La., the Haynesville Shale gas play was discovered in plain sight in 2008, and after an initial flurry, drilling and completion activity ebbed and flowed with natural gas prices. It is a different breed of shale play: deeper, higher-pressured, and with complex geology that yields dry gas. It is also different because during the past decade the Haynesville has become largely a domain of smaller independents, including private players backed by private equity capital.

Collectively, these companies have quietly helped the Haynesville Shale come of age, defining the play’s boundaries and extending development westward into Texas, proving up its massive resource potential, and demonstrating its world-class economic viability. Going forward, the Haynesville’s strategic location and ready connectivity to deliver low-cost supply to market centers—coupled with a tightening U.S. natural gas supply picture—puts operators in the northern Louisiana-East Texas play in the dry gas driver’s seat as demand picks up and prices strengthen.

The Haynesville rig count exited February at 46, three rigs higher than it had been at the end of February 2020 before the pandemic brought the market crashing down. It was the only major shale basin to average higher year-over-year rig counts through January and February. Operators indicate they plan more of the same for the rest of 2021.

The Haynesville’s proximity to liquified natural gas export terminals and industrial customers on the U.S. Gulf Coast, as well as easy access to pipelines exporting into Mexico, contributes to low gathering and transportation costs. These factors create some of the best cash operating margins in the country for Houston-based Rockcliff Energy and other Haynesville gas producers in the current price environment, according to Boyd Heath, Rockcliff’s cofounder and chief financial officer.

Moreover, the quality of the rock across the core of the Haynesville competes well economically with any gas-bearing reservoirs in North America, he insists.

“With our acreage and results, we can drill wells with a 20% rate of return at roughly a $1.80 flat natural gas prices unhedged,” Heath says. “When you combine the geological strengths of the Haynesville and the economic benefits of our proximity to markets, it just lends to continued resilience in the Haynesville that will benefit our nation’s supply needs for years to come.”

Rockcliff consistently keeps four rigs and two frac crews busy exploiting 156,000 net acres in Harrison and Panola counties, Tx., where the company has 1,000 future well sites that will keep Rockcliff busy in the area for a long time, he details.

The company’s consistent approach to growth through the drill bit began when Rockcliff established its Haynesville position from two acquisitions in 2017, Heath explains. The company’s work since then effectively has expanded the Haynesville core into East Texas, where the play is about 10,500 feet down and averages about 300 feet thick compared with about 170 feet in northern Louisiana, where the rock is typically more fractured and wells may have higher IPs, but higher decline rates as well, he says.

“Some people artificially drew a boundary around the core being in Louisiana, but we have clearly delineated and proven that the core extends well across our acreage in Texas, and one of the key differentiators is the greater thickness of the play in East Texas,” he says.

Rockcliff drills three-four wells per pad and staggers the wells in a wine rack configuration, with some wells landed in the upper Haynesville and others in the lower portion of the play, Heath says. “While each wellbore is 800 feet apart, it is the equivalent of 1,600-foot spacing within each landing zone, and we can get more gas out of each unit,” he explains. 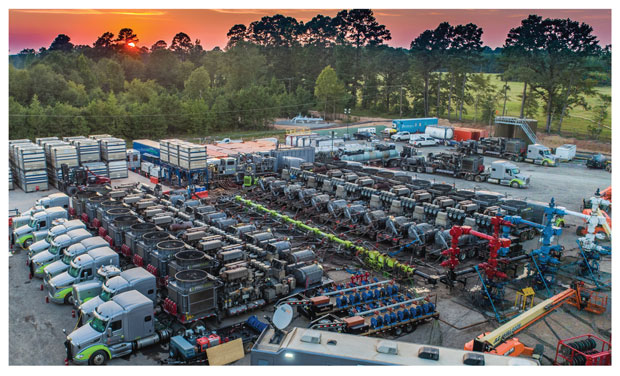 Since establishing its 156,000-net acre Haynesville position, Rockcliff Energy has extended the Haynesville core across the state line into East Texas. With a strategy of consistently growing through the drill bit and 1,000 future locations identified, Rockliff’s drilling and completion program is keeping four rigs and two frac crews hopping.

Rockcliff does not have a big drilled but uncompleted inventory of wells as frac crews typically begin completing wells as soon as drilling is finished, he says. Maintaining a balance between maximum recovery with a competitive cost structure, Rockcliff usually pumps ±3,500 pounds of proppant with 85-100 barrels of fluid per lateral foot, and also has benefitted from using diverting agents to treat more rock volume along the lateral, Heath adds.

The average lateral is a little longer than 9,000 feet, but the company has extended several beyond 12,000 feet. As a private company, Rockcliff focuses on overall well economics, long-term wellbore integrity and estimated ultimate recovery, and does not divulge initial production rates or its reserve position, Heath says. Average well cost is about $1,000 per lateral foot, which includes facilities costs. The company’s net gas production was approaching 1.0 billion cubic feet a day in February.

Although most of the acreage in the region is spoken for, Rockcliff maintains an active land acquisition effort and periodically picks up additional Haynesville leases, Heath adds. The company also holds rights to the Bossier Shale but currently focuses exclusively on the Haynesville.

“Like everybody, we are always on the lookout for consolidation opportunities,” Heath says. “I think the basin needs to consolidate, and that will continue to happen over time, but our current plan is to continue to grow through the drill bit.”

Rockcliff, which maintains a field office in Longview, Tx., makes extensive use of SCADA technology on each well to provide real-time operational data, which allows the company to build sophisticated algorithms and artificial intelligence capabilities to enhance production and optimize well performance, Heath concludes.

“The Haynesville has become the key dry gas basin in meeting demand both domestically and internationally given its proximity to Gulf Coast demand centers and robust well economics,” he says. “Of the dry gas basins, we see the Haynesville right there at the top.”

Based in The Woodlands, Tx., GEP plans to add a third rig this year as it continues to drill longer laterals. In 2015, GEP acquired Encana’s Haynesville assets, including 112,000 net acres, and through organic leasing and bolt-on acquisitions, has boosted its position to 130,000 net acres in the core of the play in DeSoto, Red River and Sabine parishes in northern Louisiana, Hanks explains

The majority of the acreage is prospective of both the Haynesville and Middle Bossier, he says. The company plans to drill approximately 25 wells this year with a continued focus on drilling longer laterals to improve capital efficiency, Hanks details.

In 2020 in particular, GEP examined its analytics model to update optimum completion designs across its acreage, he says. Although designs can vary by area, GEP currently pumps about 3,000 pounds of sand and 100 barrels of fluid per lateral foot, Hanks says. Completion results have been exceptional.

“We are now holders of seven of the top 10 24-hour IPs in the Haynesville, and we have achieved 60 MMcf/d IPs on a couple of recent completions” Hanks says.

In 2020, GEP reduced drilling in response to lower prices and utilized DUC inventory as it invested instead in more short-cycle, high-return projects, he says. In early March, the company had a handful of wells that were awaiting fracs, but GEP has worked through much of its DUC inventory, Hanks says.

“There is always a certain amount of DUC inventory due to cycle times and pad drilling, but our frac spreads generally follow the rigs pretty closely,” he says.

This year, the company plans capital expenditures of about $250 million on operated and nonoperated activity, Hanks says. Well costs have ranged from $10.5 million to $12 million on wells with 9,500 foot laterals, he adds.

“We have seen very encouraging early results, so I would look for us to continue that practice going forward on some of the mature producers,” he concludes.

In 2021, additional efficiencies will allow Frisco, Tx.-based Comstock Resources, Inc. to drill as many wells as last year with fewer rigs while the company positions itself to ship more gas to Gulf Coast demand centers with more attractive pricing, says Ron Mills, vice president of finance and investor relations.

The company plans to spend $510 million-$550 million this calendar year to drill 62 operated wells and complete 58 on its 323,000-acre position in northern Louisiana and East Texas, where Comstock has some 2,000 net drilling locations, 73% of which can be drilled with average laterals exceeding 5,000 feet.

“In 2021, we are continuing to focus on generating free cash flow, and given improved drilling efficiencies, we can execute the same drilling program that was going to require 6.5 rigs on average a few months ago with 5.5 rigs this year,” Mills explains.

With the challenges of 2020 in the rearview mirror, efficiencies will allow Comstock to continue to extend lateral lengths and improve well economics, says Chief Operating Officer Daniel Harrison.

“We are really encouraged by what we have seen on the drilling side,” Harrison says. “It’s been pretty sustained and we see it getting better.”

On Feb. 5, Comstock turned the Jordan 16-9-4 No. 1 in DeSoto Parish to the sales line. The well had the longest lateral drilled to date in Comstock’s history–extending to 12,716 feet, he points out. It had an IP of 22 MMcf/d. Comstock was already topping that lateral length record a month later, however, as frac plugs were being drilled out on an almost 13,100-foot lateral in the first week of March, Harrison reveals.

“Where the acreage allows us, we are going to try to get some wells with laterals that are longer than that,” he says. “We feel pretty good about doing it. Our drilling efficiencies are good and improving, and we are confident we can drill them longer. That is definitely the plan going forward. As far as the economics, anytime you can get a well longer, the cost per foot comes down and the return and value go up.”

Although loading varies by drilling area, Comstock generally completes its wells with 3,500 pounds/lateral foot of sand loading and 70-90 barrels of fluid/lateral foot, he explains. The company typically has pumped more fluid in the Texas area of the play, as well as in portions of Caddo, DeSoto and Sabine parishes, Harrison adds.

In 2020, Comstock drilled 55 Haynesville and Bossier operated wells, with 54 completed with average IPs of 25 MMcf/d. And they did so at 16% lower well costs, averaging $1,026 per lateral foot on two-mile lateral wells compared with $1,215 a year before, according to company figures. Average 2020 laterals were approximately 9,000 feet.

Comstock also continues to improve drilling times, Harrison goes on, with drilling days on longer lateral wells now typically in the low-to-mid 20s. Lower drilling costs will help offset higher anticipated completion costs expected for the remainder of 2021 as prices improve and the service sector ramps up to meet additional demand from operators, he says.

The company expected to turn at least 10 operated wells to sales before the first quarter ends on March 31, he reports. In late 2020 and the first two months of 2021, Comstock completed 20 operated wells with average lateral lengths of 9,288 feet and average IPs of 24 MMcf/d.

In February, Comstock’s DUC inventory stood at 25 and is expected to range from 20 to 25 through the remainder of the year. Comstock also continues to actively lease properties, and plans to spend $7 million-$10 million on its leasing program this year.

The company is redirecting natural gas to supply high-growth Gulf Coast demand from industrial, refining and petrochemical markets and LNG exports, Mills says. Previously, Comstock entered into an agreement to be an anchor shipper on Enterprise Products Partners new 1 Bcf/d Haynesville Acadian Extension, which is expected to be in service in the fourth quarter.

In the meantime, a 250 MMcf/d lateral will be complete in the second quarter that will divert gas, including from Comstock’s core legacy property, the Logansport Field, from Perryville to Acadian for access to the Gulf Coast, Mills concludes. The installations also will provide additional access to Gillis, La., which could become ground zero as an LNG delivery point, he adds. 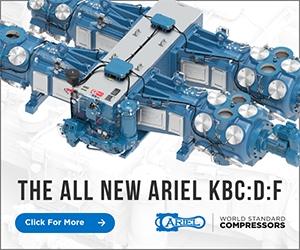