Horizontal wells in the area traditionally have required at least two BHAs: one to drill an 8¾-inch hole vertically from the 9⅝-inch surface casing to the kickoff point of the curve, and a second 8¾-inch BHA designed specifically to drill the curve and lateral sections.

Significant reductions in rig time and the amount of equipment used in “one-run” applications result in increased economic efficiency–specifically time and cost savings associated with eliminating a trip to pick up a second BHA–and create a simpler operation that provides a safer work environment for rig personnel.

After drilling successfully from surface casing to TD using a single BHA on a few initial wells, several problems were encountered, resulting in multiple unsuccessful one-run attempts. What began as a study to determine the best bit and BHA combination evolved into a multivariable study to identify the key factors for achieving successful one-run wells. The ultimate goals included increasing the likelihood of successful runs, and predicting when and where single-BHA runs should be attempted.

The method used in the Eagle Ford project should be considered seriously for any wells with geologic formations and temperature ranges that can tolerate the necessary variations in mud parameters throughout the vertical, curve and lateral sections. One-run wells can prove profitable by sacrificing single-section rates of penetration to gain overall well ROP.

For example, a slight reduction of the drilling parameters in the vertical section may reduce the vertical ROP, but will maintain the BHA integrity for the curve and lateral sections, which will result in an increased ROP over the length of the well.

Significant reductions in rig time and the amount of equipment used in one-run applications result in overall increased economic efficiency–specifically time and cost savings associated with eliminating a trip to pick up a second BHA–and create a simpler operation that provides a safer work environment for rig personnel.

The first one-run attempts were encouraged by third-party successes in other parts of the Eagle Ford play. Although the acreage owned by BHP Billiton was known to vary geologically from the areas in which the technique had been applied successfully, parallels in well design and basic geologic trends led to testing the idea.

The initial attempts were promising, which was attributed largely to motor and bit changes in the BHA. The time and money saved by eliminating a trip and additional BHA run led to applying the changes on other rigs. However, the results were not duplicated. Bits from unsuccessful attempts experienced noticeably different dull conditions than those observed on bits from successful one-run efforts.

Minor variations in motor and bit selection revealed useful insights. A fixed motor with a 2.0-degree bend drilled the vertical section efficiently and produced consistent results in building the curve. Motors with lesser bends (adjustable 1.83 or fixed 1.75 degrees) did not yield the required doglegs in the curve (motors with greater bends were not tested because of rpm limitations).

One-run bit testing involved variations of steel and matrix fixed-cutter PDC bits from multiple providers. In traditional two-BHA drilling operations, the bit of choice for the vertical section is a five-blade matrix option with a cone angle and dual-row, 16-millimeter cutters. The preferred design for the curve and lateral section is a six-blade steel body bit with 11-mm cutters and an extremely flat profile. Both of these bits were tried initially in one-run applications, but neither yielded successful results.

In selecting a new bit design, five- and six-blade options with 11-16 mm cutters and a variety of profile shapes were considered. The most successful designs showed no preference in body material, contained either five or six blades, had 13-16 mm cutters and had relatively flat profiles. Cutter and blade-count aggressiveness enable efficient drilling in the vertical and lateral sections, whereas a flatter profile theoretically helps maintain the tool face for directional drilling.

After bit options were narrowed, the exact preference was determined by directional drilling capability. Generally speaking, each one-run bit is considered to be more of a vertical or lateral bit that is directionally competent enough to drill the curve on a 2.0-degree motor.

Most one-run BHAs drilled the vertical and lateral sections faster than average, while drilling slower than average in the curve. These findings led to investigating drilling parameters for the Wilcox, and more specifically, the Lower Wilcox, which is composed of marine shale and fluvial/deltaic sands.

In two-run designs, the motors and bits used in vertical BHAs are aggressive enough to drill the coarse Wilcox, but do not necessarily contain the design elements necessary for building an efficient curve. On the other hand, the BHAs used in the curve and lateral sections are designed for precision, and would be more likely to sustain significant damage in an abrasive formation. 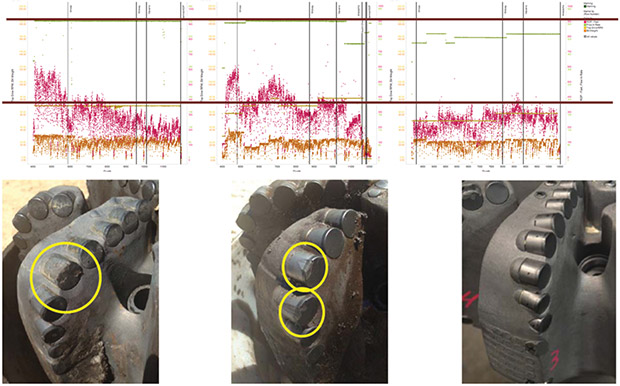 Optimizing a one-run BHA design (especially with respect to selecting a bit) involved determining a balance between necessary aggressiveness and the ability to adequately control drilling in the curve and lateral sections. The Wilcox presented an obvious challenge while drilling with a less aggressive BHA. The study determined that the most effectively drilled one-run wells compensated for the Wilcox by reducing mud flow rates to 450-550 gallons a minute and total rpm to 170-210 through the formation. This technique resulted in a visibly reduced ROP through the vertical section, although this was not significant compared with the time associated with a BHA trip.

The rigs that were unable to drill one-runs were not slowing down in the Wilcox, which resulted in bits with considerable shoulder wear and an inability to continue drilling effectively into the curve section. Because of the necessary balance in design elements for one-run bits, damage that would be considered normal wear and tear on a drill bit became a substantial factor for maintaining build rates and ROP in subsequent sections.

Bit damage was evident on one-run attempts that were unable to achieve build rates in the curve. The difference between the successful and unsuccessful runs is approximately 50 rpm down hole caused by higher flow rates and higher top-drive rpm. The one-run success rate increased by 21 percent immediately after implementing optimized vertical parameters (Figure 2).

However, despite the improvement through base-line vertical parameters, there was a large decrease in one-run success rates after the rigs moved to a different focus area within the operator’s Eagle Ford acreage. Even after altering parameters in the Wilcox, failed one-run attempts unexpectedly exhibited bit damage substantial enough to inhibit drilling the curve.

In the new focus area, the Wilcox proved to be thicker than expected and denser at its deepest point. This discovery added a new element to the Wilcox: It was not simply a matter of how to drill the formation, but also where to drill it. The success rate was nearly 50 percent in locations where Wilcox thickness was less than 4,000 feet, but declined to 17 percent where it was more than 4,000 feet thick.

This realization helped eliminate some wells from consideration for one-run attempts, improving the overall success rate (Figure 3). It also meant that successfully drilling through the Wilcox in the new focus area required an even greater reduction in parameters to preserve the bit for the curve, reducing both time savings and the probability of success by adding more exposure time to the BHA.

Another limiting factor for potential one-run wells is overall lateral length. Wells that are longer than average add an element of exposure time to downhole drilling conditions on the motor and measurement-while-drilling tools. Bottom-hole well temperatures can vary as much as 150 degrees from drill-out to TD. The longer tools are exposed to harsh drilling conditions, the more likely they are to fail, thereby negating almost all savings and gains by forcing a trip late in the lateral.

This finding encouraged the rigs to control ROP during the last part of the lateral to ensure that equipment would not fail. Because longer wells increased the probability of failure and losing rather than saving money, they were easily eliminated as potential one-run wells.

Several variables were analyzed, but proved somewhat benign on one-run success rates. These included formation dip in the lateral, updip versus downdip, and stabilized versus slick BHAs. Wells that were drilled in a northerly direction typically exhibited a 2.0- to 4.0-degree angle increase updip above a true lateral base line. The intuitive expectation was to observe more unsuccessful updip wells, but these wells actually accounted for 22-23 percent of both successful and unsuccessful one-run attempts.

Stabilizers also were anticipated to hinder drilling the curve while helping in the vertical and lateral sections. However, adding stabilizers to the BHA did not have a significant effect. Half of all one-runs attempted used a stabilizer and comprised 56 percent of successful attempts, which was a negligible difference on the outcome of one-run attempts.

The results of this study provided the tools to determine where and how to drill one-run Eagle Ford wells in Karnes and DeWitt counties. After isolating the areas in which one-runs should be attempted and following prescribed parameters, the one-run success rate more than tripled, saving a substantial amount of time and money across the drilling operation.

Running one BHA from surface casing to TD provides a low-risk, high-reward design option, since a failed one-run attempt requires a BHA trip at or near the kickoff point before drilling the curve and lateral, which is almost identical to a two-BHA design.

LUKE S. WALKER is a drilling engineer at BHP Billiton. With seven years of horizontal drilling experience in the Eagle Ford, Fayetteville, Marcellus, Brown Dense and other shale plays, he joined the company in 2013 after serving four years as a drilling optimization engineer at Southwestern Energy. Prior to joining the energy industry, he served in the U.S. Army as an aviation officer flying the UH-60 Blackhawk deployed to Operation Iraqi Freedom. He holds a B.S. in systems engineering from the U.S. Military Academy at West Point and an M.B.A. from the University of Arkansas at Fayetteville.

KATHRYN J. PATTON is a senior application engineer at Halliburton Drill Bits & Services (HDBS) in Houston, where her duties include application recommendations, post-well performance evaluations, drill bit/BHA simulation, optimization, and proposal development for the Permian Basin region. Previously, she served on behalf of HDBS as an in-house application engineer for South Texas at BHP Billiton. She began her career at Black Elk Energy LLC as a petroleum engineer responsible for operated and nonoperated Shelf properties in the Western Gulf of Mexico. Patton holds a B.S. in petroleum engineering from Marietta College.