Most horizontal wells completed with multistage fracturing in unconventional reservoirs experience 50-80 percent production declines within the first year, which is an order of magnitude faster than conventional vertical wells. At an 80 percent decline rate, a well that produces 450 barrels of oil a day initially would yield only about 90 bbl/d after one year.

The decline rate effect is amplified when horizontal wells are drilled on multiple-well pads. For instance, a four-well pad with per-well IPs of 450 bbl/d would decline from 1,800 bbl/d to 360 bbl/d in 12 months. To further put this into perspective, the entire pad would produce less than one well at IP.

In order to apply artificial lift cost effectively and to maximize estimated ultimate recoveries from horizontal wells, the artificial lift methods selected must be flexible to cover the significant and rapid changes in flow rate over a well’s life cycle. For this reason, different types of artificial lift often are implemented in the same well at different points in the production process. In fact, it is common for horizontal wells to use two or more forms of lift within only a few months of starting production.

In addition, with the majority of horizontal wells in resource plays producing both liquids and gas, the trajectory of the lateral and the completion design must be planned based on multiphase flow behavior. The multiphase hydrodynamics in horizontal wells change dramatically with variations in inclination, behaving very differently from vertical wells.

Slugging can be a major challenge to the performance of rod pump and electric submersible pump systems. The alternating arrival of a liquid slug and a gas pocket make separation difficult and cause significant gas entrainment, which can deteriorate pump performance. This problem is exacerbated in highly deviated and horizontal wells, where slug- and gas-pocket lengths tend to be much longer. In fact, in a near-horizontal gas/liquid pipe flow, slug length is about two times the slug length in a near-vertical pipe flow.

The asymmetric liquid film distribution is postulated to require a longer distance for the velocity profile to develop in the slug body. Corresponding to the same liquid flow rate and gas-to-oil ratio, the liquid film region also becomes longer and slug frequency becomes lower. Terrain slugging and flow instabilities may occur as a result of the significant gas volume and valley profile of the horizontal well at relatively low production rates.

Figure 1 shows typical multiphase flow behavior in an undulating horizontal well. In the downward flow sections, the gas/liquid flows are stratified normally. In the upward sections, at low- to medium-fluid velocities, slug flow is the common flow pattern because of liquid accumulation caused by gravity.

A unified model has been developed through a cooperative industry/academic research consortium at the University of Tulsa for three-phase (gas, oil and water) flow in wells, flowlines and pipelines. The model can be implemented in commercial simulators to calculate the multiphase flow hydrodynamic behavior in horizontal wells.

Figure 2A shows predicted pressure gradients versus casing diameter in upward and downward 10-degree sections of a horizontal well at 2,000 psia. The liquid production (Qo) is 2,000 bbl/d and GOR is 1,000. 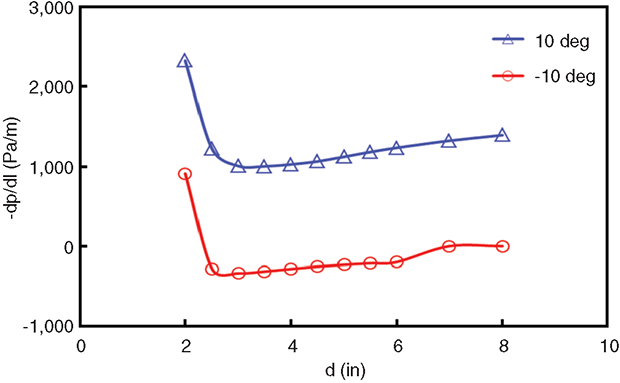 When the casing diameter is relatively large, there is a significant gravitational pressure drop in the upward section as a result of high liquid holdup. However, this gravitational pressure drop will not recover in the downward section, where the liquid holdup is very small. This is radically different from what happens in single-phase liquid flow.

Considering the multiphase flow behavior and pressure gradient difference in the upward and downward sections, a “toe-up” horizontal well profile (where the toe is higher than the heel) is preferred. The downward inclination of the lateral from the toe back toward the horizontal curve will allow liquids to drain to the heel section by gravity. The artificial lift apparatus can be installed in the vertical or deviated section above the heel section. 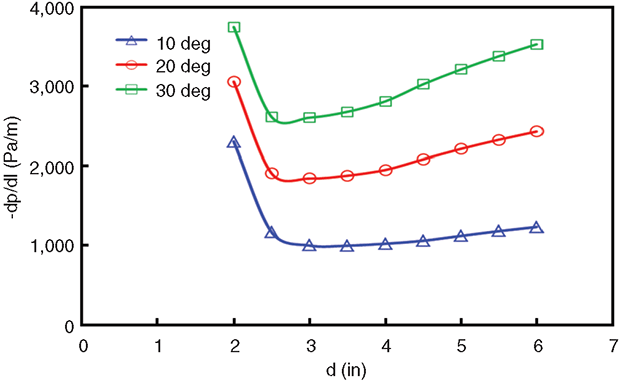 In cases where a horizontal well has to be drilled with undulations, careful selection of wellbore diameter is important to minimize pressure drops in the upward sections. As shown in Figure 2B, if the casing diameter is larger than the optimum value, the pressure gradient in the upward section will increase as the diameter increases. This is caused by greater liquid holdup. This effect is more prominent at higher inclinations angles. The optimum casing diameter depends on the liquid flow rate, GOR, and fluid properties. 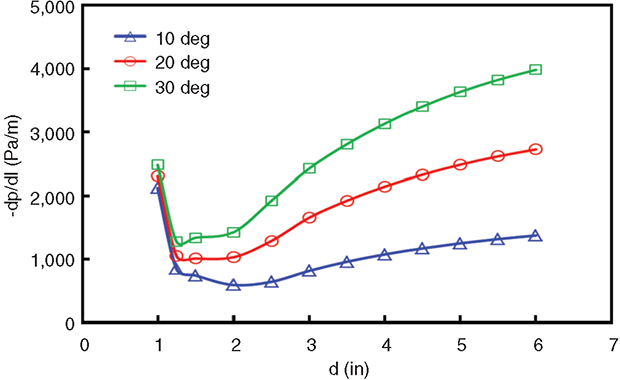 It is evident that at a lower gas flow rate (less than 4 MMcf/d), the pressure gradient in large-diameter casing is higher than in smaller-diameter casing. The casing diameter designed for the high initial production rate may soon become oversized because of the rapid decline. A smaller-diameter tubing may be used, which acts like a velocity string to increase the flow velocity to lift the liquids in the upward sections. Or, a bundle of small (e.g., 0.25-inch) diameter tubing may be inserted, which can reduce slippage dramatically between gas and liquid. 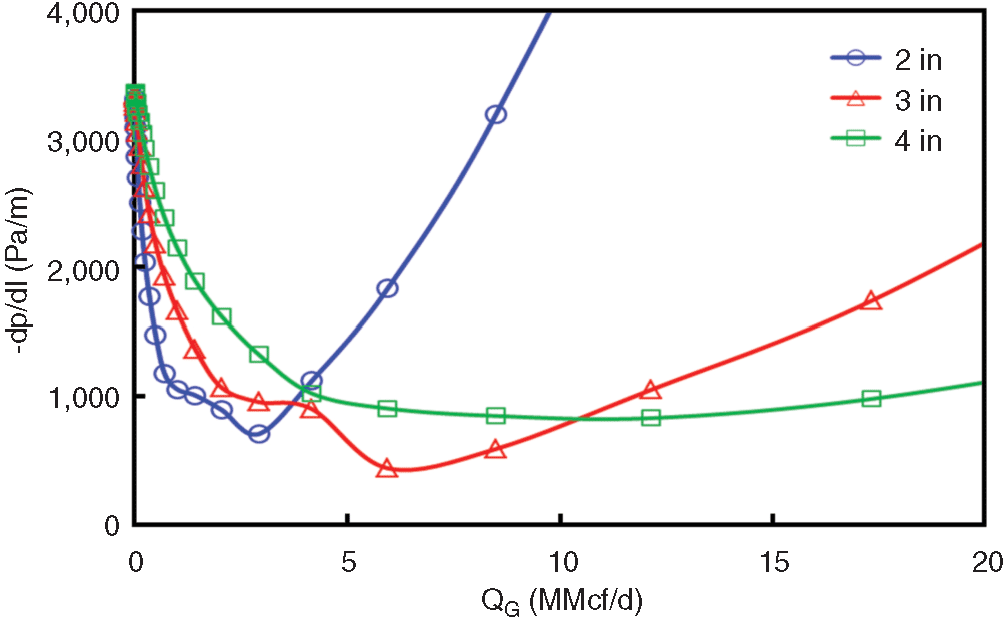 Because of the rapid production declines in horizontal wells, the artificial lift system selected must be flexible enough to operate over a wide range of production rates, or the system should be easily resized or replaced. Gas lift is preferred, especially in wells with relatively high GORs. Casinghead instability probably will be more severe with horizontal well gas lift because of the significant gas volume stored in the lateral section. The gas lift valve should be installed above the heel section.

There are proposals to inject gas in the highly deviated section, or even at the toe of the horizontal well, to sweep out the liquids. However, gas lift is effective only when the well deviation from vertical is not too high, since its working principle is gravity reduction. Injecting gas deep into the lateral section will increase the frictional pressure drop caused by high fluid velocity and increased tubing length. Intermittent gas injection in the lateral section to purge liquid also may result in flow back into the reservoir.

Installing a rod pump in the lateral section of a horizontal well is questionable, since the gravitational pressure drop in the lateral section is low and extending the tubing (which has a much smaller diameter than casing) will increase the frictional pressure drop considerably. If the surface condition allows, a better solution is to drill a bilateral (or multilateral) well with the vertical section located in the middle and the artificial lift apparatus located at the bottom of the vertical section.

Plunger lift is effective for liquid unloading above the highly deviated section in a horizontal gas well. Better modeling and simulation of the plunger lift operation cycle are needed to optimize frequency. On the other hand, the rapid production declines can make ESPs unsuitable for long-term horizontal well production, except for some highly productive offshore wells.

Gas interference is a challenge for artificial lift pumps in horizontal wells. Separators are needed to separate the gas from the liquids and to smooth the fluctuations caused by slugging. Gas separators designed for vertical flow may not perform adequately in horizontal wells because of more severe slugging and non-axi-symmetric distribution of the gas and liquid phases. Modifications or new designs are needed. Sumps may be drilled for gas separation and pump installations.

Monitoring is more important for production from a horizontal well because of its faster decline rate. Besides flow rate readings, measuring pressure along the lateral section can identify liquid loading and slugging issues, and artificial lift solutions can be optimized to increase productivity and recovery.

HONG-QUAN (HOLDEN) ZHANG is director of the University of Tulsa Artificial Lift Projects and an associate professor of petroleum engineering. From 1998 to 2012, Zhang was a senior research associate and associate director of the TU Fluid Flow Projects, and principal investigator of the TU High-Viscosity Oil Projects. In 1993 and 1994, as an Alexander von Humboldt research fellow, Zhang conducted research at the Max Planck Institute of Fluid Mechanics and the German Aerospace Research Establishment in Germany. Zhang’s research interests include multiphase flow in wells and pipelines, artificial lift, heat and mass transfer, heavy oil and emulsion rheology, oil and gas production, and flow assurance. He holds a B.S. and an M.S. in thermal energy engineering from Xian Jiaotong University, and a Ph.D. in fluid mechanics from Tianjin University. 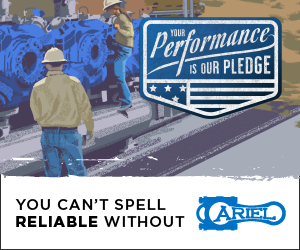