Don’t look for America’s drilling rigs to stop turning to the right anytime soon–especially those searching for crude oil.

For the sixth consecutive year, respondents to The American Oil & Gas Reporter’s annual Survey of Independent Operators have predicted a double digit year-on-year increase in their drilling activity, projecting they will drill 24.3 percent more wells this year than they did in 2007.

Operators who are primarily interested in finding oil (survey respondents who indicated they targeted crude oil with more than half of their 2007 wells) are the most upbeat, planning a nearly 33 percent increase in drilling. But gas-well drillers (those who targeted natural gas with more than half their 2007 wells) aren’t exactly despondent, forecasting their own 22 percent increase in 2008 drilling

The American Oil & Gas Reporter mails the Survey of Independent Operators annually in November to oil and gas producers nationwide, selected randomly from the magazine’s circulation list. No attempt is made to identify survey respondents, and The Reporter’sstaff compiles and analyzes the data. The Survey of Independent operators does not account for dry holes, and merely asks operators what the intended target is when a well is spudded.

The 2008 survey depicts an independent oil and gas industry realistic in its price expectations and seemingly confident that the infrastructure is in place to meet its goals. At a time when the light-sweet crude oil contract on the New York Mercantile Exchange was flirting with $100 a barrel and posted prices in much of the nation were north of $80, survey respondents said they were basing their 2008 drilling plans on a very modest $66.62 a barrel.

The 2008 Survey of Independent Operators is almost a mirror image of the 2007 survey in that a year ago–following 10 months of declining crude oil prices–natural gas operators were much more optimistic than their crude oil brethren, predicting a 40 percent increase in 2007 activity compared with only a 24 percent increase by oil operators (The Reporter, January 2007, pg. 45). 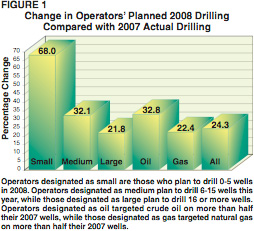 This year, after a 10-month upward trek in crude oil prices, survey respondents primarily interested in drilling oil wells project a 33 percent increase in drilling activity (Figure 1) compared with only 22 percent for gas-well drillers. As usual, the small-category of survey respondents leads all categories, predicting a 68 percent increase in 2008 drilling. However, it should be noted that because of the small number of wells drilled by the small-category respondents, a relatively small increase in total drilling translates to a large percentage increase.

Medium-category respondents, who tend to be more “oily” than large-category drillers, are projecting a 32 percent increase in 2008 activity while the large category indicates a 22 percent bump in drilling.

The “average” respondent to the Survey of Independent Operators drilled 20.4 wells in 2007 and anticipates drilling 25.4 wells this year. The average respondent targeted natural gas with 74.5 percent of his wells last year, but anticipates a 3.0 percentage point shift toward oil this year. That holds true even for gas-well drillers, who say they aimed for natural gas on 95.5 percent of their 2007 wells, but will do so with only 92.7 percent in 2008.

The average depth of wells drilled by all respondents in 2007 was 5,038 feet, and is projected to decline to 4,983 feet in 2008. This slight shift to shallower wells held through all categories of survey respondents except for oil-well drillers, who reported the shallowest average depth in 2007 at 4,559 feet and say it will rise to 4,795 feet in 2008. 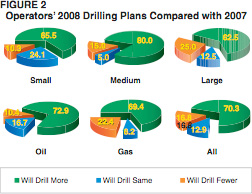 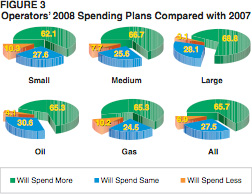 Spending plans don’t quite keep pace with drilling. Only 66 percent of all survey respondents say they expect to spend more drilling wells in 2008 than they did in 2007 (Figure 3), while 28 percent say they will spend the same and 7 percent expect to spend less.

The oil and gas categories of survey respondents are dead even with 65 percent of both projecting an increase in spending, although 10 percent of gas-well drillers say their drilling budgets will decline this year compared with only 4 percent of oil-well drillers.

When there is more than a $25 cushion between the prevailing crude oil price and the target price on which independent producers are formulating their drilling plans for the coming year, there apparently is little prices can do to induce more drilling. When asked at what dollar a barrel amount above their target oil price survey respondents would increase their 2008 drilling programs, fewer than half said there was any price that would cause them to drill more wells. 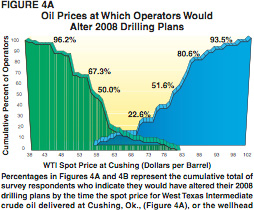 Ironically, of the 44 percent who did answer the question, most indicated a price below prevailing prices during the survey period! Indicating that their 2008 drilling plans were based on a crude oil price (West Texas Intermediate at Cushing, Ok.) of $66.62 a barrel, 51.6 percent of survey respondents said a price of $81 a barrel would cause them to drill more wells (Figure 4A). Two-thirds (67.7 percent) flagged $84 a barrel as the price at which they would increase their 2008 drilling programs, while by the time prices rose above the $90 a barrel prevailing at the time, more than 90 percent of survey respondents said they would drill more wells. 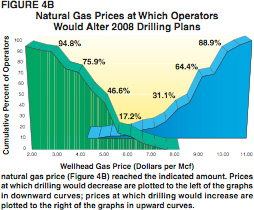 Large and gas-well drillers are more likely to hedge than their smaller or oil counterparts. Nearly three-fifths (59.4 percent) of the large-category respondents say they hedge, compared with only 17.2 percent of the small category and 20.0 of the medium category. Among the large-category respondents who say they hedge a portion of their production, 78.9 percent indicate the amount they hedge is between 26 and 75 percent.

In an apparent tip of the hat to the service and supply industry’s ability to put the equipment and supplies needed to drill more wells into the field, survey respondents most often picked the availability of drilling rigs and equipment from a list of six factors that might have a positive impact on their ability to complete their 2008 drilling programs.

In a related question, 29.7 percent of all survey respondents say they expect lead times for drilling rigs and equipment to shorten in 2008 compared with 2007, while 60.4 percent expect them to remain the same. Perhaps indicating they experienced greater problems obtaining the necessary hardware in the past, 31.0 percent of the small-category respondents say they expect wait times for rigs and equipment to decline this year, compared with 20.0 percent of medium-category respondents who expect shorter lead times and 26.7 percent of the large category. 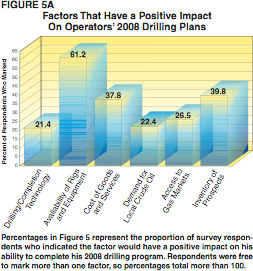 Next to the availability of rigs and equipment, the small-category respondents were most likely to see the cost of goods and services (48.1 percent) as a positive factor, followed by demand for local crude (29.6 percent). For the medium category, prospect inventory was second at 50.0 percent, followed by the cost of goods and services at 36.8 percent. In the large category, prospect inventory was second (45.2 percent), followed by a tie between drilling and completion technology, and access to gas markets at 41.9 percent.