It’s no secret that tight-oil resource plays will again dominate drilling dollars spent during 2014 in America. Industry analysts and government agencies show the United States already is the undisputed heavy-weight champion as the world’s largest producer of petroleum and natural gas. The rate of America’s crude oil growth is unparalleled.

The table is set for continued growth in demand for natural gas for power generation, manufacturing, as a vehicle fuel option, and the long-range promise of liquefied natural gas exports. This may help explain one of the pleasant surprises in The American Oil & Gas Reporter’s annual Survey of Independent Operators. Oil and gas producer and operator respondents say they will continue to ratchet up conventional oil drilling while returning to dry gas directed drilling, complementing the growth in production from the unconventional resource plays that are driving the United States toward energy self-sufficiency.

For the fifth consecutive year, respondents to AOGR’s survey project a double-digit increase in the number of wells they anticipate drilling over the next 12 months. In aggregate, survey respondents predict they will drill 29.2 percent more wells in 2014 than they drilled in 2013.

Those results are corroborated by other analyses. For example, in its Global 2014 E&P Spending Outlook, Barclays Capital Inc. projects global exploration, drilling and production spending this year will reach a record $723 billion, up 6.1 percent from $682 billion last year. Leading that charge, according to Barclays, will be North American–and especially–U.S. drilling.

Following what it calls a “modest pause in spending growth in 2013,” Barclays says it anticipates spending in the United States to accelerate by 8.5 percent this year, while Canada should return to more modest 3.2 percent growth.

“Independent producers will take the lead in pushing capital spending higher in North America,” the survey states. “The industry is in the early days of a prolonged upcycle, in our view, backed by a reacceleration of exploration and production spending in North America and further robust outlays in the international market.”

Barclays adds, “We think spending gains in the Permian Basin will outpace the rest of the market, and are also bullish on activity levels in the Bakken, Eagle Ford, Niobrara and Granite Wash.”

Barclays says it surveys more than 300 oil and gas companies worldwide for its annual exploration, drilling and production spending outlook, adding it attempts to include “all meaningful spenders on worldwide exploration and production.” Since 2000, Barclays notes, there were only two years in which capital spending growth did not meet or exceed its survey forecasts.

AOGR’s Survey of Independent Operators is mailed nationwide to producers selected at random from the magazines’ subscription list. No attempt is made to identify survey respondents, and AOGR staff compile and analyze the data. The survey does not account for dry holes, and merely asks operators what the intended target is when a well is spudded. Because of its random nature, AOGR’s survey tends to be weighted more toward the great preponderance of smaller, privately held oil and gas companies in the United States.

Respondents to the 2014 survey have been grouped into six categories for purposes of comparison. Category one respondents expect to drill 0-9 wells this year, while category two respondents will drill 10 or more. Respondents in the oil category targeted crude oil on more than half their 2013 wells, while companies in the gas category either drilled some gas wells in 2013 or anticipate drilling some gas wells in 2014. Likewise, the unconventional category of respondents drilled at least one unconventional well in 2013 or expects to do so in 2014, while respondents in the horizontal category drilled at least one horizontal well in 2013 or plan to drill one or more in 2014.

The remarkable resurgence in U.S. oil and gas production over the past decade generally is attributed to the unconventional resource development revolution made possible by advances in horizontal drilling and hydraulic fracturing technology. Consistent with that, the unconventional and horizontal categories of AOGR survey respondents have the most upbeat outlooks on 2014 drilling, with both projecting a 48.2 percent increase over 2013 (Figure 1). 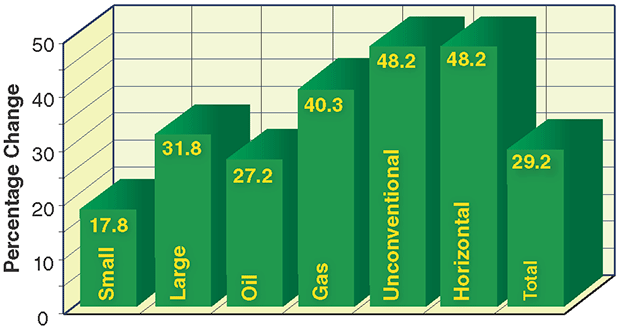 The more active drillers in category two, which report drilling a greater proportion of horizontal and unconventional wells (28 and 26 percent, respectively) last year than category one operators (19 percent each), project a 31.8 percent increase in drilling activity this year, compared with 17.8 percent for category one respondents.

Ironically, the gas driller category projects a larger increase (40.3 percent) than does the oil category (27.2 percent). Tudor, Pickering, Holt & Co., offers one possible explanation for that. A press report on an analysis described by Jeff Tillery, Tudor Pickering’s head of oil field services research, as based on an informal survey of investors, suggests, “Some pure-play natural gas drillers have decided to get back into the game.”

The Tudor Pickering analysts also advised reporters that while their expectations for the international oil companies’ U.S. onshore capital expenditures in 2014 were “flat to maybe modestly lower,” their forecast for independents was growth in the “mid to high single digits–5-8 percent.”

Tudor Pickering is especially bullish on the Permian Basin, Bakken and Utica shales, and South-Central Oklahoma. The firm says the Eagle Ford Shale, Marcellus Shale, and Mississippian Lime all look “flattish,” while the Mid-Continent, “including the aggregate Wash plays, may be up marginally.”

Oil drillers, meanwhile, targeted conventional or unconventional crude oil on 91.6 percent of their 2013 wells and will do so on 93.0 percent this year, according to the Survey of Independent Operators.

Slightly more than half of AOGR survey respondents plan to drill more wells in 2014 than they did in 2013 (Figure 2), while slightly fewer than half anticipate spending more (Figure 3). Another one-third of survey respondents indicate they will drill the same number of wells this year as last, while 46.0 percent say their drilling budgets will remain the same. Only 4.6 percent of AOGR respondents say they will spend less on drilling this year, while just 13.8 percent expect to drill fewer wells.

Although a slightly different metric, Barclays reports that 53 percent of the companies it surveys anticipate stable or decreased exploration budgets (as a percentage of total upstream CAPEX) this year, compared with 42 percent last year.

Elsewhere in its report, Barclays comments, “We believe the mix of spending is poised to shift away from large infrastructure projects toward greater drilling, evaluation and completion activity. We think the modest pause in spending growth in 2013 was the result of a combination of factors, including drilling and well servicing efficiencies in the land market, which enabled (oil and gas companies) to realize lower costs.”

It adds, “U.S. land spending in 2014 will be characterized by a shift toward full-scale development drilling as North American independents address the growing inventory of undrilled wells in their acreage.”

That is consistent with the mix of exploratory and developmental drilling projected by AOGR survey respondents. Last year, respondents report, 25.5 percent of their wellbores were exploratory, while they project only 18.3 percent wildcats in 2014. Unconventional and horizontal well drillers do the least amount of wildcatting at 8.5 and 16.3 percent in 2013, respectively. Those percentages drop to 4.5 and 8.5 in 2014.

With respect to service costs, Barclays says its survey results show that oil and gas companies generally are expecting prices to increase in 2014, including 40 percent of worldwide respondents who anticipate higher stimulation and drilling costs.

“We expect high levels of utilization will drive prices higher internationally across the full array of service and equipment product lines,” the survey states. “We believe capacity for well servicing and stimulation will tighten in 2014, and price increases may follow. Day rates for land rigs will increase modestly as a higher percentage of the industry fleet will be made up of high-spec units that command better pricing.”

Perhaps the area of greatest similarity between the AOGR and Barclays surveys are respondents’ price projections. AOGR respondents indicate their 2014 drilling plans are based on a West Texas Intermediate spot price at Cushing, Ok., of $86.87 a barrel, while Barclays respondents are projecting a 2014 average WTI price of $89.44.

Barclays calls that projection conservative and says it “supports our view that the industry can withstand moderate commodity price volatility and a modest drop in prices . . . without impacting upstream activity.”

For natural gas, AOGR survey respondents are projecting $3.67 an Mcf while Barclays respondents say they expect a Henry Hub price averaging $3.66 an MMBtu. Natural gas prices have been a little harder to gauge over the years, according to Barclays.

“From 2009 to 2012, (operators) significantly overestimated the price of natural gas when planning their upcoming year’s budgets by an average of 31 percent,” the firm says. “It appears the trend of excessive optimism surrounding natural gas prices reversed course in 2013. Henry Hub prices have averaged $3.69 an MMBtu year to date (report dated Dec. 9, 2013), which is 6 percent higher than the initial price assumption offered a year ago.”

AOGR and Barclays also both ask respondents to indicate what crude oil and natural gas prices would prompt them to either increase or decrease their drilling plans for the coming year.

Natural Gas Prices at Which Operators
Would Alter 2014 Drilling Plans 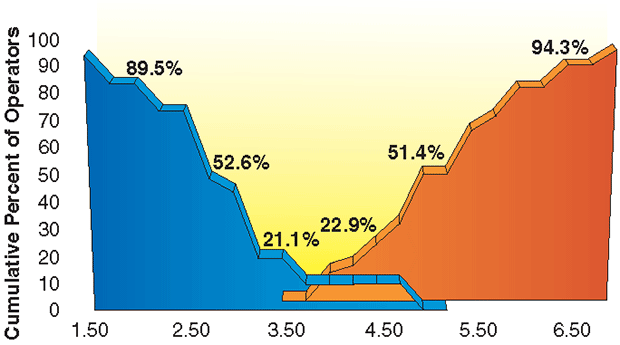 Percentages in Figures 4A and 4B represent the cumulative total of survey respondents that indicate they would have altered their 2014 drilling plans by the time the wellhead natural gas price (Figure 4A) or the spot price for West Texas Intermediate crude oil delivered at Cushing, Ok. (Figure 4B), reached the indicated amount. Prices at which drilling would decrease are plotted to the left of the graphs in downward curves; prices at which drilling would increase are plotted to the right of the graphs in upward curves.

Conversely, Barclays says, “The average operator we surveyed indicated he would not cut back on spending plans unless the price for natural gas averaged $3.16 an MMBtu.”

For crude oil, Barclays says, “The average (operator) benchmarking off WTI would boost CAPEX if WTI averages $107 a barrel this year.”

The firm notes that 47 percent of its respondents say they would increase upstream spending at $100. This rises to a cumulative 82 percent at $110 a barrel.

Crude Oil Prices at Which Operators
Would Alter 2014 Drilling Plans 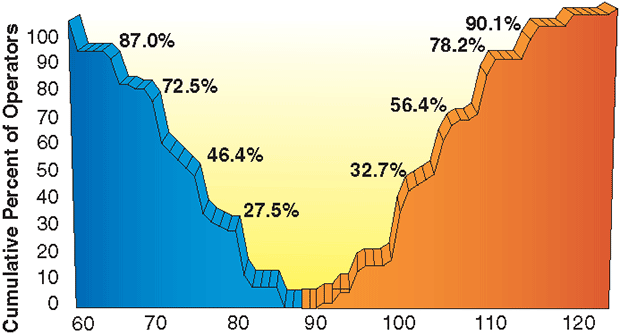 Percentages in Figures 4A and 4B represent the cumulative total of survey respondents that indicate they would have altered their 2014 drilling plans by the time the wellhead natural gas price (Figure 4A) or the spot price for West Texas Intermediate crude oil delivered at Cushing, Ok. (Figure 4B), reached the indicated amount. Prices at which drilling would decrease are plotted to the left of the graphs in downward curves; prices at which drilling would increase are plotted to the right of the graphs in upward curves.

Going the other way, Barclays says, “The price at which most (operators) would begin reducing CAPEX is . . . $74 a barrel,” which the firm notes was 24 percent less than its estimated $98 a barrel 2013 average price for WTI.

While some analysts think crude oil prices could drop to the levels AOGR and Barclays survey respondents say would negatively affect drilling, others are not so certain. An Oct. 25 Bloomberg report cites Raymond James & Associates forecasting $70 a barrel crude oil this year, but Barclays Research is projecting a 2014 WTI average price of $97.

A report from JP Morgan Chase & Co. makes the case that the U.S. oil boom is unlikely to be derailed by much lower prices, based on the cost to produce the marginal barrel needed to satisfy world demand.

JP Morgan calculates that decline rates for legacy oil fields across the United States, Europe and Latin America range from 3 to 6 percent a year. “Maintenance CAPEX per barrel has been rising around the world for these legacy fields, raising the marginal cost of oil,” the firm reasons. “Most global oil companies reportedly need $100-$125 a barrel to be cash flow neutral after CAPEX and dividends.”

JP Morgan says Goldman Sachs tracks all new global oil development projects with more than 300 million barrels in estimated lifetime production. “Over the past two years, no new projects added to the list have break-even costs below $70 (a barrel), and most have costs in the $80-$100 a barrel range, including the majority of Canadian heavy oil sites.