While the repetitive nature of this drilling technique helps isolate and address wellbore-related NPT issues and allows for more optimally and faster drilled wells through continuous learning, the drive for speed is placing greater stress on drilling equipment, especially downhole tools. The more companies turn to these drilling principles, and as the total volume of wells drilled in a factory mode continues to increase, supply chain concerns are necessitating steps to mitigate any damage to downhole equipment components such as mud motors.

To address these issues, operators are turning to predictive analytics technology such as case-based reasoning (CBR) to provide an effective solution for mitigating risks and reducing NPT.

CBR is a form of artificial intelligence that most closely mimics the way humans approach new problems. It uses past experiences to understand and solve new problems, and when applied in real time to the decision-support workflow while drilling, it creates a powerful combination of automation and human experience to help operators recognize early symptoms of larger potential problems and take appropriate measures sooner. The software has the capability to automatically recall and present relevant cases from its knowledge base of drilling experience and best drilling practices, providing the drilling engineer with recommendations for corrective action when a potential problem is first recognized.

The capabilities of rigs, downhole tools, and component systems are developing at an incredible pace to optimize drilling performance. The specific technologies enabling improved drilling efficiencies in onshore resource plays are numerous, but they include:

Yet even with all the technological advances, studies show that the industry continues to experience high levels of nonproductive time, especially in complex well construction operations such as long-lateral horizontals. The key to success is enhancing drilling efficiency while simultaneously reducing NPT.

CBR uses two forms of integrated machine learning to achieve real-time computerized intelligent behavior. The first is pattern recognition, whereby data streams are examined to identify meaningful patterns. The pattern recognition engine is designed to understand when surface and downhole parameters from a real-time data stream are trending outside an operating window defined by a rule-based structure developed through a series of multivariate statistical algorithms.

In the context of a CBR platform, satisfying the rules of one or more of the algorithms is presented to the end-user visually as an “event” indexed in time and depth and represented as a flag or graph. Events (such as an overpull, for example) can be precursor symptoms to larger problems (i.e., wellbore instability). Events are populated automatically, helping to monitor real-time data with the objective to automate the data interpretation task for the end-user.

Once the pattern recognition engine has processed real-time drilling data and identified events, the second form of integrated machine learning consists of performing the CBR process, also in real time, with the engine comparing current event patterns to the patterns captured in historical cases. The relevancy of historical cases is determined by a combination of other attributes, including tool string geometry, lithology information, hole geometry, and mud system information.

The knowledge and experience captured and contained in the CBR process provides support to engineers and decision makers across an oil and gas organization. Fast interpretation and instant access to recommendations based on best practices and lessons learned make it possible to avoid potential drilling problems, reducing risks and NPT while increasing safety and drilling efficiency.

Operators clearly are making major strides in improving efficiency. The consistency of weekly U.S. rig counts throughout 2013 makes it ideal for gauging the results of the industry’s ongoing efficiency efforts. The Baker Hughes weekly rig count began the first week of 2013 at 1,762 and ended at 1,757 in the last week. The difference between the high and low weekly counts recorded in 2013 was only 53 rigs. That kind of stability from one week to another, let alone from month to month or quarter to quarter, is a rarity by historical standards. For example, the difference between the high and low weekly counts was 245 rigs in 2012, 327 in 2011 and 503 rigs in 2010.

So, considering that rig count fluctuations had minimal impact on increases or decreases in total footage drilled in 2013, what do the numbers indicate about the trend line on drilling efficiency gains? According to the American Petroleum Institute, the total footage drilled last year increased by 4 percent, compared with 2012, despite the fact that Baker Hughes’ data show an average of 158 fewer rigs active each week than in 2012 and API reports that the total number of wells completed declined by 1 percent from 2012. Given the amount of footage being drilled in the United States today, 4 percent represents millions of feet of new borehole.

The ability to drill more footage (i.e., more wells) per rig is, in part, manifested in production growth in resource plays such as the Bakken Shale in the Williston Basin, the Marcellus Shale in Appalachia, and the Eagle Ford in South Texas. Production per rig from new wells–a key metric of both well productivity and operational efficiencies–is increasing dramatically in these basins.

However, while drilling efficiency delivered through factory drilling techniques is important for oil and gas companies, NPT can account for $50,000, $100,000 or more per incident, making it equally important to ensure that drilling operations continue uninterrupted to avoid the cost of NPT lapsed while drilling operations are shut down. The cost of a single NPT incident for a rig operating under a well program developed through factory drilling concepts can relegate what was a first-in-class hole section or well to worst in class.

While many onshore resource plays require intensive, high-efficiency drilling processes to reduce the time and cost of well construction, the operational principles are certainly not limited to North America. In fact, factory drilling has reduced the average time to drill a well from 22 to as few as seven days in one project in Mexico.

In a long-lateral horizontal drilling project in Russia, a similar approach impacted drilling efficiency to increase drilling rates from 19,685 to more than 32,808 feet a month, reducing overall drilling time and cost per horizontal well. In this case, factory drilling techniques are allowing wells with 10,000-foot vertical sections and 10,000-foot horizontal lateral sections that may have required 30-35 days three years ago to now average 17-23 days to total depth.

Factory drilling is used typically in high-volume operations with repeated well designs and known downhole risks, where the same fit-for-purpose rigs and drilling techniques can be replicated from well to well. Horizontal onshore resource plays are an ideal application. One of the most significant benefits of this drilling approach is that standardization is allowing land operators to “engineer out” common wellbore-related NPT issues such as twist off, differential sticking, mechanical sticking, and mud losses.

But even as wellbore-related NPT has less impact on the overall cost of drilling operations, operators are pushing the performance envelope across the entire drilling system, causing issues that were previously less common types of NPT to be the latest cost impact/performance barriers.

Generally speaking, factory drilling supply chain issues with personnel and equipment, and premature equipment wear and failure caused by driving equipment too hard or too long to see continuous marginal improvements, pose a major challenge to the equipment used in drilling operations.

One equipment-related form of NPT is wear and tear on downhole tools, prompting the need for more robust tool sets, especially in regard to critical measurement-while-drilling and mud motor systems. Of these two systems, it is mud motor damage that is frequently the limiting factor for further incremental drilling improvement in established drilling projects. One operator has noted that mud motor damage accounts for 35 percent of his NPT, and can cost $150,000 per mud motor-related incident.

In one mud motor damage/failure example, there were measureable early symptoms of damage sustained ahead of an outright failure that were observable using mechanical specific energy (MSE), a well-established concept that links standard surface sensor measurements to downhole drilling performance. Sustained MSE oscillations can be indicative of microstalling behavior down hole, which can result in premature motor failure. Although these oscillations can be difficult to detect with the human eye, they can be identified easily using properly designed and calibrated mathematical algorithms. Identifying operations that exhibit these symptoms enables real-time mitigation to prolong BHA life and avoid expensive NPT issues.

Oil and gas companies with well-established factory drilling operations looking for continuous incremental improvement are beginning to understand the power of this approach, and are leading the charge in using predictive analytics and CBR to stay ahead of downhole tool damage or outright failures. Other companies active in resource plays will need to follow suit to recognize the benefits of this enabling technology as high-efficiency drilling techniques become the prevalent process to reduce time-based costs, or in any applications where downhole tool damage is the predominate cause of NPT. 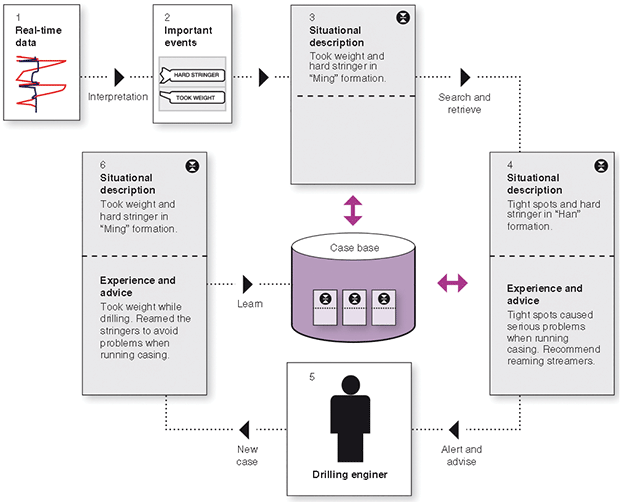 Using this mathematical approach with a CBR system, once the possibility of symptomatic mud motor damage has been identified, other failure modes (such as chunking, debonding, thermal fatigue, issues related to drilling fluids, or a plugged motor) can be determined and addressed before they impact operations. Using this approach, it may also be possible to link MWD tool failure to oscillating MSE, or similar damaging patterns, which then addresses another costly downhole component issue.

Going forward, there is tremendous opportunity for companies looking to break ground in resource plays if they understand the risks and how to effectively mitigate them. Many are looking at factory drilling as a way to tap into shale plays, and it is a technique they can use successfully, if they understand that continuous efficiency will require new technologies to assist in cost control and performance improvement.

As they look to achieve that optimization, land operators can utilize predictive analytic technologies such as CBR software to monitor for the indicators of premature damage to mud motors and other downhole tools to quickly recognize the continuous improvement that state-of-the-art drilling techniques provide to maximize their production.

PHILIP WADE is chief operating officer of Verdande Technology in Houston. He joined the company in 2010 as Western Hemisphere operations director, and subsequently served as vice president of global delivery and then as group vice president of technology delivery for Verdande Technology’s case-based reasoning solution before assuming his current position in 2013. Wade began his career in 1997 as an MWD/LWD field operations engineer with Sperry-Sun Drilling Services. He moved into real-time operation technology in 2005, first as a remote operations center engineer and then transitioning to a global real-time operations service delivery manager at Halliburton Energy Services. Wade holds a B.S. in geology from the University of Pennsylvania.