WASHINGTON–The United States is the largest manufacturing economy in the world, responsible for 21 percent of global manufactured goods. For perspective, China is second with 15 percent and Japan is third with 12 percent.

However, the nation’s own policies continually threaten that leadership position. Thanks to domestic tax, tort and regulatory policies, it is 20 percent more expensive to manufacture in the United States than in any of its nine largest trading partners–excluding the cost of labor.

It is for this reason that the unconventional oil and gas revolution in this country matters so much to manufacturers.

As recently as five years ago, domestic oil and gas supplies seemed to be dwindling, and manufacturers were increasingly relying on imported sources of oil and gas (and the unstable costs that accompanied that product).

Hidden within the 20 percent figure is an interesting fact: The United States enjoys a slight competitive advantage over its largest trading partners when it comes to energy. It is easy to see why. Manufacturers are responsible for one-third of all the energy consumed in the United States, and domestic manufacturers have long enjoyed a diverse supply of affordable, reliable energy.

The United States is the “Saudi Arabia of coal,” and for years has relied on its dominant coal reserves for base-load power generation. More than 100 nuclear power plants cleanly and efficiently produce a substantial portion of the nation’s electricity, renewable sources are growing quickly and diversifying the nation’s energy portfolio, and advances in energy efficiency continue to cut manufacturers’ energy costs.

If there has been one weak spot, it has been in the area of oil and gas. But technological breakthroughs have made vast domestic deposits of unconventional oil and gas affordable and easily accessible. What was once a significant weakness has become a major strength. The United States has, it turns out, plenty of oil and gas resources to affordably and reliably power the nation’s economy for generations to come. And that is great news for manufacturers.

In December 2011, PricewaterhouseCoopers (PwC), with support from the National Association of Manufacturers, the nation’s largest industrial trade association, released a report titled, Shale Gas: A Renaissance in U.S. Manufacturing? PwC found that full-scale and robust development of U.S. shale gas plays could result in 1 million new manufacturing jobs by 2025. Lower feedstock and energy costs could help manufacturers in the United States reduce natural gas expenses by as much as $11.6 billion annually in that same time frame.

PwC also found that chemical manufacturers had been the largest beneficiaries of this new abundance of natural gas, owing primarily to less expensive ethane. For instance, PwC found that Dow Chemical had announced five results at the time: a new ethylene unit on the Gulf Coast, increased ethane feedstock flexibility at Louisiana and Texas locations, a new propylene unit in Texas, and the restart of a dormant ethylene unit in Louisiana. Formosa Plastics announced a $1.5 billion, 800,000 metric ton/year ethylene plant in Texas. Westlake Chemical is expanding ethylene capacity in Louisiana this year and again in 2014, and is considering an expansion in Kentucky. And Nucor is building an iron facility in Louisiana and is working on at least one other major project.

PwC found that the benefits of shale gas for manufacturers were not limited to major natural gas users; the benefits extended throughout the supply chain. According to PwC, companies that sell goods such as metal tubular products and drilling and power equipment were likely to experience near-term growth in sales as domestic natural gas production rates increased.

These higher production levels also would yield benefits higher in the value chain, such as manufacturers of components used in drilling equipment. Overall, 17 chemical, metal and industrial manufacturers commented in Securities & Exchange Commission filings in 2011 that shale gas developments drove demands for their products, compared with none in 2008.

In the 13 months that have passed since PwC released its study, the impact of unconventional oil and gas on manufacturing has become even more pronounced. Nucor, the manufacturer building the $750 million iron facility in Louisiana, announced a $3 billion joint venture with Encana for 20 years of access to its natural gas production. Mitsubishi plans to build an acrylic-resin processing plant adjacent to one of Dow Chemical’s new ethylene plants. Fertilizer manufacturer CF Industries is spending $2.1 billion to expand its fertilizer manufacturing operations. Formosa Plastics increased the size of the Texas ethylene plant included in the 2011 PwC report.

Moreover, Canadian methanol producer Methanex announced in 2012 that it would dismantle a methanol plant in Chile and move it to Ascension Parish, La. BlueScope Steel Ltd., an Australian company, is building a steel factory in Ohio in partnership with U.S. manufacturer Cargill. And Indian manufacturer Essar Global Ltd. is planning to build a steel facility in Minnesota.

The bulk of these jobs will occur in states where shale oil and gas are being produced. However, IHS CERA also found that states without unconventional oil and gas production had benefited from nearly 475,000 new jobs and $12.2 billion in government revenue in 2012 alone. For example, New York, a state that has not yet even tapped into its own vast shale resources, still managed to create more than 44,000 jobs in 2012 from industries supporting unconventional oil and gas.

These supply chain jobs are largely manufacturing jobs: Manufacturers must forge the steel, make the plastic and rubber, and build the engines and equipment necessary to carry out shale oil and gas exploration and development. The IHS CERA reports are valuable additions to the universe of shale research because they isolate the value of unconventional tight oil formations, which IHS CERA estimates will represent nearly two-thirds of all crude oil and condensate production by the end of the decade.

This newfound oil and gas renaissance has brought with it increased scrutiny from the nation’s capital. With increased scrutiny comes a host of policy-related issues, from debates over how best to use this valuable new resource to the need for federal oversight and regulation. The latter issue has been a major concern for manufacturers. By early 2012, no fewer than 12 federal agencies were considering some form of oversight or regulation of hydraulic fracturing. The NAM brought this issue to President Obama, and in response, he issued an executive order in April 2012 requiring federal agencies to better communicate and coordinate with one another.

The pace of federal oversight appears to have slowed, but there are still a number of regulations under development. And there is no easier way to limit the job-creating potential of unconventional oil and gas to manufacturers than to dump so many costly, time-consuming regulations onto the drilling and development process that the oil and gas never gets out of the ground.

One regulation that greatly concerns manufacturers is the pending disclosure and well stimulation rule being developed by the Bureau of Land Management. The BLM performed a cost/benefit analysis of the proposed regulation, and under virtually every scenario modeled, the rule’s benefits outweighed its costs. But BLM vastly underestimated overall costs by orders of magnitude.

An economic analysis performed by John Dunham & Associates for the Western Energy Alliance found the BLM’s proposed rule would cost $1.615 billion for new and existing wells in the 13 Western states that contained the preponderance of the nation’s federal and Indian lands. The regulation would impact an estimated 5,000 wells waiting to be permitted or drilled. The study found that Wyoming would see the biggest cost impact from the proposed rule, with an average $771.7 million in costs, followed by New Mexico with $169.0 million, Utah with $155.2 million and Colorado with $142.7 million.

States have long been the primary regulators of hydraulic fracturing. The NAM believes states should continue to be the main regulators of fracturing and is concerned that reactive regulation could harm any potential gains resulting from increased exploration of shale oil and gas. Where there is a perceived deficiency in any one state’s regulatory mechanisms, the federal government should work with the state to “fill in the gaps,” rather than impose a one-size-fits-all federal rule on states where no deficiencies exist.

In fact, there are programs in place to ensure that state regulation is sufficient. STRONGER Inc. (State Review of Oil & Natural Gas Environmental Regulations) reviews states’ oil and gas regulatory programs and recommends improvements. The Interstate Oil & Gas Compact Commission also supports the states with model regulations. There is no legitimate reason why the continued operation of these programs will not be sufficient to ensure effective state regulation that meets the federal government’s goals.

No matter what level of regulation ultimately is settled on, it is clear that the genie is out of the bottle when it comes to unconventional oil and gas. The International Energy Agency reported in its latest World Energy Outlook that the United States could become a net exporter of natural gas by 2020. ExxonMobil’s 2013 annual Outlook for Energy estimates North America will transition from a net importer to a net exporter of oil and oil-based products by 2030. And the U.S. Energy Information Administration reported that in 2011 and 2012 that wholesale power prices declined in every U.S. region.

This is all great news for manufacturing in the United States, which could experience a true renaissance with the right energy policies in place. 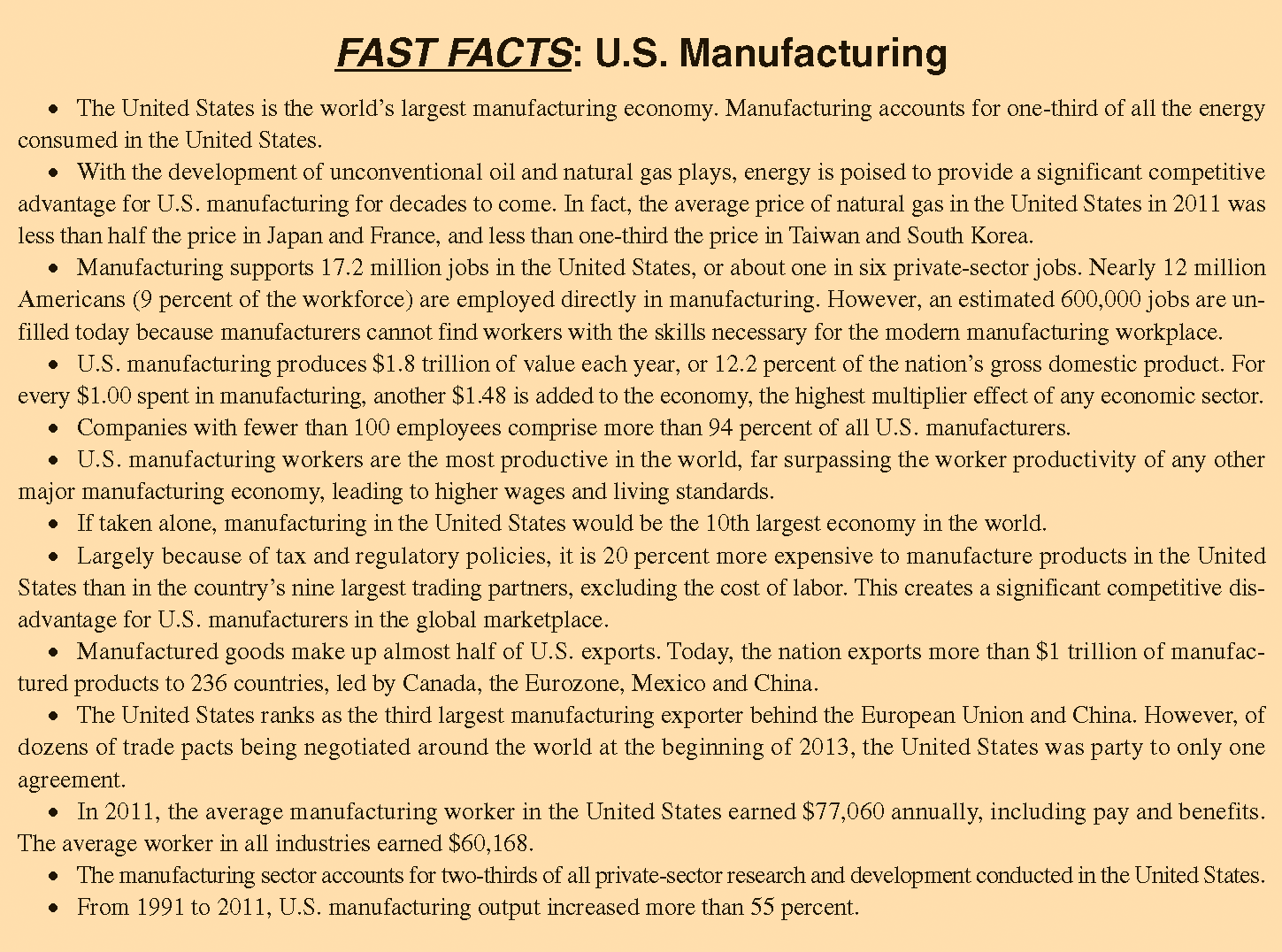 ROSS EISENBERG is vice president, energy and resources policy, at the National Association of Manufacturers, the nation’s largest industrial trade association representing small and large manufacturers in every industrial sector and in all 50 states. His expertise includes energy production, air and water quality, climate change, energy efficiency, and environmental regulation. Before joining NAM in 2012, Eisenberg spent five years as environmental and energy counsel at the U.S. Chamber of Commerce. He was also the executive for the Chamber’s Environment & Energy Committee. Prior to that, Eisenberg spent five years as an environmental, energy and insurance coverage attorney in the Washington office of Greenberg Traurig LLP, where he represented small and large companies on a range of environmental and energy matters. Eisenberg holds a B.A. from Emory University and a J.D. from Washington & Lee University School of Law.