By Mike Mayers and Josh Haugan

HOUSTON–U.S. tight oil plays have dramatically shifted the landscape in global crude oil markets. But these highly productive reservoirs do not yield only oil and liquids. From North Dakota to West Texas, dry natural gas production is on the rise. In fact, growth in natural gas output easily is outpacing growth in oil production in the very basins that have been the epicenters of the tight oil revolution.

In the Williston Basin, the North Dakota Industrial Commission’s Oil & Gas Division reports that gas production has increased by one-third since December 2017, from 2 billion to 3 billion cubic feet a day. That increase was 14% greater than the rate of oil production growth during the same period. Permian Basin gas production has grown even faster, jumping by 38% since 2017 and outpacing by nearly double digits the Permian’s world-leading growth in oil production during that time frame, according to statistics from the Texas Railroad Commission.

What to do with all the associated gas? Historically, the practical alternatives to shipping on pipelines have been limited to flaring and reinjection for pressure maintenance. Producers now have a viable new option: “gas-to-wire” remote generation technology to power on-site production and processing equipment independent of the electric utility grid. This strategy gives operators a highly beneficial outlet for stranded or low-value associated gas production without requiring long-term pipeline capacity commitments while also eliminating the cost of running utility power service to remote production sites.

Several factors are driving the adoption of field-gas-to-electric power solutions among both upstream and midstream operators. Chief among them, of course, is the eternal race to claim low-cost producer status. Add to that considerations such as:

Gas transportation and midstream infrastructure have undergone a period of massive expansion across tight oil basins to move associated gas production to globally connected market centers. Partly as a result, liquified natural gas and pipeline exports to Mexico are at record highs, and gas consumption in markets such as electricity generation continues to rise. However, associated gas volumes still are backing up in tight oil plays, particularly in the Delaware and Midland basins, where production growth has outpaced pipeline take-away capacity additions.

With so many external dynamics at play and freely available wellhead gas at hand that could eliminate costly diesel generators and save as much as $250,000 in monthly diesel fuel costs, it is not surprising that operators have many questions–and hesitations–before embarking on a chosen path. As with any technological solution, producers are right to ask questions.

They may have perceptions or assumptions based on past experiences that unintentionally slow an operation’s move to nondisruptive, innovative gas-to-wire systems that reduce cost and drive new revenue into profit-challenged operations. They have legitimate concerns about maintaining a safe, well-functioning operation as they produce the power for which, in some cases, they have waited months.

In all cases, customers require proven expertise to design, install, operate and maintain a unique, complex engineered-solution at the project site to address a pressing, difficult problem while deriving value-adding ancillary benefits. These benefits include the ability to scale the power supply strategy to cost-effectively synchronize with and enhance the producer’s future plans. To fully capitalize on gas-fired remote power generation applications, it is important that operators think beyond a simple “fix-it” approach to achieve a mentality that asks, “What else can gas-to-power deliver?”

For example, in the Permian Basin, an operator of a complex project needed a solution to provide temporary power at a multiwell site producing both oil and gas. The operator needed significant horsepower (5 kilowatts) to run electric submersible pumps until utility electrical service could be installed. In this area of the basin, the local utility was six months–and counting–behind schedule in installing new hookups. The producing company brought independent thinking (its own as well as that of outside experts) to demonstrate the ability to innovate an immediate solution while many of its peer competitors remained at the mercy of utility constraints.

For many operators, additional power solutions engineered by nonutility grid experts have introduced both unanticipated cost savings and new revenue streams by changing the operators’ relationships to and expectations of produced associated gas that previously had been flared. By leveraging a well-designed power system initially sourced to keep operating schedules on track, these companies now are able to deploy less valuable gas from what were once waste streams to power sites’ production operations. 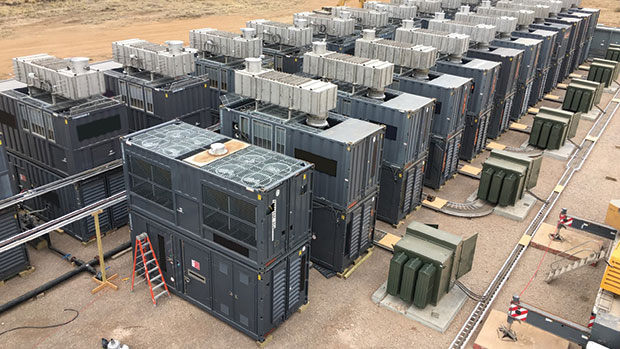 As an added benefit, they now can sell the more desirable gases from this wellhead byproduct for newfound income. Working with partners to mitigate emissions from power systems fueled by this repurposed natural gas, operators can be responsible producers helping cleaner, pipeline-quality gas make its way to homes, schools and businesses for heating and other purposes, while supporting their own revenue goals.

Critically, gas-to-power systems also offer an oil and gas company the means to control its power supplies. During the past couple years, as engineering has advanced to add gas stripping and conditioning to generate revenue-producing gas, some companies have elected to forego utility service altogether. Maintaining on-site power configurations allows them to both control their power supplies and enjoy the unexpected financial, operational and environmental benefits associated with that. This breakthrough operating strategy stands in stark contrast to electing to shut in or flare valuable gas production.

As a gift to the environment and a bonus to the producer, burning the fuel gas for site power creates fewer emissions than flared rich gas that includes methane, propane and butane components. Plus, electric engineers who design complex “microgrids” unique to many industry applications know how to treat the generators with add-on equipment beyond the manufacturer’s specifications to reduce emissions still more.

This additional expertise produces the added benefit of helping the operator achieve and exceed regulatory standards, including federal and area regulations such as those in a sensitive attainment area or to meet federal Bureau of Land Management limits. In one yearlong project powering a cryogenic processing plant, emissions controls met and exceeded state government mandates.

And for additional time savings and improved compliance reporting, remote monitoring data quickly provides information for state-required reports, whether the cryogenic plant operates in Pennsylvania or the Gulf Coast region.

By their nature, flexible and modular on-site microgrids can adapt quickly to changing power needs. An experienced power configuration team that is accustomed to providing natural disaster power recovery to vast communities within hours and days–backed by a robust, diverse and geographically well-positioned fleet–can address a drilling or production site’s changing power needs with ease. Such a team can expand on-site generation capacity to match growing production operations, taking available supply from 100 to 2,000 kilowatts in only one-four weeks.

Or conversely, in a case such as a fracturing scale-down, the operator relying on an on-site power grid that is customized to its business strategy immediately avoids overpaying for 25 megawatts of power because it is able to pre-emptively engineer power supply to meet reduced needs. This is another key competitive advantage for the low-cost producer.

The need for reliability and peace of mind affects operators’ decision making about power supply as well. Redeploying associated gas greatly aids reliability, in part, because of remote monitoring and maintenance capabilities, which allow operations teams to focus on their real jobs: increasing production. While latecomers to the temporary power sector are realizing that remote monitoring is becoming an industry standard, well-established monitoring operations of seasoned providers resemble NASA monitoring stations, where all equipment–regardless of location–is under constant observation and control from afar. Remote operations monitor the megawatt output, voltage and much more before an issue even comes to a client’s attention.

The engineering behind the system, the caliber and training of its technicians, built-in backup systems, and ways to connect and disconnect without creating disruptions also should be on an operator’s list of considerations for any on-site grid solutions provider. Moreover, operators should think of the long term right from the start.

In some areas, operators are achieving more than they initially knew to request and have been moving beyond the initial stopgap business model. While they once only utilized engineering teams and custom-engineered equipment configurations after fracturing, completion and facility construction to produce a temporary electric service solution while they awaited utility service, they now deploy waste stream gas power strategies to deliver long-term operational efficiencies.

It is a good thing when a “temporary” power provider’s microgrid experts seem to interrogate an oil and gas company’s electrical engineers and asset team members about a site’s operation and future business plans. The operations team may be enlightened when the engineered solution not only responds to the immediate needs, but also pre-empts future problems while introducing numerous cost reduction opportunities to right-size the business. This provides greater control over the site’s ability to increase production, and as mentioned, adds new revenue to offset costs to help drive shareholder value for the long term.

MIKE MAYERS is a business development manager at Aggreko. His responsibilities include providing high-value, high-impact and complex gas-to-power solutions for U.S. onshore upstream and midstream operations. Before joining the company in 2012, Mayers was president and chief operating officer of CalX Minerals, a managing member of Aspen Operating, and a technical sales manager at Johnson Controls. He holds a B.S. in business and economics from Regis University.

JOSH HAUGAN is business development and marketing manager at Aggreko. He joined the company in 2010 as northern region sales manager after beginning his career as an account manager and digital account strategist at Anchor Marketing and an interactive and SEO sales consultant at the Grand Forks Herald. Haugan holds a degree in marketing communications from the University of North Dakota.