CO2 EOR has been under way for 30 years in the United States, particularly in oil fields in the Permian Basin, the Gulf Coast, and the Rocky Mountains. As shown in Figure 1, CO2 EOR contributes about 284,000 barrels of daily oil production (or 6 percent of total U.S. crude oil production). There are 123 CO2 EOR projects in operation today in numerous regions of the country (Figure 2). In 2012, 62 million metric tons of CO2 were supplied to U.S. EOR operations. About 15 percent of that total annual supply came from industrial sources, such as natural gas processing, ammonia and fertilizer plants. 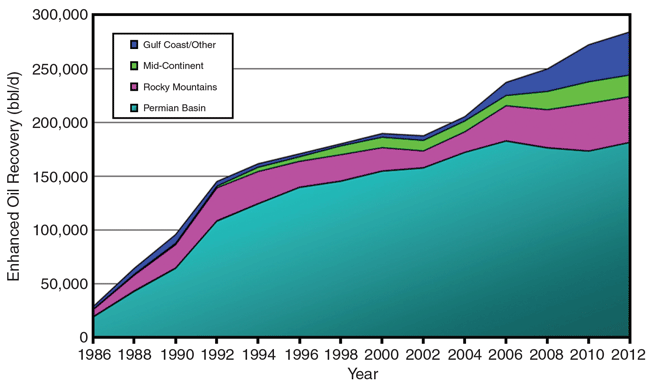 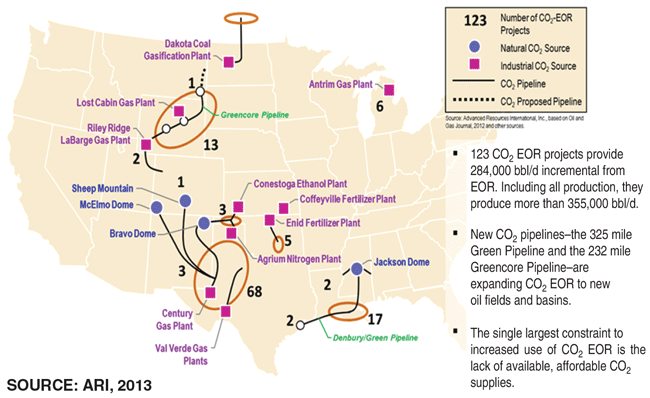 However, CO2 EOR operations traditionally have focused on optimizing oil production, not carbon dioxide storage. Nonetheless, CO2 EOR can result in effective storage. In general, nearly 100 percent of the initially acquired/purchased CO2 over the course of EOR operations (not that which is recycled) will remain in the reservoir at the end of active injection.

The main barrier to growth in oil production from CO2 EOR is insufficient supplies of affordable CO2. The growth of carbon dioxide flooding in West Texas, Wyoming and the Gulf Coast is constrained by supply, and CO2 from current sources is fully committed. While a number of efforts have been under way to alleviate this supply shortage, new CO2 supplies are absorbed quickly.

In fact, the situation in Texas has resulted in “demand pull” on industrial CO2 capture, where state legislative and regulatory activity has evolved to encourage increasing CO2 supplies from industrial sources to serve the EOR market.

The U.S. Department of Energy’s National Energy Technology Laboratory concludes that “next-generation” CO2 EOR can provide 135 billion barrels of incremental technically recoverable oil in the United States, with about half of that total (66 billion barrels) economically recoverable at a West Texas Intermediate oil price of $85 a barrel, a CO2 market price of $40 a metric ton, and a 20 percent return on investment before tax.

As shown in Figure 3, technical CO2 storage capacity potential offered by EOR operations would equal 45 billion metric tons. More than 19 billion metric tons of CO2 will need to be purchased by EOR operators to recover the 66 billion barrels of economically recoverable oil. Of this, about 2 billion metric tons would be from natural sources and currently operating natural gas processing plants capturing CO2. The remainder of the CO2 demand would need to be provided by new industrial CO2 sources. This market for captured CO2 emissions would be sufficient to store the emissions from 91, 1-gigawatt coal-fired power plants over 30 years, according to the NETL analysis. 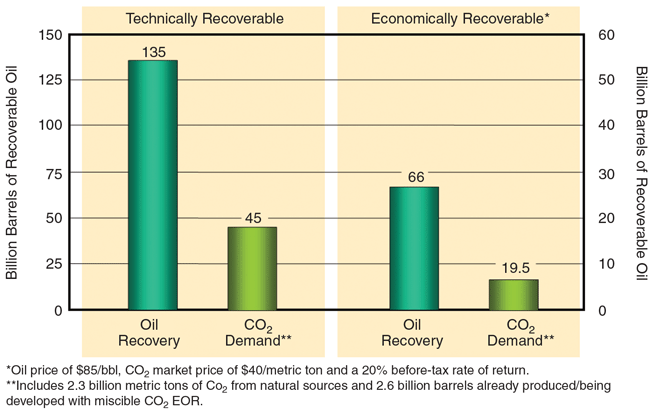 In addition, CO2 EOR could be applied to residual oil zones, which exist below the oil/water contact in the lower portions of oil reservoirs that have been hydro-dynamically swept by the movement of water over geologic time. One may label this movement of water and its displacement of oil as “nature’s waterflood.” Because the “left behind” oil in the ROZ is at or near residual oil saturation, CO2 EOR is required to remobilize and recover this oil.

In a series of studies for the U.S. Department of Energy, Advanced Resources International and Melzer Consulting have identified 42 billion barrels of oil in place below existing oil fields in three U.S. basins: the Permian in West Texas, the Big Horn in Wyoming, and the Williston in Montana and North Dakota. Additional work by Melzer Consulting for the Research Partnership to Secure Energy for America shows that the ROZ resource also occurs beyond the outlines of existing oil fields as a series of aerially extensive “fairways.”

Combining the potential of “next-generation” applications of CO2 EOR to both conventional reservoirs and to ROZ areas, 100 billion barrels of incremental oil could be economically recoverable in the United States.

DOE/NETL has developed a growth forecast for near-term sources of CO2 supply based on information on current sources for EOR, estimated remaining CO2 reserves from natural sources, and CO2 supply projects that have become operational recently, are under construction, or are in the final stages of design and financing. Anticipated growth in injectant supply between 2012 and 2018 provides a reasonable basis for estimating near-term growth in CO2 EOR production, based on assumed utilization ratios for CO2 purchased/acquired per incremental barrel of oil produced from EOR. 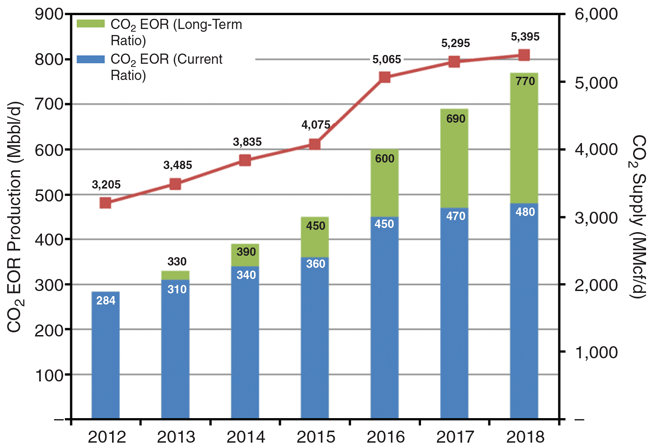 SOURCE: ARI, based on DiPietro, Balash and Wallace from SPE “Economics & Management,” April 2012

Looking at global potential, a study by Advanced Resources International for the International Energy Agency’s greenhouse gas research program assessed the CO2 EOR and CO2 storage potential of the 54 largest oil basins in the world. The assessment concludes that 50 of these basins have reservoirs amenable to miscible CO2 EOR.

Updating this work, and assuming state-of-the-art technology, the largest discovered fields in these basins (those greater than 50 million barrels of original oil in place) alone have the potential to produce 470 billion barrels of additional oil, and store 140 billion metric tons of CO2. If “next generation” CO2 EOR technology could be applied successfully to these and smaller fields, along with fields that are yet to be discovered, the worldwide application of CO2 EOR could recover nearly 1.3 trillion additional barrels, with associated CO2 storage of 370 billion metric tons (Table 1).

Since storing CO2 in association with EOR can substantially offset some of the costs associated with CCS, it can encourage applying CCS application in the absence of other incentives. On the other hand, significant expansion of oil production utilizing CO2 EOR will require volumes of CO2 that cannot be met by high-purity sources alone. 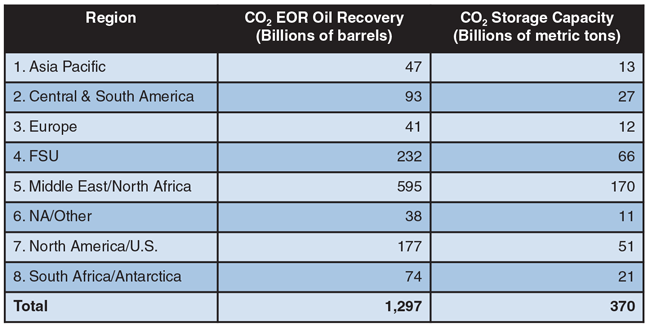 This is resulting in a fundamental change in the CO2 EOR project paradigm; that is, not only does CCS need CO2 EOR to help provide economic viability for CCS, but CO2 EOR also needs CCS in order to ensure adequate carbon dioxide supplies to facilitate growth in production from EOR. Therefore, critical to any significant growth in production from CO2 EOR projects will be incentives for capturing emissions.

The United States has not enacted climate legislation that would mandate CCS, although regulatory proposals by the Environmental Protection Agency to control CO2 emissions from power plants may change this. In developing countries, storing CO2 with CCS, especially if deployed in conjunction with EOR, faces many challenges to be adopted within the United Nations’ clean development mechanism.

Moreover, in the United States, numerous regulatory and liability issues, and uncertainties, associated with CCS are hindering wide-scale deployment, particularly with regard to a lack of regulatory clarity regarding the process and requirements associated with the transition from CO2 EOR operations to permanent geologic storage.

In the past few years, significant progress has been made in developing such legal and regulatory frameworks, most notably in the United States, Australia and the European Union. Based on this progress, the International Energy Agency published Carbon Capture and Storage Legal and Regulatory Review to provide a knowledge-sharing forum to support national-level CCS regulatory development, as well as Carbon Capture and Storage Model Regulatory Framework, which seeks to assist governments in developing appropriate frameworks by drawing on CCS regulatory frameworks already in place.

The benefits associated with overcoming the implementation barriers are unquestionable. CO2 EOR can provide large new revenues to federal and state treasuries and other participants in the CO2 EOR value chain. In the United States, for example, recovering 100 billion barrels would result in $8.5 trillion in revenues and economic activity accruing to the participants in the value chain, assuming an $85/bbl oil price and a $40/metric ton CO2 market price.

As illustrated in Table 2, the U.S. economy would be a large beneficiary, receiving $2.65 trillion in revenues. Federal and state treasuries would receive total revenues of $1.98 trillion, while electric power and other industrial companies would receive $1.32 trillion. For its part, the U.S. oil and gas industry would receive $18.50/bbl for return of and return on the capital investment, while private mineral owners would receive $7.70/bbl.

Potential Distribution of U. S. Revenues
from “Next-Generation” CO2 EOR

The economics of CCS can benefit by combining with CO2 EOR. The revenues (and cost avoidance) from the sale of carbon dioxide for CO2 EOR (perhaps combined with other policies) can help make CCS economically feasible and overcome some barriers to CCS, while producing oil with a lower CO2 emissions “footprint.” In addition, CO2 EOR can provide large new revenues to federal and state treasuries and other participants in the value chain.

Large-scale implementation of CO2 EOR is dependent on growing CO2 supplies from industrial sources, and can offer large amounts of carbon dioxide storage capacity. In fact, CO2 EOR in oil fields can accommodate a major portion of the CO2 captured from industrial facilities for the next 30 years. However, both CCS and CO2 EOR require supportive policies and actions. Supportive policies and prebuilt CO2 pipelines would greatly accelerate the integrated deployment of CO2 EOR and CCS projects.

Editor’s Note: The author acknowledges the U.S. Department of Energy’s National Energy Technology Laboratory, particularly Phil DiPietro, and the IEA greenhouse gas research program, particularly John Gale, for sponsoring much of the work used to derive the results presented in this article.

MICHAEL L. GODEC is a vice president with Advanced Resources International Inc. in Arlington, Va. He has prepared numerous assessments of the potential sequestration capacity and economics associated with geologic storage in oil and gas fields, deep saline aquifers, and unmineable coal seams, and has examined CO2 storage and possible CO2 EOR opportunities for numerous proposed power plants and industrial facilities. Godec participated in all U.S. Department of Energy efforts to assess CO2 EOR and CO2 storage capacity in depleted oil fields. He also has completed studies of the global potential for CO2 EOR and associated storage for UNIDO, the IEA greenhouse gas program, and the U.K. Department of Energy and Climate Change. Prior to joining ARI, Godec directed the oil and gas consulting practice at ICF Consulting. He holds a B.S. in chemical engineering from the University of Colorado and an M.S. in technology and human affairs from Washington University in St. Louis.