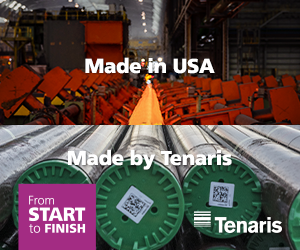 HOUSTON–Manual tank gauging at onshore oil and gas facilities is viewed as a cost-effective solution for managing tank inventories and custody transfer measurements. The American Petroleum Institute’s Manual of Petroleum Measurement Standards (MPMS) Chapter 18.1 standard provides guidance for how such measurements are to be made, but there is increasing concern about accounting accuracy, production losses and safety.

For example, opening tank thief hatches can lead to the rapid release of high concentrations of hydrocarbon gases and vapors. This may result in very low oxygen levels and toxic hydrogen sulfide levels, as well as flammable conditions around and over the tank thief hatch, all of which pose serious safety risks to workers while gauging tanks, collecting samples or transferring fluids.

As outlined in a bulletin on gauging and sampling from the National Institute for Occupational Safety & Health and the Occupational Safety & Health Administration, eliminating hand-gauging and utilizing automated technology can reduce risks to workers. In addition, better insights into tank inventory levels can reduce the chance of spills and optimize transfer logistics, thereby reducing road traffic hazards.

To address this issue, API has released MPMS Ch. 18.2, a new standard that provides guidance for crude oil custody transfer from lease tanks using alternative measurement methods. The goal is to allow existing technology and standards to be used for custody transfer while eliminating manual tank gauging and the opening of thief hatches.

API Ch. 18.2 defines three zones where the quantity and quality of oil being loaded from a lease tank to a truck trailer can be measured. The zones are defined as the tank zone, transition zone, and trailer zone.

API Ch. 18.2 requires six categories of data be measured for custody transfer, which can be done using equipment located in one or multiple zones. The categories are:

API Ch. 18.2 recommends creating a list of existing and/or available equipment for each zone and documenting the equipment uncertainty used to determine the quantity and quality of crude oil. Section 13.2 outlines a process for calculating the overall uncertainty of the custody transfer operation.

These data can be used to develop a method that minimizes overall measurement uncertainty while meeting contractual obligations. Because of the different types and possible permutations of potential devices on the market, this article focuses on the indicated volume measurement using the two most common methods: automatic tank gauging and LACT units.

API Ch. 18.2 addresses the unique requirements of small lease tanks in many onshore operations by referencing the Ch. 3.1B standard practices, but with reduced accuracy requirements associated with API MPMS Ch. 18.1. This allows using instruments more suitable and economical for the application, such as guided-wave radar.

Guided-wave radar traditionally has provided validation of well production rates, off-lease transfers of produced water, and tank gauging operations for oil custody transfer. Many operators have standardized around using guided-wave radar and have an installed base of instruments.

Operators now can realize additional benefits by adopting the technology for custody transfer. They also will need to develop procedures for obtaining product quality measurements in the transition zone to achieve the safety benefits of keeping their personnel off tanks.

Manual tank gauging requires high operator competency, is subject to human error, and frequently must be performed under difficult weather conditions. When oil is hauled off the lease site, the operator often must ensure that the volume delivered is not less than what was measured to be contractually compliant. This can lead to rounding open- and end-level measurements, which can introduce lost-and-unaccounted-for production errors. 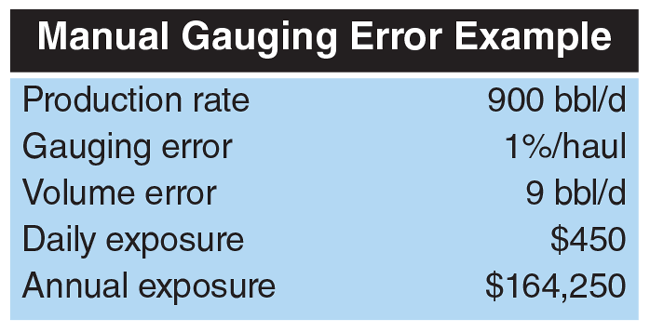 An example shown in Table 1 uses a typical shale well producing 900 barrels of oil a day. A 1 percent error in tank gauging represents an annual fiscal exposure of $164,000 at an oil price of $50 a barrel. One operator’s efforts to verify the extent of measurement variability within a team of experienced gaugers indicated volume discrepancies as high as ±8.0 percent.

Lack of visibility to production separator upsets will send oil to the water tank or water to the oil tank. If not detected, oil in the water tank will be lost, especially if the operator is using a third-party water hauler during water transfers. Unaccounted-for or unauthorized hauling of produced oil in the water tank from a multiple-well pad facility could exceed $1 million a year in lost revenue if not accurately monitored and recovered. 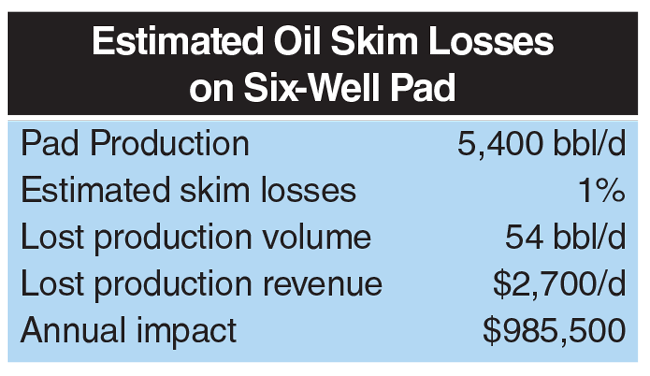 Table 2 shows an example from a six-well pad where each well averages 900 bbl/d in production. Excess water can lead to an unexpected oil tank capacity loss, resulting in a spill or a well being shut in from a high-level alarm.

Many operators now are realizing the economic benefits of automated level measurement solutions, such as guided-wave radar, to ensure accurate inventory measurements, prevent spills, optimize transfer logistics, and verify custody transfer measurements. Leveraging wireless, guided-wave radar technology has added advantages that reduce installation costs by as much $24,000 on a four-well pad, according to a case study by WPX Energy.

Diagnostic capabilities and interface measurements can detect whether oil or water has been transferred to the wrong tank, helping to minimize lost production and provide insight to correct separator problems.

LACT units are another method for transferring ownership of crude oil from production facilities to pipelines or trucks, and have many advantages compared with most other custody transfer methods. A LACT system offers unattended measurement while maintaining accuracy of ±0.25 percent or better.

In addition, it makes for better use of labor and better scheduling of runs to pipelines while eliminating measurement errors related to tank bottom buildup or encrustation, and reduces operating and maintenance costs.

With LACT units, the flowmeter must measure and quantify the fluid with a high degree of accuracy. It must be insensitive to high viscosity values, and must maintain the requested level of accuracy and reliability even when conditions and operating parameters change. Meter technologies, such as Coriolis, are designed to overcome these types of challenges and provide stable measurement over extensive service periods.

Effective validation through proving operations (pipe provers, compact provers, etc.) will ensure ongoing meter accountability while the advanced in situ diagnostics available for Coriolis meters help identify abnormal events that compromise measurement between validations. LACT units usually are installed in remote locations, and are almost always unmanned. Consequently, it is important to have remote accessibility to all data and operating conditions.

Operators ask themselves when it may make economic sense to invest in a LACT unit versus manual or automated tank gauging. Many install LACT units only when a field exceeds a company’s standard production rate to reduce fiscal measurement uncertainty and help automate larger volume transfers.

As noted, a typical LACT system has the capability of ±0.25 percent accuracy. By comparing that with manual gauging, an operator can determine the amount of fiscal exposure and production rates versus the time it would take to pay for a LACT unit installation. 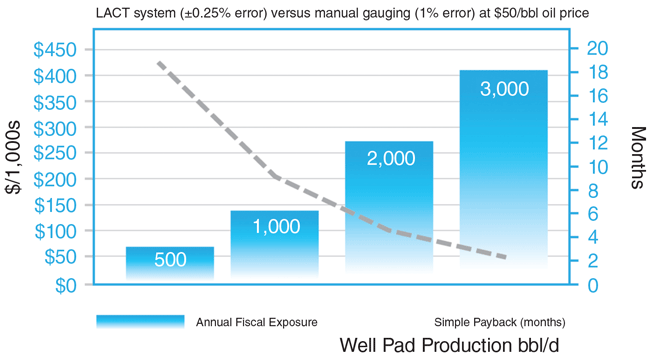 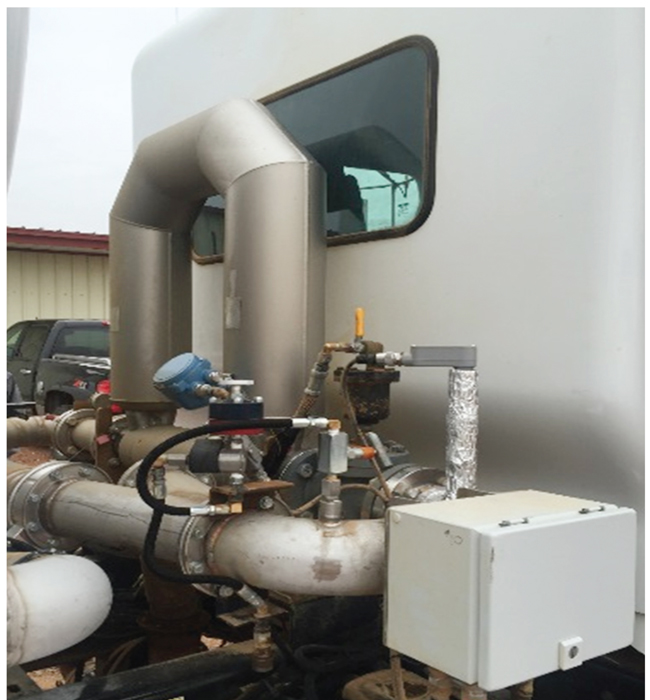 Note that while a 1 percent error was used in Figure 1, operators have reported significantly higher error percentages in manual gauging accuracy. Other considerations not included in the calculation are the cost associated with manual operations and measurements that also can justify installing a LACT unit.

No matter which method of custody transfer is chosen, all instruments and diagnostics can be brought into a central controller or remote terminal unit (RTU) for remote access or direct access on site. Human/machine interfaces can be used to automate haul transactions using manual or automatic tank gauging, or LACT-based systems. 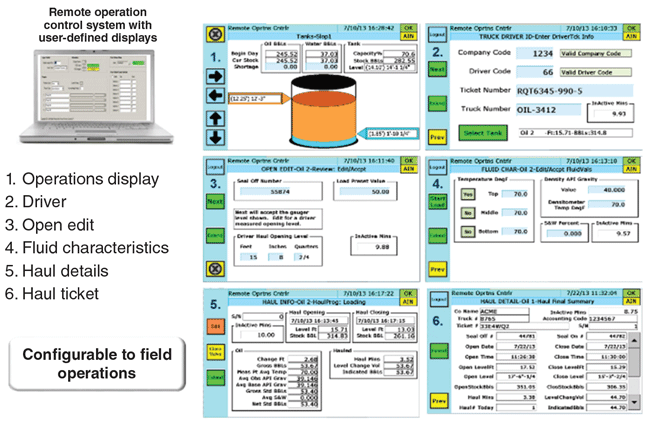 With the publication of API MPMS Ch. 18.2, there now is an industry-acceptable path that uses guided-wave radar for crude oil custody transfer from small lease tanks. Where economical, installing a LACT-based custody transfer system can pay for itself with reduced measurement uncertainty and better use of labor. With the addition of API Ch. 18.2, many operators also are implementing truck-based LACT systems that reduce the capital cost of flow measurement-based systems.

Leveraging automation systems and standards-based applications for well pad tank management has the added benefit of bringing all the measurement systems together to maximize overall efficiency and reduce fiscal risk.

Michael Machuca is director of North American upstream oil and gas marketing at Emerson Process Management. He has been with the company since 2005, helping to implement Emerson solutions in oil and gas applications. Prior to joining Emerson, Machuca worked for seven years designing oil field equipment, mostly for subsea applications. He holds a B.S. in mechanical engineering from the University of Houston.