Even with the best downhole wellbore conditions, achieving effective stimulation coverage to produce from the entire lateral is a challenge in horizontal wells. In the case of the Granite Wash well, the challenge was complicated further by the fact that more than one-third of the 4,300-foot lateral had no cement isolation in the annulus. Circulation had been lost during the primary cementing job, requiring a remedial squeeze down the annulus behind the 4.5-inch production casing.

The upper portion of the lateral had been squeezed successfully from the liner top to a depth of 11,900 feet, but a 1,600-foot span of lateral was left with no cement between the heel and toe sections. The challenge was to complete the open annulus section using standard plug-and-perf stimulation methods, isolating and initiating individual fractures at each stage in the open annulus.

The objectives were to cycle the bottom-hole treating pressure and alter the flow path in the wellbore, open annulus, near-wellbore and far-field areas while maintaining annulus and casing integrity. Altering the flow of proppant and fluid in the open annulus and near-wellbore area involved applying a cyclic combination of solutions and procedures, including:

A cyclic, but continuous BHTP increase was observed throughout the stimulation stages pumped in the open annulus section. Surface pressure characteristic signatures changed after each shut-in period. Perforating operations in the open annulus above a completed stage did not indicate proppant inflow through the new perforations. Drilling out the plugs in the open annulus section circulated trace amounts of untreated proppant, and initial flowback operations showed minimal proppant flowing to surface. Strong post-treatment production results indicate contribution from the section of the lateral that had no annular isolation.

There were two major concerns about completing this horizontal Granite Wash well. First was the challenge of figuring out how to use some form of diversion to achieve the desired multiple transverse frac system in four separate stages in the uncemented portion of the wellbore. The second key issue was preventing annulus proppant flowback during frac stage perforating, post-frac drillout and post-frac production.

The plan called for achieving stage isolation in the open annulus section by setting a composite bridge plug between stages and adding an additional 90 feet between the top and bottom perforations in each stage. This increased the distance between stages to a minimum of 164 feet, which was suggested by tracer survey results of annulus proppant transport distance in other open annulus cases.

To achieve multiple frac wings, the design called for breaking each stage treatment into two smaller halves with a shutdown (hesitation) period in between them. The diverter material was tailed in after the first half of the stage volume, and a shut-in period after displacing the diverter in the final stage allowed the fracture to close. The flow path then was expected to change during the next injection, causing the subsequent injection to be pumped at a higher bottom-hole treating pressure if the diversion method was successful.

To control sand flowback from the hybrid treatment, a surface modification agent for flowback inhibition was run on the proppant in the cross-linked gel portion of the treatment. Moreover, it was hoped that tailing in with curable resin-coated sand would curtail any flowback from the fractures into the casing during the plug and gun runs. Pressure was maintained in the casing while perforating by pumping at a low rate to keep the pressure above the instantaneous shut-in pressure (ISIP) from the previous stage just in case there was some free sand in the annular above that might fall in on the gun after perforating. 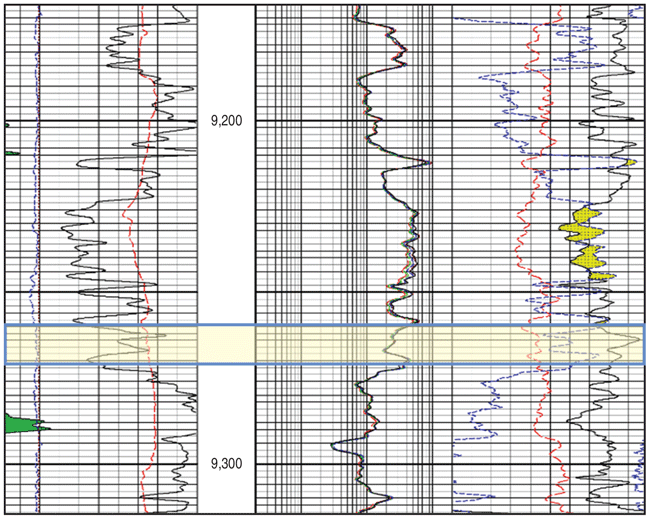 Avoiding casing failures during treatment was also a challenge. In a well with good cement throughout the lateral, the only burst concern is in the unsupported casing above the cement top in the vertical section. Having unsupported casing in the lateral brought into play burst and collapse risk in the lateral. This risk was mitigated by keeping maximum BHTP less than 80 percent of the casing collapse plus formation pressures.

During drillout with coiled tubing, nitrogen had to be added to the fluid stream to maintain circulation in the underpressured environment. If circulation was lost and sand settled out, the CT string could become stuck. An additional short trip was added in the unsupported section and a less aggressive mill was used that required more fluid and nitrogen to be pumped. The less aggressive mill also caused the milled up pieces of the plug to be smaller, allowing them to be flowed out of the well easier.

The log in Figure 1 shows the pay target in the Granite Wash “F” section. The horizontal target was moderately tight with a net height of 20 feet. Figure 2 shows the well path, with the uncemented 1,600-foot section highlighted. 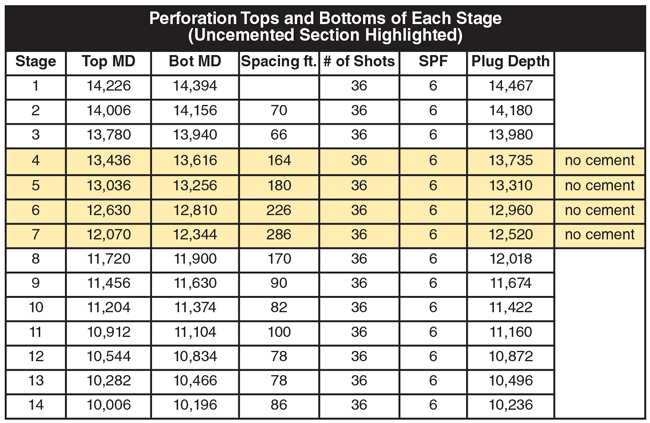 To create multiple transverse fractures in the four stages pumped in the open annulus, the treatment design incorporated a three-pronged diversion method consisting of:

With the ECDP process, these three diversion processes are cycled through many times during a single frac stage. Figure 3 shows actual pump rates and the pressure response to ECDP treatment for stage seven, the last of the four stages in the open annulus section. All four stages had incremental increases of 300-900 psi in BHTP compared with ISIP.

Probalistic rate transient analysis was used to determine the horizontal fracture effectiveness in the well’s early producing phase. If the diversion method was successful, and multiple fractures were created in the open annulus area, the normalized fracture flow area should be higher in the ECDP well than a nearby offset well completed in the same interval and with no open annulus section. The offset well was shorter and had fewer stages (10 versus 14) and clusters (30 versus 42), but its frac volume per stage was 21 percent higher than the ECDP well.

Normalizing the rate transient results to lateral length and total number of perforation clusters indicates that the ECDP well achieved more than three times the normalized surface area per cluster and per 1,000 feet of lateral than the direct offset well.

Using multiple diversion methods and pump cycles as part of the ECDP process achieved positive net pressure builds in all stages pumped in the uncemented annulus, and as indicated by the rate transient analysis, resulted in creating a large effective fracture flow area in this challenging Granite Wash horizontal well.

Lonnie J. Sullivan is a senior engineer, completion and petrophysics, at Texakoma Group. He joined the company in 2014 after 32 years with Halliburton, where he held positions as senior engineer, district manager, senior account representative and senior account leader. Most of his career has been dedicated to evaluating well logs and core data for stimulation and primary, secondary and tertiary production. Sullivan holds a B.S. in electrical engineering from Louisiana Tech University.

Bill Grieser is chief adviser, global technical services, at Halliburton. He began his career with Halliburton in 1978 as a field engineer, and his 39-year career has focused primarily on well completion and stimulation engineering, including extensive experience in applying hydraulic fracturing technologies to unconventional reservoirs. Grieser holds a B.S. in nuclear engineering and a B.S. in mechanical engineering from the Missouri University of Science & Technology.