By Matt Fry and Adam Altieri

CANONSBURG, PA.–Reduced stage spacing has been demonstrated to improve well performance, but it also adds additional stages to a well, thereby increasing completion cost. The mechanics of why reduced stage spacing improves well performance are unclear, but observations from distributed acoustic sensing may shed light on one potential mechanism: a tendency for heel-ward bias in the treatment of a stage, where dominant clusters in the heel of a stage take the majority of the treatment, independent of the number of perforation clusters or cluster spacing. 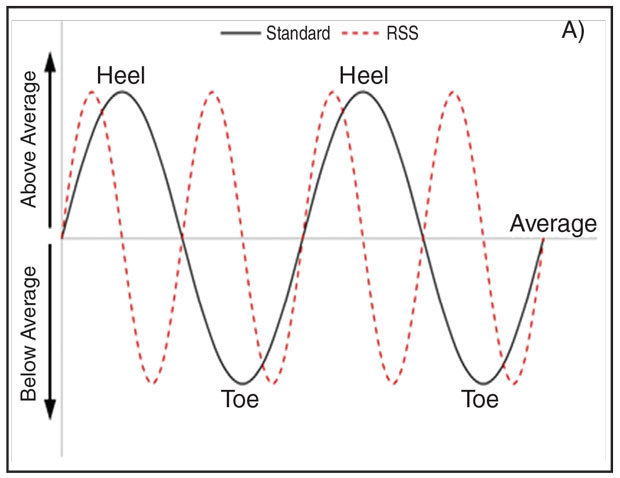 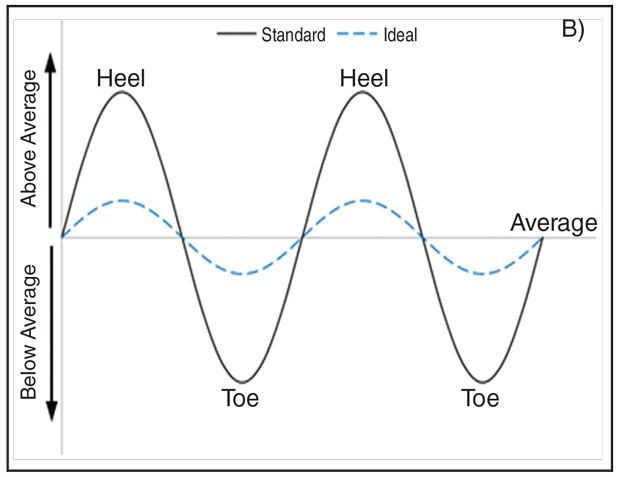 This results in proppant distribution along the length of a well mimicking a sine wave, where higher sand loading is associated with the dominant clusters in the stage’s heel, and lower corresponding to the understimulated toe clusters. Reduced stage spacing increases the uniformity of proppant distribution along the length of a lateral by effectively decreasing the period of the sine wave, thereby compressing the over- and understimulated intervals (Figure 1A). However, a more straightforward way of distributing proppant uniformly is to decrease the amplitude of the sine wave (Figure 1B).

Rockdale Marcellus LLC conducted a study to demonstrate how a perforating scheme using variable shot cluster (VSC) and limited entry (LE) techniques can accomplish this by mitigating heel-ward bias in an attempt to provide the same production uplift as reduced stage spacing. The study’s objective was to generate more uniform fracture half-lengths by preventing uncontrolled half-length growth associated with dominant heel-ward clusters taking the majority of the treatment, thereby ensuring that all perforations were treated and achieved uniform proppant distribution.

A downhole camera was utilized on multiple wells to inspect perforations for evidence of erosion and perform a semi-quantitative ranking of the amount of proppant passing through each perforation. Multiple VSC perforating schemes were observed to help ascertain which variables controlled the distribution of proppant along the length of a stage. Results demonstrate that effective flow area (EFA) is the controlling factor determining which perforations accept fluid and proppant.

In nearly all stages, perforation efficiency is 100% until such a point is reached where perforations no longer accept significant volumes of proppant. Limiting the number of perforations to the treatable EFA is required to ensure all perforations in a stage are treated, and an arithmetic model is constructed for calculating an appropriate VSC perforating scheme to promote uniform proppant distribution among each cluster.

A cost-effective and tangible method is presented to evaluate uniformity of proppant distribution. Uniform cluster treatment and proppant distribution potentially may replace less direct and costly practices such as RSS and diverters for improving well production, and offers the added benefit of potentially limiting outsized fracture half-length growth associated with dominant clusters. This study was performed in the Marcellus Shale, but generally applies to all unconventional plays that utilize plug-and-perf slickwater hydraulic fracturing treatments.

The LE technique restricts the number of perforations while utilizing a sufficient injection rate to restrict perforation capacity, thereby diverting treatment to a greater portion of the perforated interval. Although developed for conventional wells to compensate for variations in bottom-hole fracture pressure, the concept applies equally to an unconventional stage where heel clusters preferentially take treatment to the detriment of toe clusters. VSC builds on the concept of LE by restricting fluid flow even further, utilizing fewer perforations in zones that preferentially take treatment (heel clusters) and more perforations in the understimulated toe clusters.

The downhole camera was used to inspect perforations for visible signs of erosion associated with slurry exiting the perforation. A semiquantitative ranking scheme was established to characterize the amount of erosion and place each perforation in one of three categories: major erosion, minor erosion or no erosion. Five perforating schemes were tested–four geometric shot cluster (GSC) schemes (where an equal number of perforations was used in each cluster) and one VSC scheme–with variations in the number of clusters, cluster spacing, perforations per cluster and perforations per stage (Table 1). All stages used 0.43-inch entry-hole diameter perforations, 200-foot stage lengths, and 15% 100-mesh and 85% 40/70-mesh proppant.

Figure 2 shows the results of all 24 stages in one Marcellus well. Consistent heel-ward bias is seen in nearly all stages, independent of the perforating scheme, number of clusters or cluster spacing. It also is evident that the toe cluster(s) were not treated effectively, as evidenced by the absence (or limited amount) of perforation erosion in the toe cluster(s). 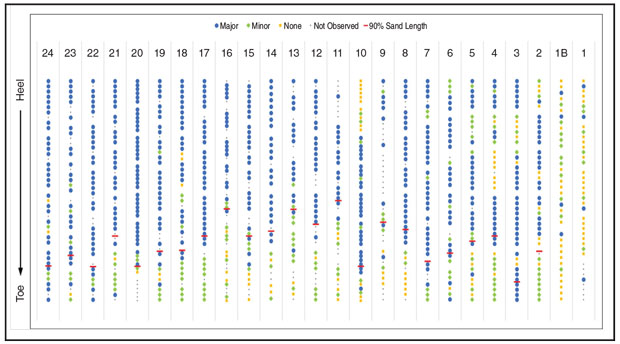 The 90% sand length was calculated by summing the cumulative volume of sand each perforation accepted (total respective proppant volume divided by number of perforations accepting each respective mesh size) until 90% of the total volume of proppant pumped in each stage was reached. Then the distance of the coinciding perforation from the heel-most perforation was determined based on the perforating scheme, resulting in a length figure. Based on this metric, the perforating scheme utilized had no impact. Even though the stage lengths were all 200 feet (plug to plug), the top and bottom perforations both were offset 20 feet from the respective plugs, so the maximum achievable length was 160 feet.

Geochemical water tracers also were employed. In general, no correlation was seen between the stimulated interval of each stage as defined via the 90% sand length and the relative volume of tracer recovered, with one notable exception: stage 10, one of the few exceptions to the persistent heel-ward bias seen throughout all stages and perforating schemes.

In addition, the 90% sand length for stage 11 was the lowest recorded in any of the 24 stages. The heel of stage 10 and the toe of stage 11 seem to represent a contiguous understimulated interval in the well, and the relative tracer contributions returned from these stages is small when compared with stages 9 and 12 above and below. We have no explanation for this, other than the tracer results seem to corroborate that something out of the ordinary occurred in stages 10 and 11.

Number of Stages with Given Number of Major Erosion Perforations 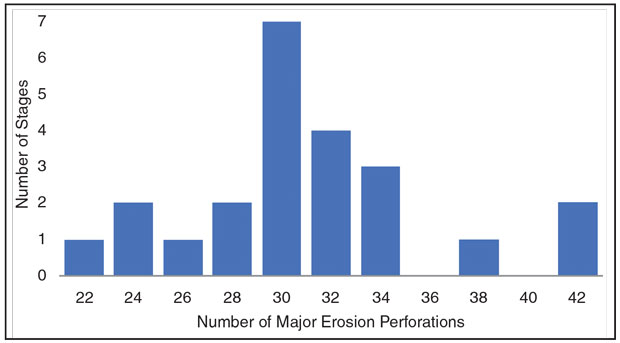 However, one factor controlling proppant distribution that stands out is EFA, or the combined area of all perforations. Figure 3 shows a relatively normal distribution with respect to the number of major erosion perforations seen in each stage. We suspect that this is not a product of the number of perforations, but simply a function of the EFA. Other factors may impact this result as well, such as formation properties, casing string diameter (5.5-inch in this example), treating rate, and more. But the near-normal distribution inspires confidence that, for this specific set of parameters, we can treat 30 perforations effectively. We have not attempted to repeat this evaluation for a different set of conditions, but have no reason to suspect that a similar approach cannot be repeated elsewhere (albeit, with a potentially different resulting EFA).

A quadratic conceptual model of proppant distribution was used to generate three VSC perforating schemes using four, six, or eight clusters. The conceptual model assumes the heel-most perforation takes the most sand, and proppant volume decreases to zero at the 30th perforation. In calculating the appropriate designs, the area under the curve was integrated and divided by the desired number of clusters. Then, the number of perforations per cluster was iterated to achieve as close to an equal area as possible, equivalent to equal distribution of proppant per cluster.

Building on the previous results, the perforating scheme was modified in a subsequent Marcellus well and the camera evaluation of perforation erosion was repeated. Although prior results indicated that only 30 perforations could be treated effectively, there were concerns that decreasing the number of perforations too dramatically would result in being rate-limited (pressuring out before achieving the desired treating rate of 100-110 bbl/minute). Consequently, an incremental step was taken to utilize a five-cluster, 34-perforation, 3-4-6-10-11 VSC perforating scheme.

The semiquantitative ranking was repeated, and the toe clusters in all observed stages (four total) contained major erosion perforations. In addition, the 90% sand length was calculated as before and increased from an average of 125 feet in the previous evaluation to 160 feet (i.e., the entire stage). No issues were experienced in regard to being rate-limited with 34 perforations.

Unfortunately, it is not yet possible to verify the production impact of these perforating scheme changes. Rockdale is still delineating its field, and production across it varies. Compounding this is the fact that we are actively optimizing other elements of our completion design, such as sand loading. The combination of these factors means we do not have a representative apples-to-apples comparison to evaluate the production impact of the perforating scheme changes. However, there have been encouraging results mitigating frac hits with more aggressive LE designs.

Another well used an eight-cluster VSC perforating scheme with an average of 30 perforations on 48 adjacent stages. In this case, 2.3% of the total water volume pumped was recovered from a well 1,000 feet away and no increased water production was seen in a well 2,000 feet away. On a normalized basis, this represents a 23% reduction in water recovered in offset producing wells, and the impact radius decreased from 2,000 to 1,000 feet. We attribute this to longer fracture half-lengths in the five-cluster well, where four of the five clusters were taking the majority of the treatment, as opposed to the treatment being evenly distributed in the eight-cluster well.

ADAM ALTIERI has eight years of engineering experience in upstream energy operations, specializing in the Marcellus and Utica shales. Most recently, Altieri served as a completions engineer II for Noble Energy, where he was responsible for performing economic analyses of completion projects, and designing and overseeing the completions of 120 wells in Pennsylvania and West Virginia. Prior to Noble Energy, Altieri served as a completions engineer for EOG Resources. He holds a B.S in mechanical engineering from Pennsylvania State University.