While industry statistics indicate frac-to-frac communication is responsible for upward of $21 billion in lost production revenue and mitigation expenses over the past two years alone, direct frac hits account for only 12% of detected events. By contrast, an estimated 82% of frac hit signal characteristics are, in fact, fluid migration between the existing tier-one parent well and the newly drilled child well. Fluid migration not only has a minimal and short-lived effect on production, but without it, an inordinate area between the wells will be left unstimulated, leaving potentially significant reserves stranded. The key is to put detected interwell flow communication events in the proper perspective.

To detect a frac hit, infill development projects may include chemical tracers, offset well pressure gauges, and microseismic or fiber-optic measurements. If a severe frac hit is detected, hasty reactive measures, such as pumping far-field diverters, usually follow. These and other traditional approaches to seal off detected interwell communications not only significantly increase costs, but can be ineffectual and even harmful to production and estimated ultimate recovery rates.

Alternatively, the efforts to promote maximum production efficiency in unconventional wells should be abandoned in favor of a more surgical and stage-specific approach that relies on interwell flow mapping and stage-by-stage flow profiles to precisely define the proximal characteristics and types of a frac hit. Until now, however, stage-level flow mapping was economically out of reach, except for the roughly 1% of so-called “science” wells.

The development of unique particle-based smart tracers and data-driven diagnostics has narrowed the economic chasm, making stage-level flow data accessible for standard unconventional wells. Field data confirm the capacity of the smart tracers to consistently deliver near real-time detection with high accuracy beyond the capabilities of chemical tracers. Importantly, the technology does so at a fraction of the costs in relation to the total cost of completions and competing alternatives.

Historic overcrowding is emblematic of today’s unconventional plays, as operators continually tighten interwell spacing to wring more production from their leaseholds. As spacing between both vertical and lateral wells narrows from 1,500 to as low as 500 feet, operators are rightly concerned that a child well could directly intersect the fracture network of an older parent or offset well. In that scenario, the two wells will overrun each other and share the same drainage space, with the then-depleted reservoir pressure drawing down production from both wells.

However, that represents the extreme; the key is to precisely identify and characterize the type and severity of a detected interwell communication event to determine what measures should be taken in response to optimize well spacing designs. Figure 1 illustrates how the various types of frac hits impact production rates and EURs.

Production and EUR Impacts from Various Types of Frac Hits 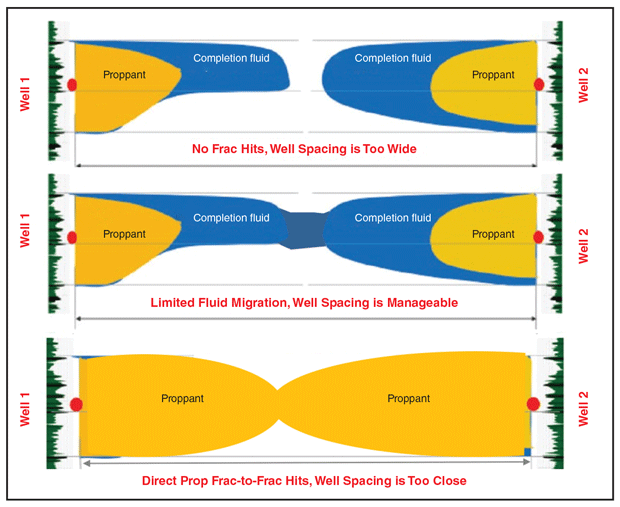 The most common interwell communication incident on a multiwell pad is pure fluid migrating through the discreet fracture network (DFN) and flowing into an area opened during frac pumping. Fluid migration is characterized by only medium overall pressure increases and the pressure gradient also builds slowly over a matter of hours. Fluid migration involves only fluids and no sand, thus any adverse communication is short-run as the unpropped fractures close after pumping ceases with very little or no impact on production.

An estimated 6% of interwell communication signals can be tracked to a phenomenon described as a poroelastic frac hit, where the net pressure acting on newly created fracture surfaces compresses the rock. More commonly referred to as frac stress shadowing, a poroelastic interaction occurs beyond the near-field fracture area and is distinguished by disturbances in the rock properties, specifically increasing the in situ stresses, with negligible to zero impact on production.

Perhaps one of the most worrisome issues is when no pressure changes or detectable tracer recoveries are measured during or after stimulation of the parent well. The detection of no interwell communication events implies no fluid mass exchange. Accordingly, it can be assumed that productive reservoir space is being left undrained between the parent and child well.

Given that a certain degree of interwell communication is desirable, the optimal solution for promoting hydrocarbon flow and EUR combines fluid migration with poroelastic interaction, while avoiding a direct hit between two sand-filled fracs. This is where the new-generation smart tracers and a surgical approach to precisely diagnose the type and severity of a frac hit play a vital role in spacing tests to enhance reservoir performance.

Measuring the severity of a perceived frac hit down to the stage level is fundamental to an effective infill development program, but until now, the detection and characterization of same is best described as guesswork. Installing a wellhead pressure gauge on an offset well and observing the response after the child well is fractured provides an indirect indication of interwell communication. A gradual pressure buildup on the offset suggests fluid migration, while a rapid increase in pressure indicates direct communication.

Response to an accelerated pressure spike often includes the pumping of diverters or pressurizing of the offset well to counteract the fracture growth, but the effectiveness of either method can be uncertain and result in unnecessary expense without an accompanying flow tracing mechanism.

Operators have long relied on water- or oil-soluble chemical tracers to evaluate fracturing performance, but the solubility of conventional liquid tracers requires they be tailored for the individual fluid streams intrinsic to each stage. The heterogeneity of shale rock along a horizontal lateral and the assorted fluid compositions requires different and specially formulated chemical tracers that can add as much as $150,000 in incremental costs per well.

Chemical tracers disseminate quickly in the rock matrix and flush from the proppant pack, significantly reducing the effective monitoring window and further increasing the uncertainty on residual tracer volume. Furthermore, the interpretation of chemical tracing test results is typically carried out at an offsite analytical lab, requiring a sample dissolution and a three-week or longer turnaround on average.

Liquid-based tracers, likewise, are limited to only chemical measurement techniques at a molecular detection level and are notorious for signaling “false positive” for various types of frac hits. To point, chemical tracers tend to percolate deeper in the often-microscopic natural fissures within the DFN of a typical stacked pay unconventional well, often erroneously alerting the completion team that all the fractures are communicating and drawing down production. In reality, proppant conductivity ensures that once pumping stops, production will flow only from the sand-filled fractures; the natural fissures will instantly seal with minimal interwell communication.

The often-prohibitive costs and limitations of chemical tracers drove the development of the new ultrahigh-resolution nanoparticle tracer for flow mapping. Integrated with digitally enabled intelligent completion diagnostics and multidisciplinary subject matter expertise, the smart tracer portfolio provides value beyond the response of pressure gauges and costly detection technologies in one easily deployed, affordable and verifiable package.

A breakthrough in bringing cost-effective nanotechnology to completions, the smart tracer portfolio is based on proprietary micron-size particles developed from low-cost and environmentally friendly materials. Fundamental to the development program was engineering fit-for-purpose and distinctly tagged, nonradioactive tracers that are compatible with both oil and water, effectively cutting the cost in half compared with chemical tracers.

Additionally, a specially designed portable analytical lab facilitates on-site sampling, extraction and interpretation in near real time, thereby avoiding the wait for lab test results. Requiring only a few gallons of flowback a day for sampling, the field analysis entails a proprietary process to separate the particles from the flow sample. The returned particles are placed in an analytical instrument that quickly produces the elemental composition and crystallinity results for subatomic analysis. The distinctive fingerprints are then detected on each of the recovered tracers to identify the stage-level production and direct frac hit data, and correlate the tracer recovery over an extended time frame.

As demonstrated in deployments in the Eagle Ford and the Permian Basin, the smart tracer and advanced diagnostics played crucial roles in helping operators re-evaluate their infill development spacing strategies.

An established operator in the South Texas Eagle Ford play deployed the technology as part of a zipper frac application on a five-well pad with 1,000-foot well spacing. Before the introduction of the smart tracer, stage-level flow profiling tests had relied on chemical tracers and a combination of premium production logging tools (PLT) and downhole fiber optics. 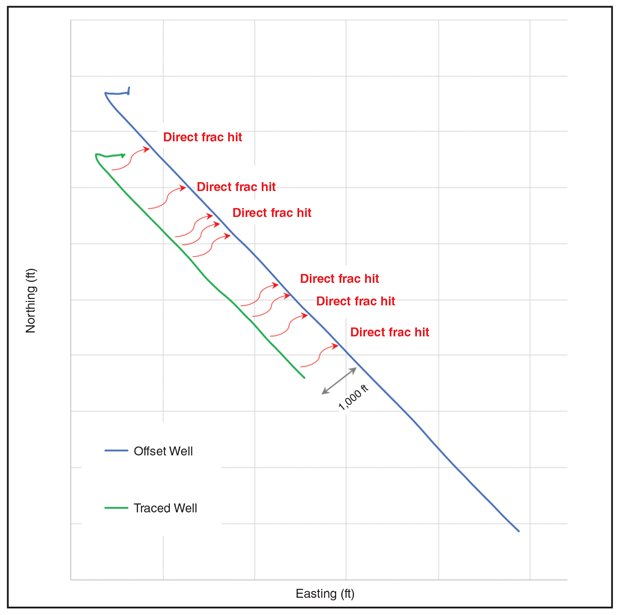 The distinctly tagged tracers were pumped unobtrusively in a 21-stage well after an analysis of the cross-linked gel frac fluid, water and 100-mesh sand to eliminate any background interference. Tracer recoveries from the four offset wells were analyzed over 20 days of daily flowback sampling.

The recovery analysis showed extensive direct frac hits on several stages of two of the offset wells, indicating the interwell spacing was too narrow and sacrificing production (Figure 2). Furthermore, the smart tracer recovery analysis showed a heel-dominated flow profile for the final nine stages, while two nonproducing frac stages were detected at the toe section. Seven stages exhibited strong production rates, while another three were shown to be underperforming. 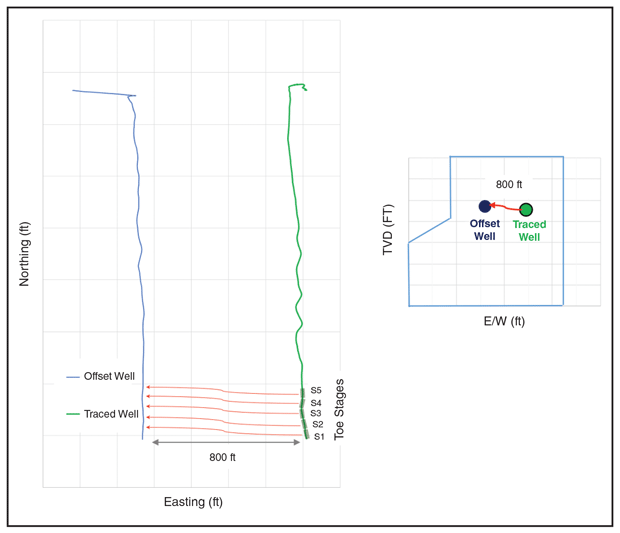 Elsewhere, surprising results from a tracer application for an operator in the New Mexico portion of the Delaware Basin could prompt a re-evaluation of both vertical and horizontal well placement strategies. The smart tracer was deployed on one well with a combined five toe stages and 800-foot horizontal spacing early in the field development stage as part of an extensive investigation to determine optimum spacing. The smart tracer was first pumped along with chemical tracers and permanent downhole fiber optics. Chemical-based tracers were shown to deliver insufficiently low frequency, while fiber damage related to the wireline plug-and-perf operations compromised the ability to obtain downhole measurements with the fiber optic cable.

Overall, the smart tracer recovery analysis from the initial well suggested production could be negatively impacted, as many stages exhibit direct frac hits.

TALGAT SHOKANOV is chief executive officer of QuantumPro Inc., which has developed FloTrac™ ultrahigh-resolution nanoparticle tracers and integrated digital completion diagnostic technologies. He founded the company in 2017, following a 15-year career at Schlumberger, where he held a variety of international and technology development assignments, including spearheading Schlumberger’s cuttings re-injection via hydraulic fracturing business. Shokanov holds B.S. and M.S. degrees in petroleum engineering from Satbayev University.

JOHN OLIVER is a board member and advisor to QuantumPro Inc. He has more than 40 years of industry experience, including several senior executive positions with M-I SWACO, a Schlumberger company. He managed all South American business unit segments and served as global marketing manager. Oliver then led Prince Energy, a division of Prince International, from which he retired in July 2018. He holds a B.S. in biochemistry from the University of St. Andrews.

ADILKHAN K. SHOKANOV is a professor and head of the Nanotechnology and Innovation Lab at Abai University in Kazakhstan. A world-renowned expert in nuclear gamma-resonance spectroscopy and nanomaterials, Shokanov holds a number of patents and has authored papers, books, monographs and educational courses in nuclear physics, Mossbauer spectroscopy, subatomic measurements and nanotechnology. Shokanov holds a Ph.D. in physics from Karaganda State University.