AUSTIN, TX.–Operators and service firms are acutely aware that one of the key challenges of horizontal pad well architectures is avoiding interwell interference between parent wells and newly drilled and fractured child wells during infill development. Parent wells are often the initial wells drilled to hold acreage by production. More importantly, they are the only wells on a lease that are drilled, completed and produced under virgin reservoir conditions.

Once field development starts, pad or infill wells are placed near the parent well. These child wells are drilled, completed and produced under reservoir conditions that have been altered by the parent well’s production.

Reservoir rocks form a geomechanical system that responds to both pressure and stress changes. Since reservoir pressures and stresses are coupled, changes in one can affect others. For example, long-term production from a hydraulically fractured well reduces pore pressure around the well, which changes the stresses.

Microseismic, tracer, pressure data and other field evidence indicate that protection refracs indeed can protect parent wells from frac hits and help improve production from both parent and child wells. Field data also show that parts of parent wells that are not refractured effectively can act as attractors for child well fractures. Moreover, protection refracs can help reduce the number of wells on a pad and increase net present value.

The focus of a University of Texas at Austin research project was to use a fully coupled 3-D poroelastic model to capture the effect of parent well depletion and reveal the reasons for child wells’ underperformance. The poroelastic simulation framework helps provide a mechanistic understanding of the behavior of the geomechanical changes occurring in the system during parent well production.

Specifically, reservoir-scale geomechanics software was used to model the depletion of the parent well reservoir region and calculate its impact on pressure, total stress and effective stress. Refracturing simulations of the parent well were conducted to showcase the importance of good refracturing operations in reducing the probability of frac hits from child wells. The software’s poroelastic capabilities helped in analyzing reservoir stress changes induced by depletion and refracturing. These stress changes explain observed frac hits from child wells.

A symmetric sector grid was used in the 3-D reservoir-scale poroelastic simulator to model production from the parent well, with identical and equally spaced fractures along the lateral creating a symmetric system of multiple fractures. Half a fracture in the length dimension was modeled assuming a vertical plane of symmetry along the parent well’s axis. Appropriate symmetric boundary conditions were applied on the simulation mesh. The length of the mesh in the direction perpendicular to the fracture is equivalent to actual fracture spacing in the parent well. Vertical layer heterogeneity was entered into the model using values from upscaled field petrophysical data.

A higher-permeability region was assumed to exist ahead of the propped fractures in the parent well, suggesting the presence of induced unpropped (IU) fractures created during fracture stimulation. The propped part of the fracture was modeled as an infinite conductivity fracture and simulated as an internal boundary with two surfaces, whereas IU fracture regions were described as part of reservoir mesh with higher permeability. The propagated fracture region, including both propped and IU fractures–also known as the stimulated reservoir volume (SRV)–was initialized with a higher pressure and water saturation to include the impact of fracturing fluids leaking off.

The simulations calculated the full stress tensor in the entire domain. Figure 2 shows the total stress in the direction along the well. Before depletion started, the stress adjacent to the fracture was high because the fracture’s propped opening compressed the surrounding rock, thereby increasing stress. The layer heterogeneity in the initial stress condition also was accounted for.

Reservoir depletion changes reservoir stresses. After depletion, the stress along the parent-well plane decreased. The stress in the region between the parent and child wells also decreased. Comparing Figures 1 and 2, it is evident that the depletion-induced decrease in stress is observed farther away from the parent well than the decrease in pore pressure.

This has two primary effects. First, fractures created in depleted regions of the reservoir will not produce as much as the parent well. This worsens the child well’s performance and decreases EUR. Second, child well fractures do not stimulate parts of the opposite side of the parent well that they were designed to. In order to access this unstimulated reservoir rock, new wells may have to be drilled, which drives up the cost of producing the reserves.

Parent well stimulation designs should be modified so that the spatial extent of depletion is reduced away from the well. The child well stimulation design also should be modified to create child well fractures in the reservoir’s undepleted parts. For a defined well spacing, increasing the number of clusters per stage can create more and shorter fractures along the well to help accomplish this objective without increasing treatment cost.

One known problem of having multiple clusters in a stage is that all clusters may not contribute to production. This can be improved by using limited-entry techniques during perforation. Another option to activate multiple clusters is using far-field diverters to prevent the creation of a single dominant fracture in a stage.

If the parent well already has been stimulated and has been on production for some time, the operator can try to modify reservoir conditions to increase stresses near the parent well to prevent attracting fractures from the child well to the depleted reservoir region. As noted, one way to accomplish that is refracturing the parent well, which increases stresses in the vicinity of the parent well fracture because of stress shadow induced by the extended fracture.

Impact of Parent Well Refracturing on Reservoir Pressure and Stresses 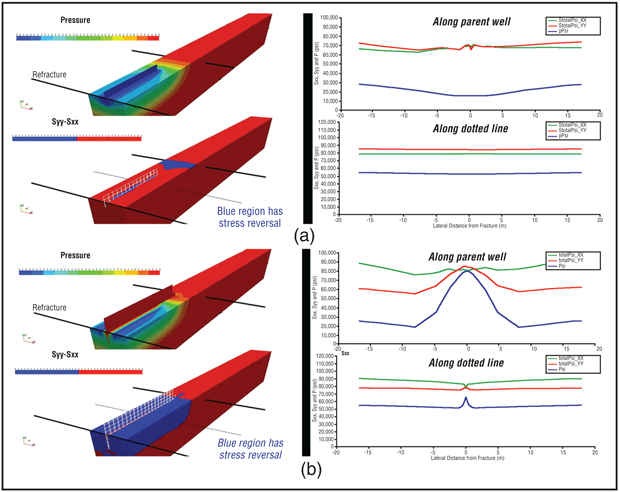 During refracturing, injected fluid leaks off and increases pressure in the region around the parent well fracture. Fracture opening and propagation also increase the stresses around the fracture.

This increase in stresses and pressures also is observed in the region between parent and child wells, suggesting that the fracture that propagates from the child may be restricted in growth toward the parent well because of altered stress magnitudes and principal directions.

Based on these findings, operators can better understand reservoir-scale stress changes during depletion from existing wells, and appropriate strategies for parent-child wells can be designed to maximize the effectiveness of infill stimulations.

Ripudaman Manchanda is a research associate at the University of Texas at Austin. His focus is on developing reservoir-scale hydraulic fracturing models to predict field observations related to the geomechanics of unconventional reservoirs. He has provided consulting support to several oil and gas companies for developing completion strategies for unconventional assets, including optimizing well placement, well spacing, fracture spacing, fracture sequencing, refracturing, fluid diversion, parent-child interference analysis, infill well fracturing, and fracture design. Manchanda has a B.S. in chemical engineering from the Indian Institute of Technology, and an M.S. and a Ph.D. in petroleum engineering from the University of Texas at Austin.

Prateek Bhardwaj is a reservoir engineer with ExxonMobil, based in India. Previously, Bhardwaj worked as a research engineering scientist at the Center for Petroleum and Geosystems Engineering at The University of Texas at Austin. His interests include reservoir simulation, geomechanics, injection well performance and hydraulic fracturing. Bhardwaj holds a B.S. in petroleum engineering from the Indian School of Mines and an M.S. in petroleum engineering from The University of Texas at Austin.

Jongsoo Hwang is a post-doctoral fellow in the Center for Petroleum and Geosystems Engineering at The University of Texas at Austin. He has worked as a reservoir engineer at ConocoPhillips, and as a production engineer at Korea National Oil Corporation. Hwang’s research interests include reservoir geomechanics, fracturing, waterflooding design, formation damage analysis, gas condensate reservoirs and numerical simulations. He holds a B.S. in chemical engineering from Seoul National University and M.S. and Ph.D. degrees in petroleum engineering from the University of Texas at Austin.

Mukul M. Sharma holds the Tex Moncrief Chair in the Department of Petroleum and Geosystems Engineering at the University of Texas at Austin. His research interests include hydraulic fracturing, water management, formation damage and improved oil recovery. He is a member of the U.S. National Academy of Engineering and a former SPE distinguished lecturer. Sharma has been the recipient of the John Franklin Carll Award, the Lucas Gold Medal, the SPE Faculty Distinguished Achievement Award, the Lester C. Uren Award and the SPE Formation Evaluation Award. He holds a bachelor’s in chemical engineering from the Indian Institute of Technology and an M.S. and Ph.D. in chemical and petroleum engineering from the University of Southern California.