Primexx is a privately held independent focused exclusively on developing the Wolfcamp on its 42,000-net acre core position in Pecos County, Tx. The largely contiguous acreage is ideally situated for long-lateral development, and 80% of Primexx’s locations have lateral lengths greater than 7,500 feet. Per-well estimated ultimate recoveries in the Wolfcamp A (Upper and Lower), B and C benches across the company’s leasehold are on the order of 1.5 million barrels of oil equivalent (75% oil). The operator has installed more than 400 miles of water and gas gathering pipelines. Two water treatment facilities provide 80,000 bbl/d of recycled water, and compression stations deliver gas to high-pressure gas sales pipelines.

The Wolfcamp formation in the southern Delaware Basin requires higher frac pressures than in the central Midland Basin. Frac pressures are as high as 13,500 psi and average at least 10,500 psi throughout the pumping process. To control the pressure, Primexx uses frac stacks rated at 15,000 psi. Such high-pressure operations are demanding for the frac pump fleet, so it is important to keep enough pump horsepower operational to complete each stage. The most important efficiency goal is to optimize frac fleet horsepower.

Plug-and-perf is the most prevalent method for completing unconventional wells. It enables pinpoint perforations, zonal isolation, stage spacing adjustments during completion, and the ability to place 100-plus stages per lateral for high-density frac designs. However, traditional wireline tool deployment during plug-and-perf operations is inefficient and labor-intensive, requiring personnel working in the high-risk “red zone” to open and close the frac stack gate valve for each stage. Personnel also must work at height to install the wireline lubricator on top of the stack. Frac iron has to be depressurized, pressurized, and pressure tested at each stage. Depending on the surface tools used (latches, zipper manifolds, etc.), it generally takes an average of 20-45 minutes per stage to transition from wireline-to-frac/frac-to-wireline.

Placed between the frac head and wireline lubricator, the automated system minimizes the inefficiencies and risks inherent in traditional plug-and-perf processes. The entire system can be operated from a control cabin or remotely via an Internet connection. Hydraulic valve actuation is controlled with a computer inside the valve cabinet and by a laptop in the cabin. The quick-connect latch attaches the lubricator to the frac tree without having personnel working at height, and the integrated ball launcher eliminates the need to enter the red zone to drop balls.

The three-chamber valve provides the ability to equalize pressure between the lubricator and the well without operating the gate valve, letting wireline-conveyed perforating guns and frac plugs easily pass between the surface and wellbore. The flow iron is kept under pressure throughout the completion process to eliminate frac iron pressure testing as well as pressure cycling that is a contributing cause of leaks. By significantly reducing the need to operate the stack gate valves (in many cases operating only a few times per well during the entire job), well cost is reduced by lowering frac stack greasing requirements by 90% or more, minimizing stack valve damage and repairs, and eliminating gate valve failure occurrences by removing the need to shut in the well at each stage.

The dual valves within the three-chamber design provide two 15,000-psi barriers to control pressure. The valves operate in one direction and seal against wellbore pressure from below. An O-ring provides a low-pressure seal, and a metal-to-metal seal engages at higher pressures. The valve system is instrumented to provide pressure readings for each of the three chambers to verify proper operation and detect leaks.

The valves cannot be opened unless pressure is equalized above and below the valve within 5 psi, preventing accidental pressure releases. The valves also are designed so they cannot kink or sever the wireline passing through the chambers in the event they are closed on the wireline, eliminating the risk of a common unplanned event that can add significant time and cost to well completion.

Figures 1A and 1B illustrate the sequential operations of the multi-chamber valve mechanism while deploying balls and running wireline-conveyed perforating guns and frac plugs. The dual valves isolate the upper chamber, the load lock chamber (equalization chamber), and the lower chamber. When the lubricator is attached to the latch, the lubricator and upper chamber are at atmospheric pressure, and the two lower chambers are at well pressure. Then the upper chamber and lubricator are filled to equalize well pressure. At this point, the two valves are opened and wireline can be run to convey plugs and guns.

After perforating, the guns are retrieved and both flapper valves are closed. The lubricator and upper zone are bled down to atmospheric pressure, the lubricator is removed, and the ball can be dropped to rest atop the upper flapper. The ball is conveyed by lowering pressure in the load lock chamber to open the upper valve. After the ball has entered the load lock, the upper valve is closed to equalize the load lock to well pressure. The lower valve can then be opened to release the ball down hole. The load lock is dry during this sequence to avoid premature dissolving of dissolvable balls.

The quick-connect latch is fully automated and operated from the control center. At 22 inches in height, attaching the lubricator does not require personnel in a man-lift in the red zone and saves time by eliminating lubricator stabbing and winging. The valve provides a double barrier so that a night cap is not required for well control. The iris-style latch secures the lubricator with 360-degree contact and has redundant safety features, including the ability to test seals and a lock to safeguard against accidental detaching through human error or hydraulic pressure loss. An internal drain prevents water from spilling to the ground when the lubricator is depressured and detached.

To eliminate manual ball dropping in the red zone, the integrated ball launcher can be loaded with the required number of balls and operated remotely from the control cabin (the automated ball launcher is a relatively new development, and was not available for use on Primexx’s 34 Wolfcamp wells). The control center remotely operates up to four completion systems, with only two hydraulic lines to each system. Each completion system is operated via a laptop in the control center through a simple screen user interface.

Seeking to improve the efficiency of Wolfcamp stimulation treatments, Primexx first employed a quick-latch system to keep personnel from working at height in the red zone. While an improvement, this strategy did not eliminate having to open/close gate valves or pressure test frac iron for each stage. To maximize completion performance, Primexx decided to deploy the fully integrated automated system to compress stage-to-stage times, increase pumping hours per day and reduce total completion times. 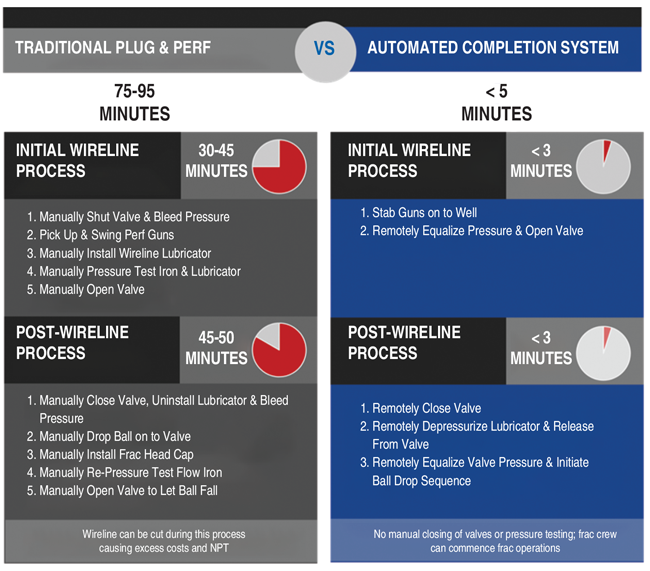 Rate of Completion for 34 Wolfcamp Wells 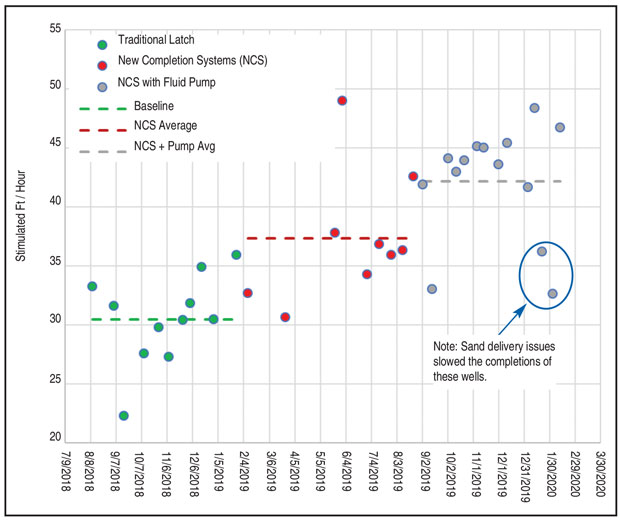 Figure 2 shows time required to perform wireline deployment, retrieval and ball drop procedures for a conventional latch system versus the automated system. Figure 3 shows the plug-and-perf completion efficiency (feet of lateral stimulated per hour) for the 34 Primexx Wolfcamp wells. All 34 wells were completed between August 2018 and February 2020.

The first step to deploying the system was to hold pre-job meetings for all onsite personnel to make them aware of procedures associated with the automated workflow. Even though the system requires fewer activities in the red zone, with the frac iron under constant pressure, the red zone area is larger than on a traditional plug-and-perf wellsite.

Once the field crew was trained, Primexx began using the automated system on Wolfcamp horizontals. The initial nine wells completed with zipper plug-and-perf fracs had lateral lengths averaging 10,000 feet with 50 stages per well. The average wireline transition time for these nine wells was slashed to three minutes, a 90% reduction. The average rate of completion was 37.3 feet stimulated per hour compared with 30.5 feet/hour for the previous 11 wells completed using zipper operations with a traditional latch.

With the automated system substantially compressing stage-to-stage times, Primexx was able to focus on other areas where additional time could be saved. The time required to fill and drain the lubricator was adding six minutes of stage-to-stage time. Primexx decided to add an automatic fluid pump to the completion system to reduce stage-to-stage time by an additional 4.5 minutes. The high-flow, low-pressure fluid pump remotely pre-fills the lubricator, eliminating the risk of burning wireline through adiabatic heating. The pump permits the completion system to equalize in seconds rather than minutes to reduce transition time to zero on multi-well zipper fracs and a matter of seconds on single well fracs.

The ability to quickly and seamlessly integrate the fluid pump demonstrates the adaptability of the automated system, which was engineered from the start as an Internet of Things platform to enable capabilities and tools to be added as needed to help lower completion time and cost. On the next 14 wells completed, the operator-driven addition of the fluid pump further improved the completion rate to 42.2 feet/hour, a 38% improvement over the original baseline. Maximum efficiency on these wells was 48.4 feet/hour, or 59% better than the baseline.

Primexx further reduced well costs by going to single-well operations. With pump efficiency approaching 18 hours a day, the operator eliminated the surface equipment and personnel costs associated with running multiwell zipper operations while achieving the same or better daily pump efficiency. Using this approach, Primexx was able to reduce total well completion time to 3.5 days per well with 90 fewer hours of pumps and trucks idling on location, and eliminating eight crew changes per well to save thousands of miles that would have otherwise been driven by crews.

A quick connect has since been developed to allow the system to be removed or added to a stack in 15 minutes. Since the system can go from well to well without the need for retrofit, the quick-connect allows the system to be quickly re-deployed on pad wells.

MICHAEL MAST is completions lead at Primexx Energy Group, where he focuses on completion optimization and data analytics. Before joining the company in 2018, Mast held various engineering roles at Halliburton Energy Services related to well stimulation and applications of completion technologies. He holds a B.S. in chemical engineering from Rose-Hulman Institute of Technology.

BRIAN WIESNER is president of surface systems at Oklahoma City-based SEF Energy, which is comprised of the Downing brand. Brian joined SEF in 2015 after 20 years in various technical, management, and international positions at Baker Hughes, FMC Technologies and GE Oil & Gas. Wiesner holds a B.S. in engineering from the Colorado School of Mines and an M.B.A. from both Cornell University and Queen’s University.

TIM MARVEL is vice president, business development and technology, at SEF Energy. He began his career at Baker Hughes, working in leadership roles in product management, engineering, technology, sales and business development. He subsequently served as managing director at Alcoa Oil & Gas, and as vice president and general manager for production optimization at Dover Energy Automation. Marvel holds a B.S. in mechanical engineering from Colorado School of Mines.