OSLO, NORWAY–As many as 2.2 million barrels a day of U.S. tight oil may be unleashed in the event of a supercycle–with oil prices remaining around or above $100 a barrel–driven by growing demand and continued supply tightness, Rystad Energy predicts.

According to Rystad, tight oil output in the core U.S. producing regions–the Permian, Eagle Ford, Niobrara, Bakken and Anadarko–in the fourth quarter of 2021 was around 7.7 MMbbl/d, continuing an upward trend but short of the pre-pandemic levels. Production in these regions is expected to surpass the 2019 high of 8.1 MMbbl/d by the second quarter and expand further if a supercycle materializes.

If oil prices remain around $100 a barrel, total production from these core regions will hit 9.9 MMbbl/d by the fourth quarter of 2023, Rystad estimates, marking a 2.2 MMbbl/d surge from the same quarter in 2021.

High oil prices are encouraging operators to increase production as supply from sources outside the United States remains tight, the firm states. Global Covid-19 concerns are waning and countries are removing or relaxing restrictions, causing a surge in demand for oil that the current supply will struggle to meet. In addition, geopolitical uncertainty in major exporting countries is worsening, threatening to disrupt trade flows amid already limited availability.

Total unconventional output–including oil, gas and natural gas liquids–from these core U.S. oil regions already has returned to pre-Covid-19 levels, totaling around 15.6 million barrels of oil equivalent a day in the fourth quarter of 2021. Total output is expected to keep climbing and reach an all-time high of more than 16 MMboe by the end of March, Rystad indicates.

“Although high prices would in theory trigger a burst in tight oil production, acute supply chain bottlenecks, a lag between price signals and its impact on production, and winter-weather-related disruptions will slow growth,” acknowledges Artem Abramov, Rystad Energy’s head of shale research. “Added to this are expectations that spot sand prices will rise to a $50-$70 per ton range, a level unheard of in the industry’s modern history, which will hit operators’ wallets.”

As it considers different scenarios, Rystad says a price range between $70 and $100 a barrel will lead to a significant upsurge in output in the fourth quarter, while a prolonged run of prices at $90-$100 a barrel will result in a further increase to the already recovering rig activity from the second quarter of 2022. In a $40 scenario, production will return to 2021 levels by 2024.

According to Rystad, in a $100 a barrel scenario, a gradual deployment of additional rigs will materialize from the second quarter, driven by both private operators and public independent producers. A fundamental shift in the operational philosophy of public exploration, drilling and production companies is emerging, with many responding to a global call on tight oil growth. Recent communications from ExxonMobil and Chevron on their ambitious Permian growth plans reaffirms this trend, the firm notes.

It goes on to indicate it detects a marked change happening in the Permian and some other basins, with industry sentiment becoming buoyant again. Various supply chain bottlenecks may delay the activity uptick, the firm allows, but they will not act as a complete showstopper because the industry repeatedly has demonstrated an ability to resolve all such bottlenecks with time. 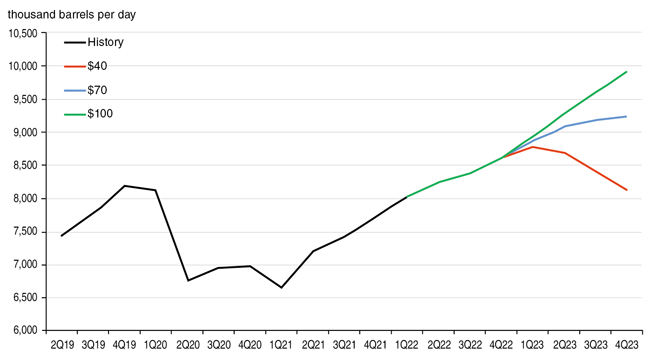 According to Rystad, these projections cover unconventional activity in core tight oil regions of all the Lower 48 states, excluding the Gulf of Mexico. For the rest of the Lower 48 conventional production and condensate in shale gas regions, excluding the Gulf of Mexico, oil output has stabilized in the 1.7 MMbbl/d-1.8 MMbbl/d range and even can recover toward 1.9 MMbbl/d during the next four years in a favorable price environment amid an increase in infill drilling in mature fields and a robust condensate production outlook in wet and liquids-rich parts of select gas basins. Against this backdrop, the pre-Covid-19 Lower 48 oil production peak of 10.4 MMbbl/d will be within reach already by late-2022 or early-2023.

In a $70 scenario, supply from the lower 48 states is expected to trend toward 12 MMbbl/d by late-2025, Rystad calculates, while a sustained $100 environment will allow U.S. onshore oil volumes to grow to 13.5 MMbbl/d during the next four years.