“Record production declines combined with rebounding demand, led by a recovery in liquefied natural gas exports, could create the tightest gas market of the past decade,” the report declares. “2021 Henry Hub prices have rallied 10% in the third quarter on tighter inventories, although we see further upside from here.”

In fact, Morgan Stanley says lower-48 gas storage could see stronger demand pull this winter than during the record-setting “polar vortex” winter of 2013-14, when some 3 trillion cubic feet of gas was withdrawn from inventory.

Falling production from the sharp reductions in exploration, drilling and production spending in 2020, along with a continuing recovery on the demand side, are setting up a scenario in which “winter storage draws potentially eclipse those of the 2013-14 polar vortex, and with a growing shortfall through the 2021 summer months.”

For perspective, data from the U.S. Energy Information Administration shows that the 2013-14 winter heating season began with a robust 3.8 trillion cubic feet of working gas inventory (on par with storage heading into this winter, which stood at 3.8 Tcf in mid-October), but average consumption of 91 billion cubic feet a day–including three consecutive months with 10-year record storage withdrawals–reduced inventories to below 1 Tcf by the end of March for the first time since 2003. Henry Hub spot prices soared to as high as $8.00/MMBtu and averaged over $4.00/MMBtu from November to March.

Looking at market dynamics heading into winter 2020-21, Morgan Stanley forecasts Henry Hub prices reaching as high as $5/MMBtu with cold weather and full-year 2021 prices averaging $3.25/MMBtu. “To address the impending supply-demand imbalance, we see the need for materially higher 2021 prices to incentivize much-needed investment in additional supply and gas-to-coal switching,” the report argues. “We are updating our gas balance and increasing our Henry Hub forecast for 2021 from $3.05 to $3.25/MMBtu, implying 13% upside from the current strip of $2.87.”

Total U.S. gas production is set to post a record 6 Bcf/d decline this year, according to the analysts. Noting that growth in “free” gas from oil production (associated gas) in onshore unconventional tight oil plays has been a key overhang for Henry Hub prices in recent years, Morgan Stanley points out that operators have slashed 2020 capital spending by roughly 50% below their 2019 budgets in response to low oil prices.

“Declines are not isolated to the oil basins; in the Haynesville Shale, rig counts have fallen from 50 to 35 year to date, with the Marcellus posting a similar 30% decline,” the analysts emphasize. “Weak spot prices this summer, balance sheet stress, and minimal access to external capital have left gas producers with production declines of their own, and limited ability to proactively increase capital expenditures in response to the upcoming market tightness.”

Despite declining supply, demand appears poised for another year of strong gains, according to the report. The dramatic fall-off in economic activity related to the COVID-19 lockdown measures implemented last spring created a global oversupply of LNG this past summer, leading to substantial cancellations of scheduled U.S. export cargoes to all parts of the globe. Peaking at 45 cargo cancellations in July, LNG feed gas demand fell to below 3 Bcf/d, well below U.S. capacity of ~9.5 Bcf/d.

“Heading into the winter, we anticipate negligible cargo cancellations as the global LNG market shifts back into balance,” the report reads. “After averaging about 6 Bcf/d in September, we expect LNG feed gas to stabilize at 9 Bcf/d-10 Bcf/d during the fourth quarter.”

Skewed To The Upside

In total, Morgan Stanley forecasts winter 2020-21 demand growth of 5 Bcf/d-6 Bcf/d year-over-year assuming normal weather. The combination of falling supply and growing demand will result in tight inventories. With start-of-winter storage volumes estimated to be 3.9 Tcf at the end October, roughly in line with the five-year normal, the report concludes that the combination of constrained supply (down 6.5 Bcf/d year on year) and increasing demand (up 5.5 Bcf/d year on year, driven by strong LNG exports) will invariably lead to one of the largest winter draws in a decade.

Weather remains a variable, as always, but “risks are skewed to the upside,” the report points out, adding that large inventory withdrawals can be expected even under normal weather conditions with historic average temperature patterns. Figure 1 shows Morgan Stanley’s estimated storage levels through 2021. 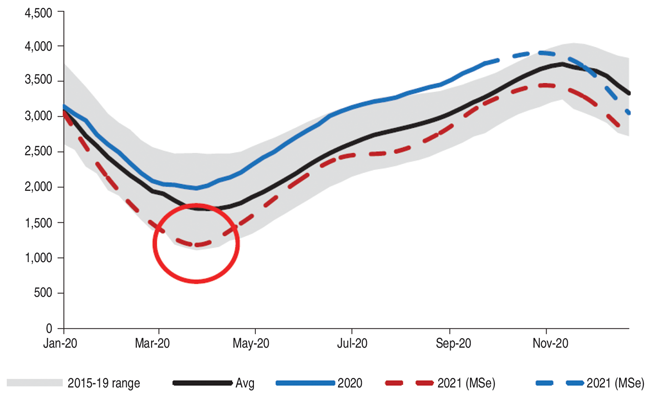 “Assuming normal 10-year weather, we expect tight end-March inventories of ~1.2 Tcf (35% below the five-year normal of 1.8 Tcf), with a mounting deficit thereafter,” the analysts write. “Colder-than-normal weather could lead to the lowest U.S. gas inventory levels on record, and a material price rally to $5/MMBtu, or higher, and average in the mid-$4/MMBtu range for full-year 2021.”

Drilling deeper into the forecast, Morgan Stanley lays out three alternate scenarios for gas demand and pricing the winter: a base case, a bear case and a bull case. The base case projects a full-year average price of $3.25/MMBtu in 2021 and assumes a repeat of the 10-year average of 3,709 gas weighted heating degree days (GWHDDs) from Nov. 1 through March 30. That would result in tight end-of-March inventories of 1.2 Tcf, which would be 35% below the five-year average and represent a net wintertime inventory draw of some 2.7 Tcf.

In the full-year $4.50/MMBtu average price bull case, November-to-March GWHDDs are one standard deviation colder than the 10-year normal, or 4,173. Assuming no additional supply response or gas-to-coal switching, this would shrink end-of-March inventories to just over 200 Bcf, representing a net wintertime inventory draw of 3.7 Tcf. “Higher prices would likely lead to additional gas-to-coal switching (relative to our base case) before these extreme low levels were reached,” the Morgan Stanley analysts note. “An average winter price of $5.00/MMBtu and full-year average of $4.50 would be needed to refill inventories.”

The bear case is premised on temperatures averaging one standard deviation warmer than the 10-year normal, resulting in 3,245 GWHDDs over the winter heating season. It would leave end-of-March inventories at 2,093 Bcf, 15% above the five-year normal, with a net inventory draw of only 1.8 Tcf. The call on additional dry gas supply would be more muted in this case, Morgan Stanley observes, with full-year 2021 prices averaging $2.50/MMBtu.

In a separate report, Morgan Stanley says the rapidly rebalancing U.S. gas market and the shift higher in long-term strip prices are leading to a “tactically more constructive” view of natural gas producing companies, particularly mid-cap Marcellus and Utica shale independents. “As tailwinds build for potentially the tightest winter gas market of the past decade, near-term risk for equities now appears skewed to the upside,” the report concludes.