HOUSTON–As the third quarter begins, the markets are being roiled by a litany of factors–the aftermath of hurricane devastation in Florida, a stock market in retreat, an increasingly gloomy economic outlook, the sabotage of Russian natural gas pipeline infrastructure offshore Europe, the ongoing war in Ukraine, and of course, historic levels of inflation.

To the latter point, it’s astounding how quickly things have changed. Just a year ago, the Federal Open Market Committee (FOMC) gave a picturesque view of the economy. Any inflation was “transitory” and would likely fall to 2% in 2022. The federal funds rate would remain lower longer with little chance of a recession.

At that same time, we had a different point of view. Given the weak U.S. dollar, cheap money and the U.S. Federal Reserve’s oversized balance sheet, it was inevitable that inflation would occur. And it most definitely has, with U.S. inflation at the highest levels since the early 1980s.

Now, with the inflation rate above 8.0%, the FOMC is playing catchup with one of the fastest Fed funds rate increases on record. On Sept. 21, the Fed raised its interest rate by 75 basis points for the third time this year to a 3.00-3.25% range and signaled more large increases to come.

This rapid increase in interest rates certainly will have consequences. The U.S. dollar currency index (DXY) has continued to strengthen. A stronger U.S. dollar makes dollar-denominated commodities such as U.S. benchmark WTI crude oil relatively more expensive for holders of other currencies.

That being said, U.S. corporations not actively hedging their foreign currency exposure will take a hit in earnings. After continued periods of steady decline in the dollar, this recent interest rate shock is being felt around the world. This new market will test companies’ assumptions about the forex portfolio, another area that equity and debt investors will need to monitor.

With the focus shifted to the FOMC, crude oil demand destruction has taken center stage. The inversion of the yield curve (two-year treasury trading higher than 10-year) is a strong indicator of a looming recession. The spread was at -0.41% on Sept. 22, compared with +1.07% the same time last year (this is lower than the long-term average of 0.92%).

Economic growth has slowed more than estimated and the equity markets continue to struggle, with the broader S&P index down 24% year to date. Figure 1 shows the implied policy rate, which currently peaks in May 2023 at slightly over 4.6%. The elevated rates are expected to persist well into 2025. Given the FOMC’s guidance for higher rates over the next four years, we are barely in the second inning of this game. 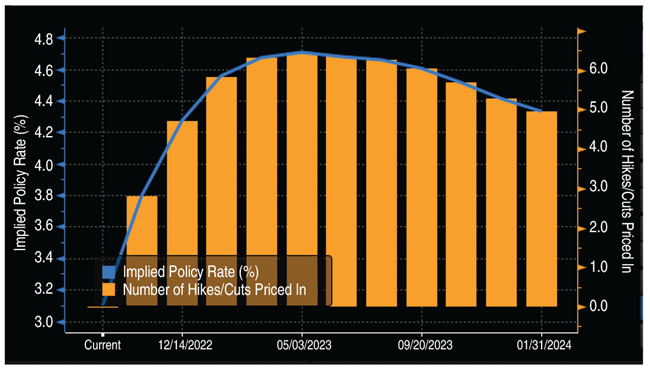 Although demand destruction is real, the larger issues reside on the supply side. Fundamentally, the energy complex has been under attack. Between politicians wagging fingers and blaming chief executive officers for higher oil and gas prices and new environmental, social and governance initiatives impeding new fossil fuel development, U.S. crude production is waning and likely will be slow to respond to any type of supply shortage.

NOTE: Peak inflation estimates are contingent on the level of DXY and have an estimated three-six-month lag time. Current estimated peak inflation of ~20% should filter through in early 2023.
Source: Opportune LLP analytics

At the end of the day, this anti-fossil-fuel environment will exacerbate the diminishing crude supply and continue to promote higher energy prices. Although the stronger U.S. dollar has started to impact the price of crude, I believe we are closer to the bottom than the top. With crude prices trading as low as $78 a barrel in late September, the market is primed for a very bullish run. Tight supply, coupled with heightened geopolitical tensions concerning the Russia-Ukraine war, likely will drive WTI prices to new highs around $180/bbl.

The scariest part is, I don’t believe we have seen peak inflation. By my calculation, the current 8.5% inflation rate will at least double. The dollar index has started to go parabolic. With a target DXY of 120, we should ultimately peak well above 20%. The highest prices are still on the way. With winter approaching and energy costs expected to double, keeping warm could be an expensive proposition.

Winter is coming in both a literal and figurative sense.

RYAN DUSEK is a director in the Commodity Risk Advisory Group at Opportune LLP. His industry experience includes commodity trading, risk management, supply chain optimization and derivative valuation. He is an expert in developing financial models to quantify complex issues and deliver real-world solutions. He has extensive experience in the pricing, hedging and portfolio management of the natural gas markets, and has led all aspects of commercial deal structuring and pricing for wholesale natural gas trading and origination. Dusek has more than 15 years of experience in the energy industry. He holds an MBA in finance from the University of Texas at San Antonio.