HOUSTON–Perforating operations long have been among the most dangerous activities performed on a well site. Accidental detonations while preparing for a perforating run, during arming of perforating guns or in the aftermath of a misrun have resulted in numerous well site accidents, and in some cases fatalities.

Selective perforating systems traditionally have been armed with resistorized detonators and through a mechanical or addressable switch. Although safer than nonresistorized electric detonators, this style of detonator can be susceptible to inadvertent detonation from stray current, voltage and/or radio frequency (RF) sources. As a result, well site surface operations typically are suspended, and radio silence is common while perforating guns are being armed to minimize the chance of an accidental detonation.

Because arming traditional perforating guns can take considerable time, the invisible lost time associated with this operation can be costly since no other parallel well-site operations can be conducted. The same is true once guns return to the surface. Guns are treated as live devices until initiation can be confirmed. Safe disassembly is conducted in reverse order of the arming sequence, again halting other well site activities until the sequence is completed.

As well site operations become fast paced and grow in service intensity, solutions are required that allow for efficient and safe gun arming that do not disrupt other well site activities. Operators are pressing service companies for improved processes that reduce downtime and allow parallel operations to be completed at the well site.

At the same time, reducing the time required to arm each perforating gun is becoming more advantageous. With the proliferation of cell phones and other communication devices, maintaining strict radio silence at the well site is proving to be difficult, leading to an even greater safety risk. Well site perforating activities are at a critical safety juncture because traditional perforating practices are not aligned with current desires and procedures.

Regulations and safety procedures for perforating guns are governed by the American Petroleum Institute and the Pipeline and Hazardous Materials Safety Administration. API details safety standards through RP 67, Recommended Practice for Oilfield Explosives, while PHMSA regulates transportation and storage of “jet perforating guns (JPG)” to well sites through Hazard Materials Regulations (HMR); 49 CFR. Both sets of guidelines have seen modifications that impact both operators and service companies in regard to safely providing perforating products and services.

Initially published in 1994, API RP 67 was revised in 2007 and again in 2015. A fourth edition awaits approval that will introduce strict standards for safely arming detonators at certain distances away from RF signals. Three groups of detonators are called out in the fourth edition, as detailed by Table 1.

Classification of Detonators According to RP-67 4th Edition

Group 3 detonators function by running high voltage (>500 volts) through exploding foil initiators or exploding bridge wire technology. These types of detonators are common in military applications for controlling the firing of missiles, torpedoes and other precision-guided ordnance. Their high cost makes them difficult to adopt for oil field operations, and their complexity means they tend to fail at a higher rate, which has an overall negative impact on service quality.

As a result, many service providers strive to have their detonators or select fire systems fit into the Group 2 “safe” category. These require much smaller RF exclusion zones and are seemingly made safe by including an electronic switch in the design before the resistorized detonator that allows them to be armed at a gun-loading location and transported to the well site.

As the API finalizes the revisions to RP 67 that will be documented in the fourth edition, PHMSA has issued updated transportation guidelines through HMR 49; CFR.

Loaded perforating guns are considered explosive devices, and any company that transports them to and from a gun-loading location to a well site must obtain approval from PHMSA. Late last year, PHMSA updated published guidelines to restrict shipping JPGs with the detonators already installed, as was common practice in wireline operations.

Under the new guidelines, each JPG must have an interrupt system integral to the detonator system that is verified by an independent third party. Responsibility for obtaining verification typically falls on the wireline company.

Any company transporting JPGs that have a prewired detonator installed without a third-party approved interrupt system is no longer in compliance with PHMSA’s updated regulations. PHMSA will not approve any JPG with a detonator without a test report from an approved laboratory, certifying the interrupt system.

It is important to note that service companies that already have approval from PHMSA to transport armed perforating guns are required to surrender that approval, or test their interrupt systems and submit data to PHMSA. It no longer is acceptable to ship loaded perforating guns with a detonator attached.

However, PHMSA is not yet pushing for compliance with the new requirements, and instead has chosen (at least in the near term) to let service providers police themselves and submit for new testing and certification in good faith.

New perforating technology has been introduced that delivers improvements in both well site safety and efficiency. The system removes the risks associated with the arming process by providing an addressable and RF-safe system that is immune to high voltage and current levels. The firing system is built on a low-voltage, digital communication platform, and has been proven to communicate successfully and initiate on command during more than 1.5 million initiations without incident.

This digital technology also allows all system components to be verified prior to running down hole, including the addressable switch, RF-safe detonator, and RF-safe ignitor.

The new system uses industry’s first and only intrinsically safe detonator, making it the preferred choice for operating in hazardous areas such as an oil and gas well site. The wire-free, plug-and-go detonator design is easy to install at the well site, requires no on-site wiring, and allows the system to be tested fully before it is run down hole (Figure 1).

Because the detonator cannot be energized by AC or DC electrical power, battery, induced static electricity, lightning strike to the lubricator, or an accidental Megger test of the wireline cable, accidents have been avoided. The detonator itself is shipped separately from the system’s gun modules, thereby eliminating risks associated with shipping armed JPGs, which is central to PHMSA’s changes.

To add another layer of complexity, RF-safe distances are detailed by the Institute of Makers of Explosives in SLP 20–Safety Guide for the Prevention of Radio Frequency Radiation Hazards in the Use of Commercial Electric Detonators (Blasting Caps).

SLP 20 contains a representative list of transmitter types (ranging from standard AM transmitters to television, CB radio and cell phones) with associated safe distances from more than 3,000 feet for AM transmitters down to five feet for cellular signals (Table 2). The majority of service-intensive well site operations take place within 100 feet of the wellhead, making it desirable to arm, test and service perforating guns within this radius (Figure 2).

Because of the detonator’s intrinsically safe design, the minimum safe distance requirement is virtually eliminated. The design also enables parallel well operations without depth restrictions or radio silence. Normal well site operations can continue while the gun string is lowered into and raised from the well. Surface explosive handling is minimized, and arming can be conducted at any time without interrupting other well site activities. This reduces surface downtime and greatly limits risks to the environment or to personnel handling the system.

In field operations, this new, intrinsically safe detonator technology has delivered a dramatic impact on the reliability and safety performance of perforating operations. Before the system was introduced, companies using resistorized detonators experienced system efficiencies of 98.0 percent, meaning that wireline misruns or misfires occurred at a failure rate of 2.0 percent. 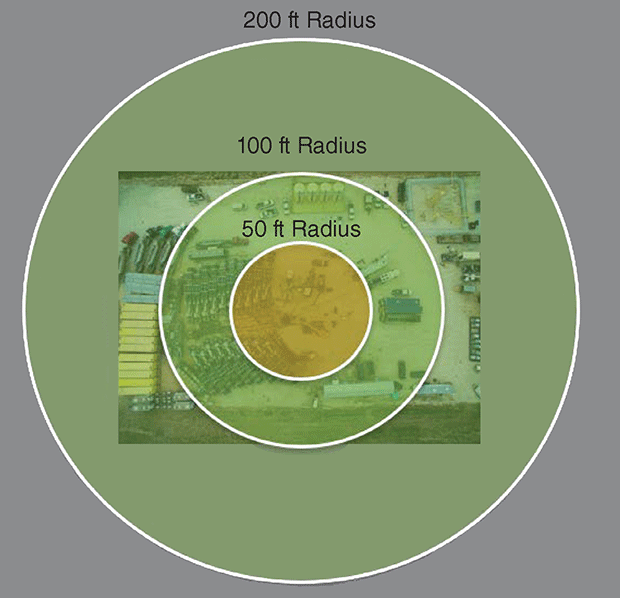 After launch, the new system quickly demonstrated efficiency that reached 99.41 percent, or one failure per 420 runs. With continued refinement to system components, manufacturing and assembly processes, along with well site operating procedures, the efficiency rate now exceeds 99.9 percent and continues to increase.

In addition, each perforation stage run with the system reduces completion time by an average of 32 minutes, compared with conventional systems. Surface-level transitions from gun to gun and well to well drive this time savings, resulting in fewer days on location and significant cost savings to operators.

Classified as a Group 2 “safe” detonator, the system’s ability to conduct PHMSA-, SPL 20- and API RP 67-compliant operations, shipping and surface testing greatly reduces the risk of an unintended detonation at any stage of explosive handling or transport. The intrinsically safe detonator design minimizes the required safe zone at the well site during the arming process and in the post-run rig down.

Because the detonator and gun are shipped to the well site as separate units, the system complies with guidelines for transportation that are documented in the newly revised HMR; 49 CFR. With this system, technology advancements have delivered a perforating gun system that is easier to arm and test, safer to transport and handle, and more efficient to operate.

THILO SCHARF is product line director for DynaEnergetics’ new DynaStage™ factory-assembled, Performance-Assured™ perforating system for improved well site safety and efficiency. He joined DynaEnergetics in 2011 after an 11-year career at Schlumberger Oilfield Services. His main areas of interest are perforating technology, explosive safety and oil well completion methods/techniques. Scharf holds an engineering degree in applied physics and biomedical engineering from WHZ, Zwickau in Germany, and an M.S. in nondestructive testing from the Robert Gordon University in Scotland.