ODESSA, TX.–Exhibitors and attendees at this year’s Permian Basin International Oil Show will have at least one thing in common with PBIOS President Monnie Sparkman: staying power.

“Standing Tall” is the theme of this year’s edition of the biennial oil show, scheduled for Oct. 18-20 at the Ector County Coliseum and Fairgrounds in Odessa. Sparkman says show organizers selected the theme to remind the industry at large–as well as show volunteers and the Permian-area businesses they own and work at–to take courage as companies work to weather the downturn.

“This is nothing new,” he says. “We just need to keep on trucking, and before long, the industry will recover.”

The theme also underscores a commitment to working hard and planning ahead, both of which are major common denominators among industry veterans such as Sparkman. In fact, he points out that many of the show’s long-time exhibitors have managed prior downcycles and exemplify a commitment to stability and prudent management.

“I think more than half our vendors have been exhibiting for at least 10 shows. That is 20 years or longer. The industry has seen a lot of changes over the past two-three decades, and any company that has been around that long has learned how to succeed in both the good times and bad,” says Sparkman, president of Liberty Fishing & Rental Tools and Capitol Oil Well Service, both based in Odessa.

Like the Permian Basin itself, the PBIOS has been through its share of ups and downs over the years, but Sparkman points out that the show’s value to exhibitors and attendees alike is never greater than when industry business conditions are difficult.

“The show brings together those who are facing business and technical challenges in the field with those who have the solutions to optimize well operations and improve economic performance,” he says. “Attendees can get up to speed on the latest technologies and services, and it gives equipment and service providers exposure to potential customers from all sectors of the industry.”

As of mid-June, 97 percent of exhibit space was full and the remaining space was expected to fill quickly, Sparkman reported. “We have lost some exhibitors from past shows, partly because of consolidation in the service sector, but new exhibitors are taking their places and the show is approaching 100 percent exhibition capacity,” he updates. “There will be some new faces at the show along with many familiar ones.”

Held in even-numbered years, the PBIOS long has been known as a “working man’s oil show,” a title befitting home-grown Permian Basin companies and others who comprise the list of show participants. However, it also reflects the fact that business always has been conducted at the show. “One sale made during the show or from contacts made at the show can recoup the cost of exhibiting and then some,” Sparkman notes. 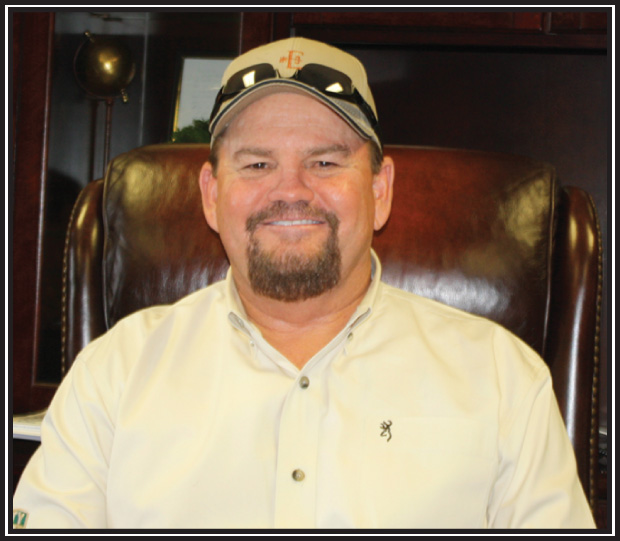 “When the recovery happens, it could happen pretty quickly. We want to be sure we are ready when the demand comes back.”

Sparkman’s industry roots extend back to the experiences of his father, Bobby Sparkman, and uncle, John Brown, Bobby’s brother-in-law. The two men worked for Penrod Drilling in Houma, La., when Brown opted to move to Odessa and start Liberty in 1958. B. Sparkman joined him in 1961. Along the way, Monnie was born in Henderson in East Texas, where relatives still live.

“At the time Uncle John started Liberty, they had two reverse units and one truck, and moved their own rigs and essentially did everything themselves,” Sparkman relates.

B. Sparkman was named vice president in 1967. After Brown’s passing in 1969, Sparkman bought his sister’s interest in the company in 1973. Monnie attended Odessa Permian High School and Odessa College, and then joined his father full time.

“I drove a truck for two years, operated a reverse unit for 15 years, and then ran fishing tools for another 13 years,” Sparkman recalls.

In 1999, he and his brother John bought out their father, who passed later that year. With Monnie serving as president and John as vice president, they continued to grow Liberty and launched Capitol Well Service in 2006.

Careful management enabled Liberty to hang on during the mid-1980s downturn, Sparkman recalls, but the most recent downturn includes its own set of challenges. He notes that the boom of the late 1970s and early ’80s lasted six-seven years, but the most recent uptrend lasted roughly twice that long, with some exceptions related to the global recession of 2008-09 and the onset of an extended period of sagging U.S. natural gas prices.

“The most recent boom lasted long enough that many people got into the business, or started or expanded businesses,” Sparkman says. “There are a lot more competitors now in most areas, and all of them are trying to get a piece of the same pie. The problem is that the pie is so much smaller at the moment than what it was a few years ago.”

The Permian Basin is weathering the storm better than most regions. In fact, Baker Hughes reported in late July that the Permian accounted for 36 percent of the total U.S. rig count. “Unconventional oil plays are driving that activity,” Sparkman relates. “Plays such as the Wolfcamp and Spraberry hold huge reserves and are proving economic to develop, relative to other unconventional reservoirs.”

Planning For The Upturn

Sooner or later, the downcycle will turn into an upcycle. The challenge for equipment and service providers is to navigate the bottom of the cycle while remaining prepared to capitalize on the upturn when it comes, Sparkman notes. “We have seen downturns before and every one of them had ended the same way: in an upturn,” he says. “The upturn is coming. We just have to keep our heads up and chip away until it gets here.”

For Sparkman, survival has always been about planning ahead, which his forebears did during the 1980s, and he and his staff continue to do today, he says.

“I had been anticipating what happened beginning in late 2014 for about five years beforehand,” he says from Liberty’s offices on U.S. 385 on the northern edge of Odessa. “I knew activity was going to slow at some point. It had to. The United States was producing more and more oil and natural gas. The gap between global oil supply and demand was getting wider, and I knew we were going to get to a downturn sooner or later. To be honest, I thought it would have hit about three years ago.”

Preparing for depressed activity levels included working to ensure that new equipment was paid for and that the company retained an ample supply of cash. Liberty employs 20 and Capitol about 15. Thus far, the company has been able to avoid layoffs.

“I have not had to lay off anybody and I am not planning on laying off anybody,” Sparkman says. “We are optimistic the industry already has made it through the worst of it.”

Despite the price decline, the costs of doing business have not fallen nearly as much as revenues, he points out. That is partly the result of large operators applying increasingly stringent API standards and adopting additional requirements initially applied to offshore drilling and production.

“We have blowout preventers that I have to recertify at a substantial cost that previously met requirements, and we are not getting any more for renting the BOPs than we were before the downturn. It takes renting a BOP every single day for months to recoup those dollars,” Sparkman says, noting that Capitol Oil Well Service had two of its four rigs running in mid-July.

Liberty also is in the process of purchasing five more BOPs to satisfy one major operator’s requirements, he says, and is awaiting an audit to ensure the company meets the specifications to continue working for the operator.

“Our fishing tool services business is still good, but so much concerning BOPs comes from the offshore environment,” Sparkman says. “The same BOP standards required in the Gulf of Mexico are being mandated now for onshore operations in West Texas, and it is completely unnecessary. I know some machine shop guys who are about to pull their hair out as they work to meet the new standards. Some regulations may be impossible for them to keep up with. Some equipment simply cannot be made to meet the new standards. It will mean buying brand new equipment.”

Still, the prospect of improving prices is helping as some operators that previously had drilled and cased Permian wells without completing them at least start considering ramping up activity to take advantage of lower hydraulic fracturing costs while they still can, Sparkman offers. That could translate into more business for Liberty for completions done with pipe, he adds.

“When the recovery happens, it could happen pretty quickly. We want to be sure we are ready when the demand comes back,” he says.

“I think the oil field is the final frontier where a guy can go out and learn something well, and start his own company,” Sparkman says. “To me, oil and gas represents one of the last sectors of true entrepreneurship. You can learn a trade and start your own business. When things are good, they are really good. The sky is the limit for a young person entering the business who is motivated, ambitious and talented.”

Exhibitor applications are still available on the PBIOS website at www.pboil­show.org. For information on exhibiting or attending the 2016 show, visit the website or call the PBIOS office at 432-367-1112.