This is the highest resource evaluation in the committee’s 54-year history, PGC points out, exceeding the previous high assessment from year-end 2016 by 557 trillion cubic feet. This also is the largest two-year increase in absolute resources between evaluations in the PGC’s history, the committee adds, saying the increase results from reassessments of shale gas resources in the Atlantic and Mid-Continent areas, and conventional and tight gas in the Mid-Continent and Rocky Mountain areas.

“This seventh consecutive record-high resource evaluation by the PGC confirms that the United States has an abundance of natural gas. These resources are present in various reservoirs both onshore and offshore,” says Alexei V. Milkov, professor of geology and geological engineering and director of the Potential Gas Agency at the Colorado School of Mines. PGA provides guidance and technical assistance to the PGC. 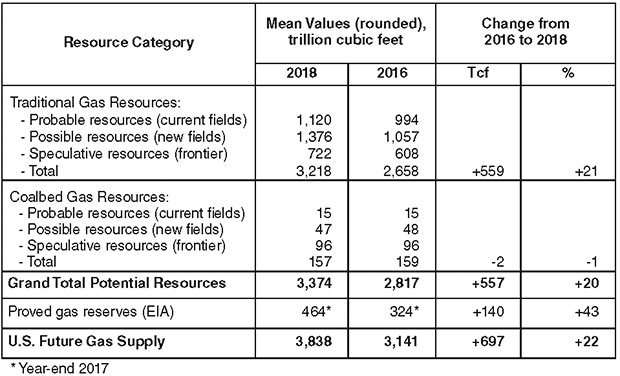 Gas resource assessments in Table 1 are reported as probable, possible and speculative. For each category, PGC says, a minimum, most likely and maximum volume is assessed in each of 90 onshore and offshore provinces in the lower-48 states and Alaska. The category and total mean values shown in Table 1 were computed by statistical aggregation of the minimum, most likely and maximum value distributions for each category and for all provinces combined, which PGC says allows for more direct comparison with assessments made by other organizations.

PGC notes that it assesses technically recoverable resources and does not consider a specific price or schedule for the discovery and production of natural gas. PGC’s estimates are in addition to the U.S. Energy Information Administration’s estimates of proved gas reserves.

When PGC’s assessments of technically recoverable resources are combined with EIA’s latest determination of proved reserves of 464 Tcf as of year-end 2017), PGC says the future U.S. gas supply stands at a record 3.838 Qcf, an increase of 697 Tcf (22%) over the previous evaluation.

“More drilling and continuous improvements in completion and stimulation technologies lead to better delineation and characterization of U.S. gas resources, especially in shale and tight reservoirs,” Milkov highlights. “The record gas resources assessed by the PGC, in addition to record reserves and production reported by EIA, display a picture of strong natural gas supply in the United States for many years to come.”

PGC reports potential resources at the national level as well as for seven geographical areas and 90 geological provinces.

The Atlantic region ranks as the country’s richest resource area with 41% of total U.S. traditional resources, PGC reports, followed by the Mid-Continent with 19%, the Gulf Coast (including the Gulf of Mexico) with 16% and Rocky Mountains with 16%. According to PGC, changes in the total assessment from year-end 2016 to year-end 2018 arose primarily from the evaluation of recent drilling, well-test and production data from those areas.

The largest volumetric gains (264 Tcf or 25%) were reported in the Atlantic area, PGC says. It says the major reason for the increase is new drilling and production results from Marcellus and Utica shale plays in the Appalachian Basin.

Mid-Continent assessments rose by 245 Tcf (66%), reflecting intensive developments of conventional, tight and shale reservoirs in the Permian Basin, PGC continues, pointing out that its evaluation accounts for additional zones and potential well locations associated with stacked pays developed in this area.

Gas resources in the Rocky Mountain area increased by 65 Tcf (15%). This resource growth reflects large revisions in the Williston and Denver basins, PGC says, including more rigorous accounting for gas associated with production of liquids.

PGC says the Gulf Coast area had a modest overall decrease of 22 Tcf (4%). The main reason, it reports, is downsizing of well types in the Eagle Ford Shale and a lack of resource additions to replace production from the Eagle Ford and the Haynesville plays.

Copies of the biennial Potential Supply of Natural Gas in the United States are on sale for $375 by the PGC at the Colorado School of Mines. For information contact Director Alexei Milkov at 303-273-3887 or amilkov@mines.edu.