BOULDER, CO.–A glut of crude oil supply has persisted and pushed crude prices down to their lowest levels since May 2003. After five straight years of increasing production, the market is eagerly awaiting signals of slowing and decreasing crude output. The fact is the decline is occurring already.

Genscape believes U.S. production hit a peak of slightly more than 9.6 million barrels a day in April 2015 and is now declining as a result of the significant reduction in drilling across all producing basins. U.S. oil production ended 2015 at 9.2 MMbbl/d, down 400,000 bbl/d from the April peak, and we expect it to continue declining through the remainder of 2016 and into 2017, bottoming at 7.8 MMbbl/d by the end of third quarter 2017. 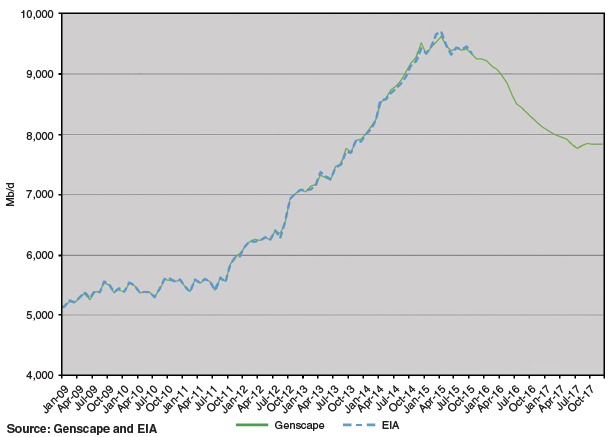 Figure 1 shows oil production from the U.S. Energy Information Administration and Genscape forecasting models since January 2009, with Genscape projections through October 2017. We anticipate production will begin climbing again near the end of 2017, but growth will depend on oil price levels. Assuming similar pricing to the current market environment, it would reach only 8.8 MMbbl/d by the latter half of 2020.

From the middle of December to the middle of February, the total U.S. rig count fell by 163, according to RigData. Genscape expects a continued slide in rig counts through August, with the 607 active rigs tallied in RigData’s mid-February count losing another 263 over the next six months to reach a low of 344 rigs in late summer. Once the rig cutting is complete, the lower-48 drilling market will have lost 84 percent of its active fleet compared with October 2014.

In the latest round of earnings calls, producers have suggested varying operational plans to weather the low-price environment. Some operators are relying on continued efficiency gains, cost reductions and high grading to their best acreage to keep drilling activity constant, while others are decreasing or ceasing drilling altogether to wait for higher prices. Others are deferring completions.

In a news release detailing its 2016 plans, Continental Resources confirmed its “intense focus on cash flow neutrality.” To meet this objective in the horizontal Bakken/Three Forks play, Continental said it planned to increase its drilled, but uncompleted (DUC) inventory of wells from 135 gross at year’s end 2015 to 195 gross DUCs at year’s end 2016. Further highlighting that strategy, the Continental release stated, “This high-quality DUC inventory represents a significant asset for the company as prices recover.”

Similar to Continental, an Anadarko Petroleum news release reported that the company had 120 DUC wells in the Wattenberg Field in the heart of the horizontal Niobrara play in the Denver-Julesburg Basin, and said, “It doesn’t appear we will utilize them all this year.”

Depending on the timeline of when this inventory of DUCs will be worked off, there is some risk to Genscape’s forecast, but we do not feel the DUCs will come into play until 2017 or even 2018. Our view is that with lower prices and less cash available to initiate new drilling, producers have charted distinctive courses to navigate 2016 successfully, which in aggregate, will not likely lead to a flurry of additional crude production anytime soon.

JODI QUINNELL is manager of crude oil analytics at Genscape Inc. Before joining the company in 2012, she served as manager of oil analysis at BENTEK Energy, Rocky Mountain district hydraulic fracturing engineer at FTS International, and an associate technical professional of hydraulic fracturing at Halliburton. Quinnell holds a B.S. in applied mathematics from the University of Rhode Island and an M.S. in mineral economics from the Colorado School of Mines.