HOUSTON–With operators focused on striving for new levels of efficiency, the old ways of doing things, particularly with regard to how drilling rigs are operated, are no longer sufficient. One area that has been examined extensively is human performance: How can the industry advance its efficiencies beyond those of human capabilities, and how can it do so such that the new levels of performance are consistent, scalable, and measurable?

The onus to increase drilling performance usually falls on the driller, who is tasked with overseeing streams of complex data and tasks that need constant attention during ongoing operations. The skill necessary to perform these tasks means the quality of the driller can vary widely across fleets, based on experience, equipment and age, among other variables.

Beyond this, the major issue is consistency, since it is virtually impossible for a person to obtain the exact same result while repeating the same action over and over for a prolonged period. Varying from the norm, whether up or down, often results in the driller’s actual capabilities being misjudged, and this complicated system means it can be even more challenging to identify someone with the talent necessary to take on the job.

The current paradigm for improving performance typically involves collecting data on the rig, aggregating them, and developing algorithms that can be used to better advise the driller on subsequent projects and well programs. The problem with this method is that it creates a feedback loop with no real beginning or end. The data may exist and can be used to drive better decision making, but without a configurable platform, the results aren’t replicable because humans struggle to do the same thing the same way twice.

This is compounded by the fact that performance shifts significantly among employees, meaning that there is effectively no way to guarantee better performance, regardless of the data collected.

Two methods implemented to improve performance by way of the driller have proven ineffective.

One method is simple: push the top-performing driller further, demanding even greater improvements than before. This is equivalent to asking a driller in the top quartile of performance to operate in the top 5 percent. While this may be possible for some, such a course likely will have very negative consequences.

When pushed too far, the driller may experience fatigue and, after a period, be unable to consistently maintain such high levels of performance, dropping below even the standard he set previously.

The question of cost and return is also important, as the company must ask itself how much training is necessary for the driller to exceed previous performance levels, and what kind of return on that investment can be expected when consistency isn’t really possible.

Finally, even assuming nothing goes wrong, how can this performance be scaled across multiple rigs in a fleet? The ultimate outcome likely will be one high-performing rig and several standard rigs. 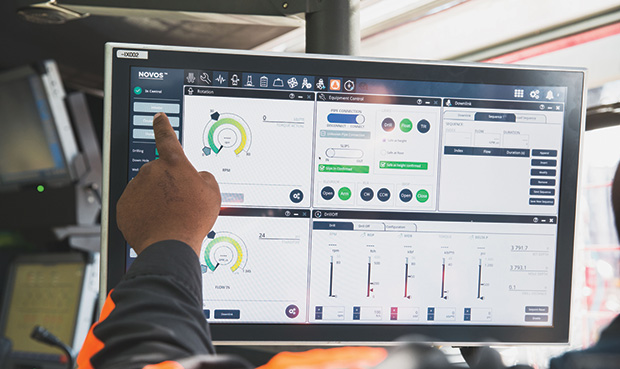 A driller monitors and directs operations on a screen using a state-of-the-art automated drilling platform. Empowered by the system, the driller can achieve a level of consistency that is hard to replicate without automation.

The other method for potentially improving driller performance is to promote the high-performing driller to tool pusher, where he can oversee the performance of a new team in an effort to increase that group’s performance collectively. There are several issues with this plan.

First, this promotion involves removing the best performer, who was responsible for the success of the rig in the first place. It also requires more training for this person in his new role as he familiarizes himself with the new tasks and responsibilities of being a tool pusher.

Finally, even assuming timely training and a smooth transition into the new role, the ability to affect the performance of others depends more heavily on each individual, rather than the recently promoted driller. If he is assigned to a group where every employee performs at an average or below-average level, the promotion may hurt the operation as a whole because the effective talent may not be leveraged in the right position. This also can damage the morale of the tool pusher, since he may feel responsible for the team’s failure to achieve success.

As is evident, both these solutions lack long-term sustainability and very well may damage the operation far more than they benefit it. This is where process automation can be used to bridge the gap between the driller and the processes.

A parallel with another industry that has transformed from manual to automated processes may provide some insight. Consider the fabrication and machine shop industry, and its transition from manual lathe operations to computer numerical control (CNC) operations. This helps illustrate why automation needs a platform to be successful.

The traditional process for operating a lathe was a meticulous endeavor that demanded high levels of skill and accuracy, and often required extensive training to reach the levels desired by customers.

Repeating the same process on a manual lathe over and over enabled individual skill to grow exponentially when that task was performed to achieve the same outcome. But if the specifications changed, the learning process effectively started over. This presented a challenge both because of the significant time required to retrain the lathe operator and the difficulty of retraining the mind to perform the task in a different way. The parallel to the oil and gas industry is that of a driller manipulating a rig control system.

In contrast, an automated lathe system or CNC system provides an opportunity for operational efficiency. Although the operator has to learn new skills, he ultimately gains consistency and speed, yielding long-term gains by controlling the entire process more effectively. Processes can be improved because they aren’t based on manual input, such as turning a crank to create a part, but rather are based on inputs to the CNC system itself.

If the operator notices a better way to do something, he simply can instruct the CNC engineer to create a better cutting path versus having to relearn an entire process of when to turn the crank. The burden of change is removed from the operator’s skill and placed on the CNC platform.

Improving a skill can take humans a very long time, while recognizing inefficiencies in a process through observation does not. As inefficiencies are recognized, the process can be optimized continuously in a virtual cycle of improvement within the automated system. This can be seen today in drillers using the new drilling process automation platform.

While the platform was being developed, there was a fundamental shift in philosophy toward automation that is reflected in the platform's design. To understand this shift, consider drilling automation philosophy as being a spectrum of driller interaction.

Early approaches to drilling process automation attempted to reduce the amount of interaction with humans. Once a system was activated, it was expected to perform all actions automatically with little to no interaction from the driller or drilling engineers.

There was simply too much variation in normal drilling operations for this approach to gain acceptance. If any condition was deemed out of the scope of the automation system’s capabilities, the only option was to continue the operation manually until conditions improved. This approach required countless permutations to be developed in the hope that nothing would be out of scope for the automation system.

Although the long-term goal for automation may be to reduce human interaction as much as possible, that point has not yet been reached.

Successes have focused on driller interaction and process flexibility. The drilling process automation system now is highly configurable to meet the varying demands of drilling a well. Having configurable processes yields higher system utilization and overall improved consistency over manual drilling. Now, drillers are learning how to manipulate configurations to affect the drilling process instead of practicing joystick movements and coordinating button presses.

An established platform is an important milestone because it paves the way for further advancements through machine learning and artificial intelligence. Without a consistent platform, machine-learning algorithms may not be able to learn, and thus improve performance.

The automated system provides a common platform for controlling, monitoring, scheduling and optimizing drilling operations. This results in safer and more efficient well construction. The drilling engineer can use data captured through the system to evaluate and optimize configurations.

When these configurations are implemented, the data become actionable and can be used to create a closed loop from the drilling engineer to actual changes at the rig. This level of optimization is rarely achieved during manual operations.

As the data become more structured and defined, lessons can be applied to automation and then scaled across fleets. Standard processes, which include hoisting slips, ramping flow, ramping rotation and lowering the string, vary significantly when performed by a driller. The driller, when empowered by the system, achieves a level of consistency that is hard to replicate without automation. 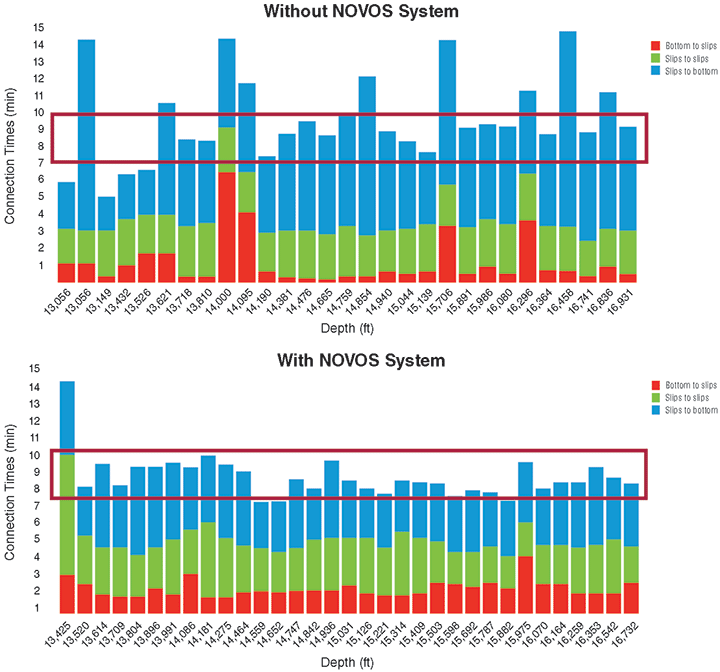 While the top graph has several instances in which performance times are faster, note the consistency achieved in the bottom graph. The average trends toward a lower overall time than purely manual drilling, as illustrated by the comparative box around the same time frame on each graph.

Process automation is changing the way wells are drilled and is shifting the historical performance paradigm. This type of system will increase in importance as the industry seeks to unlock new efficiencies in challenging horizontal and directional applications, particularly as new applications are developed and the system can perform a wider variety of tasks.

The potential for progress will be bolstered by the onset of the digital oil field, where humans and machines will be more closely interconnected.

Software developers–from operators, drilling contractors and even universities–already are creating their own applications to use on the system, thereby broadening its ability to address even niche or unusual scenarios. As additional companies use the platform, it will mature and its capabilities will become increasingly refined.

In addition, the company is working to create machine-learning algorithms that will allow the system to learn actively. There will be far less concern over individual ability as drillers are empowered by automated processes and more informed, aware decision making: another step forward as the industry pivots toward technology.

RYAN HANFORD is the product development and commercialization manager for the NOVOS™ process automation system at National Oilwell Varco. He has 15 years of oil and gas experience, working in various service and manufacturing roles in sales, engineering, and product management and development. Hanford graduated from Texas Tech University in 2003 with a B.S. in mechanical engineering technology and received his M.B.A. from Rice University in 2012. Hanford also has two oil-and-gas-related patents and has published multiple industry papers.

VINESH RAMBALLY is a business development manager at National Oilwell Varco, where he is responsible for the commercial integration of applications onto the NOVOS system. Rambally joined NOV in 2008 as an application engineer with the marketing services team for control systems. He graduated from the University of Houston in 2005 with a bachelor’s in computer engineering technology and completed the NOV Ventures-Technology Commercialization Program at the University of Texas in 2012.

STEPHEN FORRESTER has worked at National Oilwell Varco as a marketing/technical communications writer since 2014. He researches and executes strategic marketing communication and technical writing opportunities to support the company’s diverse businesses. Before joining NOV, Forrester worked for the oil and gas division of Lloyd’s Register as a technical editor. He holds a B.A. and M.A. in English from the University of Houston.