WASHINGTON–The number of drilled but uncompleted wells in U.S. shale plays reached the lowest level in four years in June, according to the U.S. Energy Information Administration.

Of course, a dwindling number of DUCs in inventory implies a greater demand for drilling rigs as producers work to offset natural production declines with new-well completions. Even with DUCs decreasing (implying the completion of previously drilled wells), new-well oil production per rig in the Permian was only marginally higher in June than it been in June 2018 (1,234 versus 1,228 barrels a day per rig) when roughly twice as many rigs were drilling in the basin.

In its July Short-Term Energy Outlook, EIA forecasts that 2022 global consumption of liquid fuels will exceed pre-pandemic levels. After falling by 8.6 million barrels a day year-over-year on average in 2020, the agency expects global consumption to grow by 5.3 MMbbl/d in 2021 and rise by an additional 3.7 MMbbl/d next year to 101.4 MMbbl/d, which would top 2019’s all-time record daily demand.

However, EIA says higher output from OPEC+ members and accelerated growth in U.S. tight oil plays will lead to a scenario in which production increases by more than consumption in the months ahead, balancing the market at the higher demand level. Brent spot prices averaged $73 a barrel in June, up $5/bbl from May. Its forecast calls for Brent to average $72/bbl over the second half of this year and $67/bbl for full-year 2022.

EIA projects that global inventories will continue to fall in the near term, but at a slower rate of 0.2 MMbbl/d in the second half of this year, before starting to rise by an annualized average of 0.5 MMbbl/d in 2022. 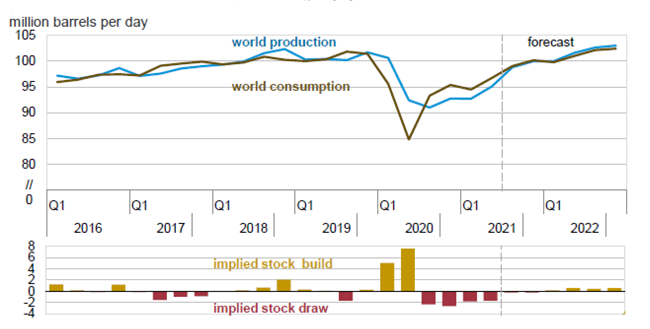 After slipping by 2.2% in 2020, U.S. natural gas consumption is projected to decline by 1.1% in 2021 and then rebound by 0.7% in 2022. “Most of the forecast decline in consumption this year is the result of less natural gas use in the electric power sector, which we expect to continue to decline because of rising natural gas prices,” EIA explains.

In a financial analysis of 91 global oil and gas companies with publicly available financial statements, EIA reports that 76% had positive free cashflow in the first quarter and 75% reported positive upstream earnings. Of the companies analyzed, 54 are based in the United States, 17 are Canadian, 10 are based in Europe, and 10 are located elsewhere around the world. 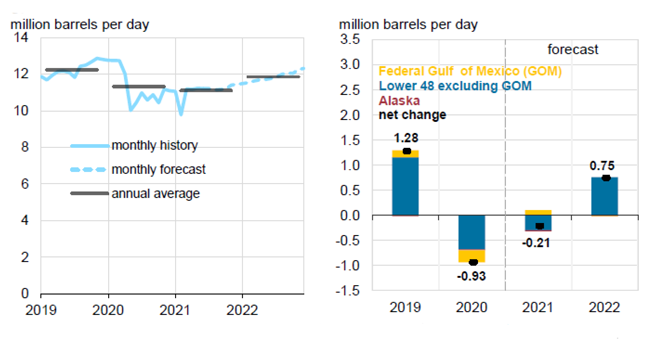