WASHINGTON–In the Short-Term Energy Outlook (STEO) it released in September, the U.S. Energy Information Administration projects crude oil spot prices just shy of $100 a barrel for the rest of the year and a similar outlook for 2023 amid record U.S. oil output. Meanwhile, EIA predicts ongoing power demand will keep U.S. natural gas prices within shouting distance of $10 an MMBtu for the rest of year, followed by a decline in 2023 that still should leave gas prices at levels well above those of recent years.

“The Brent crude oil spot price in our forecast averages $98 a barrel in the fourth quarter of 2022 and $97/bbl in 2023,” the agency relates. “The possibility of petroleum supply disruptions and slower-than-expected crude oil production growth continues to create the potential for higher oil prices, while the possibility of slower-than-forecast economic growth creates the potential for lower prices.”

Regarding natural gas, EIA observes, the August Henry Hub spot price averaged $8.80/MMBtu, up from $7.28/MMBtu in July, amid strong electric power sector demand that has kept natural gas inventories lagging their five-year average. “We expect the Henry Hub price to average about $9/MMBtu in 4Q22 and then fall to an average of about $6/MMBtu in 2023 as U.S. natural gas production rises,” the STEO states. 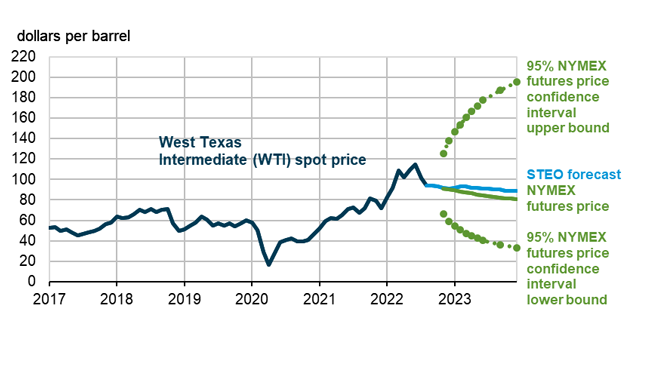 EIA attributes that increase partly to strong global natural gas demand that has prompted power generators to seek better margins. “As a result of high natural gas prices globally, we increased our forecast for oil consumption in 4Q22 and 1Q23 as electricity providers, particularly in Europe, may switch to oil-based generating fuels,” the STEO maintains.

According to EIA, U.S. natural gas inventories ended August at 2.7 trillion cubic feet, falling 12% short of the five-year average. The agency predicts this year’s final storage figures will narrow–but not eliminate–that gap. “We forecast that inventories will end the injection season (April through October) at more than 3.4 Tcf, which would be 7% below the five-year average,” it states.

Meanwhile, the STEO continues, U.S. liquefied natural gas exports likely will keep expanding. “U.S. LNG exports in our forecast average 11.7 billion cubic feet a day in 4Q22, up 1.7 Bcf/d from 3Q22,” it reports. “Factors that will affect the volume of LNG exports in the coming months include the planned outage at Cove Point in October and Freeport LNG resuming partial operations by mid-to-late November. We forecast LNG exports will average 12.3 Bcf/d in 2023.”

A variety of users will make sure the country’s gas demand stays on its growth trajectory this year before that trend slips in 2023, EIA adds.

“U.S. consumption of natural gas in our forecast averages 86.6 Bcf/d in 2022, up 3.6 Bcf/d from 2021, driven by increases across all consuming sectors,” the STEO details. “We expect consumption to fall by 1.9 Bcf/d in 2023 because of declines in consumption in the industrial and electric power sectors.”

According to EIA, the largest increases in U.S. electricity generation will come from renewable energy sources, mostly solar and wind. The agency projects renewable sources will provide 22% of U.S. generation in 2022 and 24% in 2023, up from 20% in 2021.

Meanwhile, EIA says gas-fired generation looks like it will remain largely flat this year and tick slightly downward in 2023. The STEO predicts coal’s market share will continue to slide.

Regarding U.S. residential electricity prices, the STEO anticipates a nationwide average of 14.8 cents a kilowatt-hour in 2022, a 7.5% increase from 2021. “Higher retail electricity prices largely reflect an increase in wholesale power prices driven by rising natural gas prices,” EIA says. “The Southwest region has the lowest forecast wholesale prices in 2022, averaging $69 a megawatt-hour (MWh), up 25% from 2021. The highest forecast wholesale prices are at more than $100/MWh in independent system operators (ISO) New England (up 96% from 2021) and New York ISO (up 124% from 2021).”

According to EIA, U.S. coal production in the forecast increases 22 million short tons (MMst) in 2022 to total 600 MMst for the year. The agency says it expects total coal production to fall to 590 MMst in 2023.

As for energy-associated carbon dioxide emissions, EIA predicts a slight rise, followed by a drop of almost equal size. “We expect energy-related CO2 emissions in the United States to increase by 1.7% in 2022 and then to decrease 1.8% back to around 2021 levels in 2023,” the STEO concludes.