HOUSTON–Frac designs have evolved significantly over the past decade, with “high-intensity” completions engineered to increase productivity. More proppant and fluid, tighter cluster spacing, and longer lateral lengths are some of the main drivers that enhance production performance. This evolution of frac design has led to the conclusion that many older wells may have been understimulated.

Recovering the reserves left behind in understimulated wells requires refracturing using modern frac designs. Operators have attempted many techniques to restimulate older wells, with some using methods that involve coiled tubing and packers. While the primary driver for any refracturing work is to boost base production and unlock stranded reserves with low capital investment, success depends on isolating existing perforations.

An efficient means of achieving 100% mechanical isolation in the lateral section is running a solid expandable liner across perforated intervals, allowing refracturing treatments to be pumped through new or existing perforations. In the Niobrara/Codell play in the Greater Wattenberg Field in the Denver-Julesburg Basin, where vertical wells have been successfully refractured in the past to restore production, Coretrax was contracted by an independent operator to ascertain if it was possible to replicate the performance of vertical well refracs in a cased-hole horizontal well using expandable liner technology and a plug-and-perf treatment.

The operator’s objective was to increase the life of the field by restimulating wells that were underperforming as a result of undersized or inferior completion designs and/or mechanical issues. The candidate well selected for refracturing was a smaller-diameter wellbore with 4 ½-inch casing. The small hole size limited equipment availability, but several refrac methods were considered for refracturing, including:

With oil production from the well depleted to only three barrels a day, the operator decided that the most suitable method was running a ReLine™ MNS expandable liner and pumping a slickwater refrac using a plug-and-perf treatment. Following three drift runs to recover debris, a 7,253-foot liner was expanded across the length of the lateral with a new 3.321-inch inside diameter. This provided the largest ID for restimulation to allow 7.8 million pounds of proppant to be placed at high pump rates. 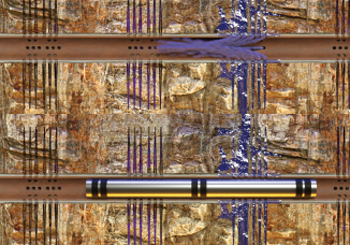 The ReLine system provides a single-trip solution with no shoe milling to clad and seal various wellbore integrity concerns with minimal loss of inner diameter (ID), while providing high burst and collapse ratings. The cased-hole patch technology is designed for deployment on jointed pipe and can cover long or short intervals from 30 to 7,000 feet. It can be configured to expand and seal across various ID restrictions in the wellbore, such as nipples or frac sleeves.

One unique capability of the system is that the running tool configuration allows the liner to be expanded in multiple load conditions. Importantly, it can be left at a “neutral” position before anchoring the top seal and exiting the liners with the inner string. This neutral load condition is critical for reliability in severe fracturing downhole environments.

System deployment is simple and straightforward. First, the expandable casing and work string with expansion cone were made up and run in the hole. Expansion was then initiated using hydraulic pressure to activate the cone and set the bottom anchor seals, securing the expandable liner to the casing. The length of the liner was mechanically expanded by pulling the work string up the hole at rates as high as 1,000 feet\hour, reducing pulling weight at the last joint to put the liner into neutral and relieve tension in the liner joints. The upper anchor seals were then expanded hydraulically to anchor the top of the liner to the casing. At that point, the work string was pulled out of the hole.

Running the expandable liner through the lateral resulted in a “like-new” cased-hole wellbore, with mechanical isolation restoring pressure integrity with minimal wellbore ID loss for plug-and-perf refracturing. While initial results were promising with oil production increasing from 3 to 200 bbl/d and gas production more than doubling, the well’s long-term performance was not as successful as historical vertical refracs in the Wattenberg. The economics of a liner refrac may be difficult to rationalize on a single-well operation like this one, but potentially, the real value in this kind of project is achieved by combining increased production in the refractured well with higher production in offset child wells as a result of protecting them from interference during treatment.

As part of this refrac project, the operating company set a total of five long casing patches, ranging from 2,500 to 7,200 feet, on wells initially completed using both sliding sleeve and plug-and-perf methods. There were no operational issues while setting any of the patches or pumping the associated refract treatments.

Coretrax has since completed further activity with another D-J Basin producer to refrac an infill pad (two parent wells and 11 child wells). By refracturing multiple wells simultaneously, the operator sought to restimulate the existing pads while providing increased reservoir pressure to ensure production from new infill producers. Initial results show increased production from all wells on the pad. In addition, the same operator is planning to restimulate two Utica Shale wells in the first half of 2021 using the expandable liner system. 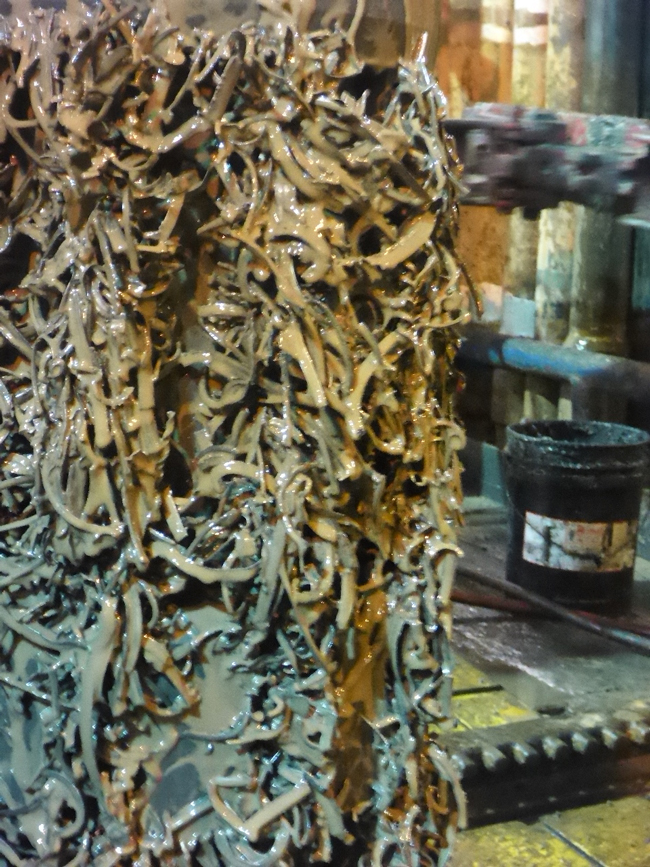 Well preparation and lateral cleanout are vital to ensuring the expandable liner can be run to the intended depth and expanded successfully. Horizontal wells often contain ferrous debris generated by completion and production operations that must cleaned out before installing expandable liners for refracturing.

In today’s cost-constrained climate, full-lateral refracturing using expandable liner technology gives operators the ability to access unrecovered reserves in recompleted existing horizontal wells at significantly lower cost than drilling and completing new wells. Expandable technology is an ideal example of a new innovation that would not have been available a decade ago. Like any operation, the risk of doing what is well known but expensive compared to what is unknown and more cost-effective is the daily conundrum to support the evolution of effective, productive and sustainable drilling and completion operations.

A comprehensive study of the candidate history, including recent interventions and chemical treatments, should be seriously considered while assessing the amount of preparation and cleanout needed to run an expandable liner of conduct a refrac treatment. Horizontal wells can contain a significant amount of ferrous debris generated by completion and production operations over the life of a well that must be removed before refracturing. This is crucial step for ensuring wellbore integrity.

Whether cladding over and sealing trouble areas of the lateral with minimal loss of ID or relining an entire lateral section for refracturing, the expandable system is deployed with higher-performing materials and a unique frac sealing system for applications requiring isolation with and high burst and collapse ratings. This enables it to handle high for frac treating pressures as well as the induced loads from large temperature cool downs.

Essentially, for optimal refracturing, the efficiency and effectiveness of the wellbore cleanup phase can make a huge difference to the success of the recompletion. Well preparation and lateral cleanout are the most vital components to ensure the expandable liner can be run to the intended depth and expand successfully.

SCOTT BENZIE is chief technology officer at Coretrax. He founded Mohawk Energy in 2004 and joined Coretrax in 2019 following its integration with Mohawk Energy and Churchill Drilling Tools to create a comprehensive service offering for all phases of a well’s lifecycle. He has pioneered tubular expansion technologies, including the ReLine MNS™ expandable case-hole liner system. Benzie began his career in R&D and engineering roles with Baker Hughes, e2 Tech/Weatherford, and Shell. He holds a B.S. in mechanical engineering from Heriot-Watt University.