Among the primary drivers toward a “golden age of gas” identified by the International Energy Agency, natural gas demand in China is expected to match that of the entire European Union by 2035, while demand in India is likely to be four times that of today by 2035.

Global natural gas resources, according to IEA, can address this continual rise in demand in new and existing markets comfortably, as well as sustain supplies well into the future.

However, much new natural gas supply is located away from infrastructure, and moving it to market in a practical, economic and efficient way remains a challenge. Let us not forget, gas is difficult to transport. Among the challenges facing gas producers are delays and uncertainties surrounding pipeline construction, which is becoming an increasingly difficult and costly undertaking.

Why not turn natural gas into liquid products that are easier and less costly to transport? There are a handful of gas-to-liquids plants around the world that do just that. But the economics of mega-scale GTL projects work only at a handful of locations. What about smaller gas resources?

Smaller scale GTL is the answer. It allows producers to make the most of their available resources by converting shale, stranded or associated gas into premium products ranging from diesel or jet fuel to specialty products such as base oils, waxes or solvents. This gives gas producers access to higher value markets, which allows them to partially diversify to oil pricing and potentially increase revenues.

Furthermore, having a GTL plant in their portfolio allows producers to use any component of the gas available, and not only the methane, which gives them the flexibility to send the least valuable molecules to the GTL plant, leaving the higher valued components to access the market through more conventional (often capacity-limited) pipeline infrastructure.

GTL makes sense in the new gas-rich world. Natural gas, itself, is a poor substitute for most transportation fuel needs; infrastructure challenges inhibit the widespread adoption of compressed and liquefied natural gas for mainstream automotive purposes. In contrast, GTL is designed to make exactly the liquid fuels the world most thirsts for and is best configured to utilize: diesel and jet fuel.

Chemical processes for converting natural gas into useful liquid products have been around for a long time. The two main established chemical processes that do this are GTL and MTG, or methanol-to-gasoline. Both processes start with reforming natural gas into synthesis gas (a mixture of hydrogen and carbon monoxide), but it is the GTL process that has been more broadly practiced. Royal Dutch Shell, for example, has a 140,000 barrel-a-day operation in Qatar, where Sasol also has a 35,000 bbl/d plant. 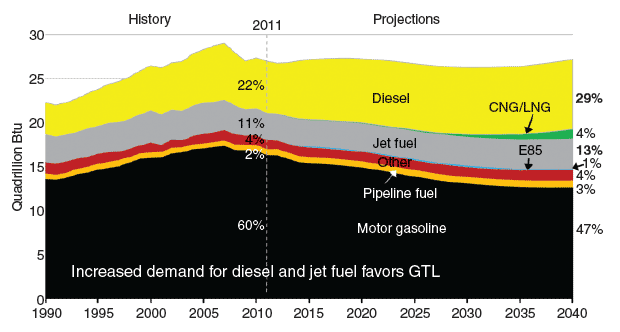 At present, the United States has excess capacity to produce gasoline–the end product of the MTG process. According to the Energy Information Administration’s 2014 Annual Energy Outlook, gasoline consumption is expected to decline by 2.1 million barrels a day by 2040 (Figure 1). Conversely, the same report says demand for diesel–a product of the GTL process–is expected to grow by 900,000 bbl/d by 2040.

Demand for the products made by the GTL process continues to grow worldwide.

Making The Most Of Resources

While smaller-scale GTL previously was regarded largely as a concept only, it now is becoming more widely recognized that bigger may not always be better in monetizing gas resources.

Smaller scale GTL became a reality in 2014, with construction getting under way on the first commercial GTL plant using a cost-effective modular technology that features microchannel reactors contained within skid-mounted units. The modules use a standardized design, making them highly flexible. They have the ability to scale to match the size of the targeted resource and easily integrate with existing facilities.

The project, which is located near Oklahoma City, is sponsored by two Fortune 500 companies: Waste Management and NRG Energy, in association with Ventech Engineers and Velocys. Major equipment was being purchased in November, and the plant is expected to enter full commercial operation in less than 24 months.

Only about 6 percent of the world’s known natural gas fields are big enough to sustain a conventional, large-scale GTL plant. In contrast, smaller scale GTL plants are designed to operate efficiently and economically when producing between 1,500 and 15,000 bbl/d of liquid fuels, which requires 15,000-150,000 MMBtu of gas a day. Instead of the $20 billion estimated capital cost for a mega-scale plant, a 2,500 bbl/d GTL plant costs around $250 million, or roughly $100,000 for every barrel of installed daily capacity.

Smaller scale GTL makes the most of resources that previously would have been wasted. GTL at this scale has the potential to unlock up to 50 percent of the stranded gas fields that conventional GTL cannot exploit economically, as well as to provide a cost-effective way to take advantage of other undervalued resources, such as shale gas. 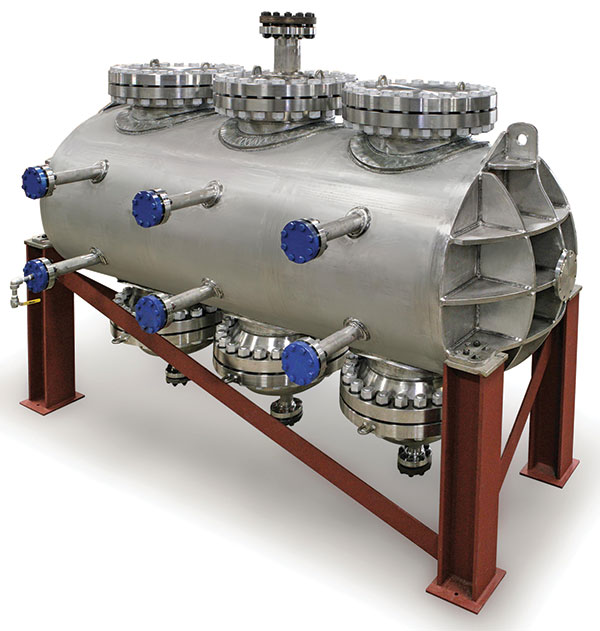 Smaller scale gas-to-liquids plants are engineered with a modular design so that components may be manufactured and shipped in standard-sized shipping containers, making them easier to transport and install quickly, even in remote locations. A 2,500 barrel-a-day GTL plant typically costs around $250 million. Shown here is a Velocys pilot plant located in Plain City, Oh.

North America is at the forefront of the shale gas revolution, and it is here that the opportunity for using cheap gas to power a wide range of industries is really opening. Shale is an inherently distributed phenomenon, so it will drive industry toward smaller scale, distributed plants that are closer to the source, such as at gas gathering and processing sites.

Reduced flaring is another driver for smaller scale GTL, particularly in some international markets such as Russia and the Caspian region, and parts of Africa. Flaring associated gas is heavily restricted or banned in many parts of the world. The obvious economic benefit here is the potential for fewer fines, as well as return on a production stream on which a producer might be taxed or have to pay royalties, that otherwise would be lost.

But a more significant economic advantage is that diverting associated gas to a GTL plant may “unlock” oil reserves that would not be economically accessible if the producer was subject to fines for flaring associated gas.

The Fischer-Tropsch (FT) process, which is the central step of GTL, has been practiced since the 1920s. It has been proven to work, making substantial profits for the plants’ operators, Shell and Sasol. But mega-scale GTL is suitable only for a handful of coastal locations worldwide, and its price tag makes it accessible to only a handful of oil majors. Smaller scale GTL opens the benefits of GTL “to the mainstream,” including the many independent producers with a pioneering mind-set that operate across North America.

One of the biggest barriers to adopting GTL in the producer space is capital cost; most gas producers are not used to the capital intensity of GTL.

However, there is a degree of flexibility when it comes to the role that producers can play in developing a GTL project. For example, producers may be presented with the option to only supply the gas, to participate in the GTL project itself through a minority or majority equity stake, or even supply the gas and get back finished, tax-advantaged, liquid fuel for their own use at drilling sites. A flexible approach such as this will allow more companies to capitalize on more opportunities.

Companies also are thinking laterally to make early projects a reality, rather than being type-cast solely as technology providers. For example, in June, Velocys acquired one of the leading project developers of smaller scale GTL plants in North America, together with its GTL project in Ashtabula, Oh. That plant will produce 4,200 bbl/d of high value specialty products and ultraclean transportation fuels.

The experience and lessons learned in this project are being transferred to other projects where FT technology is provided with the aim of supporting all aspects of project development and execution.

Not only does smaller scale GTL allow gas producers to access global markets, in certain areas, it gives them the opportunity to produce diesel to meet significant local demand. In Australia, for example, mining communities based in very remote locations consume huge amounts of diesel and fuel importation costs are very high. 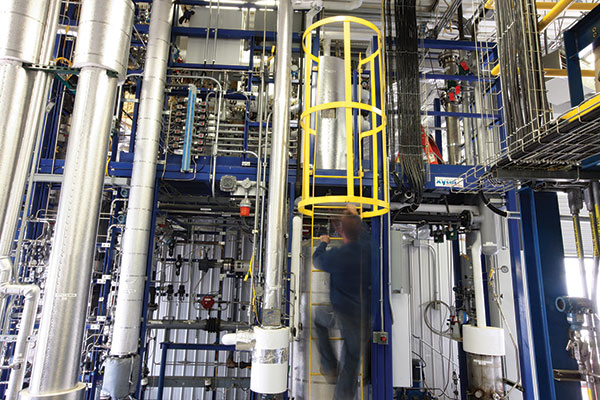 The Fischer-Tropsch reactors used in smaller scale gas-to-liquids plants may be configured to efficiently produce 1,500-15,000 barrels a day of liquid fuels, consuming 15,000-150,000 MMBtu of natural gas in the process. The reactors employ microchannel FT technology and a superactive catalyst to intensify chemical reactions in order to overcome mass and heat transfer problems inherent in conventionally-sized GTL plants.

Several technological advances have made widespread access to GTL possible.

The plants that smaller scale GTL technology is designed to be deployed in are not simply scaled down versions of larger plants. Mass and heat transfer limitations reduce the efficiency of large conventional FT reactors. Using microchannel FT technology and a superactive catalyst makes it possible to overcome these limitations by intensifying chemical reactions relative to conventional systems and allowing smaller reactors to be used. Plant components are standardized, be it the FT reactor cores or the design of 700-bbl/d trains of reactors, which further reduces plant costs.

The smaller reactor size enables a modular approach to plant design. The plants are fabricated mainly in a factory environment, and each unit is designed to fit into a standard-sized shipping container. Roughly 70 percent of the plant is complete before the modules are transported, meaning smaller scale GTL plants are easier to ship and can be installed more quickly, even in the most remote or challenging locations. Timelines from concept to operation are reduced significantly, as are risks of delays.

The potential for distributed GTL plants to monetize resources that at present are considered uneconomic is capturing the interest of a growing number of gas producers. Modular GTL plants can be scaled to match the size of the resource, and offer an efficient and cost-effective way to produce clean liquid fuels from shale and stranded gas resources.

Roy Lipski is chief executive officer of Velocys, which is commercializing a smaller scale gas-to-liquids solution. He has headed fast-growing technology companies for 18 years, and has pioneered modular GTL technology since 2005, when he helped found Oxford Catalysts, leading it through an initial public offering and subsequent acquisition of Velocys Inc., a company that specialized in microchannel process technology. Lipski holds a degree in biochemistry from Cambridge University. He began his career working at Goldman Sachs in London.