Global investments in liquified natural gas infrastructure are forecast to surge over the next couple years, even while international oil and gas exploration activity declines with the number of licensed blocks falling to or near record lows, according to research from Rystad Energy.

As consuming countries across the globe scramble to secure sufficient natural gas supplies, LNG infrastructure investments are expected to reach $42 billion annually in 2024, representing a 20-fold increase in greenfield LNG projects over 2020-when only $2 billion was invested in LNG developments.

Spending on new LNG projects has been relatively flat, with $28 billion approved in 2021 and $27 billion this year. Investments sanctioned in 2023 should show a modest increase of $32 billion, before peaking at $42 billion in 2024. Thereafter, however, greenfield LNG investments are projected to fall sharply. Rystad estimates that project approvals will slide to $2.3 billion annually by 2029 before temporarily jumping to nearly $20 billion in 2030, but then decline again as countries scale up long-range investments in low-carbon technologies.

Driven by power generation consumption and supplied largely by growth in U.S. export capacity, short-term global LNG demand is set to grow by 12.5% through 2030, from about 4 trillion to 4.5 trillion cubic meters (Tcm). On the back of strong economic growth and pro-natural gas governmental policies, regional demand in Asia-Pacific will soar by 30% to hit 1.16 Tcm by 2030. With natural gas demand in the Americas remaining relatively flat, Asia-Pacific will account for 25% of cumulative gas demand by 2030 compared to 30% for the Americas, the report states.

With new infrastructure in place, total LNG supply is expected to almost double from 380 million tons per annum (Mtpa) in 2021 to 636 Mtpa in 2030, with several major LNG projects already underway or in the pipeline. Rystad predicts that LNG production will peak at 705 Mtpa in 2034.

“Recent price surges in natural gas markets worldwide have somewhat constrained gas demand. However, governments remain bullish on gas as an affordable, transition fuel for power in the coming years, as demonstrated by the rapid growth in LNG infrastructure investments,” says Palzor Shenga, vice president of analysis at Rystad Energy.

To supply the demand growth, the United States is set to solidify its place as a top LNG exporter as increased domestic supply and higher prices in Europe and Asia encourage operators to sell gas overseas. The $10 billion Golden Pass LNG project in Texas, a joint venture between QatarEnergy and ExxonMobil, is scheduled to start production by 2024, adding export capabilities to the Sabine Pass LNG terminal to total 18 Mtpa. Venture Global’s Plaquemines LNG in Louisiana (a $13.2 billion development sanctioned earlier this year) is expected to produce about 24 Mtpa and start up in 2025. 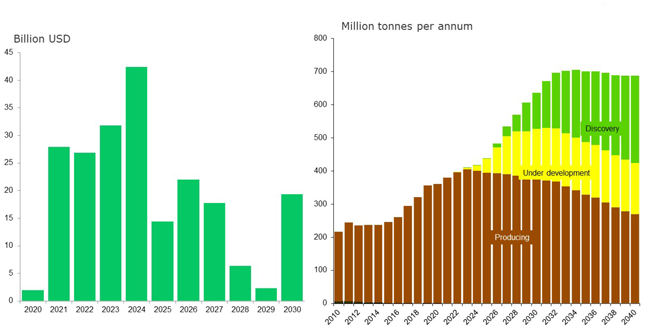 In a move that Rystad says may become more common in the crowded market, Cheniere Energy signed a deal with Chinese state giant PetroChina to supply 1.8 Mtpa of LNG from its Corpus Christi, Tx., LNG facility, with deliveries from 2026 to 2050.

Elsewhere, Qatar and Mozambique are playing catch up. Qatar, already a major producer, aims to boost LNG export capacity to 126 Mtpa by 2027 from a 77 Mtpa today. International industry heavyweights ExxonMobil, Shell, TotalEnergies, Eni and ConocoPhillips have been chosen to join state-owned QatarEnergy in the North Field East expansion project, which is set to raise capacity to 110 Mtpa.

In Africa, Mozambique will see its first LNG production by the end of 2022 via the Eni-operated Area 4 (Coral South) project. The project will provide around 150 million cubic feet a day of gas to the domestic market.

“Projects that have been approved or are currently being developed will recover 300 Tcf of LNG, led by the United States with 97 Tcf, then Qatar with 52 Tcf, and Russia with 50 Tcf,” Shenga remarks. “These top three nations hold 70% of the total sanctioned, yet-to-be-produced global LNG resource.

In a separate report, Rystad Energy notes that only 21 lease rounds were completed globally through August, or half of the 42 rounds held in the first eight months of 2021. The acreage awarded so far this year has shrunk to a 20-year low of 320,000 square kilometers. Global lease rounds are expected to total 44 this year, 14 less than in 2021 and the lowest level since 2000.

Global spending on exploration has been falling as companies seek to limit risk by focusing on core producing assets and regions with guaranteed output, streamlining their operations and building a more resilient businesses amid market uncertainty and the threat of a recession. The political landscape is also contributing to the decrease in license awards, with many governments pausing or halting leases and encouraging companies to wrap up exploration activity within already awarded blocks. This trend is likely to continue as governments are less eager to invest in fossil fuel production and instead look ahead to a net zero future, the report says. 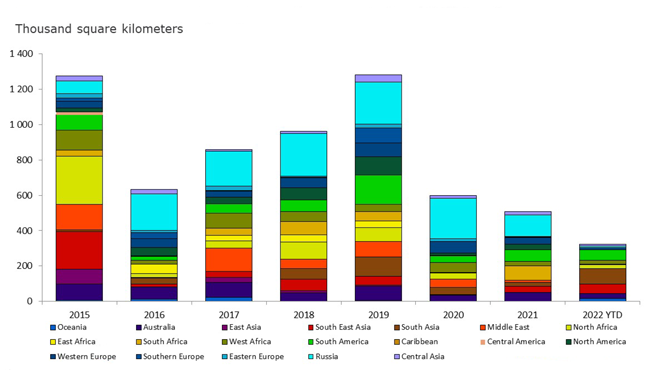 “Global exploration activity has been on a downward trend in recent years, and that looks set to continue this year and beyond. It is clear that oil and gas companies are unwilling to take on the increased risk associated with new exploration or exploration in environmentally or politically sensitive areas,” comments Aatisha Mahajan, vice president of analysis, at Rystad

The onshore exploration sector is a significant contributor to the decline in awarded acreage. Total onshore acreage awarded in leasing activity has plummeted from more than 560,000 square kilometers in 2019 to 115,000 square kilometers so far this year. Offshore leased acreage also hit a high point in 2019 before dropping in 2020 and remaining relatively flat over the past two years.

Concluded lease rounds have dropped significantly in the United States, primarily as a result of the cancellations of lease sales 259 and 261 in the Gulf of Mexico and the Cook Inlet in Alaska. Licensed acreage in Africa shrank 70% to only 46,000 square kilometers, with Angola, Egypt, Morocco and Zimbabwe the only African countries to award new exploration acreage in 2022.

On the other hand, new acreage awarded in Malaysia, Indonesia, India and Pakistan nearly quadrupled the Asia region’s total for the same period last year, while South American awarded acreage surged by 140%.

Overall, however, the global decline in licensing rounds has directly affected the awarded acreage, which hit an all-time low for January to August of about 320,000 square kilometers, according to the report.

Other sizeable block awards were Norway with 54 new licenses in its APA 2021 round, India with 29 blocks its OLAP Rounds 6 and 7, and Kazakhstan’s fourth oil and gas auction round, in which 11 blocks were awarded. There was also some sporadic activity in Africa, with Egypt providing rights to explore in nine blocks and Angola granting two blocks. South America saw an offshore licensing round in Uruguay, where three exploration blocks were awarded : blocks OFF-2 and OFF-7 to Shell and Block OFF-6 to U.S. independent APA. Challenger Energy signed a 30-year license for OFF-1 through direct negotiation with the government.