Enhancing oil recovery from mature oil fields is becoming a standard operational procedure in the industry because of the huge volumes of valuable unrecovered oil left behind in reservoirs after primary and secondary recovery processes. In fact, 65-90 percent of original oil in place remains in a typical reservoir after primary recovery, and more than 50 percent typically remains after secondary recovery operations (water and gas flooding) are completed.

Microbial enhanced oil recovery (MEOR) is one of the technologies that has received significant attention over the past several decades. Its advantages versus other enhanced oil recovery processes include reduced energy requirements versus thermal methods–such as steam flooding–and reduced chemical costs compared with chemical methods–such as polymer or alkaline-surfactant-polymer flooding.

With applications to increase production both during and after the primary production phase, as well as during and after secondary recovery, MEOR typically is implemented with low extra capital cost in the field, as additional surface facilities generally are not required. Other environmental benefits often are attained, predominantly with regard to the low toxicity of MEOR’s injected products. This advantage is quite pronounced for single-well clean-out and stimulation treatments, where toxic solvents often are used for paraffin and ashphaltene dispersal and removal.

MEOR is classified based on where the microbes, generally bacteria, are produced. The in-situ process produces bacterial bioproducts inside the reservoir either by stimulating the indigenous reservoir microbes with nutrients or injecting beneficial bacteria cultivated from the reservoir. The ex-situ process involves fermenting exogenous biobased products in surface facilities outside the reservoir, then injecting them with or without the separation of the microbes.

The action mechanisms during MEOR floods are obtained by the presence of microbial metabolites in the reservoir. The useful byproducts include biosurfactants, biopolymers, biosolvents, and/or biocatalytic enzymes that work together in a complex manner to reduce interfacial tension and crude oil viscosity, while increasing rock water wettability and water viscosity. These interfacial processes ultimately result in enhanced oil flow to the producing wells.

MEOR processes can be further classified according to which oil production problem in the field is being addressed:

Although field flooding processes have been studied most extensively, single-well stimulation processes also are amenable to microbial technologies and are receiving increasing attention.

Previously, there was a general lack of understanding of microbial oil recovery mechanisms and deficient mathematical models to predict microbial behavior in reservoirs. Developing mathematical MEOR models is very challenging, since physical, chemical and biological factors all need to be considered. As modeling applies mainly to reservoir flooding processes, more emphasis has been given to single-well microbial-based removal of paraffin and skin damage in addition to treatments designed to increase oil production (such as EOR), where complicated models and detailed mechanistic understanding of the action of the microbial products are not as important.

Extensive laboratory testing is required prior to field implementation to select suitable microbes and to understand their growth requirements and production conditions. Also required are optimizing nutrients and testing the microbes and their byproducts’ compatibility with reservoir conditions.

In the case of using microbial metabolites for MEOR, understanding which mechanisms of enhanced oil recovery are critical for success is essential to determine while performing experimental work in the laboratory. During field tests, design of the injected microbial or metabolite products, and their system of deployment and the resulting oil production response all must be well-documented. These requirements can be made difficult by a lack of consistency in reporting between microbiologists, reservoir engineers, geologists, economists and owner-operators.

Bacterial-induced hydrogen sulfide formation and corrosion have been huge problems in the oil industry, both in production and midstream areas. It is important to understand the interactions between the microbes, nutrients and metabolites used for enhancing production and the indigenous sulfate-reducing bacteria present in the reservoir to limit or reduce corrosion risks.

Despite the potential for reduced costs of bioderived chemicals, MEOR flooding processes often require large volumes of nutrients to be injected. Exogenous microbes require facilities for their cultivation. As effectiveness of microbial cocktails decreases with storage time, the facilities need to be located close to the points of application. Both factors historically have reduced the applicability of MEOR on offshore platforms because of logistical and storage limitations. Even in onshore processes, the loss of activity of injected microbial-based products during transportation and storage can hurt effectiveness during the treatments.

New trends are emerging in applying microbial-based technologies for enhancing oil-field production, including technologies to address some of the historical issues that have worked against widespread microbe use.

One approach is to utilize microbial-based products for single-well stimulation processes. Commonly, a MEOR fluid/nutrient medium is applied by a fluid squeeze or soak method to a producing well. Treatment fluids typically are injected into the formation through the annulus, followed by a shut-in period of a few days. Single-well treatments either are intended to stimulate microbial activity of indigenous microbes in the near wellbore and critical production rock matrix or to add nonreservoir-derived microbes and/or metabolites. The microbial metabolites reduce plugging materials and enhance oil flow to the well through reduced interfacial tension and increased water wettability of rock in the wellbore region.

Product options include a protein-based, nonliving biosurfactant that can be used as a stimulation chemical. With this technology, the injected solution, which is produced by microbes in a separate biochemical process, interacts with both oil and rock surfaces to release small oil droplets that can be dispersed and produced in the water phase.

Another option, and one of the fastest-growing new solutions, is a well treatment process using nonbacterial, microbial-derived biochemicals and enzymes that are tailored to individual wells. This process works in the reservoir using biochemicals that enhance oil and gas production as much as 500 percent under a wide range of well and reservoir conditions. The aqueous product contains highly effective, environmentally friendly active ingredients, including biosurfactants and biosolvents in high concentrations, which are applied to low-producing wells within a few hours of production of the treatment chemicals.

A key differentiator in the approach is that the solution is synthesized in a local, modular fermentation system using a patent-pending microbe generation. This fresh fermentation process ensures maximum potency at the points of application, and allows the treatment cocktails to be customized for each customer and tailored to specific regions or wells to improve efficacy. 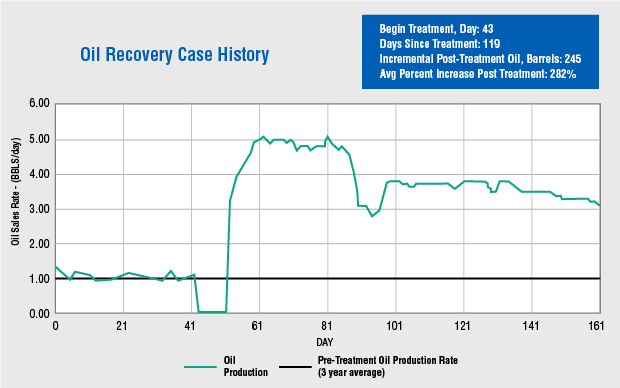 In addition, the treatment process also provides for the simultaneous removal of asphaltene and/or paraffin and scale from a well, enhancing crude oil or gas recovery. The nonbacterial blend of microbes used in the process is nontoxic, biodegradable, and non-GMO, with no special handling required.

This new treatment approach substantially and consistently increases production in oil and gas wells, as is being demonstrated in applications in the Appalachian and Permian Basins. Figure 1 shows an example oil recovery case history on an Appalachian well using the microbial-derived biochemical solution. It indicates significant production enhancement for several months after a single treatment. Theoretically, by changing the interfacial tension and wettability of oil in channels previously untouched by the recovery system, these treatments also should work in wells with recovery systems already in place, such as water and CO2 floods. Combined with biopolymer flooding, the treatments should be very effective at increasing oil recovery.

Microbial-derived products also have been tested and used for paraffin removal and control since the mid-1980s with mixed success. These formulations can offer superior environmental and toxicological properties versus conventional solvent treatments, and high-energy efficiency compared with thermal methods such as hot oiling or hot watering. However, many earlier microbe-based paraffin dispersal products suffered from a loss of effectiveness because of their low potency and/or short storage life, which can make their use less cost-effective than traditional remedial well treatments.

New approaches to the production of treatments have helped solve these issues through local fermentation of highly-dense, fresh solutions. One such example is a newly commercialized nonbacterial-based advanced microbial paraffin treatment product that contains bioderived chemicals that work to disperse paraffin accumulations and inhibit deposition in a wide range of oil and gas production equipment without expensive workovers. Similar to the microbial-derived biochemical solution for enhanced production, this aqueous product contains highly effective, active ingredients in large concentrations and is produced in a modular, local fermentation system using nonbacterial microbes.

In this approach, no nutrients are pumped in–a crucial differentiation from earlier microbial techniques that worked on the principle of feeding microbes down hole. By not injecting nutrients, this process has no danger of accidentally feeding antagonistic bacteria that could produce hydrogen sulfide or biofilms.

The formulation, when contacted with the wellbore and bottom of the well for a sufficient period of time, will break down and disperse the paraffin wax and accompanying mineral scale. The treatment product is pumped into the well through the annulus with no shut-in period required. The paraffin remediation program typically consists of periodic treatments in two-week to two-month intervals, depending on the severity of the paraffin problems.

In field applications, the microbial treatment has been extremely effective. Treated rods and pumps exhibit almost no paraffin when pulled from the well. Figure 2 shows sucker rods before and after treatment of an Appalachian Basin well. Well failures have been extremely rare during hundreds of treatments. The treatment does not push paraffin further into the formation, and unlike thermal treatments, there is no heat loss as the treatment product is used at ambient temperatures. Consistently using this treatment also can lower LOE costs by reducing the frequency of rod pulls and pump jobs. 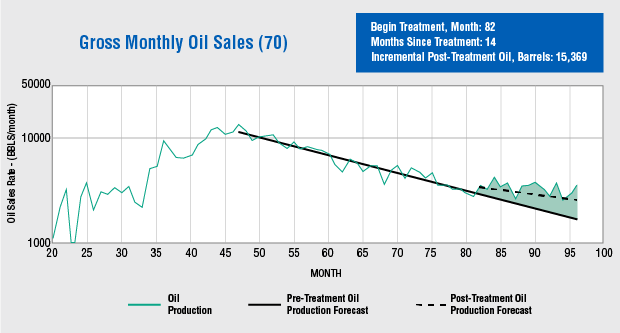 An important and unique property of the new paraffin dispersal process is an enhanced production effect observed on a majority of treated wells. Part of the enhanced production is obtained as the product continually disperses excessive paraffin blockages to improve flow. The treatment also reduces interfacial tension and crude oil viscosity, and alters wettability of rock close to the wellbore to ease oil access and flow from pores. Finally, progressive dissolution of biopolymers such as polylactic acid and guar gum from fracture jobs that are blocking flow in parts of the formation may play a role in the enhanced production.

Figure 3 shows production data for a multiwell testing program in Appalachia. Of the 70 treated wells, 95 percent exhibited an EOR effect with an average increase in production of 49 percent.

The outlook for using microbial-derived products in enhanced oil production and production well treatments is positive, thanks to these new technologies that resolve concerns and challenges. Approaches that include local fermentation of highly potent, fresh products customized to specific regions are creating more consistent results and higher efficacies. These innovative microbiological technologies are solving common oil field issues and improving interactions between microbiologists and production engineers.

The industry’s understanding of the complex interactions between microbes and the reservoir rocks and fluids will continue to improve with time. As the importance of ecological factors in oil-field production processes increases, the benefits of microbial products in this area will be fully appreciated and receive increased attention and focus.

Kirk Raney is a petrochemist and principal consultant for Locus Bio-Energy SolutionsTM LLC, an Ohio-based company providing upstream nonbacterial, microbial-based solutions such as AssurEOR FLOWTM for paraffin treatment and dispersal. He has held various senior research roles at Shell, and is a co-inventor in 24 U.S. patents and 100 foreign patent filings related to enhanced oil recovery applications, surfactant chemistry and other technologies. Raney also is the author or co-author of 35 published technical papers, book chapters, and invited lectures.