Worldwide, new offshore project sanctioning had surpassed the $50 billion mark as of mid-July, representing yet another signal that the offshore industry has turned a corner and can reach a potential total project commitment of $123 billion in 2019, according to Matthew Fitzsimmons, vice president of oil field service research at Rystad Energy. He points out that this level far surpasses that of 2014, when committments to sanctioned projects totaled $78 billion.

In July, Saudi Aramco announced $18 billion worth of project commitments associated with the Marjan and Berri expansion projects. The Marjan expansion alone is the largest field to be sanctioned globally since 2014. Later this year, Abu Dhabi National Oil Company's Hail and Ghasha sour gas projects offshore Abu Dhabi, the Mero-2 (Libra Northwest) project operated by the Libra Consortium (Petrobras, Shell, Total, CNPC and CNOOC Ltd) in Brazil, and the feed gas systems to develop Anadarko’s Atum and Golfinho fields offshore Mozambique in the Area 1 LNG project also are expected to be sanctioned (Figure 1). 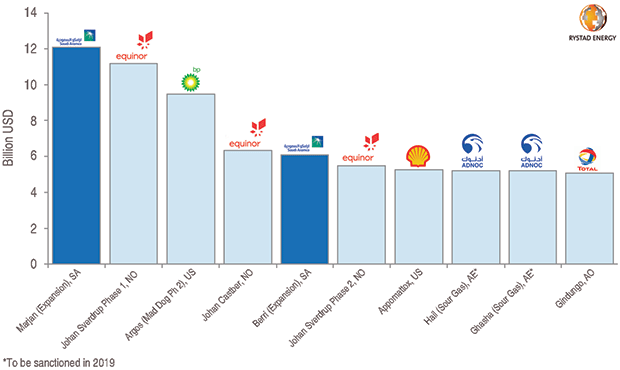 Once that happens, Fitzsimmons notes, four of the top 10 offshore projects since 2014 will have been sanctioned during this calendar year. Previously, ExxonMobil’s $4.7 billion Liza Phase 2 development offshore was the largest offshore field to be sanctioned this year.

In 2014, 74 offshore projects were sanctioned for nearly $78 billion. Total alone was responsible for $24 billion of those projects by growing its portfolio in West Africa and Brazil, he recalls. However, with the drop in oil prices, project sanctioning bottomed out in 2016 at only $37 billion of offshore projects.

Through mid-July, Rystad calculates that sanctioning volumes had reached 40% of the resources planned to be sanctioned in 2019. A handful of large projects are expected to be sanctioned by year’s end, specifically the next set of LNG trains in Qatar, the Zuluf expansion project in Saudi Arabia, and the Area 4 LNG project off the cost of Mozambique.

For the offshore industry to reach $123 billion of potential project commitments in 2019, as forecast in January by Rystad Energy, more than $86 billion of second-half 2019 commitments will require an oil price of at least $40 a barrel to break even, according to Fitzsimmons. However, projects accounting for 13% of the potential $123 billion ($16 billion) require a breakeven price of more than $60 per barrel, putting them at high risk of not receiving funding at the time of their sanctioning decisions this year, he points out.

One outcome of the increased level of offshore project sanctioning on the oil field services sector is a shifting of employment from onshore shale to offshore areas, Fitzsimmons goes on. Offshore employment headcounts have gradually increased at the top 50 oil field service companies to the point where the global offshore industry has taken the lead over onshore U.S. shale, he says.

“This is a clear effect of the increase in offshore sanctioning,” Fitzsimmons remarks, noting that Rystad Energy expects the offshore sector to sustain high levels of spending over the next five years. In fact, the company forecasts that demand for offshore services will reach $442 billion in 2025, representing a 45% increase from 2018.

Speaking at the 2019 Unconventional Resources Technology Conference in late July in Denver, Clarke said producers need to shift their focus from early production rates to longer-term well performance and production optimization as ultralow-cost undrilled locations become exhausted and productivity gains across wider sections of acreage continue to moderate. This shift is inevitable as the Permian matures and with declines rates likely to increase over time, he added.

“Individual well productivity improvements helped to offset decline rates through 2017, but those gains have weakened over the past two years. No longer do we routinely see record-setting wells,” Clarke commented. “For wells drilled so far this year in the Midland Wolfcamp, average initial production rates are down 6% and we see productivity reductions across numerous benches.”

Steeper decline rates and smaller IPs likely will result in operators needing to drill more wells than originally planned to achieve their previously established long-term targets, Clarke pointed out. “This will be especially challenging in the near-term because raising capital budgets today is effectively off-limits,” he related. “Some companies are embracing economies of scale for both rigs and infrastructure as a way to enhance well performance and improve decline rates. However, our analysis indicates this approach is more effective at cutting costs than improving production characteristics.”

The alternative to raising capital budgets and drilling more wells is to turn to M&A, Clarke said. There was a burst of asset and private-to-public deals during the 2016-2017 “Permania” period, but that has now cooled, he observed.

“We are experiencing a period of consolidation in the basin where synergies, costs and cash flow matter more than inventory. This is shrinking the number of companies that look like ideal acquisition targets,” stated Clarke. “Even with accelerated declines, the remaining number of highly economic locations supports our overall Permian growth figures for the next couple years.”

Amid low breakevens and favorable margins, producers have rapidly increased oil production, leading to a growing strain on the Permian’s infrastructure. This has resulted in the growing challenge of how to source water, and what to do with wastewater produced by completed wells, Duman explained.

“Without adequate investment and planning, produced water threatens to lower Permian production potential, as it can shift the entire Permian cost curve,” he remarked. “Water management in the Permian is becoming more expensive, in addition to slower permit approvals and the prospect of additional regulations.”

Multiwell pad developments typically result in a higher concentration of produced water in a single geography, but growing volumes of produced water are now flowing back to the surface as demand increases for enhanced completion designs. According to Duman, water midstream companies can be better placed to tackle complex and growing water-related challenges by linking operator positions and offering economies of scale to help limit operational risk at a reasonable cost.

“There is no one-size-fits-all solution. Effective water management is unique to each exploration and production company. Self-build, third-party solutions or a combination may all be ideal, depending on a wide variety of factors,” Duman said.

“The water management industry is fragmented and rapidly evolving alongside new regulations and technology,” he went on. “Private equity has entered the space and has created an opportunity for firms to address supply chain inefficiencies, offer new technologies, and take advantage of a major pain point for producers . . . The timing is perfect for water midstream firms to chase growth.”

“Permian production is ramping up, but midstream bottlenecks across oil, gas and NGLs may force a slowdown, as all three production streams are interrelated, and any midstream constraints impacting one will impact all,” Kim commented. “In particular, natural gas is becoming the weakest link that prevents monetizing growing Permian supply.”

With Permian gas production continuing to grow, the market will feel every little hiccup in takeaway capacity, and negative pricing will be a more common occurrence, he said. “Additional flaring may be necessary if construction delays translate into lower Mexican gas exports from Waha, or Permian producers may need to back down from their growth trajectory until more pipeline takeaway capacity becomes available.”

Crude oil faces a different problem, with a large overbuild of pipeline takeaway capacity between the Permian and the Gulf Coast expected in the near-term, leading to an average pipeline utilization of only 64% in 2020, explained Kim. However, he said the picture will shift by 2025, as production growth fills existing infrastructure and the average utilization moves to about 84%.

With more than 2 million barrels a day of greenfield pipeline capacity in the Corpus Christi, Tx., area expected to come on line within the next year, growing oil export volumes out of the Permian also threaten to surpass its estimated marine terminal export capacity, Kim added. “The key market impact to watch in the first half of 2020 will be whether the bottleneck for Permian producers simply moves 600 miles down the road into Corpus Christi, and congestion occurs in getting crude on the water for export,” he suggested.