HOUSTON–The Permian Basin is back in full swing.

According to the U.S. Energy Information Administration, Permian oil production has returned to pre-pandemic levels and in October is expected to surpass the previous record of just under 4.8 million barrels a day set in early 2020. Permian oil output in September was 4.78 MMbbl/d, and EIA projects that it is set to surge to 4.83 MMbbl/d this month.

Gas production across the basin is already at record highs, averaging 18.7 billion cubic feet a day, or 1.7 Bcf/d higher than in February 2020 prior to the onset of the pandemic. Over the past five years, Permian gas production has skyrocketed by a whopping 12 Bcf/d–second only to the Marcellus Shale gas play. That is enough growth to single-handedly supply the entire daily demand load for U.S. liquified natural gas exports, with a couple billion cubic feet a day to spare!

And indicators point to a continued gradual acceleration of both oil and natural gas production for tight oil plays in both West Texas and Southeast New Mexico, with rig counts inching ever-higher and frac spread counts ticking up by the week. Although still well below pre-pandemic drilling and completion activity levels, new wells completed in the basin today appear to be more productive than those drilled in early 2020.

Baker Hughes counted 267 active rigs in the Permian in mid-October. While that was substantially more rigs turning to the right than at the start of the year, it was still far below the 400-plus rigs that were running in early 2020 when per-well productivity per rig was some 400 bbl/d less. Meanwhile, inventories of drilled uncompleted wells have shrunk dramatically. Historically, the U.S. shale industry has maintained six months’ worth of completion inventory as DUCs. That soared to the equivalent of nearly four years of inventory during the 2020 pandemic. But DUC inventories quickly returned to the historic range this year with steadily rising commodity prices and the reactivations of idled frac spreads.

However, a report from Rystad Energy contends that the number of completable horizontal wells in the Permian DUC inventory is actually much smaller. Noting that more than 95% of wells are completed within 24 months of drilling, the report labels drilled wells that have been in inventory for more than two years “dead DUCs” and says the probability is low that they will ever be completed. According to Rystad Energy’s assessment, there were only 1,550 “live” DUCs remaining at the end of June, representing a 920-well decline from 2,470 DUCs in June 2020.

Fewer wells ready and waiting to fracture and bring on line means that maintaining current production levels will require producers to add rigs for future well completions, the report goes on. There is no doubt about the trend line on Permian drilling activity.

After bottoming out at 116 rigs in August 2020, Permian rig counts have climbed consistently ever since, adding roughly 100 active rigs since January. The 267 rigs running in mid-October accounted for nearly half of the total U.S. count, making the Permian far and away the most active drilling region in the country. And with WTI prices reaching seven-year highs, Permian operators have plenty of incentive to keep new production coming to offset natural depletion in tight oil reservoirs.

In its October Short-Term Energy Outlook, EIA hiked its crude oil price forecast for the next two quarters by $10/bbl. It now predicts WTI will average $78/bbl in the fourth quarter.

The December WTI contract has not expired higher than $70/bbl since 2014 and has not expired higher than $80/bbl since 2013. The dramatic increase in market-derived WTI price expectations conveys the market’s reaction to factors such as decreasing stocks and the potential for natural gas-to-oil switching this winter, with some forecasts calling for shortages in overseas natural gas markets during the upcoming heating season, EIA explains.

Not only has the agency raised its expectations for global oil demand during winter 2021-22, but it says it now expects global oil inventories to fall at a faster rate than it had previously forecast for the fourth quarter of 2021 and first quarter of 2022. 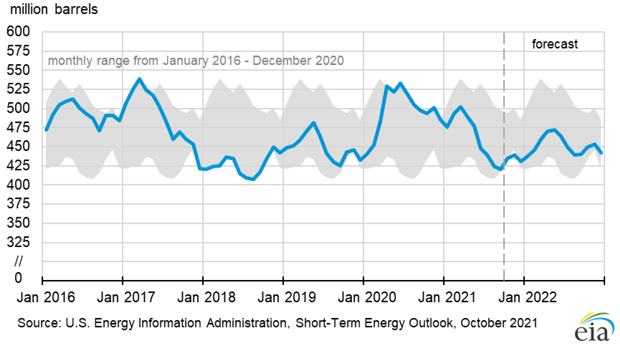 EIA estimates that U.S. crude oil inventories ended September at 420.9 million barrels, the lowest level since September 2018 (Figure 1). U.S. crude oil stocks have decreased each of the past six months, shrinking by 81 million barrels (16%) since March, the largest six-month withdrawal ever recorded since EIA began tracking weekly data in 1973.

“Furthermore, according to data in our Weekly Petroleum Status Report, crude oil stocks on Sept. 17 were 37 million barrels (8.2%) below the five-year average–the largest percentage below the five-year average since July 2008,” EIA points out. “Like domestic stocks, we estimate that OECD commercial petroleum stocks at the end of September were also at their lowest levels in more than three years.”